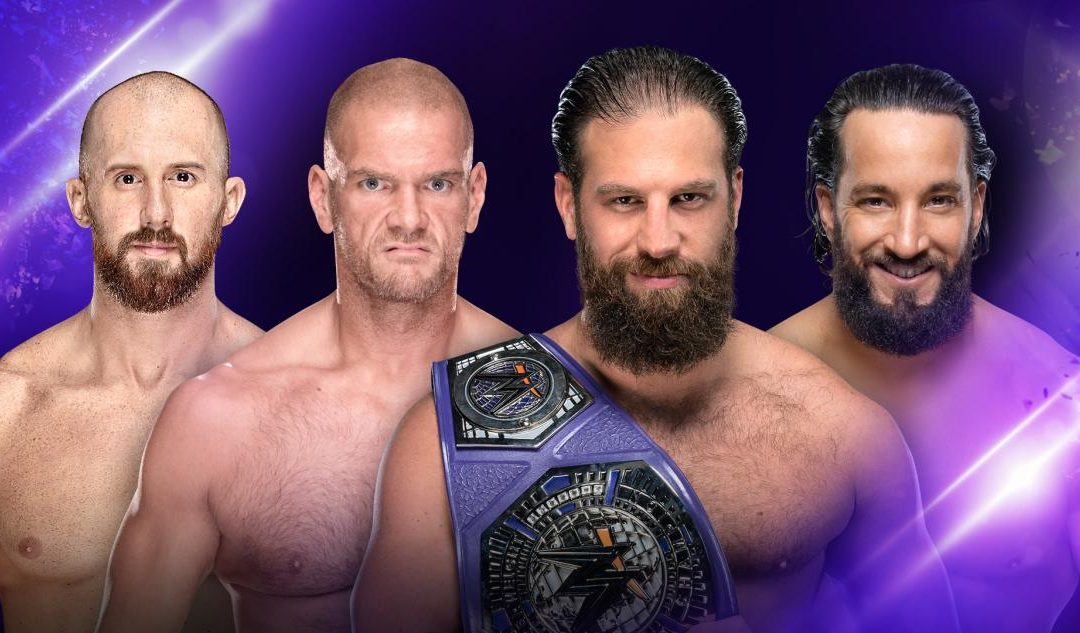 As is always seemingly the case with 205 Live, the purple headed stepchild of WWE is going through yet more change. With recent news that HHH wishes to bring 205 Live within the NXT fold as far as talent use is concerned, many were left wondering if this spelled the end of the Cruiserweight division show.

While that specific question remains unanswered, what with Smackdown Live not airing on its new home on Fox quite yet, the use and exchange of talent between both brands has been afforded the benefits of what is, in essence, a wildcard rule for the Network exclusive shows. Not only was there a Cruiserweight Championship #1 contendership match on NXT’s first live episode on USA (highlights of which open the show, followed by a pre-taped message of warning for Lio Rish by his future opponent, Cruiserweight Champion Drew Gulak). But this week’s 205 Live sees Oney Lorcan look for back up in the form of long term NXT tag partner, Danny Burch, as he vows to exact revenge on Tony Nese and Drew Gulak.

Since Nese has decided to join forces with Gulak, 205 Live has been a difficult place for anyone who dares cross their paths. Lorcan experienced this first hand in a seemingly above board singles match with Nese, only for an interference from Gulak costing Lorcan the match. Understandably, Lorcan is looking to even up the playing field with the man he trusts the most when it comes to tag team warfare. Interestingly, I believe this is also Danny Burch’s 205 Live debut. Welcome!

For those of you familiar with 205 Live, you’ll know that Drew Gulak is very much a psychological warfare guy. With Nese under his wing, his message is spreading. In contrast, for those of you familiar with Danny Burch, you’ll know he is one of the most no-nonsense wrestlers in all of WWE. All he is here to do is fight, fight, and fight some more. He has really found the best like minded partner in Oney Lorcan.

This ideal is in full display in the early portions of this match. The “BritAm Brawlers” are in full control. Burch is completely unphased with being under the purple spotlight for the first time. It takes a distraction from Nese, however, for Gulak to get any headway at all in against Burch. The sneaky tactics allow Gulak to deliver a sucker punch, well…. sucker kick, into Burch’s mid section. Nese comes in to continue the suppressing offense, but Burch quickly escapes Nese’s clutches and brings Lorcan in for the hot tag.

And a hot tag it certainly is. Lorcan comes in all guns blazing with a flurry of European uppercuts into both opponents in the corner. Again, Nese has to resort to dirty tactics to gain an advantage in the match, this time in the form of raking the eyes. That Nese can follow this up with a beautiful springboard moonsault onto Lorcan only makes his cheating that more frustrating. Lorcan mounts a comeback, but Nese knocks his head off with a big kick, then brings him into his corner to work some tandem offense with Gulak.

Gulak talks a good game, but is resorting to underhanded strategy himself, surreptitiously biting Lorcan’s head while stretching him in a shoulder lock. Lorcan manages to break free and causes Gulak and Nese to collide in the corner. But, again, Lorcan’s momentum is sapped from him. It takes a massive backdrop for Lorcan to escape the front facing headlock. Danny Burch comes in to inflict more punishment, momentarily posing for the crowd. Burch deals with Nese as Lorcan has Gulak locked in a single leg Boston. Nese looks to break the hold, but Burch catches him and locks him in a cross face. It takes pure power for Nese to hoist Nese off him and launch Burch into Lorcan and Gulak.

Burch and Lorcan are still in control, but not for long. Nese hits Lorcan with a fosbury flop, while Gulak powerslams Burch onto the mat. Nese hits the 450 from the top rope and goes for the cover, but Lorcan breaks it up in the last nanosecond.

Burch and Nese square off in the middle. Burch lands a severe headbutt in Nese’s chest. Lorcan and Burch lock eyes and literally hulk up before wiping Nese out with a Doomsday Device/European Uppercut combination. The two count is all that results from this high impact move.

Nese almost wins the match with yet another distraction roll up over Lorcan, but the Boston Brawler kicks out and answers with a huge lariat that flips Nese out of his boots. Burch rejoins his partner for their wheelbarrow – DDT finisher. Nese’s head is well and truly impaled into the mat, and is easy pickings for Burch, who could have pinned him for three hundred seconds, never mind three.

A great showing for Burch in his 205 Live debut, as the tag teams pose for the crowd after their well earned victory. These guys have always been something of an afterthought as it pertains to the NXT tag team division. Perhaps the crossover of talent could allow Burch and Lorcan to work together more often. I’ve always enjoyed their work together. Their unity. I will, however, temper my expectations with regards to ever seeing a pair of Cruiserweight Tag Team Titles.

Shortly before the main event, we get an update on Brian Kendrick laying waste to both Jack Gallagher AND his supposed friend and tag partner, Akira Tozawa. Kendrick explains to Sarah Schreiber backstage that there is an epidemic of disrespect consuming the 205 Live locker room. Instead of Kendrick being treated like a veteran, the roster are not showing him the respect he deserves. What upsets him the most is that he hasn’t had a title match in 3 years. He has more than earned his stripes. When Tozawa was apparently affected by the epidemic, that’s when Kendrick snapped. It’s about time the rest of the locker room are given a reminder what respect really is.

A nice wee mid-card story, this one. Kendrick is more relatable as a sniveling heel. I hate him and all that he says, but that just tells me he is doing a good job!

To start 205 Live this week, a wrestler who is relatively fresh faced as far as the wider WWE audience is concerned is Angel Garza. Fresh off the NXT Breakout Tournament, Humberto Carillo’s cousin has dabbled in both NXT proper and 205 Live of late, making an impact wherever his charmingly cheeky face beams. Like many before him, Garza, too has taken umbrage with Carillo’s innocent ascent through the ranks of 205 Live. This time around, rather than use jealousy as an incentive, Garza is looking to rub salt in Carillo’s wounds after his failure to clinch the Cruiserweight Championship at WWE Clash of Champions.

In a department where Carillo is sorely lacking, Angel Garza has charisma pouring off him. This was evident within minutes of his NXT TV debut.

The match is announced to us by a pair who, although don’t lack charisma, lack much that interest me at the moment. Yes. You guessed it. The Singh Brothers seem to have adopted the social commentary role the Street Profits have been performing on Raw for the last wee while. No guesses as to who does that shtick a whole lot better.

Anyway, back to the match at hand. Humberto Carillo seems to have the wind at the back of his sails. Quite literally, as he dons a cape to the ring these days. But sadly, his persona is more wooden than the planks of the ship that is seemingly sailing him towards 205 Live stardom. In a mere handful of appearances on WWE TV, Angel Garza has given me an awful lot more to sink my teeth into. Swooning fans in the front row with blown kisses. A twinkle in is eye as he squares up with his opponent. Then an explosion of aggression synonymous with those of a similar fiery spirit before him, a la Eddie Guerrero.

There is definitely a Latino heat about Garza that WWE should capitalise on. Perhaps this is why he has been afforded the opportunity of being welcomed back to 205 Live after an impressive debut a few weeks back.

With regards to the match quality, it is often the case that brothers, real life or kayfabe, fail to have a chemistry together. These two cousins on the other hand? Well, you can see they have sparred with each other many a time, for their lucha sequences together are sharp, swift, and simply splendid. As if spurred on by an unconscious worry that Garza could indeed surpass him in the popularity ranks, Carillo has extra spring in his step and meat in his strikes.

Garza has an answer for most of what Carillo has to offer, though. Garza is here to make a statement. To add insult to injury. To show the Garza/Carillo dynasty that he is the one who should have the proverbial rocket strapped to his back. His variety of dropkicks land with a notable intensity, both as offensive and defensive moves. A simple dropkick, delivered in different ways, is innovative to say the least. Vic Joseph sums up the middle portion of the match perfectly by saying this is an Angel Garza highlight reel.

Carillo eventually powers through the oft used trope, that of the heel applying a chin lock variant to slow down proceedings. Now it’s Carillo’s turn to unleash a whirlwind of kicks, elaborate arm drags, and fosbury flops. A high missile dropkick from Carillo almost puts Garza away, but the newcomer is not ready to admit defeat just yet.

Garza blocks another top rope move with a high dropkick to Carillo’s back, followed by more dropkick variations. Tazz was the Human Suplex Machine. Garza is the Human Dropkick Device!

Carillo earns another nearfall after a top rope spinning elbow. The pair take turns reversing a wheelbarrow style suplex, applying pressure into the small of the back. After the reversals, they clash in the middle after a double crossbody. The 205 Live Universe (TM) is in full song.

The impending result is hard to call. Both are delivering signature moves, but Carillo gains the upper hand as he evades a moonsault. Carillo ascends the rope and lands the Aztec Press finisher for the win. I say land, but he barely brushes Garza’s leg. This is not the first time his finisher has landed poorly. It must be changed IMMEDIATELY. You simply can’t have one of your top stars botch a finisher so often. It is one of the reasons I feel the way I do about Carillo. He is nowhere near the finished article, ladies and gents, and should be nowhere near the title picture!

All in all, another solid outing for 205 Live. This is something of a milestone moment for the show. As I write, we are no further forward with regards to news of when 205 Live will actually air. Smackdown is officially on Fox as of next Friday, but the purple brand currently has no home. Change is afoot all over the world of wrestling right now. As ever, however, there are few brands who are presented as being left in the dark as frequently as 205 Live. Perhaps more information will come from this over the next few days. But, until then, thanks for reading on possibly the last ever Wednesday write up!

Check out the latest Ricky & Clive podcast! After a far too long hiatus from proceedings, the Ricky & Clive Quiztime Invitational makes its dramatic return to the Social Suplex airwaves. 1st Round winners, Rance Morris and Rob Ropie, battle it out for a spot in the Final, prize winning match! Expect the traditional humming and hawing, the self defamatory swearing, and the awkward silences. New rounds and twists to existing rounds occur in this pivotal clash! Listen now to find out who advances.