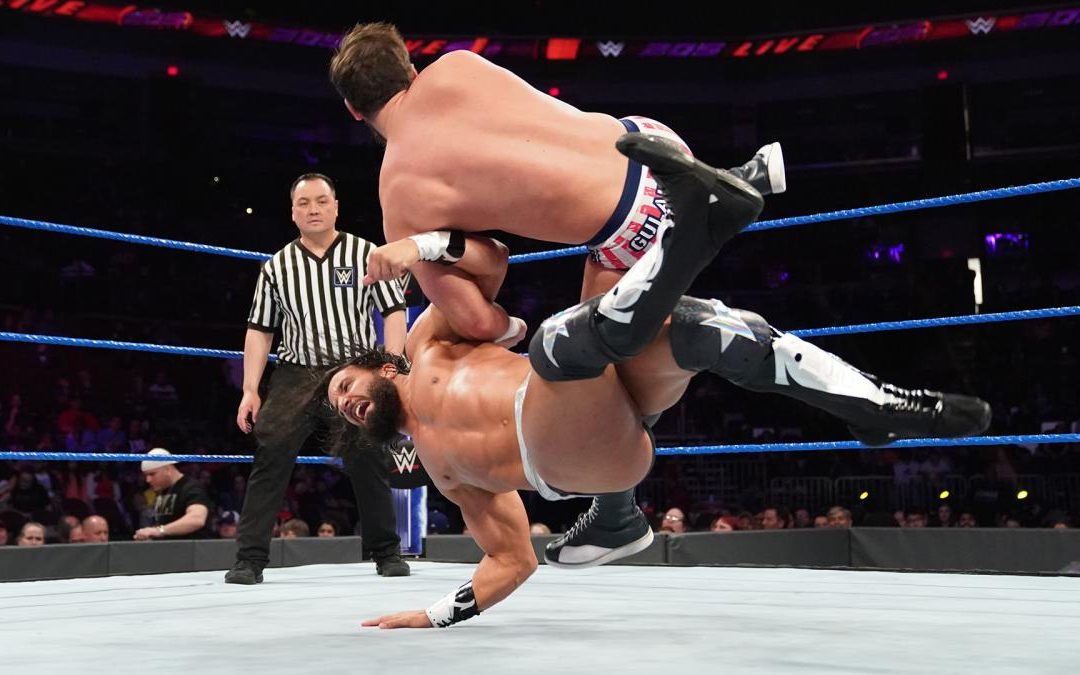 Welcome to another recap of the latest 205 Live! Cruiserweight Champion Tony Nese kicks off the show backstage. He states that he built up 205 Live, appearing in the very first match on the very first show. This is his show now. He doesn’t intend on waiting to face Ariya Daivari for the title as his next match, either. He has decided to wrestle Drew Gulak tonight.

Gulak is up next, educating us on his construction of a Better 205 Live. He will use this victory as a stepping stone to be considered in the Cruiserweight Championship scene very soon.

Now, this is interesting! Three-thirds of anything interesting out of the Jinder Mahal and Singh Brothers outfit have made their way to 205 Live. They are dressed as if The Hart Foundation conquered space millions of light years away. They address the WWE Universe, stating they have an undefeated streak on the Cruiserweight show and are looking to continue that. I’ll be honest, I have no recollection of them ever being on 205 Live so, technically, they’re correct…? Either way, a recognized tag team outfit is good to see on the show.

Dorado and Samir start the match. Unless the commentary team keeps me up to date, this will be hard to know which Singh is which, I won’t lie. Just bear with me. Dorado hauls Samir over to the corner and works through frequent tags with Gran Metalik as they take it to Samir. The assault spills to the opposite corner enough for Samir to tag in Sunil. The tandem intentions of the Singhs prove fruitless, as Dorado takes them out with a cross body.

Dorado and Metalik continue to make easy work of Sunil. Dorado continues to inflict luchador enthused punishment, and Samir isn’t happy with the treatment of his brother. He storms the ring, but Dorado pounces out and away from the arm lock and knocks Sunil out of his Tyler Breeze-looking boots.

Samir comes to Sunil’s rescue and knocks Dorado down. Sunil is in charge now and acquires the assistance of his brother to take it to Dorado. After some tags, Samir now has Dorado in a headlock on the mat. Metalik shouts “lucha” from the apron, looking to rally support for Dorado. So far, it is to no avail, this time Sunil applying the headlock.

Sunil mocks Gran Metalik on the apron with a Bollywood-esque “lucha” chant. He tags in Samir, who stops Dorado in the nick of time from making the hot tag. He eventually breaks free and leaps for Metalik. The King of The Ropes falls to the floor, however. Sunil’s heel tactics on the outside are effective.

The dirty strategy seems to light a fire under Metalik. He eventually gets the tag and performs various acrobatics around the ring as he inflicts revenge on both of the Singh Brothers. Dorado enters the fray as the action breaks down. For his sins, he eats a superkick. Metalik comes to the rescue with a springboard missile dropkick to Sunil.

Gran Metalik heads to the apron. He walks the ropes then hits Sunil with an elbow. Dorado follows up with a shooting star press and makes the pin for the victory.

This match wasn’t anything to write home about. If the Singh Brothers are to be a regular feature on 205 Live, however, it’s great to see an official two-man outfit on the show. It opens doors for new singles matches as well as tag. And, to be honest, they are mildly entertaining. Let’s just hope Jinder Mahal doesn’t become their manager!

205 Live General Manager Drake Maverick is backstage. Humberto Carillo approaches him from the side. He congratulates Humberto for his victory over Drew Gulak last week but advises him to steer clear of him going forward. Jack Gallagher comes up next. He doesn’t want to cause any trouble, saying he bears Humberto no ill will. He believes he and Humberto have some unsettled business as partners.

Singh Brothers on 205 Live? Jack Gallagher and Humberto Carillo as partners? Dare I say it, but the Cruiserweight Division tag team title rumors will start up again with creative directions like this.

Brian Kendrick looks to be coming out for a match, but Mike Kanellis blindsides him with a ferocious attack. Akira Tozawa rushes out to come to Kendrick’s aid. The melee is enough for Drake Maverick to come out and break up the brawl with the help of some additional referees. Shortly after this, it is announced that Akira Tozawa will face Mike Kanellis in a No DQ match next week. Fun times ahead!

Ariya Daivari is up next with a selfie video, bragging about still being undefeated since his return from injury. He’s next in line for a Cruiserweight Championship opportunity. He warns Tony Nese that he will be ripped limb from limb tonight by Drew Gulak. If Nese doesn’t think Ariya Daivari won’t be the next Cruiserweight Champion, he hasn’t been paying enough attention.

Always a decent outing, this match all but promises to be solid. Nese has the confidence to outdo Gulak at every corner now, and he starts proceedings accordingly with an answer for all of Gulak’s mat based game. The pair circle each other as Ariya Daivari watches the match from backstage.

Gulak and Nese roll through a series of pins before sizing each other up. A stalemate is reached. Gulak takes Nese to the corner via a collar and elbow lock up, slapping Nese’s chest hard as the referee calls for the breakup. Nese fires up from the cheap shot. A flurry of offense culminates in a Fosbury flop over the top rope to Gulak on the outside. A cover from the champion back inside and Gulak kicks out.

Nese rocks Gulak with a chop. Gulak nurses himself on the outside, but Nese follows with another chop. Gulak sneaks in a sucker punch to Nese’s gut, then drives Nese into the fan barrier. Gulak has Nese back in the ring with a unique armbar, almost a figure four on the arm. He then works on the knee with quite the intensity. Nese wriggles free out of desperation but cradles the leg. Adrenaline is surging through the champion, however, as he hits Gulak with repeated strikes. He connects with a springboard moonsault, but the landing isn’t flush. Perhaps he didn’t want to exacerbate his leg any further.

Gulak smells blood and reacts accordingly. The pair is entangled in the ropes as Gulak looks to spill Nese to the outside. Unfortunately for Gulak, both men have an ugly fall to the floor. Both superstars are out of it, and the referee starts the ten count. Gulak answers at six, but Nese hauls him back out. He strikes Gulak, then throws his head into the steel steps then the commentary table. He finishes with a stalled suplex on the floor. He drags Gulak’s body into the ring for a pin, but it only earns a two count.

Nese is in trouble as Gulak counters an incoming strike. The Philadelphia Stretcher looks for a quick victory a few times with surprise roll-up pins. Nese comes to, hitting a scoop slam for another pin attempt. Nese ascends the turnbuckle, hoisting Drew Gulak up with him. Gulak eventually powers out of Nese’s grip. He has Nese on his shoulders, then drops to the floor, hauling Nese onto his knee upon impact. A Dean Malenko special!

Gulak is in control now. He grabs Nese’s face, slapping it with some meat behind the strikes. Nese fights back with a strike of his own, felling Gulak. Nese goes for the 450 splash, but lands on the mat instead as Gulak rolls out of the way. Gulak capitalizes on the mistake and applies his Gulock finisher. Nese starts to fade, but finds the ropes with his feet, rolling through for an unsuccessful pin attempt.

Despite this being, for want of a better term, an ugly match, this was very engaging. The risks were often and great. So much so, that both men teetered on the brink of crashing and burning a few times. This only added to the drama and the desperation of both men, however. Nese may not have been defending the title tonight, but this victory over a driven and relentless Gulak will do wonders for his credibility. Gulak is definitely his own man now, too. Will he be more focused on gold in the future? One can only hope.

Our latest Ricky And Clive Wrestling Show podcast is now available for download. The second match of our Quiztime Invitational’s first round has arrived! Rey Ca$h and Kyle Moores of Chairshot Radio’s Outsider’s Edge podcast put their friendship to the side (not really) as they battle it out for wrestling trivia supremacy. Check out the other first round match here.