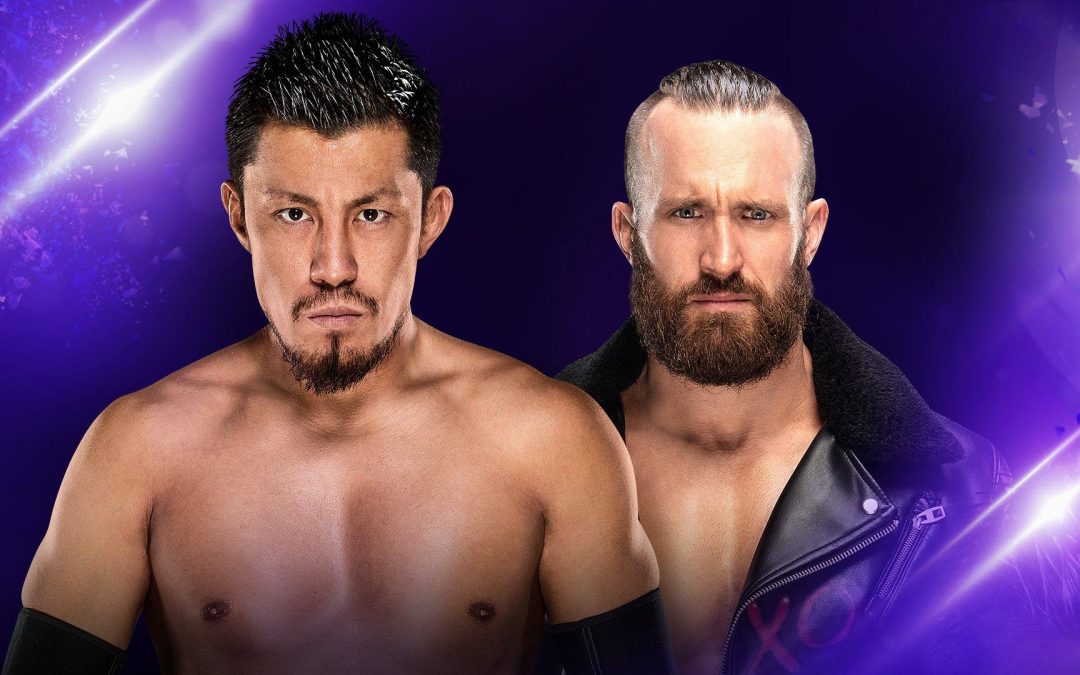 This week’s 205 Live sees the culmination of an ongoing rivalry between Akira Tozawa and Mike Kanellis. With fluke wins, distractions, and other shenanigans that have muddied the waters between both parties, a definitive winner will be crowned. Tonight’s No Disqualification Match, a reliably excellent match in the Cruiserweight show’s past, will settle things once and for all.

Maria and Mike Kanellis kick 205 Live off tonight with the introductory video. They talk about this being a sixteen year journey for Mike, and how it will lead to future Cruiserweight Championship opportunities. As usual, Maria steals the show compared to her wooden husband.

Akira Tozawa and Brian Kendrick offer their tuppence worth next. Kendrick brings up Maria interfering in three of Tozawa’s matches over the last few months. Kendrick brings up his street fight with Tozawa two years ago, highlighting what Tozawa can do with little to no rules in a match. Kendrick finishes by saying Mike is screwed. Tozawa smiles, his grin stretching the whole screen.

Vic Joseph, Aiden English, and Nigel McGuinness are the commentary team for the night. Let’s kick things off with the internet wrestling community’s favourite Cruiserweight…..!

While Daivari’s entrance music plays, we cut to a backstage moment from last week, shortly after Tony Nese defeated Drew Gulak. Daivairi squares off against Nese, playing mind games. The commentary team announces that Nese vs Daivari will be representing 205 Live at Money in The Bank.

Noam Dar is a surprise here. I remember hearing that Dar was officially moved to NXT UK and wouldn’t be appearing on the Cruiserweight show anymore. However, most internet wrestling stories should be taken with a large pinch of salt, as is evidenced here tonight!

Before the match starts, Tony Nese makes his way to the ring. With Daivari keeping watch of Nese in last week’s match, the Cruiserweight Champion is just returning the favour. Nese joins the commentary team to call the action.

The match (finally) gets underway. Dar usually cuts a confident figure. Nothing is different here in the early moments. Daivari goes on the offensive after some lockups. Dar dodges Daivari charging towards the ropes. He bends down behind Daivari, tripping Daivari up.

Daivari scurries out of the ring and comes face to face with Nese. Dar spots an opportunity for the sneak attack, but Daivari is ready with a cheap shot of his own to Nese’s nose, assisted by the edge of the commentary table. Daivari has Dar on the back foot now. The pair struggle to overcome each other in the corner, but back in the center and a sleeper variant is applied on Dar. Daivari fells him with a reverse DDT and earns a two count. A baseball slide dropkick follows, and Dar spills to the outside.

Daivari follows Dar out and, once again, has eyes only for Nese. Dar crawls back into the ring, ready for a small package pin as Daivari eventually comes back to avoid falling foul of the ten count. Now is Dar’s time to display his scrappy but clinical offense. Kicks to the legs. Elbows to the face. A northern lights pin attempt finishes the sequence, but Daivari kicks out.

Dar trips Daivari up expertly, locking Daivari’s ankle. Daivari wriggles free. Daivari goes for his hammerlock lariat, but Dar dodges. Dar goes for a penalty kick and Daivari dodges. The blocks continue for a short spell before Daivari hits a superkick out of nowhere.

A Persian (frog) splash from the top from Daivari. He hauls the finished Dar to his feet and destroys him with the hammerlock lariat. He hooks Dar’s leg, and the ref counts to three.

Daivari is celebrating in the ring until Nese storms the ring. Daivari is caught off guard, but Nese doesn’t attack. He wants Daivari to know that he could get him any time. He didn’t this time, but he could if he wanted. Some nice role reversal from Nese, who was on the receiving end of the same words last week. This is a nice build to the two’s Cruiserweight Championship match. Daivari is playing the mind games, but Nese is mentally strong. So far. Nese’s character continues to grow depth by the week.

Oney Lorcan is backstage next. He talks about losing his first Cruiserweight Championship opportunity two weeks ago. But it won’t be his last. He’ll fight harder than anyone to get back to the stage of getting another chance. And when that chance comes, he won’t waste it.

Samir and Sunil are back on 205 Live for the second week in a row. This time, some local talent are their opponents. There’s no guessing as to how this match will go, but it’s a good use of the tag team. Keep the new faces fresh in the viewers’ mind is the order of the day, it would seem.

In between the easy offense, Sunil dishes out to Kenneth Lee, some Bollywood dancing enthused taunting takes place. Kauffman tags himself in, but fairs no better. Sunil tags in Samir, who makes easy work of Kauffman with an elbow drop for the win.

Sunil takes the microphone after the match. He mentions the Lucha House Party ruined their return to 205 Live last week. They want a rematch with all three Lucha House Party members. They drop their microphones and dance some more. The crowd boo appropriately. Some typical heel heat for the pair. Good stuff!

205 Live General Manager Drake Maverick walks up to Mike and Maria Kanellis backstage. Maria thanks Drake for barring “that cheater” Brian Kendrick from ringside for the match tonight. Maria guides Mike to Gorilla, but Drake stops them. In order to respect the integrity of this match (Maria’s words first), Drake bans Maria from ringside also. I have to say, she really should have seen that one coming!

Some graphics come up throughout the show showcasing matches for next week’s 205 Live, which will be part of the traditional Spring WWE UK tour. Earlier, we had the announcement that Tony Nese will take on Ligero. Now we have the confirmation of a Fatal 4-Way between Mark Andrews, Jack Gallagher, James Drake, and Humberto Carillo.

Sarah Schreiber is backstage with Jack Gallagher, asking Jack what’s at stake for the match next week. Jack responds by saying he’s grateful that he’s medically cleared to wrestle in front of his fellow compatriots. He bigs up his opponents individually. Humberto Carillo comes up next. He wants to finish what he started and beat Jack in London. All seems friendly between the two, but Jack seems concerned as Carillo walks off.

Historically, hardcore matches in all their forms on 205 Live have been thoroughly enjoyable. Tozawa has been in some of these matches and has been on a tear as far as performances go in 2019. I may not be Mike Kanellis’ biggest fan. However, when he brings his temper to a match, it is probably when he is at his best.

The match starts frenetically. Tozawa unleashes all of his frustrations on Kanellis. He charges up the ramp, launching Kanellis into the stage set. They head back towards the ring, but not before Tozawa applies the octopus stretch. Kanellis powers out of the hold. He sidewalk slams Tozawa right onto the metal of the ramp.

Kanellis is now wasting no time. He lifts up a ring apron, throwing chairs into the ring and hauling a table over to where Tozawa is nursing his back. Kanellis sets up the table. Tozawa musters up a comeback, but Kanellis hits him with a scoop slam onto the floor. He brings yet another table out, propping it up flush with the original table.

Tozawa fights back again. Kanellis wards him off, throwing him into the ring. Kanellis approaches but takes a hurricanrana from Tozawa. The momentum spills Kanellis to the outside. Tozawa follows up with a suicide dive headbutt attempt, but Kanellis is waiting with a devastating superkick. Kanellis drags the battered Tozawa back into the ring, hitting several suplexes and bringing the pace of the match back down to normal.

The chairs thrown into the ring earlier are propped up now. The chairs face each other. Kanellis looks to suplex Tozawa, but Tozawa blocks it. Tozawa swings Kanellis round and goes for the suplex, but Kanellis, too, blocks it. This continues for various counters before Tozawa finally gets the upper hand. He drives Kanellis through the chairs. He keeps charging with a shining wizard, and Kanellis ends up on the outside.

Tozawa plops a trash can onto Kanellis’ head. Tozawa heads into the ring and flies back out. The suicide dive headbutt rocks Kanellis, but Tozawa undoubtedly took a significant portion of pain from that move also. Both men are back in the ring now. Tozawa with a missile dropkick. A pin attempt, but Kanellis kicks out at two. Tozawa brings the trash can into the ring, setting it up dead center. He goes for a German suplex through it, but Kanellis blocks. He has Tozawa up on his shoulders. He flips him off, planting Tozawa through the trash can. The pin attempt only reaches two, however.

Both men are hurting. All they can do is throw chest chops at each other. Tozawa screams adrenaline back into his system. They now trade high kicks. Tozawa feigns a left jab, grabbing Kanellis and delivering a snap German suplex. Tozawa slowly climbs the turnbuckle, looking for his finishing senton bomb. Kanellis charges the corner with an uppercut, felling Tozawa from the top.

The pair end up on the apron, swapping strikes. Tozawa ducks a clothesline, locking Kanellis in for a stalled German suplex onto the apron. Ouch! “This is awesome” chants ring out from the crowd.

Kanellis finds himself on the pair of tables. Tozawa looks to repeat the senton bomb that finished off Brian Kendrick in the aforementioned street fight, but Kanellis crawls off. They’re now both high up on the turnbuckle. A superplex is on Tozawa’s mind. Kanellis has other ideas, however, managing to get Tozawa up onto his shoulders.

Tozawa spots an opportunity. A fantastic one at that. He hurricanranas Kanellis off the turnbuckle. He drives Kanellis and himself through the tables on the outside. Very innovative and quick-thinking of Tozawa. He takes Kanellis into the ring, placing numerous chairs onto the prone Kanellis. He climbs to the top. The senton bomb through the chairs onto Kanellis is the final nail in the coffin. The referee counts to three, but could easily count to ten if he wanted.

While Maria comes down to check on her husband, Brian Kendrick joins Tozawa in the ring to celebrate, as 205 Live goes off the air.

An emphatic victory for Tozawa tonight in what was yet another fantastic hardcore match on 205 Live. Definitely one to remember in the end of year top matches lists. I’m not wanting to be an entitled fan or anything, but can we just get hardcore matches on 205 Live every week, please?

Our latest Ricky And Clive Wrestling Show podcast is now available for download. Back from last week’s Quiztime Invitational episode, Ricky and Clive took to Twitter once again to canvas for questions about all things WWE! Topics include reshaping the TV product and some of its wrestlers, part timers in Saudi Arabia, record breakers, and Dean Ambrose/Jon Moxley. We finish with an “unpopular heels in WWE” quiz.