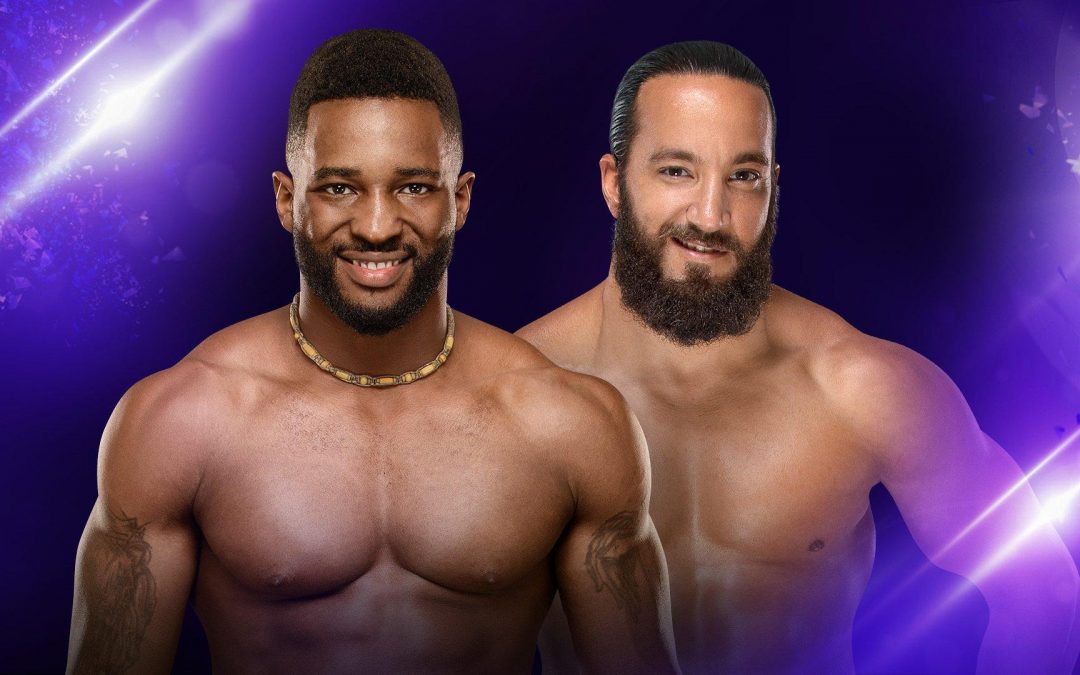 Before going into 205 Live proper this evening, it would be remiss of me not to mention the Smackdown Live “debut” of Mustafa Ali as he took on WWE Champion, Daniel Bryan. You and I know that Ali is a special individual. 205 Live may not get the exposure it possibly deserves. Plus, there is always the fear that our favourites won’t get the opportunity granted to them on the main roster that they have had for a long time on the WWE Network exclusive brands. However it’s hard not to feel a moment of pride for Mustafa Ali on Smackdown Live last night. Congratulations, sir!

Moving onto tonight. General Manager Drake Maverick hypes the Cruiserweight Championship match between Buddy Murphy and Cedric Alexander at TLC this Sunday. In preparation for these matches, Maverick has selected opponents for each wrestler to face on tonight’s 205 Live.

The first match will see Buddy Murphy take on Gran Metalik. This is a strange one. Simply because it was announced on last week’s show that Murphy would be taking on Noam Dar. However Dar was not cleared to compete, and Metalik was more than willing to step in as a replacement.

In the main event, Cedric Alexander will take on Tony Nese, a man who has been a thorn in the former Cruiserweight Champion’s side since the very early days of 205 Live.

Both men go into this match cold, what with the unfortunate news regarding Noam Dar. Embroiled in other more personal feuds, there isn’t much hype for this one but, considering the acumen of those involved, I don’t doubt the quality upcoming!

Murphy forces Metalik into the corner with a face-palm after an initial collar-and-elbow. The current champion has a swagger about him of late, despite his pinfall at the hands of Alexander some weeks ago. He takes that cockiness into tonight’s match, but Metalik is accomplished in the luchador style. His escapology is on full flamboyant show.

That defensive strategy quickly becomes attack minded, as the King of The Ropes vaults over the top onto Murphy on the outside. With Murphy reeling, Metalik tight-walks the barricade and wipes out Murphy with a Hurricanrana.

Back in the ring, and Murphy repeatedly attempts to gain the upper hand, but Metalik swats those advances away. The Cruiserweight Classic finalist jumps from the top rope, but into the waiting arms of thee Juggernaut of 205 Live. A stalling suplex halts any momentum Metalik may have garnered.

Metalik crawls back into the ring after the referee counts to seven. However Murphy is in control. Metalik’s left shoulder is taped up, and Murphy’s homes in on the target with heavy elbows. The Lucha House Party member tries with little conviction to break from Murphy’s grasp, but to little avail. It does however take an incoming Murphy for Metalik to deliver an enziguri to get back into the match. A springboard cross-body sees him on top for the first time. A series of high impact moves earn him a two-count.

A Metalik Driver is thwarted on two separate occasions by the Cruiserweight Champion. After a back and forth however, Metalik is playing possum and finally locks in his finisher. This isn’t enough, however. Another two-count is all that comes of it.

Brute force is what Murphy is synonymous with. He dodges Metalik who spills to the floor, and the Champion crawls out and drives Metalik onto the commentary table, and then onto the apron with a snap backdrop.

Back inside, and Murphy has a rare moment on the turnbuckle with a Meteora, but only a near-fall takes place. The near-falls come thick and fast now. Many high impact signature moves just aren’t enough to topple each other, despite the already-high octane match on offer.

Murphy is the first to shake off the exhaustion. He almost falls victim to a school-boy roll-up, but Metalik take springboards off the ropes afterwards and lands snugly into a Murphy’s Law. The Cruiserweight Champion earns a victory for a good confidence boost heading into TLC this Sunday.

The commentary team of Vic Joseph, Percy Watson, and Nigel McGuinness show replays of Drew Gulak defeating Jack Gallagher last week. Backstage this week, Akira Tozawa looks to support a seemingly inconsolable Brian Kendrick. Drake Maverick comes up to announce that next week will see Tozawa and Kendrick face off against Gulak and Gallagher in a Street Fight.

Maverick brings up the Street Fight between these two men last year. Kendrick laments the position of his moral compass since he appeared in 205 Live, promising that he is a changed man. Tozawa seems to have a lightbulb snap on above his head. Tozawa mentions that, although he may be a changed man, he still looks the same. After Tozawa “fires” maverick, Vince McMahon style, for his loss of the Raw Tag Team Titles this Monday, they walk off the screen.

The Submission Commision (Gulak & Gallagher) are up next, addressing the WWE Universe. They excuse their behaviour and betrayal of Kendrick as an attempt to save Kendrick. They say the Street Fight is a perfect stipulation. When the two teams get in the ring, for the final time, Gulak warns that whoever steps to him will tap out.

An advertisement announcing Lio Rush, a busy man on Monday Night Raw just now, will return to 205 Live next week.

In another backstage segment, Ariya Daivari is being interviewed, asked for his actions of late which suggest his aligning with Hideo Itami. Daivari says wrestling used to be simple. It was never meant to be flashy or pretty, slagging wrestlers who don superhero costumes as part of their attire.

Hideo Itami appears next, congratulating Daivari on his brutal beat-down of the enhancement talent last week. They shake hands and walk off screen.

Tony Nese is almost the sole man responsible for bringing out some character in Cedric Alexander. For that, Nese should be commended. It’s also refreshing to see Nese in more of a spotlight on 205 Live, what with his partnership with Cruiserweight Champion, Buddy Murphy. Here’s hoping for a match similar in quality to their previous outings!

After winning a lock-up. Alexander mocks Nese with a curled bicep pose, earning a “Let’s Go Cedric” chant from the crowd. Nese seems to be lapping it up however, reversing a wrist lock into one he is in control of. Alexander attempts some flashy offense, but Nese is on point, seemingly having scouted Alexander over recent weeks.

Alexander gains the upper hand with a sudden dropkick to an incoming Nese. He takes Nese to the adjacent corners and lights up his chest with some loud chops.

Nese tries to worm his way back into the match, and eventually does so with an open palm strike to Alexander who is a split second away from vaulting off the ropes. Nese whips Alexander into the corner with enough force to even fell himself. The pin attempt afterwards isn’t a long one though.

Nese’s hands have become competent weapons in this match. A rapid chop to Alexander’s throat. A guillotine of Alexander’s throat onto the ropes. Nese is slowly but surely adding to his repertoire with great effect.

The Premier Athlete has Alexander grounded in the ring with a rear-scissors lock. Alexander fights out and tries to reverse momentum. the former Champion is walloped with a clothesline for his efforts however. Just like the previous matches between these two, Nese has Alexander’s number!

Nese goes for another open palm strike, but Alexander dodges, and floors Nese with a Flatliner. Alexander is returning the earlier favours with his own series of heavy duty strikes. After kicking a prone Nese in the head whilst running the apron, Alexander finally delivers his springboard clothesline for a two-count.

Alexander continues the onslaught, locking in a high impact move. What looks like a clear victory only ends with Nese kicking out. The bewildered look that Alexander wears of late when all he musters isn’t enough is plastered on his face. Nese spots the crack in the veneer and capitalises with a series of attacks.

Alexander with a roll-up attempt, but Nese reverses it into a pin attempt of his own. The match is reaching its climax as the exchange of huge offense is readily supplied.

A Neuraliser by Alexander finally lands after several tries. He follows up with a Lumbar Check for the victory.

Considering Nese played a major part in Alexander’s crisis of confidence, a win over that regular thorn in his side will do his frame of mind wonders ahead of Sunday.

Alexander celebrates in the ring, but not for long as Buddy Murphy makes his way out to the ramp. Alexander is pumped and ready for a fight. Murphy answers with a sprint to the ring. Both men scrap on the floor. Murphy falls to the outside and receives a somersault for his troubles.

The Juggernaut of 205 Live considers rushing the ring again, but decides against it to a chorus of boos, instead holding the Big Purple aloft.

A hard prediction to call, this match on Sunday. I still feel that Alexander’s heel-turn is a slow burn, so I’m going for a Murphy win at TLC. Regardless of the outcome however, the bleeding in of the 205 Live roster into the more mainstream consciousness is a good one, and the two involved representing the Cruiserweights is, for me, victory enough.

Check out the latest episode of latest podcast of “The Ricky & Clive Wrestling Show“. Ricky & Clive give their preview and predictions for the last WWE event of an… interesting year of PPVs in 2018. The stories going into this Sunday aren’t near their creative best but, on paper, the match quality leads us to believe a decent night of wrestling is on the cards…..We finish with a TLC themed quiz.