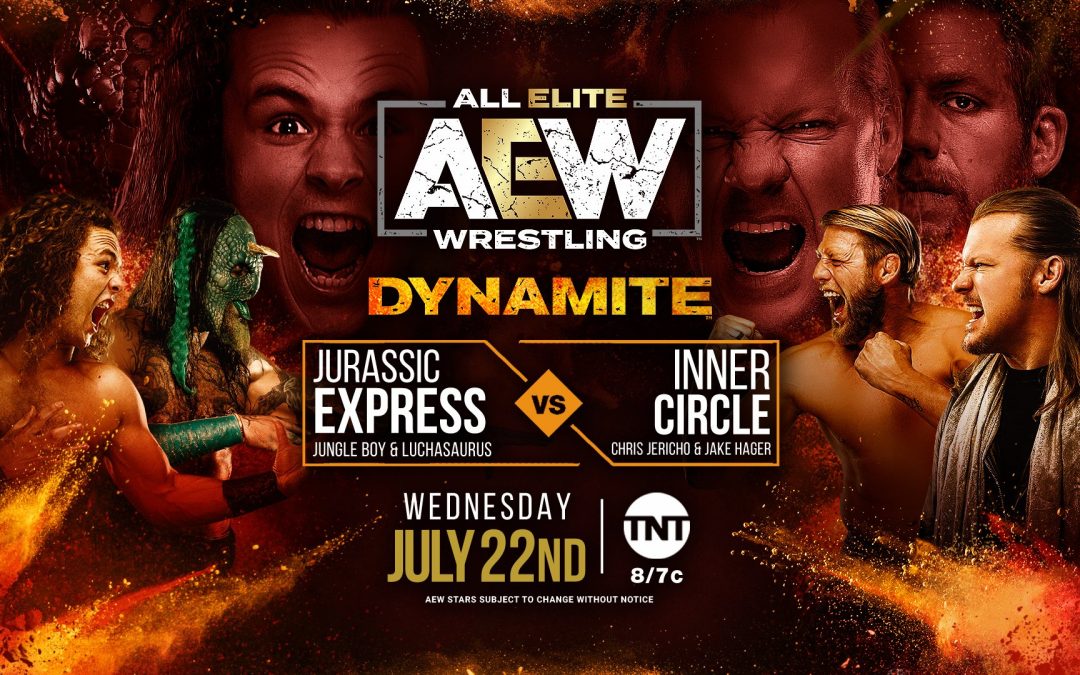 Fight for the Fallen is in the books and now we start the road to All Out 2. This week’s Dynamite looks to be another action-packed night. Let’s take a look at AEW Dynamite Preview for July 22, 2020.

It’s no secret that the AEW Women’s division has taken a big blow due to COVID-19 travel restrictions and injuries. With several of the top women out of action, this creates an opportunity to bring in new talent. The current reigning AEW Women’s World Champion, Hikaru Shida realizes she needs new challenges and has thrown the gauntlet down.

The champ @shidahikaru is ready for any challenge #AEWDynamite pic.twitter.com/TqqrCGXMxA

This week we’ll be seeing the AEW Dynamite debuts of Diamante and Ivelisse. Both women have worked AEW shows in the past, but this will be their biggest opportunity to show the world what they’re made of. A win here can lead to more Dynamite opportunities and an AEW contract. I’ve been a big fan of Ivelisse’s work for the last few years. She’s a really good wrestler that could add some depth to this division. I haven’t seen much of Diamante, but her reputation precedes her. No matter who wins I think it would be a smart move for AEW to sign both of these women.

The last time we saw MJF and Wardlow was at night one of Fyter Fest where they lost to Jurassic Express. We saw a lot of miscommunication between both men in that match. It’ll be interesting to see how much longer Wardlow can put up with the arrogance of MJF. MJF will be looking to keep his singles undefeated streak going. I’m sure the “salt of the earth” will also have plenty to see about what’s next for him.

Before I talk about this match, I have to give a shout out to the Dark Order. They’ve been hilarious every week on Being the Elite. One of the skits actually plays into this match. A couple of weeks ago on BTE, Brodie found out that Hangman filled out an application on the Dark Order website and that his team never followed up with Page. Brodie was furious and smacked Silver and Reynolds in the face with papers.

Mr. Brodie now has the opportunity to right that wrong and impress Hangman with the ways of the Dark Order. Five, also known as Alan Angels, has been undefeated since joining the Dark Order. Pre-Dark Order, Five had a good showing against Hangman’s partner Kenny Omega. This should be another good outing for him.

I think this match will be used to set up a tag title match for Evil Uno and Stu Grayson. Uno and Grayson are undefeated as a team this year and are currently the number one ranked tag team. Before the pandemic, it seemed like they were building to Uno and Grayson versus Page and Omega. If the Bucks are going to be busy with FTR at All Out, I think Uno and Grayson will be a great choice to face the champions at the pay-per-view.

Last week Jon Moxley successfully defended his AEW World championship against Brian Cage. I’m sure Mox has some thoughts on how the match ended and what happened after it.

Falls Count Anywhere:
The Butcher & The Blade vs. The Young Bucks

After Double or Nothing, The Butcher and The Blade have had their eyes set on the Young Bucks. A few weeks go they attacked the Young Bucks. The weeks following that attack they’ve found themselves involved in the frenemy rivalry between the Bucks and FTR. Two weeks ago, The Butcher and The Blade were on the winning side of a wild eight man tag against the Bucks and FTR.

The Young Bucks’ last Dynamite two on two tag victory was on the June 11th episode. Matt and Nick need to pick up a big win here to get back on track. With this being a Falls Count Anywhere match, I’m expecting a wild crazy brawl filled with plunder. I have this one circled to be the match of the night.

It seemed like the business relationship between Taz and Brian Cage was on the rocks after Taz threw the towel in. However, based on what happened on this week’s episode of Dark, it looks like they’re back on the same page. After Darby Allin’s match on Dark, he was attacked by Cage. As Darby tried to fight off Cage, Ricky Starks slid in the ring and helped Cage destroy Darby. It looks like Taz is starting to form his own stable. We’ll get an update on this whole situation tomorrow night.

Last week was Cody successfully defended the TNT title against Sonny Kiss. With that victory, Cody is now up to five successful defenses. Cody’s opponent this week has not been revealed. There is a ton of speculation of who could be stepping up to challenge. Tony Khan tweeted earlier today that Cody would be defending against one of the top independent wrestlers in the world.

Tomorrow night on #AEWDynamite, @CodyRhodes will defend the TNT Championship against one of the top independent wrestlers in the world! It’s part of a huge card and what I promise will be a great episode of #AEW Dynamite tomorrow night on TNT at 8pm ET/7pm CT! pic.twitter.com/y3F77zKYXp

I know there a lot of people who want to see War Horse be the one the answer the challenge. To be honest, I’ve never seen a War Horse match and have no interest in seeing him challenge. When I think of top independent wrestlers on the scene right now one name that comes to mind is Chris Hero. Hero was released from WWE earlier this year. Since his release, he teased that Chris Hero was back. Hero was one of the best wrestlers in the world. He was not utilized properly during his NXT run and it’s hard to tell if he’s still a top-level performer. Even if he has lost a few steps I think he would be a great person for the challenge and could have a good match with Cody.

The newly christened “Demo God” Chris Jericho didn’t have a good Wednesday night last week. Jericho and the Inner Circle were given an orange juice bath by Orange Cassidy. Jurassic Express found it hilarious and made fun of Le Champion backstage. Tomorrow night, Jericho will get a chance to take out his frustrations on Jurassic Express.

Jurassic Express had an impressive performance against The Elite last week but came up short. This week they’ll be looking for more than just a great performance. A victory here would be a big upset and would catapult Luchasaurus and Jungle Boy up the tag team rankings.