Best of the Super Juniors 26 Night One Review 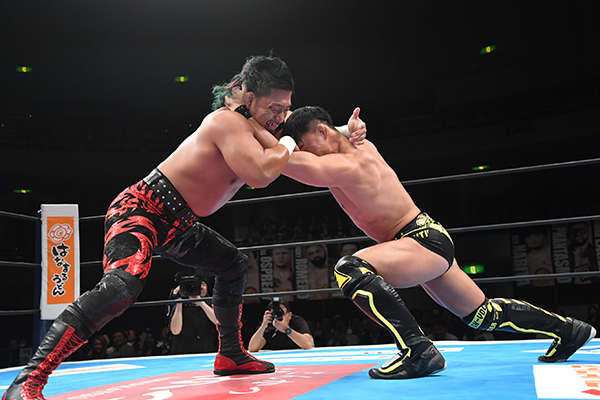 Night one of the Best of the Super Juniors started off with a banger.  There were a total of 5 matches, Taka Michinoku vs Tiger Mask, Titan vs Yoshinobu Kanemaru, Marty Scurll vs Jonathan Gresham, Shingo Takagi vs SHO, and Dragon Lee vs Taiji Ishimori.

Tiger vs Taka was exactly what you would expect it to be. Being the least interesting match of the night, this was a pretty short match that was pretty mediocre. The match quality wasn’t great as both men are moving pretty slow.

However, the storytelling was not bad. Of course, Taka acted like the complete jackass that he was meant to be, but the real narrative was with Tiger. They played him off as being extremely good for his age(which he most certainly is) and had a bad knee, which Taka mainly targeted. Tiger eventually overcame the odds and pinned Taka but this knee could come into play later.

Kanemaru vs Titan was another fairly mediocre match. Neither of these men looked particularly special.  Kanemaru or as I like to call him the drunken uncle who spews bullshit at Family Gatherings attacked in usual Suzuki Gun like style, before the bell.

They set Titan up as a guy who spends 90% of the match getting his ass kicked and then he attempts the flash pin out of nowhere. Unlike the last match which at least made an attempt to play off of Tiger’s age and injury, had practically no storytelling. Not that it needed too as most likely these two guys won’t be involved in any feuds going out off this tournament.

This match was a fairly decent match, nothing special but better than the last 2. Gresham was portrayed as a technical wizard, but he didn’t go for that many submission holds this match. The most notable one was an ankle lock that he got Scurll in near the end of the match.

There were a lot of rollups in this match. Scurll looked decent. I thought the crowd would be a lot more excited for Scurll but they didn’t seem too interested. Overall okay match, could have been better but could have been much worse.

The fourth match of the night and mine and many others’ favorite match Shingo Takagi vs SHO. This was a very, very, and I cannot stress this enough very good match that I absolutely loved. This was a hard hitting match that showcased the absolute best of the Dragon Shingo Takagi and SHO.

SHO came out to a new entrance. The English commentary played Takagi up as the favorite to not only win the tournament but to also go undefeated. This was a brutal strong style match that really brought out the best in both of these men. SHO was played kind of like an Underdog. Not like Rey Mysterio Underdog levels, but nonetheless and Underdog. Shingo and Sho traded dozens of clotheslines, lariats, forearms, etc. Numerous times in the match WHO tried to knock Shingo down but was unable to.

For every brutal forearm SHO gave Shingo, Shingo chopped him so hard he was sent flying. For every lariat attempt SHO tried, Shingo hit a straight right that knocked the shit out of him. This match ended with a pumping bomber followed by a Last of the Dragon. Overall outstanding match with an outstanding story that had been building up during the Dontaku tour.

No disrespect to these two men but Takagi and SHO should have been the main event. This was a good match that played off of their last encounter at Dontaku, but compared to the semi-main event this match looked mediocre. Ishimori and Dragon Lee looked decent.

Personally, I felt like this match was bad compared to their previous encounter. Personally, I don’t see the need to have these two matches on the same night. They should have spread them out so both of them could have shined.

Overall good show I’d rate it 7/10. SHO vs Shingo carried, everything else was either average or slightly above.