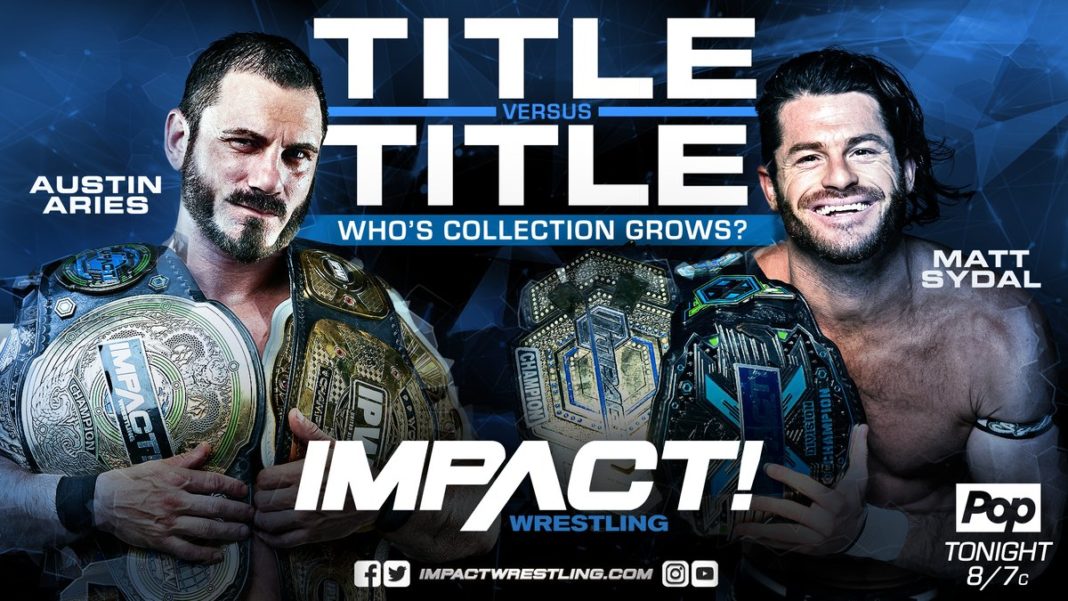 Thank you all for reading this again, and I’m going to level with all of you readers out there, yes even YOU. I’m still getting my legs under me in this column game. I’m going to warn you all that you’re most likely going to see a DRASTIC change in column format starting with this week’s edition of the Impact Report. While I have you here I will NOT be doing an Impact Report next week because me and THE SOCIAL SUPLEX BOYZ will be in New Orleans experiencing WrestleMania week. I will say that you can expect to see a Supercard of Honor preview from myself posted EXCLUSIVELY on this very website by Wednesday, April 4th at the latest.

Now let’s get onto the fun stuff and enjoy this week’s edition of Impact on Pop! The show started with an “earlier this week” video where Impact World Champion Austin Aries runs into Impact X Division Champion Matt Sydal & Impact Grand Champion Josh Mathews. Matt taunts Austin about Option C and says he would never give up his title. Austin then goes onto say if Matt is so gracious to put the Grand Championship on the line, he can face A Double for the World Championship. Much to the chagrin of Josh Mathews, Matt Sydal accepted. Overall this was well done and I loved every bit of what Josh had to offer during this segment, also Matt Sydal seems to be coming a long way as a heel and I can dig that.

Petey Williams vs Suicide vs Rohit Raju vs Taiji Ishimori

The first match of the night sees PETEY WILLIAMS taking on SUICIDE, ROHIT RAJU, and TAIJI ISHIMORI in fatal four-way X Division action! I must say that I really dig the theme music of both Suicide & Ishimori. This was full of fast and furious action as is most X Division affairs. At one point in the match, Petey actually attempts to unmask Suicide but is cut off by a plancha from Raju, which is then followed up with a moonsault to the outside by Ishimori. I just NEED to say that the athleticism of Taiji Ishimori cannot be understated, his 450 Splash is second to none. Whoever is under the Suicide mask (Caleb Konley?) is very talented. The match comes to an end after PETEY WILLIAMS lands the Canadian Destroyer on SUICIDE. This was an absolute solid X Division match.

After a commercial break, we are shown an ELI DRAKE interview with McKenzie Mitchell. Eli did a very good job of putting over the world championship in this segment, which of course is not the championship he won a briefcase for. This segment was done solely to further express Eli’s disappointment at getting the tag title briefcase, however, at the very end, Eli alerts us the viewer that he just got an idea. That has me PUMPED up. We now cut to EDDIE EDWARDS in Dayton, Ohio. “Sami you say, Ohio versus everything, and that’s fine because here I am.” – Eddie Edwards

Our next match sees AMBER NOVA taking on “The Undead Bride” SU YUNG in her in-ring debut at Impact. I really like what Su has going on here, especially her sideways stagger to the ring. I’m sure this is exactly what she’s going for but in all her makeup and with her long black hair Su Yung looks exactly like the bad girl from The Ring. This match lasted all of about a minute and ”The Undead Bride” SU YUNG was the victor.

After the match JOHNNY IMPACT is being interviewed by McKenzie Mitchell and explains that he along with every other wrestler in the locker room has the same goal: become world champion. ”The Zombie Princess” JIMMY JACOBS then shows up and says Johnny has no clue what Jimmy’s goals are here. Johnny then mentions that Jimmy isn’t impressing anyone with his “cute” emo haircut. Jimmy says that Johnny lives in a bubble and that bubble is about to burst. “I’m a princess, and I always get what I want, oh and Kongo Kong says hello.” – Jimmy Jacobs

Back from commercial and we are shown TAYA VALKYRIE putting herself over while walking around the studio. After an odd repositioning of the camera, we see ROSEMARY following Taya on an elevated platform with a trash can in hand. Rosemary then throws her trash can at Taya and initiates a brawl with “Lucha Royalty.” Taya gets the better of Rosemary initially but is admonished by Dick Justice, who she strikes to back off her. Amber Nova shows back up trying to restrain Taya but is attacked for her troubles. Taya goes to grab Rosemary from the wreckage but is hit with red mist for her troubles. Rosemary takes the opportunity to climb back to the top of the platform and land a crossbody on Taya and all the bystanders conveniently gathered around Taya. This backstage brawl was very well done, and I appreciate that this feud is being burned VERY slowly, those of you that watch Lucha Underground aren’t surprised but Taya is very good at being a heel.

After the brawl, we cut to WrestlePro and we are being treated to a singles match where FALLAH BAHH is taking on KM. As expected, not much doing in this match. Fallah Bahh is very much over in front of this Brooklyn crowd. The most noteworthy happening in this match was the fact that KM won after a roll up and using the ropes for leverage. Is a heel turn incoming for Fallah Bahh? I’d be curious to see it.

After a commercial, we’re getting to see the well-built singles match of BRIAN CAGE against BOBBY LASHLEY. This will most likely be Cage’s first extended singles match on Impact during this run. The video package and the commentary team did an EXCELLENT job of making this feel like a big fight. Early on Cage has the advantage much to the well-sold shock of Lashley. Both these titans are wrestling like cruiserweights and I will never not be shocked by the skill of both men. The story of this match has been one of the king being exposed by a young lion, similar in storytelling style to that of Reigns/Undertaker from WrestleMania 33. Even when Lashley is getting offense in he looks desperate. At one point, Cage steals the spinebuster into the float over cover from Lashley for a near fall. Surprisingly the end of the match comes with a discus lariat from BRIAN CAGE on LASHLEY for the pin and the win.

After commercial ALLIE comes to GAIL KIM for advice and Gail does a very good job of putting over Allie as a legitimate threat in this segment. Allie takes the advice of Gail and goes to find Su Yung. After a retro rewind ELI DRAKE comes to MOOSE in the back and Eli offers to trade Moose cases. Eli tries to trick Moose into switching by using the logic that two belts are better than one. Moose outright says no and offers Eli a Case versus Case match. “Why do we have to fight?!” says Eli Drake and Moose responds by telling Eli to think about.

We go back to Dayton, Ohio and EDDIE EDWARDS is at Rockstar Pro Wrestling and even assaults the gatekeepers at the arena. Eddie is beating the tar out of every unfortunate soul who dares to cross him in the ring. SAMI CALLIHAN takes the bait and shows up with a bat in hand. After fighting off the Crists, Sami charges the ring but Eddie gets the better of Sami. After the Crist Brothers attack Eddie, they set him up to take another bat shot from Sami, but Eddie lands a kick to the groin at the last second. Eddie has the advantage for a minute and takes the Crist brothers to task again, but Sami eventually gets back up, cheap shots Eddie, grabs his bat and hits Eddie in the jaw. oVe lays over the carcass of Eddie Edwards and the Ohio crowd celebrates along with the entire Rockstar Pro locker room. That’s one thing I really liked about this. It felt like Austin in Canada or Rocky in Russia, and while Eddie’s character is a stand-up guy, he’s not a hero to Ohio wrestling fans like Sami Callihan.

Early in the match, we are shown a split screen with the other screen showing ALBERTO EL PATRON watching this match in the back while eating a steak of course! As was expected this match features a lot of solid back and forth. Truthfully it took awhile for me to get into Josh Mathew’s work as a manager, but I’m enjoying it here lately. Late in the match, Austin is setting up for a move from the top rope when Josh interferes in attempt to distract him which brings out PETEY WILLIAMS who had stated earlier in the night that he would be cashing in his X Division title shot at Redemption on April 22. Sydal goes for a shooting star press but Austin gets his knees up. The finish comes when AUSTIN ARIES lands a brainbuster on MATT SYDAL for the pin, the win, and the Impact Grand Championship. Add that to A Double’s collection of championships!

Thank you all for reading this week’s edition of The Impact Report and God bless you. You can follow me on Twitter @BTB_CMB. Please subscribe to Social Suplex Podcast Network on whatever app you use to listen to podcasts, and subscribe to this very website to read some excellent chew from a guy like me, vape from a guy like Brian “Clive” Kinsella, and smoke from guys like Rich, Jeremy and the rest of THE SOCIAL SUPLEX BOYZ.