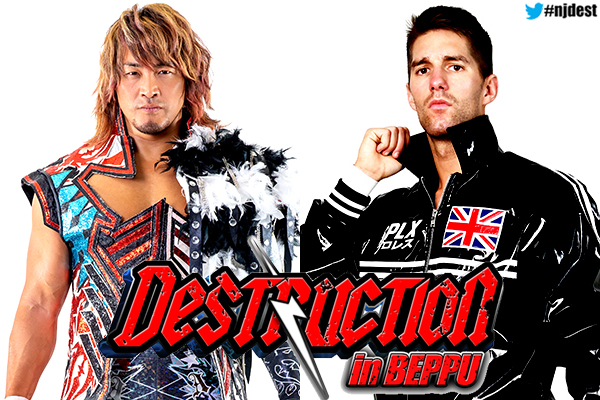 Hey folks! I’m back with predictions and a preview for the first of three big Destruction shows, Destruction in Beppu.

Our first match is one of many Young Lion Cup matches that is happening throughout the Destruction tour. This match has the two big men of each Dojo facing off as Tsuji takes on Fredericks. This should be a decent hoss match with Fredericks getting the big win here. Prediction: Fredericks picks up the win.

The second Young Lion Cup match features Shota Umino and Alex Coughlin. These two faced off during the Super-J Cup tour with Coughlin getting the win. Can Coughlin upset the Senior Young Lion again or will Umino pull off the victory? Prediction: Umino picks up the win.

Next, we have a match that will have previews for upcoming Young Lion Cup matches between Narita and Richards, and Uemura vs Connors. Taguchi, Nagata, Nakanishi, and Henare are there to bring some experience to each team. Expect a decent match and for the young lions to go all out but also to take the fall. Prediction: Team Nakanishi wins with Henare pinning Uemura.

The fourth match on the card sees the legendary Jushin Thunder Liger team with Roppongi 3K to take on Suzuki-Gun. The feud between Liger and Suzuki has heated up again at the last Korakuen Hall show. Suzuki attacked Liger when he was on commentary and hit Gotch Style Piledriver onto a chair. So expect those two to brawl away while Roppongi 3K and Kanemaru/DOUKI do a decent Junior affair. Prediction: Team Liger wins with SHO pinning DOUKI.

Here we have a preview for two matches for the following night. Birds Of Prey (Will Ospreay and Robbie Eagles) take on Ishimori and ELP for the IWGP Junior Heavyweight Tag Team Championship and Ibushi defends his G1 Briefcase against the current NEVER Openweight Champion “Whole Hoe” KENTA (shout out to Rich Latta). This should be a fun match with lots of shenanigans ahead. Prediction: Bullet Club wins with Fale pinning Honma.

The following is another preview match with the IWGP Champ teaming with Hirooki Goto and Rocky Romero to take on his KOPW Challenger SANADA, Shingo Takagi and BUSHI. Goto and Shingo are getting prepared for a match in Kobe during this tour. This match should be another solid tag match with SANADA hoping to show Okada that his last win over him was not a fluke. Prediction: L.I.J win with Shingo pinning Romero.

Yet another preview of Kobe’s main event between IC Champ Tetsuya Naito and Jay White. EVIL has been on a hot form since the G1 picking up several pinfall victories. Prediction: L.I.J picks up the win with EVIL pinning Chase.

The first of two title matches on this card sees G.o.D taking on the CHAOS duo of Tomohiro Ishii and YOSHI-HASHI. G.o.D has had an impressive run as IWGP Tag champs with successful defenses of the belts against EVIL and SANADA, Most Violent Players, Nicholls and Robinson and most recently Aussie Open.

This rivalry began when G.O.D interfered in the NEVER Openweight title match between Ishii and KENTA. Ishii and YOSHI-HASHI issued a tag title challenge on the first night of the Korakuen Hall show after their team was victorious in a six-man tag against G.o.D.

This is not the first time these two have challenged G.O.D. Ishii and YOSHI-HASHI failed to win the belts from G.o.D in 2016 at Power Struggle. For YOSHI-HASHI it is a chance to finally get a title around his waist. He has had 14 Title matches to try but has failed. At 37 he is not getting any younger.

It would make for a good feel moment for him finally getting a title in his 11-year wrestling career. Can he and Ishii upset the dominant Tag champs or will G.o.D prove why ain’t nobody realer than guerilla? Prediction: G.O.D Retain the Tag Belts with Tanga Loa pinning YOSHI-HASHI.

The main event sees The Ace Hiroshi Tanahashi defend his newly won RevPro British Heavyweight Championship against the former champ Zack Sabre Jr. This feud has been going for quite a while with their first match being in 2017 in the G1 Climax.

This year they’ve had 4 singles matches. Tanahashi is 3-1 against The Submission Master with their last match being at Royal Quest where Tanahashi shocked everyone and won the Title off ZSJ. But now with RevPro allowing rematches will ZSJ claim back his prize or will the ace ride off into the sunset once again? Prediction: ZSJ picks up the win via Submission

That’s all! For more Destruction preview check out the latest episode of Keepin’ It Strong Style. Expect my Destruction in Kagoshima preview to be out soon. Until then see ya!!!!