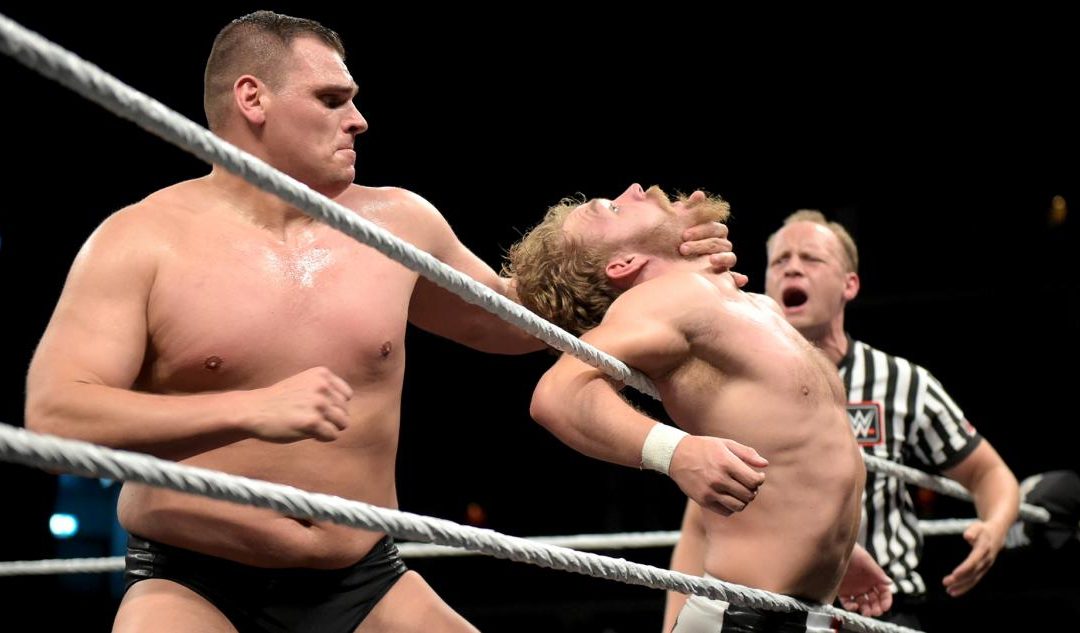 Jeremy: I am not a big fan of Noam Dar. I would have rather seen Jordan Devlin or Pete Dunne in this spot. Despite my dislike for Dar, the crowd was invested in the match. It ended up being a very good opener. However, I think this match could be done on TV and been a fine little TV main event. ***½

Clive: It’s no surprise that the match with the most underwhelming build is the least memorable for me. Neither wrestler screams “Takeover” caliber for me. Their match would have been more than acceptable on TV, but there are other guys who have put in better work more deserving of the spotlight. A decent work rate match, but no more. ***

Ricky: This match was not Takeover worthy, more so Banks being on the card larger than Noam Dar, however, it was a solid opener and nothing more. ***

Jeremy: This was a great hard-hitting affair. Dragunov looked great in defeat and Cesaro came off like a huge star. Cesaro once again showed us his freaky strength with a Cesaro Swing that lasted until the count of 40! Cesaro gets the win with a pop uppercut and a jumping Netrualizer. I would love to see Cesaro have a run in NXT UK and face guys like Bate, Dunne, and WALTER. ****

Clive: This definitely got me more in the mood for the Takeover. The star attraction of Cesaro, whose might and mettle is there for all to see, versus a newcomer to NXT UK with a wiry strength reminiscent to his opponent’s. These guys put on what would have been a brilliant curtain jerker. The strength and speed displayed by both men were excellent, and Dragunov looked great up against Cesaro. That low aiming sprinting uppercut should be Cesaro’s finisher: brutal! ****

Ricky: At first, I was slightly disappointed it was Dragunov facing Cesaro as I hoped it would be Devlin.  Once the match began, those feelings quickly faded and what we were treated to was a physical, hard-hitting affair. Myself and Clive have watched Dragunov live and we were both impressed so it was no surprise to me how well he done in this match and in pushing Cesaro, he showcased his ability to a much wider audience.  And, Cesaro is one of the best in ring wrestlers in the world and he continues to remind us of this. ****

Jeremy: I really loved this match. The hometown boys Andrews and Webster were super over. The Welsch crowd was living and dying with every move this team made. The near falls in this match were excellent. There were three or four spots that I could sworn were going to be the finish. The rough blew off the building when FMW and MAndrews got the win and became the new NXT UK Tag Champions. I’m looking forward to a rematch between Grizzled Young Vets and the news Welsch champs. ****½

Clive: I’ve said it before and I’ll say it again. NXT UK has the best tag team wrestling in all of WWE right now. This combination of standard-bearers in GYV, regulators in Gallus, and aerially exciting home turf favourites in Andrews & Webster gave us a hotbed of strategy, brute force offense, and some of the most last gasp nearfalls you’ll ever see. The crowd was on fire throughout, adding to the frantic energy this match had, and the deafening pop for the first Welsh champions in WWE history gave this a very special feel. ****¾

Ricky: Takeover always produces great tag team matches and this one stands up with any of them. The Vets and Webster & Andrews were heavily focused and Gallus was sprinkled in enough throughout the match and were made to look like they were the powerhouses in this match.  The layout and story of the match were beautifully told. I’m not the biggest fan of Webster and Andrews but the hometown pop once they win the titles was a moment in itself. ****½

Jeremy: Rich Latta, James Boyd, and I have a theory that it’s hard to have a bad Last Man Standing match. This match wasn’t great LMS ever but it was a decent plunder brawl with two bruisers hitting each other with everything in sight. The match had a hot start with Mastiff rushing Coffey during his entrance. Coffey retaliated by whipping Mastiff so hard into the corner that it broke the turnbuckle. They spent the remainder of the match brawling on the outside throughout the crowd. I was not a big fan of ending and came off very main rosterish to me.  ***½

Clive: I got literally everything I wanted from this match. From Mastiff charging back up the aisle towards a chain-in-hand(!) Coffey to kick things off, to Coffey using brains over brawn to win the brawl, these two big burly bastards knocked seven shades of shit out of each other, with a more than satisfying amount of weapons used and furniture demolished to show for it. An outstanding effort from both men that accentuated their positives in equal measure. ****½

Ricky: What more do you want from a Last Man Standing match?!!  Physical, hard-hitting, brutal affair. Nothing quite matches up with 2 heavyweights trading big blows with one another and this had it all.  It started the way a bitter feud should start and that was before the bell and outside the ring. The chair spot in the crowd when both ran at each other with chairs and collided along with the camera work in that spot was perfection. I don’t like making the loser of a match look strong in order to protect them but the finish of this match was perfect.  Mastiff looked like a monster throughout the match and Coffey, in the end, outsmarted him rather than overpowering him. ****¼

Jeremy: I was expecting more from this match especially after comments from Toni saying that she plans on stealing the show. The crowd didn’t seem invested in the match. It probably didn’t help that this match followed a wild plunder brawl. These ladies did nothing bad, but nothing great either.  ***

Clive: Not a blow away match by any means. But the story leading up to the match, that of Kay Lee Ray dismissing Storm as hopeless and a pretender, was told throughout the match. Storm had some offense, but Ray was too overbearing and had an answer for everything thrown at her. The risky high spot from Ray was too much for Storm to handle, and she never looked to doubt herself once. An extra .25 stars for the fact we have another Scottish woman holding gold in WWE! ***¾

Ricky: Solid match, nothing more I’d say.  The build to this match especially with Kay Lee Ray’s promo about Storm’s family leaving her was classic heel and you follow up the weeks of Ray goading Storm with a clean win.  I think the next step for Toni Storm is NXT. ***

Jeremy: Incredible. Abosulety Incredible. This was the match I was looking forward to the most this weekend. This match not only met my expectations but surpassed it. There were so many elements that made this match excellent. It was your classic David versus Goliath story. WALTER using his huge size advantage to bully Bate. Throughout the match there were a couple of callbacks to the Bate injury angle that was done on NXT UK TV. Bate incorporating moves from Pete Dunne and Trent Seven was great. The crowd was firmly behind Bate and tried to will him onto victory. The closing stretch was amazing. I lost my mind when Bate kicked out a 1 after the powerbomb. WALTER finally puts the big strong boy away with a huge lariat. This is easily a match of the year contender and one of my favorite matches of the year.  *****

Clive: It’s matches like this that put to bed the tired and outdated opinion that “vanilla midgets” shouldn’t be allowed to play in the big boys’ park. Tyler Bate soaked up a hell of a lot of visually jaw-dropping punishment but gave as good as he got with ridiculous feats of strength and resolve. Bate looked like a star here, and the tease that he might defeat WALTER was very strong. A great advert for the NXT UK brand. The want by HHH, however, to have epic-length matches headline his Takeovers is personally unnecessary. This lacked a certain urgency that WrestleMania weekend’s shorter Pete Dunne vs WALTER bout had that may have given this one all the stars. ****½

Ricky: Great match and the selling of his back by Tyler Bate throughout the match was great storytelling.  A match that had everything you could have wanted, high spots, selling, hard-hitting and overall great wrestling.  The only black mark against this match was it may have gone 5 minutes too long and I was not a fan of Tyler Bate kicking out at 1 from the powerbomb after receiving so much punishment throughout the match.  I felt Gargano kicking out of big move after big move against Adam Cole when he won the NXT title was too much and I feel the same way about the kick out at 1 from Tyler Bate. A contender for match of the year though. ****¾