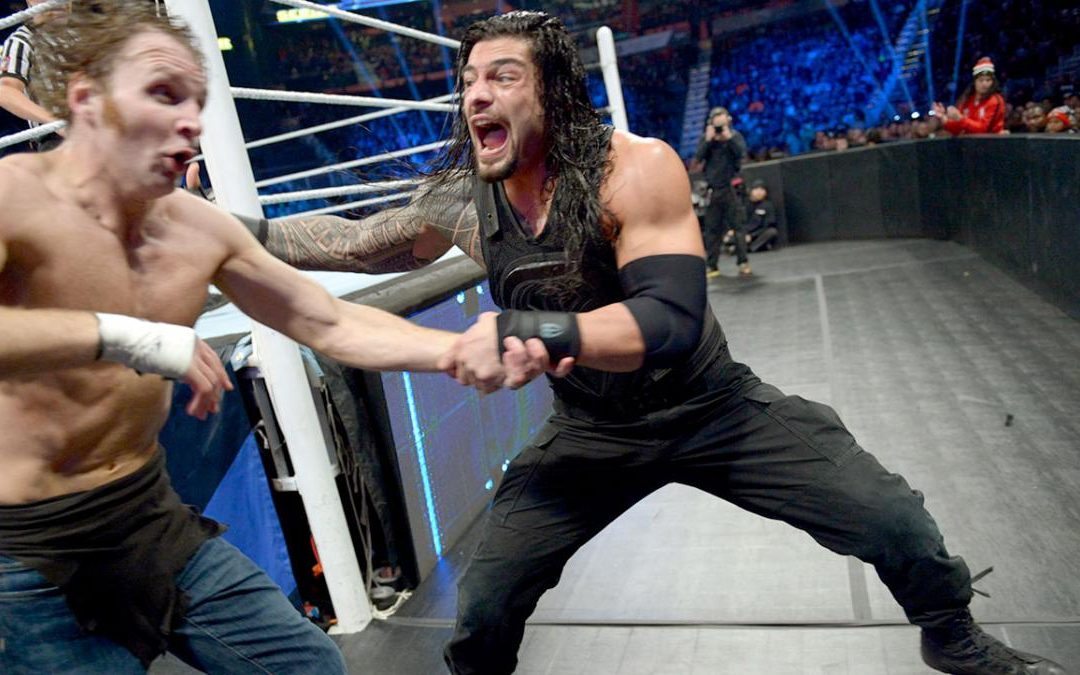 Welcome back to the WWE Fantasy G1 Climax Tournament. If you’re new to the series you catch up on the previous matches in the archives. Night 13 of the tonight will feature round 7 of the Raw block. Here are the rankings going into round 7:

On Night 11, Cesaro had Sheamus in his corner to watch his back in case Luke Gallows and Karl Anderson decided to get involved. Unfortunately for Cesaro, this backfired as it was Sheamus’ involvement in the match that brought Gallows and Anderson to ringside to help Finn. Gallows and Anderson used their numbers advantage and helped Finn beat Cesaro. Tonight Cesaro is leaving Sheamus in the back which may not be a smart move considering The Miztourage and Maryse will be lurking around the ring. The Miz was unable to use his numbers advantage to defeat Roman Reigns on Night 11. With only two wins this far in the tournament, The Miz is not likely to win the Raw Block. However, a win tonight will derail Cesaro’s chances of winning.

Match Highlights: Before the bell rings The Miz, Axel, and Dallas jump Cesaro. Axel rips the tape of off Cesaro’s ribs. All three men stomp on Cesaro’s ribs. Maryse comes in and digs her high heel into Cesaro’s ribs. The referee tries to get The Miztourage out of the ring. Sheamus makes a beeline to the ring. Sheamus Brogue Kicks Dallas. Miz throws a clothesline at Sheamus. Sheamus ducks and Brogue Kicks Axel. Miz hits the Skull Crushing Finale on Sheamus. Miz turns to the referee and tells him to ring the bell now. The referee rings the bell and starts the match. Miz turns around and is hit with a big European Uppercut. Cesaro locks in the Sharpshooter and Miz taps out.

As mentioned earlier, Gallows and Anderson helped Balor secure a win against Cesaro. This is the second time that The Club has interfered and helped Finn win. Finn continues to deny that he’s affiliated with them. Balor once again has asked them to stay out of his business. Bray Wyatt has failed to get a victory in the tournament. With only a few nights left, it is mathematically impossible for Bray to win the Raw Block. Even though Bray can’t win, he can be a spoiler. Tonight he will attempt to spoil Balor’s chances of winning.

Match Highlights: The bell rings and Wyatt goes to the outside. Wyatt comes back in and they go to lock up but Wyatt smacks Balor. Balor stares him down and goes to work with kicks and punches. Finn keeps control and drops Wyatt with quick strikes. Wyatt goes to the outside again. Balor runs and hits a running baseball slide. Balor goes on the barricade and jumps off. Wyatt catches him and Urnages him to the floor.

Wyatt rolls Balor back into the ring and hits a running Senton for a near fall. Wyatt starts working on Balor’s left leg. Wyatt drops several knees to the leg. Wyatt drags Balor to a post and goes to the outside. Wyatt drives Finn’s left leg into the turnbuckle several times. Wyatt goes backs in the ring and locks in an Indian Deathlock. Balor goes to the rope for a break. Bray picks Balor up and attempts a leg breaker. Balor fights out and drops Wyatt with an overhead kick. Wyatt rolls outside of the ring to the apron. Balor goes to the apron and hits a Slingblade. Balor rolls Bray back in the ring. Balor attempts Bloody Sunday, but his leg gives out when he tries to lift Bray. Bray attempts Sister Abigail. Balor counters Sister Abigail with a School Boy for a near fall. Balor hits a PK with his right leg for a near fall.

Balor goes to the top rope but hesitates to hit the Coup De Grace because of his left leg. Wyatt uses that second of hesitation to get up and attack Balor. Wyatt hits a Superplex for a near fall. Wyatt attempts another running senton, but Balor rolls out of the way. Balor attempts Bloody Sunday again. Wyatt blocks and pushes Balor down. Balor gets back up and Wyatt quickly hits a cross body block. Wyatt turns upside down again. Balor hits a one legged dropkick while Bray is upside down. Balor successfully hit Bloody Sunday and gets the win. After the match, Anderson and Gallows come out and raise Balor’s arms. They offer to help Balor to the back. Balor refuses their help and limps to the back by himself.

In the last round, Seth Rollins suffered his first loss of the tournament against Braun Strowman. Not only did Rollins lose, but he sustained further damage to his neck. The WWE Medical team advised for Rollins to forfeit the remainder of his matches in the tournament. Rollins refuses to listen to the doctors and plans to finish out the tournament. Neville picked up a big upset victory in the last round against Dean Ambrose. Neville can’t win the Raw Block, but he can regain his pride by finishing the tournament with ten points. Neville has to win tonight, Night 15, and Night 17 to accomplish this.

Match Highlights: Both men lock up and start chain wrestling. After a series of exchanges, they come to a stalemate. They lock up again and Rollins gets Neville in a headlock. Neville pushes Rollins off to the ropes. Rollins bounces back and hits a hurricanrana. Neville lands on his feet and hits a hurricanrana of his own. Neville follows up with a one legged dropkick to Rollins’ head. Neville drops several vicious knees on Neville’s neck. The referee checks on Rollins and asks if he wants to forfeit. Rollins says no. Neville hits a standing Shooting Star Press for a near fall. Neville kicks Rollins out of the ring. Rollins gets to his feet slowly. Neville hits a Shooting Star Plancha and wipes Rollins out.

Rollins attempts the Ripcord Knee again. Neville ducks the knee and hits a Snap Dragon Suplex for a near fall. Rollins is in a lot of pain. The referee checks on Rollins and says he’s going to stop the match. Neville says “I’m not winning that way!” The referee argues with Neville about the condition of Rollins. While they’re arguing Rollins pulls himself up with the ropes. Neville charges at Rollins, but Rollins hits a jumping knee. Rollins follows up with the Avada Kedavra for a near fall. Rollins picks up Neville and hits the Ripcord Knee. Rollins takes a long time to get to a cover. Neville kicks out at two. Rollins tries the Ripcord Knee again. Neville fights out and hits a Tiger Suplex. Neville quickly locks in the Rings of Saturn. Rollins is not responding and the referee stops the match and awards the match to Neville.

Match Highlights: The bell rings and Braun challenges Joe to knock him down. Joe bounces off of the ropes and hits a shoulder block. Braun barely moves. Joe tries again and Braun moves a little bit. Joe makes a third attempt with no luck. Joe tells Strowman to try and knock him down. Strowman bounces off of the ropes. As Strowman runs in, Joe drop toe holds Strowman. Joe quickly hits a running senton to Strowman’s back. Joe goes for a pin and Strowman kicks out at one. Joe mounts Strowman and punches him. Strowman puts hands up to block. Joe grabs Strowman’s right arm and attempts to lock in a cross arm bar. Strowman picks Joe up while Joe is still holding on and powerbombs him for a near fall.

Strowman attempts a running splash but Joe moves out of the way. Strowman gets up to his knees and Joe hits a Shining Wizard for a near fall. Joe attempts to lock in a single leg crab. Strowman pushes Joe off. Joe is up quickly and attempts to lock in the Coquina Clutch. Strowman fights out and hits a big clothesline. Joe rolls out of the ring from the impact. Strowman follows Joe outside the ring. Strowman charges at Joe. Joe dodges and Strowman runs into the post. Joe locks in the Coquina Clutch. Strowman picks up Joe piggy back style and runs backward into a barricade to break the hold.

Dean Ambrose has had a rough tournament. In the last round, Ambrose was ambushed by Neville before their match. At the end of the match, Ambrose was pushed through a table and fell victim to the Rings of Saturn. Ambrose now has to face his former Shield brother Roman Reigns. With pretty much one arm, Roman was able to fight through the shenanigans of the Miztourage and Maryse and was able to defeat The Miz. Roman’s shoulder is still not 100%, but with only one loss Roman is so close to winning the Raw Block.

Match Highlights: Both men fist bump before the bell rings. The bell rings and both men lock up. Roman pushes Ambrose down. Ambrose gets back up and locks up again. Roman pushes Ambrose down again and flexes. Ambrose gets up and pretends to go in for a lock up instead Ambrose kicks Roman in the stomach. Ambrose hits a series of punches, chops, and kicks. Ambrose bounces Reigns off of the ropes. Roman attempts a clothesline. Ambrose ducks and clotheslines Roman over the top rope. Ambrose hits a suicide dive and wipes Roman out. Ambrose rolls Roman back in the ring.

Ambrose goes to the top rope and nails a missile dropkick for a near fall. Ambrose starts working over Roman’s injured shoulder. Ambrose drops several elbows on Roman’s shoulder. Ambrose locks in a Fuji Armbar. Roman fights up to his feet and breaks the arm bar with a sidewalk slam. Roman picks up Ambrose, points to his shoulder and says “are you serious brother?”. Ambrose slaps Roman. Roman fires up and drives  Ambrose into the corner. Roman hits a series of clotheslines to Ambrose in the corner. Roman sits Ambrose on the top rope. Ambrose kicks Roman in the face and jumps off of the top rope and hits an armbar takedown for a near fall. Ambrose picks Roman up and throws his shoulder into a post. Ambrose gets Roman out of the corner and attempts a shoulder breaker.

Ambrose picks Roman up and throws his shoulder into a post. Ambrose gets Roman out of the corner and attempts a shoulder breaker. Roman wiggles out and headbutts Ambrose in the back of the head. Roman bounces off of the ropes and clotheslines Ambrose in the back of the head for a near fall. Roman gets Ambrose up for a Samoan Drop. Ambrose fights out and attempts Dirty Deeds. Roman blocks and pushes Ambrose into the ropes. Ambrose bounces back with a rebound lariat for a near fall. Ambrose goes to the top rope and attempts the Lunatic Elbow. Reigns counters with a Superman Punch.

Roman goes for the Spear. Ambrose kicks Roman in the shoulder as he charges in. Ambrose hits Dirty Deeds for a near fall. Ambrose attempts to hit Dirty Deeds again. Roman blocks it and counters with a palm strike. Ambrose charges at Roman but Roman catches him with a Samoan Drop for a near fall. Roman hits the Spear, but Ambrose kicks out at two. Roman attempts a Crucifix Bomb but Roman’s shoulder goes out and he collapses with Ambrose. Ambrose hits Dirty Deeds again and gets the victory.

Here are the rankings after round 7:

Here are the match ups for the last four nights of the tournament:

Night 17 – 9th Round of Raw Block: Seth Rollins vs. Finn Balor, Dean Ambrose vs. Braun Strowman, Roman Reigns vs. Cesaro, Bray Wyatt vs. Neville, and Samoa Joe vs. The Miz.