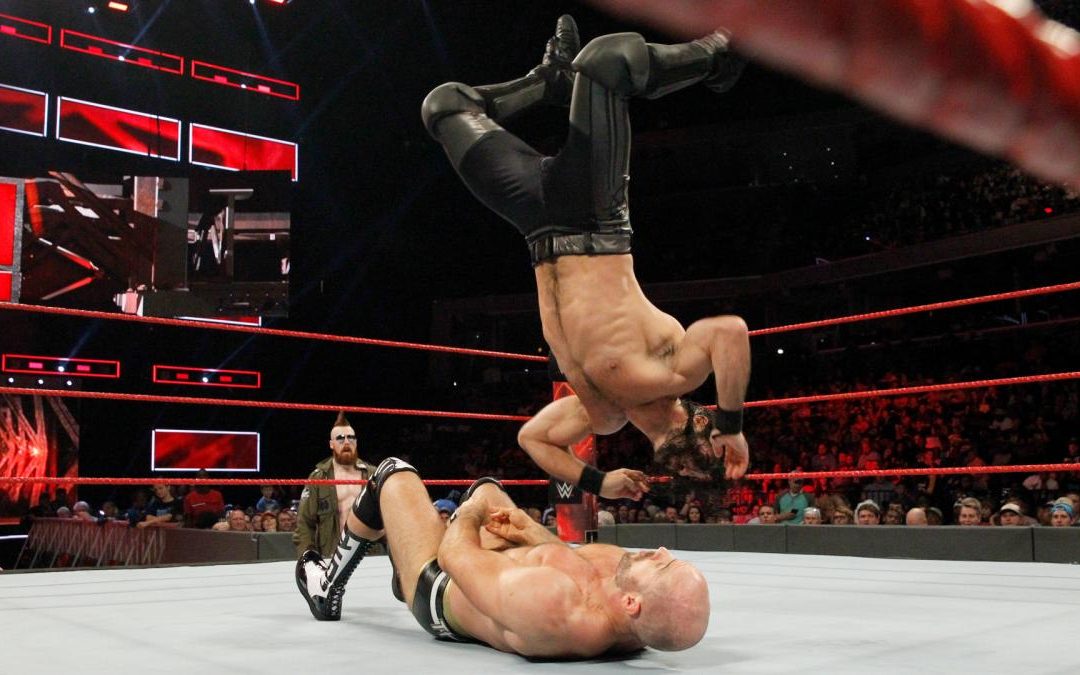 Welcome back to the WWE Fantasy G1 Climax Tournament. If you’re new to the series you catch up on the previous matches in the archives. Night 15 of the tonight will feature round 8 of the Raw block. Here are the rankings going into round 8:

In the last round, Dean Ambrose scored a big upset victory over his former Shield brother, Roman Reigns. With a record of 3-4 Ambrose needs to win tonight and on Night 9 if he stands any chance of winning the block. Beating Samoa Joe tonight also helps considering Joe is tied for first place. In the last round, Joe was unable to defeat Braun Strowman. Joe is still in a great position to win the tournament. All he needs to do is defeat Ambrose tonight and The Miz on Night 17. This is a must-win match for both men.

Match Highlights: The bell rings and both men start exchanging strikes. Joe gets the upper hand and knocks Ambrose down to one knee with a big forearm smash. Joe bounces off of the ropes and attempts a running strike. Ambrose pops up and hits a Lou Thez Press and nails Joe with several punches. Joe rolls out of the ring. Ambrose bounces off of the ropes and attempts a suicide dive. Joe catches him and hits a big Uranage. Joe follows up with a running senton. Joe rolls Ambrose back in the ring and gets a near fall.

Ambrose attempts Dirty Deeds, but Joe reverses it into a Samoan Drop. Joe attempts to lock the Coquina Clutch in again. Ambrose reverses and hits Dirty Deeds. Joe gets his foot on the bottom rope before three. Joe rolls out of the ring. Ambrose quickly follows Joe. Ambrose attempts to whip Joe into the steps, but Joe reverses and Ambrose goes crashing into the steps. Joe goes over to the announce table and starts pulling it apart. Joe puts Ambrose on the announce table. Joe comes on top of the table and picks Ambrose up in Muscle Buster position and drives him through the table. Joe rolls back in the ring. Ambrose fails to make it back in the ring before ten. Samoa Joe wins via count out.

As mentioned earlier Braun Strowman was able to defeat the dominant Samoa Joe in the last round. That victory has set Braun in a tie for first place with Joe. If Braun can pick up a victory tonight and on Night 17 he will win the Raw Block. Even if Samoa Joe wins his two matches, Strowman will get the win since Strowman defeated Joe in the tournament. Neville has started making a comeback. On Night 11 he defeated Dean Ambrose and on Night 13 he defeated Seth Rollins in an amazing match. He’s going to have to pull out every trick in the book to try and defeat the much larger Braun Strowman.

Match Highlights: Strowman mocks Neville’s height. Strowman gets down on both knees and says now it’s a fair fight. Neville hits three Super Kicks in a row which takes Strowman down. Neville quickly goes to the top rope and hits the Red Arrow. Strowman kicks out at one and presses Neville off of him. Neville attempts to lock in the Rings of Saturn. Strowman pushes Neville off. Neville charges in but Strowman drills him with a big boot. Strowman picks Neville up and hits with the Running Powerslam for the victory.

On Night 13, Roman’s shoulder injury cost him his match against his former Shield brother, Dean Ambrose. Roman has been doing physical therapy all week. The shoulder is still not 100%, but Reigns refuses to forfeit this late in the tournament. Poor Bray Wyatt has not been able to get one victory in this tournament. Tonight he will be looking to spoil his old rival’s chance of winning the Raw Block.

Match Highlights: Wyatt slaps Roman. Roman throws a wild clothesline, but Wyatt dodges and rolls outside the ring. Roman quickly follows Wyatt. Wyatt catches Roman with a big throat thrust. Roman responds with a throat thrust of his own. Roman attempts to whip Wyatt into the barricade. Wyatt reverses and whips Roman shoulder first into the barricade. Wyatt then throws Roman shoulder first into the post. Wyatt rolls Roman in the ring for a near fall.

Wyatt keeps Roman grounded and stomps on his injured shoulder. Wyatt picks Roman up and attempts to toss him shoulder first into the turnbuckles. Reigns reverses and sends Wyatt into the turnbuckle. Wyatt comes stumbling out of the corner and Roman attempts a Samoan Drop. Roman’s shoulder gives out and Wyatt slips off of Roman’s shoulders. Wyatt hits a hammerlock suplex for a near fall. Wyatt attempts Sister Abigail, but Roman fights out. Wyatt hits a throat thrust. Wyatt bounces off of the ropes, Roman uses Wyatt’s momentum and hits a Samoan Drop and gets a near fall.

Both men take awhile to get back to their feet. They get up at the same time. Wyatt throws a wild clothesline but Roman ducks and hits a series of clotheslines with his good arm. Roman stalks Wyatt and hits a Superman Punch. Roman charges in for the Spear but Bray catches him with a Big Boot. Wyatt launches Roman shoulder first into the post. Wyatt follows up with a shoulder breaker for a near fall.

Wyatt locks in a nerve hold on Roman’s shoulder. Roman starts fighting to his feet. Wyatt sends him back down with an STO. Wyatt laughs and bounces off of the ropes. Wyatt attempts a running senton but Roman moves out of the way. Roman crawls into a corner and drags himself up. Wyatt charges in but Roman moves out of the way. Roman hits a series of headbutts. Roman bounces off of the ropes but Bray cuts him off with a crossbody block. Wyatt attempts to hit Sister Abigail again, but Roman reverses it into a School Boy for a near fall.  Roman hits three Superman Punches in a row and gets the win.

In the last round, Finn Balor defeated Bray Wyatt. The Club finally listened to Finn and stayed in the back during the match. However, after the match, they came out and celebrated with Finn. People are continuing to speculate if Balor is really innocent or if he is in collusion with Gallows and Anderson. Balor has once again requested The Club not interfere even though Bo Dallas, Curtis Axel, and Maryse will be lurking at ringside. With a record of 2-5, the Miz is mathematically eliminated from winning the tournament. The former Intercontinental Champion will be looking to ruin Balor’s chances of winning the Raw Block.

Match Highlights: Miz offers Finn Balor a Too Sweet. Finn denies it and does a gun gesture to Miz. Miz is furious and slaps Finn. Finn retaliates with a clothesline. Miz goes down and rolls out of the ring to consult with the Miztourage. Finn bounces off of the ropes and hits a flip dive. Miz moves out of the way and Finn wipes out the Miztourage. Miz attacks Finn from behind. Miz rolls Finn back in the ring and attempts to hit the Skull Crushing Finale. Finn blocks it and hits an overhead kick. Miz falls out of the ring. Finn bounces off of the ropes again and hits the flip dive on Miz. Finn rolls Miz back in the ring and gets a near fall.

Finn dropkicks Miz into the corner and goes to the top rope for the Coup De Grace. Curtis Axel is back up and distracts Finn. Miz takes advantage and pushes Finn of the top rope to the floor. Miz distracts the referee to allow Bo and Curtis to attack Finn. Miz goes to the outside and throws Finn into the barricade. Miz rolls Finn back in the ring and starts working on his legs. Miz locks in the Figure Four. Finn fights his way to the ropes. As soon as Finn touches the rope, Bo jumps up on the apron and distracts the referee. Axel slides in the ring and helps Miz pull Finn back in the middle of the ring.

Finn flips over and reverses the pressure. Miz gets to the ropes. Miz is back to his feet first and attempts a Dragon Screw. Finn hits an Enziguri before Miz can take him down. Finn hits a Sling Blade for a near fall. Finn attempts Bloody Sunday, but Miz blocks and hits a knee breaker. Miz tosses Finn out of the ring. Miz distracts the referee again while Bo and Axel attack Finn. The Club’s music hits. Gallows and Anderson run down to ringside and brawl with Bo and Axel. Miz yells at the referee to eject Gallows and Anderson. All four men brawl into the crowd. Finn slides back in the ring. Miz turns around and gets hit with Bloody Sunday. Finn gets the win.

In the last round, Seth Rollins lost to Neville via referee stoppage. Neville worked on the injured neck of Rollins the whole match and then locked him in the Rings of Saturn. Rollins passed out from the pain and the referee had no choice but to stop the match. WWE doctors are highly recommending that Rollins forfeit his last two matches. Rollins refuses to forfeit and is hell-bent on winning the Raw Block. Cesaro is also determined to win the Raw Block. Thanks to some help from Sheamus he was able to overcome The Miz and The Miztourage in the last round.

Both men lock up again. Cesaro quickly knees Rollins in the ribs. Cesaro attempts a vertical suplex but Rollins floats over and lands on his feet. Rollins quickly attempts to hit the Ripcord Knee. Cesaro blocks it with several back elbows. Cesaro runs forward and jumps on the middle rope to attempt a Springboard European Uppercut. Rollins ducks the uppercut and Cesaro crashes to the mat. Rollins hits a hurricanrana which sends Cesaro stumbling out of the ring. Rollins wastes no time and bounces off of the ropes and hits a suicide dive.

Cesaro picks Rollins up and attempts the Neutralizer. Rollins blocks and attempts to back body drop Cesaro but he lands on his feet. Cesaro bounces off the ropes and charges in at Rollins. Rollins catches him with a jumping knee strike. Rollins follows up with a Slingblade and gets a near fall. Rollins goes to the rope and attempts a frog splash. Cesaro rolls out of the way and immediately locks in a Crossface. Rollins fights his way to the ropes. Cesaro holds onto the hold until the count of 4. Cesaro drags Rollins to the middle of the ring and hits the Cesaro Swing. Cesaro follows up with the Neutralizer but Rollins kicks out at two.

Cesaro picks Rollins up and takes him to the top turnbuckle. Cesaro attempts a Super Ricola Bomb, but Rollins reverses it into a hurricanrana and launches Cesaro off of the ropes to the mat. Rollins follows up with Advera Kedavra and gets a near fall. Rollins attempts the Curb Stomp but Cesaro moves out of the way. Cesaro attempts to German Suplex Rollins. Rollins lands on his feet and hits a jumping knee. Rollins then hits the Ripcord Knee and gets the win.

Here are the rankings after Round 8:

Here are the matchups for the last two nights of the tournament: