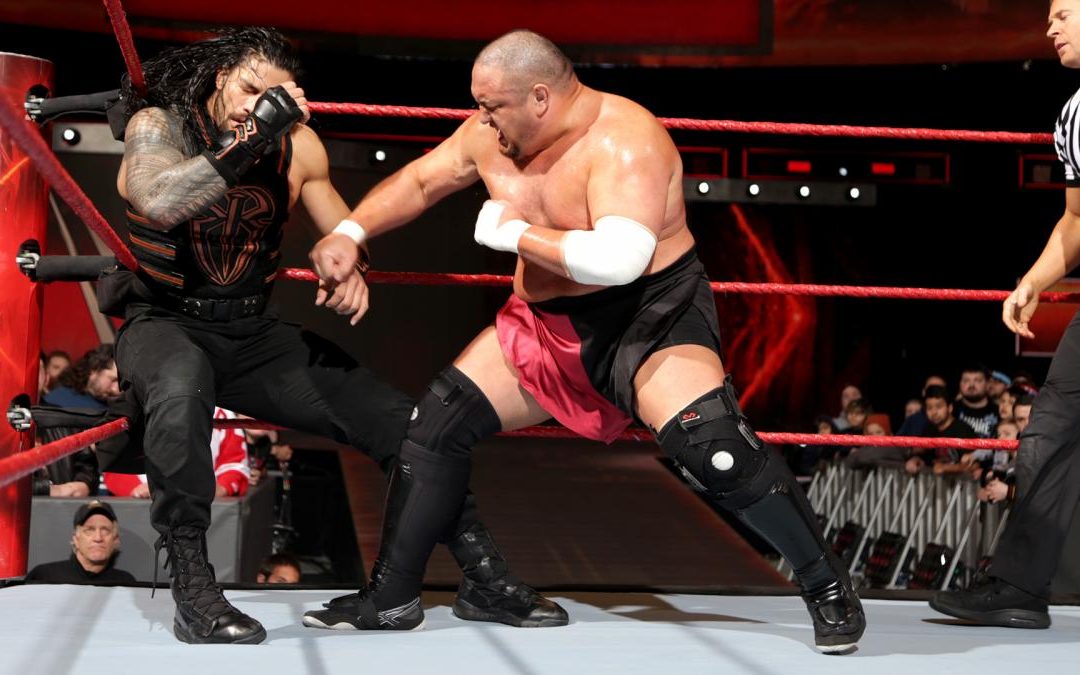 The quest for glory and in ring supremacy continues with Night 5 of the WWE Fantasy G1 Climax Tournament! Catch up on the previous nights here. Night 5 features the third round of the RAW Block The main event of the evening is Roman Reigns vs. Samoa Joe. Here are the RAW Block rankings going into Night 5:

It’s the clash of the kings with “The King of the Cruiserweights” facing “The Demon King”. Neville has a chink in his armor in the form of an injured left knee. The WWE Medical team has cleared him to compete tonight. After two crushing defeats, Finn is looking to get his first win of the tournament.

Match Highlights: The bell rings and Finn immediately goes after the left leg of Neville. Neville sprawls and applies a front headlock on Finn. Finn spins out and hits a jumping double foot stomp to Neville’s back. Neville rolls out of the ring. Finn goes to the apron and lands a big running kick to Neville. Finn gets Neville back in the ring and gets a near fall. Neville scrambles to a corner and Finn quickly follows. The referee asks Finn for a clean break. Finn starts to back up and Neville pokes Finn in the eye. Neville hits a spin kick to Finn’s stomach and follows up with a one-legged dropkick. Neville hits a standing Shooting Star Press for a near fall. Neville attempts to lock in the Rings of Saturn. Finn escapes before Neville can completely lock it in and applies a Dragon Sleeper. Neville gets his foot on the rope for a break. Finn goes for the Bloody Sunday. Neville knees him in the head and lands behind him. Neville hits a snap German Suplex for a near fall. Neville goes for a standing corkscrew moonsault, but Finn moves at the last second. Finn hits a Pele Kick and Neville rolls out of the ring from the impact. Finn hits a suicide somersault senton. Finn gets Neville back in the ring and gets a near fall. Finn stalks Neville and dropkicks him into the turnbuckles. Finn goes to the top and goes for the Coup de Grace. Neville moves out of the way, but Finn rolls through. Neville hits an Enzuigiri followed up with a reverse hurricanrana. Neville gets a near fall. Neville goes for a dead lift German Suplex. Neville’s left knee gives out and he can’t finish the move. Finn hits the Sling Blade followed up with the Bloody Sunday. Finn gets the win.

Cesaro was able to bounce back by defeating Neville on Night 3. Now Cesaro will face one of his toughest tests in the tournament. Braun has barreled his way through his former Wyatt Family leader and The Miz. He is ready for more competition!

The Miz has not had the best of luck in the tournament. Distractions from Maryse and the Miztourage have backfired leaving “The A-Lister” with two losses. Ambrose was able to pick up some momentum on Night 3 by defeating his old rival, Bray Wyatt. Now the “Lunatic Fringe” has to get through the Miz and his shenanigans.

Match Highlights: The Miz asks for a microphone. The Miz says the fans don’t want to see him beat Dean Ambrose again. Miz says if Dean knew what was good for him he would forfeit this match. Ambrose’s music hits and he comes storming down the ramp. Bo Dallas meets Ambrose in the middle of the ramp and goes for a clothesline. Ambrose ducks and hits Dirty Deeds. Curtis Axel runs at Ambrose. Ambrose hits a big clothesline. Ambrose runs in the ring and goes after Miz. Miz rolls out of the ring. Ambrose chases Miz around the ring. Mayrse cuts Ambrose off and starts yelling at him in French. Miz moves Maryse out of the way and sucker punches Dean. Miz rolls Dean back in the ring. The bell rings and the match officially starts. Miz hits the Daniel Bryan running knee for a near fall. Miz attempts a Figure Four Leg Lock. Dean kicks Miz off. Dean hits a Lou Thez Press and pummels away at Miz’s face. Ambrose hits a swinging neckbreaker for a near fall. Curtis Axel starts to make his way back to his feet. Ambrose notices Axel and hits a suicide dive on him. The referee goes to the floor and ejects Axel, Dallas, and Maryse. Maryse yells “I didn’t do anything, you stupid ref!”. Out of nowhere, Miz hits a Skull Crushing Finale to Ambrose on the floor. Miz gets Ambrose back in the ring and hits another Skull Crushing Finale for the victory.

On Night 3, Rollins had a hellacious 30 minute Broadway with his former Shield mate Roman Reigns. It’s being reported that Rollins is still suffering from some pain in his neck which he first encountered after his match with Dean Ambrose on Night 1. His opponent for tonight, the “Eater of Worlds”, is desperate to get his first win of the tournament.

Match Highlights: Both men lock up. Bray gets Rollins in a headlock. Rollins bounces Bray off of the ropes and hits a jumping knee. Bray rolls out of the ring. Rollins goes for a suicide dive. Bray punches him in mid-air. Bray hits a Russian Legsweep into the barricade. Bray rolls Rollins back in the ring and starts working on his neck. Rollins fights out of Bray’s hold. Rollins hit a Slingblade for a near fall. Rollins goes to the middle rope and hits a Blockbuster for a near fall. Bray rolls outside of the ropes onto the apron. Rollins attempts to pick him up, but Bray hits him with a uppercut. Bray pulls Rollins through the ropes onto the apron with him. Bray punches Rollins. Rollins fires back with a punch. Bray kicks Rollins in the stomach and hits a DDT on the apron. The referee immediately jumps out of the ring to check on Rollins. The referee asks Rollins if he wants to forfeit the match. Rollins says no. Bray pushes the referee out of the way and hits a running senton. Bray gets Rollins back in the ring and gets a near fall. Bray attempts Sister Abigail. Rollins reverses it into a School Boy Superkick. Rollins goes to the top rope and lands a beautiful Frog Splash for a near fall. Rollins attempts the Rainmaker Knee. Bray starts elbowing Rollins. Rollins remains in control of Bray’s wrist and hits a short arm clothesline for a near fall. Rollins attempts a Pedigree. Wyatt reverses it into a back body drop. Bray follows up with a running senton. Bray starts stomping on the back of Rollins’ neck. Bray goes for a pin but Rollins kicks out a 2. Bray whips Rollins into the corner. Bray attempts a running splash. Rollins moves at the last second. Rollins hits a flatliner to the middle turnbuckle. Rollins goes to the top rope and goes for a Phoenix Splash. Bray moves, but Rollins rolls through. Bray hits a running body block. Bray picks Rollins up and hits him with Sister Abigail. Rollins gets his foot on the bottom rope to break the pin. Bray drags Rollins to the middle of the ring and pins him again. Rollins barely kicks out at two. Bray is visibly frustrated and starts talking to himself. Bray picks up Rollins and attempts a Uranage. Rollins fights out. Rollins hits a jumping knee. Rollins hits the Rainmaker Knee for the victory.

Roman threw everything he had at Seth Rollins, but couldn’t get the job done within the 30-minute time limit. Roman’s shoulder is still banged up from his encounter with Finn Balor on Night 1. Samoa Joe has earned two victories by choking out Finn Balor and Cesaro with the Coquina Clutch. Joe will be looking to make Roman the third victim of the deadly submission hold. There is no love lost between these two Samoan bad asses.

Match Highlights: The bell rings and both men come face to face and start talking trash to each other. Both start quickly exchanging punches. Joe wins the exchange by hitting a headbutt. Joe looks to apply the Coquina Clutch. Roman counters and whips Joe into the ropes. Roman hits a jumping clothesline. Joe rolls out of the ring from the impact. Roman follows Joe outside the ring. Roman hits a big headbutt. Joe stumbles back towards the steps. Roman makes his way towards Joe. Joe grabs the bottom of Roman’s vest and pulls him face first into the steps. Joe gets Roman back in the ring. Joe snapmares Roman into a seated position. Joe kicks him in the back, chops him in the chest, and hits a running senton. Joe gets a near fall. Joe quickly applies a Fujiwara Armbar onto Roman’s arm. Roman is able to get his feet to the ropes to break the submission. Joe attempts to throw Roman’s right shoulder into the post. Roman reverses and throws Joe into the post. Roman tosses Joe with a big back suplex for a near fall. Roman goes for a Superman Punch. Joe dodges and throws him through the middle ropes to the floor. Joe bounces off of the ropes and connects with a suicide dive. Joe gets Roman back in the ring. Joe tries to whip Roman into a corner, but Roman reverses and whips Joe into a corner. Roman runs in for a clothesline. Joe catches him with a ST-JOE for a near fall. Joe sits Roman on the top rope and tries to lock in the Muscle Buster. Roman fights out and hits a palm strike. Roman hits a Superman Punch from the middle rope for a near fall. Roman charges in for the Spear, but Joe kicks him in the right shoulder as he comes in. Joe uses a jumping armbar takedown. Joe locks in the Crossface. Roman eventually reverses the Crossface into a pinning predicament. Joe kicks out at two. Joe is quick on the rebound and gets Roman up for a Chimera Plex for a near fall. Joe attempts to lock in the Coquina Clutch again. Roman fights out and gets Joe up for a Samoan Drop for a near fall. Roman charges in and finally hits the Spear. However, Joe rolls out of the ring. Roman goes for the “Undertaker Dive”. Joe moves at the last second and Roman crashes to the floor. Joe rolls Roman back in the ring. Joe locks in the Coquina Clutch and Roman passes out.

RAW Block Rankings after Round 3: