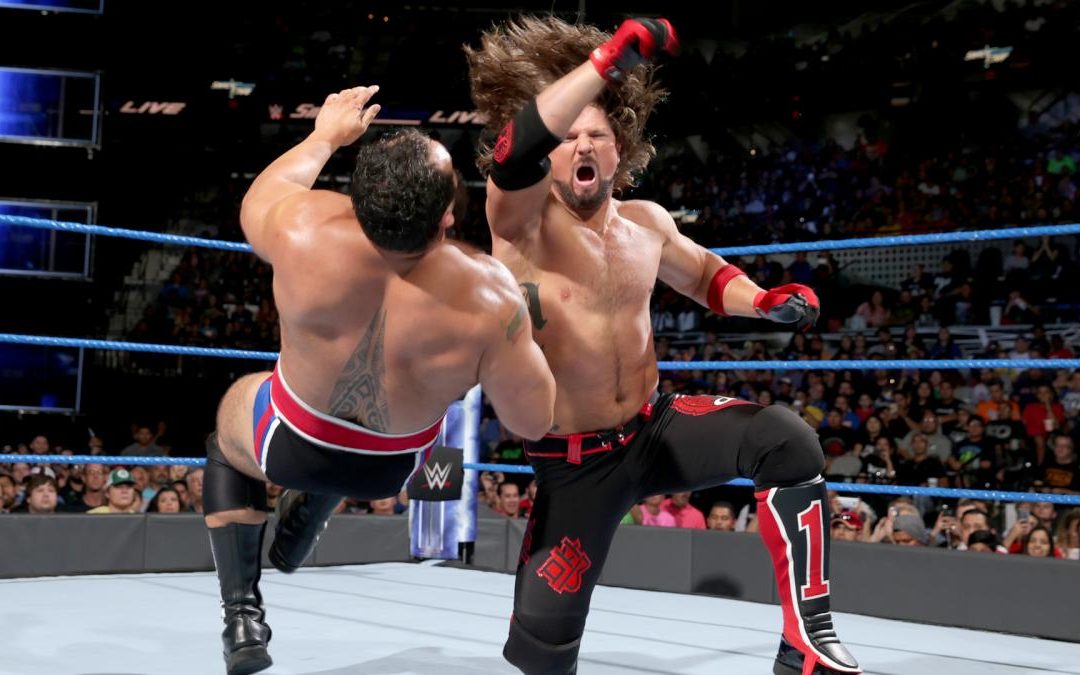 Both of these men are undefeated. Kevin Owens has cheated his way to two victories over Randy and Dolph Ziggler. Owens is proving he will do whatever it takes to win. Luke Harper has had impressive performances against Rusev and Dolph Ziggler. After this match one of these men will have their “O” taken away. Who will emerge at the top of the leader board?

Match Highlights: Owens extends his hand to Harper and says just “like old times”. Harper slaps Owens’ hand away and unleashes three devasting punches. Harper whips Owens into the ropes. Owens hits the breaks and slides out of the ring. Harper wastes no time and hits a suicide dive on Owens. Harper rolls Owens back in the ring and gets a near fall.

Harper applies a front face lock and executes a Gator Roll. Owens fights out and chops Harper several times. Owens whips Harper into a corner. Owens charges in with a clothesline and then a cannon ball. Owens gets a near fall. Owens applies a chin lock and screams “chin lock city”!

Harper fights out of the chin lock and hits a palm strike. Harper attempts a Discus Lariat. Owens ducks and School Boys Harper. Harper kicks out a two. Owens hits a Pumphandle Neckbreaker for a near fall. Owens locks in the Sharpshooter. Harper gets to the ropes to break the submission. Owens holds on until the referee’s count of 4.

AJ Styles was the latest victim of an RKO out of nowhere. Styles is still working with some back issues which will likely hinder his performance in this match. The Bulgarian Brute, Rusev left John Cena in a bloody mess and pulled off one of the biggest upsets of the tournament thus far.

Match Highlights: AJ throws several kicks to Rusev’s left leg. AJ then transitions into a series of forearm smashes. AJ attempts to whip Rusev into the ropes. Rusev doesn’t budge. Rusev whips AJ into the ropes. As AJ runs towards Rusev, he hits a spinning heel kick. Rusev goes for a pin and gets a one count.

Rusev drops several knees to the back of AJ. Rusev applies a chin lock and drives his knee into AJ’s back. AJ fights out of the hold and hits a big drop kick. Rusev rolls out of the ring. AJ gets ready to do a dive. Before he jumps, Lana gets in the way. AJ warns Lana to move. Lana refuses to move. AJ springboards off of the ropes. Lana quickly runs out of the way. Rusev catches AJ and slams him onto the floor.

Rusev gets AJ back in the ring. Rusev applies a bear hug. AJ double claps Rusev and escapes the hold. AJ attempts to get Rusev on his shoulders for the Ushigoroshi, but AJ’s back gives out. Rusev hits the Macka Kick for a near fall. Rusev throws AJ across the ring with the Bulplex and gets a near fall.

Rusev attempts to lock in the Accolade. AJ escapes before Rusev can lock it in. AJ hits a Pele Kick. AJ goes to the apron to hit the Phenomenal Forearm. As he gets ready to jump, Lana grabs his foot. AJ argues with Lana. Rusev takes advantage of the distraction and suplexes AJ into the ring for a near fall.

Rusev stomps on AJ’s back and then applies the Accolade. AJ finds a way to break Rusev’s grip and fights his way out of the Accolade. Rusev picks AJ up and attempts a swinging side slam. AJ lands on his feet and rolls Rusev into the Calf Crusher. Rusev tries to get a rope, but can’t make it. Rusev has no choice but to submit.

As mentioned earlier, Cena was bloodied and defeated by Rusev in round 2. Cena will be looking to get back on track. Baron Corbin has struggled to get his first victory. Corbin has the chance to get an upset win and pick up some momentum in the tournament.

Match Highlights: Cena and Corbin start with a test of strength. As Cena is getting the advantage, Corbin kicks him in the stomach. Corbin hits Cena with a big right punch which sends Cena stumbling into a corner. After a series of big elbows to Cena’s head, Corbin chokes Cena with his foot. The referee starts counting and Corbin breaks at 4. Corbin drags Cena out of the corner and gets a near fall.

Corbin mounts Cena and starts punching at his stitches. Cena blocks a big punch and retaliates with one of his own. Cena hits two shoulder blocks followed up by the spinning powerbomb. Cena hits the Five Knuckle Shuffle and attempts an Attitude Adjustment. Corbin fights out and hits Deep Six for a near fall.

Corbin attempts the End of Days, but Cena fights out. Corbin hits another big right to Cena’s head. Some of Cena’s stitches open up and he starts to bleed. Cena sees that he’s bleeding and is enraged. Cena hits a big clothesline. Cena then slams Corbin down to the mat with the Attitude Adjustment. Cena locks in the STF for the submission victory.

In one of the most shocking moments of the tournament, Sami Zayn submitted Shinsuke Nakamura. Much like Baron Corbin, Ziggler has not been able to get a win. Ziggler hopes to reverse his fortune tonight.

Match Highlights: Zayn and Ziggler lock up and start chain wrestling. Ziggler gets the better of the exchange and has Zayn in a headlock. Zayn fights out and whips Ziggler into the ropes. Zayn throws a clothesline and Ziggler ducks. Ziggler bounces off of the ropes and Zayn hits a hip toss. Zayn hits a standing moonsault and gets a near fall.

Zayn attempts a Blue Thunder Bomb, but Ziggler fights out and hits a big dropkick. Ziggler hits a series of jumping elbow drops and gets a near fall. Ziggler attempts the Zig Zag. Zayn blocks by holding onto to the top rope. Zayn attempts a Half and Half Suplex. Ziggler blocks the Suplex and hit a Fame Asser for a near fall.

Zayn attempts the Helluva Kick. Ziggler dodges at the last second and Zayn gets crotched. Ziggler Super Kicks Zayn. Zayn gets his foot on the bottom rope to break the pin. Ziggler argues with the referee over his count. Ziggler picks Zayn up. Zayn quickly hits a Flatliner and transitions into the Koji Clutch for the submission victory.

Randy Orton utilized an RKO out of nowhere to get a victory over one of the favorites to win the tournament, AJ Styles. Orton will now face another tournament favorite in Shinsuke Nakamura. Nobody expected to see Nakamura tap out in the last round. Nakamura is going to need to tap into his “fighting spirit” to defeat the Viper.

Match Highlights: Nakamura and Orton lock up. Orton breaks the lock up and hits a European Uppercut. Orton follows up with a jumping a knee drop. Orton goes for a pin and Nakamura kicks out before the referee gets to one. Orton stomps all over Nakamura’s body. Orton goes for the jumping knee drop again. Nakamura moves and hits a running leg lariat. Nakamura hits a Saito Suplex for a near fall. Orton rolls out of the ring.

Nakamura follows Orton to the outside. Orton quickly hits a clothesline. Orton then back suplexes Nakamura onto the barricade. Orton rolls Nakamura back in the ring and gets a near fall. Orton attempts an RKO. Nakamura pushes Orton off. Nakamura hits a series of short arm lariats. Nakamura hits the Detonation Kick for a near fall.

Nakamura attempts a Death Valley Driver. Orton fights out and hits an inverted backbreaker for a near fall. Orton sits Nakamura on the top turnbuckle. Orton attempts a Superplex. Nakamura pushes Orton off to the mat. Nakamura goes to the middle rope and jumps off with a Kinshasa. Nakamura gets a pin fall, but Orton kicks out at two.

Nakamura locks in a Triangle Choke. Orton gets his foot on the bottom rope to break the submission. Nakamura goes for an inverted exploder. Orton blocks the exploder and delivers an Angle Slam for a near fall. Orton stalks Nakamura for another RKO. Nakamura reverses the RKO into a backslide pin. Orton kicks out at two. Nakamura hits a Kinshasa for the victory.

Smackdown Block Rankings After Round 3: