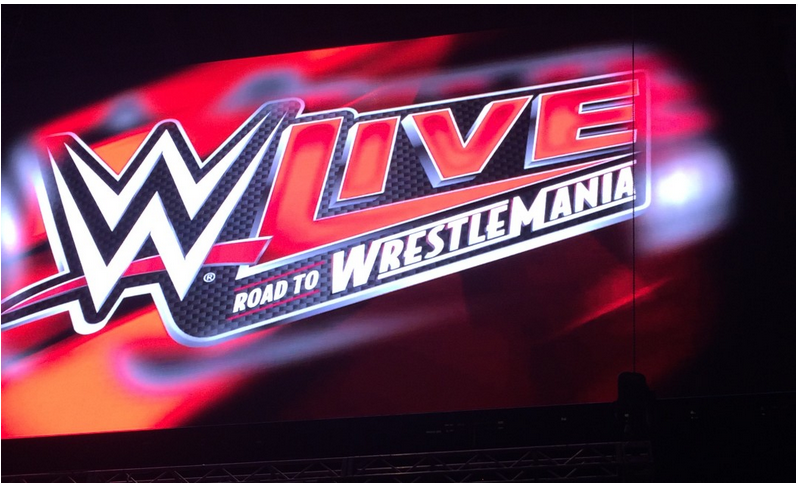 I hope everyone had a great Valentine’s Day. After enjoying Vallarta’s Mexican Restaurant, the wife and I headed to Amalie Arena in Downtown Tampa for the WWE Road to WrestleMania show. There were a lot of families dressed up in Cena gear. Unfortunately for them, Cena was with the crew that was working in Abu Dabi.

The show opened with Corey Graves and Greg Hamilton hyping up NXT and the recent Takeover event. Graves says NXT is taking over tonight. Out comes Adrian Neville and Kevin Owens for a NXT Championship match. There were a lot of “NXT” chants and a few “Fight Owens Fight” chants from the smarks in the crowd. This was a great opener with both men getting in their signature spots. Owens retained after hitting a big pop up powerbomb. Owens was impressive in this match. I don’t see him spending too much time down in NXT. 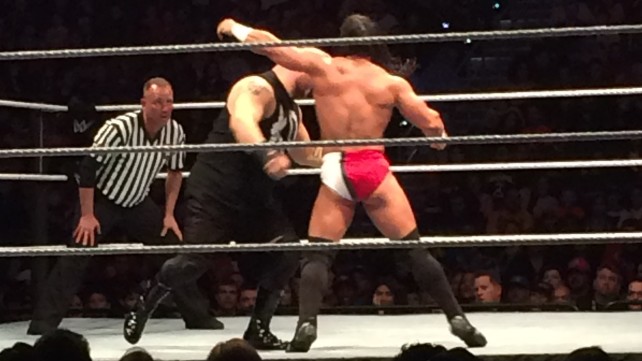 Next up we had a battle of former Prime Time Players with Darren Young against Titus O’ Neil. A lot of people in the crowd were doing Titus’ dog bark at him. Titus dominated a majority of the match. Young gets the win with a quick school boy. I really think that these two were better off together. Titus has potential to be a star, but he’ll never get there if keep him with Heath Slater. 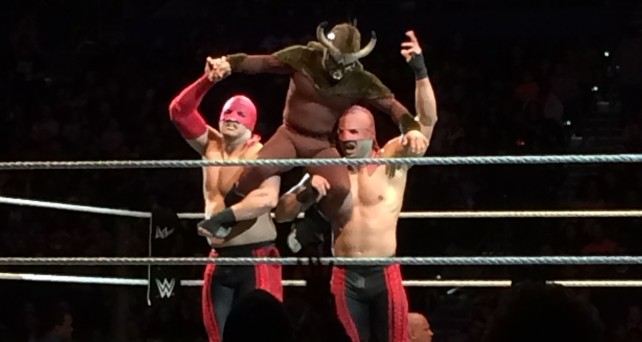 BREAK WALLS DOWN echoes through the arena as Chris Jericho makes his way to the ring for The Highlight Reel. Jericho talks about he loves Tampa so much that he lives here and was happy to perform for us tonight. He says that he could run the WWE better than the Authority. He calls Triple H a jackass and says Triple H stands for Horrible Humongous Honker. He then starts calling Stephanie a filthy, dirty, disgusting, bottom feeding, trash bag…he says he can’t say the last word because WWE is pg now. The crowd boos and Jericho says it’s not his fault. Cesaro makes his way down to the ring. Cesaro doesn’t want to embarrass Jericho in his hometown and tells him to leave the ring. Jericho acts like he’s going to leave and turns around clocks Cesaro. Jericho told the referee to ring the bell and we officially have a match. Jericho and Cesaro have a back and forth match. Jericho wins with a Codebreaker out of nowhere. I was expecting this match to better than it was considering the two guys in the ring, but it was great to see Jericho as he wraps up his Y2J WWE Winter Tour.

After Jericho goes to the back the lights go out and Bray appears on the screen and says “I’m here.” Wyatt makes his way down to ring followed by his tag partner for the night Corporate Kane. Out next is Daniel Bryan to a big pop and Yes chants. Bray and Kane start beating down Bryan. Orton’s music hits and he makes a beeline to the ring to help out Bryan. There were several RKO and Yes chants throughout the match. At one point, while Bryan was in a chin-lock, Orton started a Yes chant on the apron to help Bryan get pumped up. The match ended with an RKO out of nowhere on Bray and a Running Knee to Kane by Bryan for the win. Bryan and Orton celebrate with the crowd and we go into intermission. 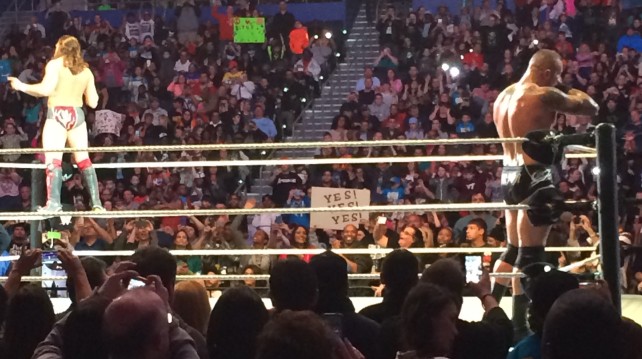 Back from the break we have a Divas match which the fans voted to be a 6 Man Tag instead of a one on one match. It was the team of Sasha Banks, Summer Rae, and Alicia Fox against Emma, Natalya, and Paige. I started the “Sasha’s Ratchet” chant and she didn’t like that one bit. Paige was definitely the star of this match and won the match for her team with a PTO on Alicia. 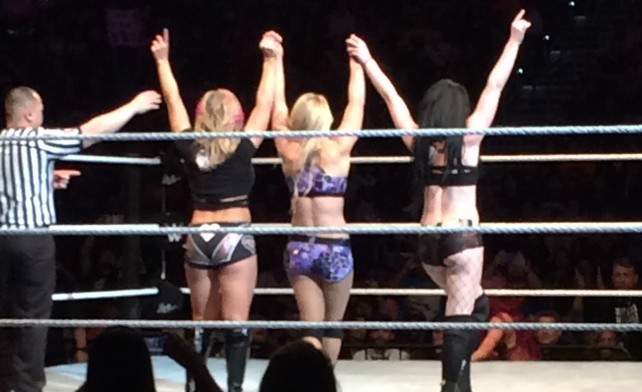 Next we have a WWE Tag Title match. Miz and Mizdow make their way to the ring. Miz gets on the mic and runs down all the ladies in the audience. He then forced Mizdow to take his jacket off. The crowd was chanting for Mizdow the whole time. Out come the Usos, who got a great reception from the fans. Miz made Mizdow sit in a chair in the corner and said if we’re lucky he’ll tag Mizdow in. There was a lot of comedy spots with Mizdow mimicking Miz. Miz tells Mizdow to get off the apron. When Miz turns around he eats two superkicks from the Usos and a big splash. 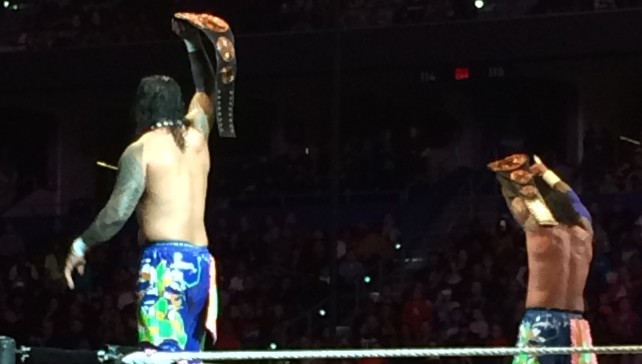 Our main event was a Tampa Street Fight with Big Show against Roman Reigns. Reigns came down our side again and got mostly cheered. There were a few smarks that were booing him. Unfortunately for Reigns he was fighting Big Show and it’s pretty hard to get excited for a Big Show match nowadays. Show went through a table early and took several Singapore cane and chair shots to the back. Big Show returned the favor with cane shots to Reigns. Towards the end of the match Big Show hit Reigns with a chokeslam and knockout punch. Reigns pulled a Cena and kicked out a 2. Reigns then hit the Superman Punch and speared Big Show through a table. Reigns picks up the win and takes several selfies with fans in the front row.

Overall a great show with some decent matches. Bryan and Orton definitely received the biggest pops and their match was the best. My wife was happy to see her other Valentines, the Usos, Reigns, and Orton.