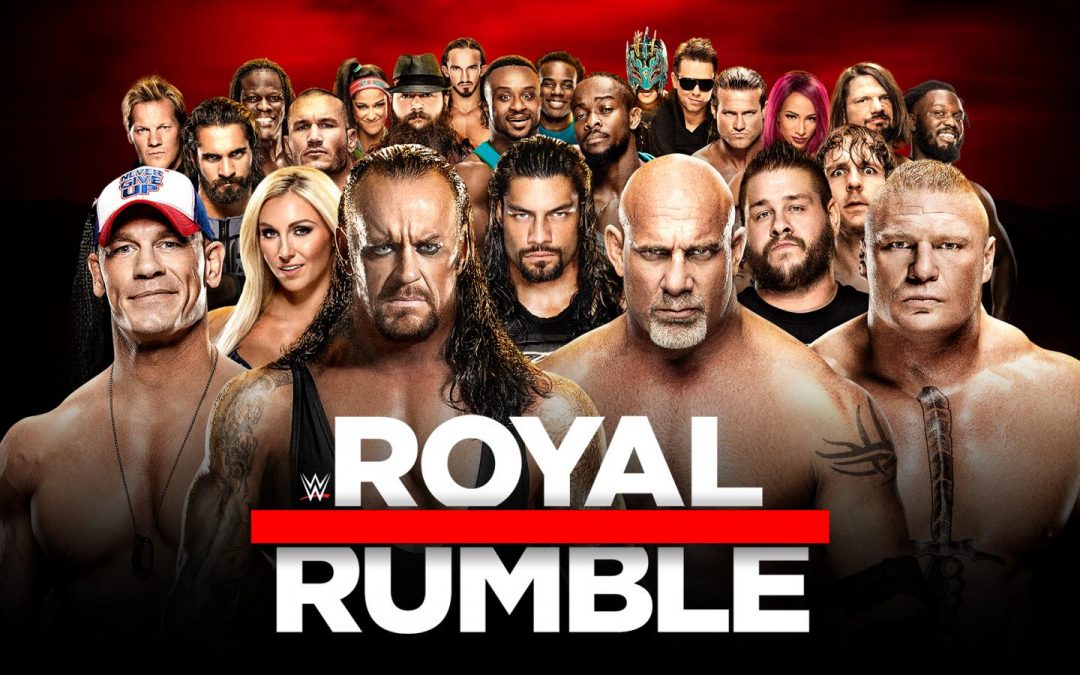 Hey everyone, this is our first fan feedback post PPV column. The following entries come from members of The Wrestling (Squared) Circle Facebook group, if you would like to send post PPV feedback send it to [email protected]!

This will be an evolving column, as more sections will be added. Follow us on Twitter @SocialSuplex @richlatta32 or @ProBlackGuy

Much like SummerSlam ’16 this was an extreme stunts match big move after big move probably to the most ridiculous level I’ve ever seen. But it had an amazing crowd

Probably the best royal rumble match ever there were great stories told through out by Jericho, New Day, Cesaro, The Wyatts & Sheamus. Particularly by Strowman who had an outstanding showman.

When it got to the end and it went to a sequence of Brock dominating to Goldberg dominating to Undertaker dominatong to Roman Reigns dominating it was simply magical, fantastic crowd. One of the best matches ever.

This match told a good underdog vs superior athlete match as Charlotte cockily dominated Bayley with very athletic offence, Bayley made some cool come backs too, the crowd was generally quite off for this match though.

A fantastic match, both guys were brutal through out, aggressive and making things very personal they used weapons to destroy each other often in innovative ways, there were also alot of cool antics, crowd was wild at times a bit quiet at others. Great story, Great crowd, Great match.

I wouldn’t say this card had a good or bad match, rather strong and weak spots throughout the card. With that being said, here is my opinion on the 2017 Royal Rumble. (as scarce as possible)

Not the Most popular (Due to the inclusion of Reigns) but in my opinion the match of the night. Yes, Styles V Cena Was one hell of a battle, But the Sheer physical and steady pace of these two was captivating to say the least. The one-upmanship and grit made it feel like they were actually fighting for something and in a sense made the universal title feel like it meant something (which honestly hasn’t felt like anything since the night after Summer Slam). With spot after spot, it had a nostalgic feel to it as a lot of us diehard fans lone for the days of old where guys went all out for title matches. From Owens pulling out a superman punch, to the call back to the stone-cold stunner, to that sick frog splash through the table, this match kept my attention from start to finish. With hardly a dull moment, Jericho in the cage was an afterthought (And in my opinion was unnecessary). Including Stroman was a nice touch, as it made him look like a monster while roman stayed strong needing 2 men to defeat him. But in the end, the outcome of the match was a swerve to us smarks and Owens came out looking like he deserved to be the universal champion.

This is a spot I know most of my squared circle brethren relegated for the cruiser-weights, but I feel as though Swann & Neville put on a great match overlooked due to the negative stigma around that division. But to me, Bayley is inferior to Charlotte all around, From mic work to in ring skill. The fact Charlotte is a great hand is what kept this match on par in my opinion, and at various times throughout the bought she just looked like she was playing catch up. Don’t get me wrong, Bayley is far from bad as a wrestler but her gimmick along with her seemingly shrinking under the big lights makes her seem like that bingo hall Cinderella all too much. Genetically superior is Charlotte’s gimmick and she certainly looked that way Sunday night. Good thing Is Bayley can only go up from here, and being in a program with a talent like Charlotte will elevate her most definitely.

The Rumble Match: Randy Orton (W) This match here was

This match here was a Hour and 10 Min’s of ups & Downs, finished with a cup full of back-washed booking. Jericho playing the part of the stark Veteran, Mark Henry’s homecoming to a sea of cheers, Stroman going berserker to Sami Zayn’s delivery of a nasty Helluva kick to Stroman in the corner, there was a lot to enjoy. Having WWE listen to the fans and bringing Tye Dillinger in at 10 was one hell of a moment, But not the moment we needed to win us over on this being an incredible rumble.  Big show face to face With Stroman was indeed a mark out moment, but in their 1 on 1 exchange you can see the hesitation in Stroman as he went through the sequence that led up to Big shows elimination. Baron Corbin was great in the rumble further showing me why he is indeed worth the push, and his elimination of Stroman made him look like a legit bad ass. Lesnar was in beast mode but ultimately Goldberg had his number yet again, Goldberg was very stiff in the moves he gave which made him look strong in his first royal rumble outing in over a decade. And then there was the undertaker…… underwhelming in my opinion and he shouldn’t have been in the match. They could have picked another way for him to declare his match at Mania and start up the feud with roman reigns (His belly and hair dye made me sad honestly). Speaking of roman reigns, the number 30 spot was wasted and had potential to be someone spectacular but they gave us roman reigns. In the end, Orton winning wasn’t a bad thing because it not only furthers a great story line but we potentially get something we’ve been longing for and that’s bray Wyatt as WWE Champion.

So all and all, I’m giving The 2017 Royal Rumble a 4.0 out of 5. Not due to the rumble itself but the stellar championship matches on the card that held it together.

What I thought about the Rumble:

First off, thank you for giving me the opportunity to send something across. And also being apart of The Wrestling Squared Circle. I first heard you on Chad Matthews’ podcast and really it enjoy when you guys get together and get Raw on The Doc Says. Been listening to Chad since Day 1.
Right, enough smoke blowing…. on to The Rumble.
I didnt catch the pre show. I was picking up Lunch Pizzas for the fellas. I had 6 guys over. Like I do every year.
I found it to be a bit of a let down. All that build up on Raw, to have a Smackdown superstar win it. A guy that didn’t need to win it either. Randall Keith Orton should not be winning a Royal Rumble in 2017. With no build. No push. His storyline arc just doesn’t make sense to me. After “getting in” with The Wyatts, after turning on Kane, he has been driving a wedge between Bray and Luke Harper. That has been intriguing. When and where will he turn on Wyatt? Or will it be Bray figuring it out that Orton is trying break up his family. Which written right could be face turn for Bray. Orton does his best work as a heel, Wyatt hasn’t had much of face run. He could use a big push himself. Will he win the title at Elimination Chamber? Will be a shock but I can see it. God knows Cena vs Orton as the main event will be hijacked and pissed on for the whole match no matter how much of a good match they put on.
Surprise Entrants? Ill give them Tye Dillinger at 10. And that’s being generous. If he the Perfect 10 didn’t come out at 10 then may the Lord help whoever does. There were no great surprises of The Rumble, which is a real disappointment. Shock returns or shock entrants make a Royal Rumble more enjoyable. Look at all the YouTube videos that are made based on surprise RR entrants. Where was Kurt Angle? Finn Balor?? Samoa Joe at 30? Instead, we got a different Samoan at 30. Roman ‘no character’ Reigns. There is nothing that I can say that can make sense of Roman Reigns entering the RR last minute. Why did he enter? Why didn’t he take someone out that was supposed to be in it? If he had won, someone may have jumped the barrier and done a Monica Seles (podcast reference).
Kevin Owens vs Roman was a great match. Their best to date. Some great wrestling back and forth. Reigns kicking out of Superman Punch with brass knucks was questionable. Maybe should have left it out. While a great spot it, its like Rusev and his Accolade in a chain that couldn’t get Roman to tap, it’s not believable. Jericho screaming from the cage was distracting but didn’t effect it too much. A real enjoyable match and PPV worthy. As long as its their last one.
John Cena vs AJ Styles was insane. These guys are so good together. You can tell they respect each other in the ring. I thought the match at Summerslam was better, but their timing and storytelling was spot on. This will get another watch sooner rather than later.
Bayley vs Charlotte Flair was very solid without being spectacular. Charlotte dominating the match was to be expected. This was Bayley’s first title match and she should have to work her way to Charlotte’s PPV level. That Natural Selection on the apron looked like it hurt. It was a great spot and a great ending to a match I expect we may see again soon.
Neville vs Rich Swann. Haven’t paid much attention to the Cruiserweights. 205Live is on during the day where I am.But they put on a great show. Neville can work.He is a speedy worker and is deadly with his feet. And insanely strong for a smaller guy.
Being in Australia, and all time zones matter. I take the day off work every year to watch The Royal Rumble. The Rumble PPV is normally made by the RR match. And this match didn’t live up to the hype it created. No real surprises and a terrible ending. Remember The Rumble? Still trying to forget this one like its 2015.
Sorry if it was longer than expected, once I started I found it hard to stop.
Thanks for the opportunity to send something across. This would be my first review.
Cheers
********************************
********************************
Caleb Baldwin