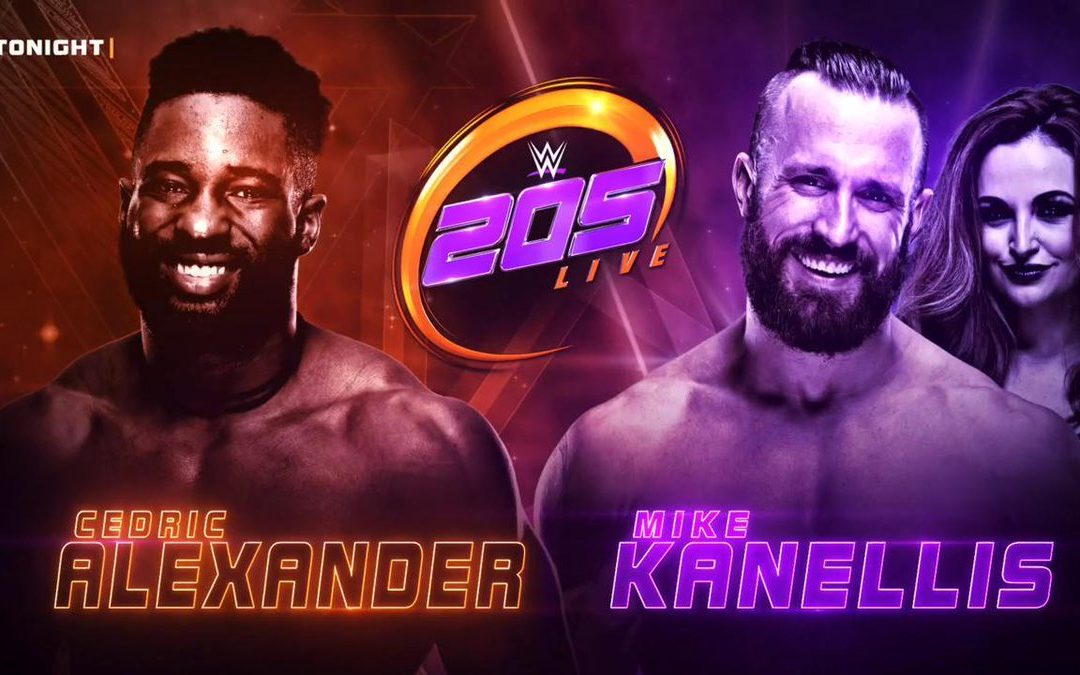 General Manager Drake Maverick took to social media today to advise of a huge announcement on the cards for tonight’s 205 Live in relation to the upcoming WrestleMania 35. Could it be the reveal of who will challenge Buddy Murphy for the Cruiserweight Championship? His narrow escape from Akira Tozawa was an excellent match at this last Sunday’s Elimination Chamber PPV, but many other Cruiserweights may be circling Murphy, waiting for blood to spill. Or does Maverick have something else up his sleeve for The Show of Shows? Let’s find out.

Maverick’s traditional introductory video gives us a recap of the action from last Sunday, with the emphasis on Murphy being Unstoppable. Taking this into consideration, Maverick has announced an eight man singles tournament, with the winner facing Murphy at WrestleMania. This tournament will start next week. Tonight’s 205 Live, however, will see TJP vs Humberto Carillo, and Cedric Alexander vs Mike Kanellis.

Vic Joseph is joined by Nigel McGuinness and Aiden English on commentary.

TJP’s technical prowess could be the deciding factor in this match. His wealth of experience dominating a young Carillo looks like the theme of the night, but TJP is thrown off guard when Drew Gulak and Jack Gallagher make their way out from the back. They throw warning glances at Carillo after his aerial displays, but are still encouraging in their own way. It looks like the Submission Commission are here to stay as they “scout” Carillo from ringside.

Interestingly, Carillo is still set in his ways despite the advice he must have received by his “mentors”, as a high flying maneuver sees TJP counter with ease and force. TJP seems focused again after the initial distraction. It should be noted that he, too, incorporates flashy wrestling into his strategy, but regularly following up with technical dominance and precision keeps him on top.

Carillo is struggling in the corner, but blocks the incoming TJP with elbows. He continues to dodge more offense and, with TJP seeking respite on the outside, takes him out with a Fosbury Flop. Bizarrely, Gulak and Gallagher voice their appreciation, no doubt only as his offense is proving successful so far. Back in the ring, a double backflip display by Carillo ends with a standing moonsault and a two count. Gulak and Gallagher like what they’re seeing.

The offense continues, but TJP is no pushover. He turns Carillo inside out with his excellent escapology and has Carillo, eventually, in an STF. Carillo grabs the ropes to break up the hold directly in front of the Submission Commission.

Carillo has been on a roll of late and, with mounting offense, finds himself again in a position to add another victory to his scorecard. The inaugural Cruiserweight Champion finds himself prone in the corner. Carillo does a headstand on the top turnbuckle, contorts himself into a sitting position on the adjacent top rope and moonsaults onto TJP with force, which is enough for the three count for the newest addition to 205 Live.

Jubilant scenes ensue after the match as Gulak and Gallagher come into the ring to raise Carillo’s hand. I can’t help but feel this is just Gulak up to his usual tricks, and betrayal is just around the corner. If I’m being honest, Carillo’s ascent through the ranks at the expense of some 205 Live stalwarts just doesn’t sit well with me. Personally, TJP is an infinitely better wrestler and more interesting character, and his stagnation on the show is a disappointment. Maybe Gulak and Gallagher will see fit to put a stop to Carillo’s rise in the coming weeks!

Tony Nese is backstage now, stating he finally showed Noam Dar how he is the better man in the hugely violent match from last week. Nese makes a promise that he believes in himself again. He will win the tournament, and he will win the Cruiserweight Championship at WrestleMania.

Kayla Braxton approaches The Kanellis couple backstage. She asks how Mike feels heading into his match against Alexander, taking into account his recent losing streak. She wonders if Mike will change his approach going forward. Maria grabs the microphone and asks if Kayla thinks taking the easy way out is how Mike operates. She continues with assertions that Mike will rise to the occasion and take out the Soul of 205 Live.

Daivari is in action next in a return of the mid-show squash match! It is a trope I eventually began to appreciate as it either frequently progressed a storyline or built up a wrestler’s credibility. Daivari takes the microphone and says he will beat his opponent so badly, that the referee will not make the wrong call this time. He takes a dig at the local sports team and says that he’s going to his company’s Superbowl, unlike the New Orleans Saints. I’ll hold my hand up here, this reference is entirely lost on me; I don’t even know how to spell NFL… However some local town bashing in an attempt to gain heat is a universally understood concept in wrestling, and it’s worked.

Daivari has taken on the mantle of Hideo Itami as he lands kick after kick on Lyons. He follows up with his version of the Rainmaker clothesline, and ends the match emphatically with a modified Million Dollar Dream. Interesting how a man who prides himself on his wealth has two finishing moves that have connotations with money. I digress. An easy win for Daivari here.

Buddy Murphy is backstage next, admitting that it must be hard for Maverick to run a brand when you have a champion as strong and dominant as him. Maverick is trying to give Murphy competition. He rings off the names of those who stepped to him and failed. Maverick brings up the tournament now, wondering who will face him on the Grandest Stage of Them All. The segment ends abruptly as the question seems to be a rhetorical one…..oh well!

Alexander panders to the crowd who chant his name. The initial back and forth is tentative as both men struggle to gain the upper hand. Alexander eventually takes control with an armdrag and subsequent arm bar. Kanellis does break free, but Alexander blocks any offense with chops and high landing kicks. He gains the first pinfall attempt of the match.

Kanellis has let his temper dictate his matches in the past, but it doesn’t seem to be here tonight. Alexander is not even out of first gear but, so far, has Kanellis’ number. Mike does up-end Alexander from atop the turnbuckle though, eventually finding his way into the match. That temper is beginning to show itself, as he rains hard elbows down on Alexander’s shoulder. Alexander looks to be in trouble, and a succession of chops and European uppercuts at least starts his comeback, but Kanellis takes Alexander down with an uppercut of his own.

Despite the hard offense landed by both men, the match has seemed plodding so far. Like Alexander, it is still in a low gear. The pace looks to be picking up, but Alexander trips when springboarding off the top rope and falls to the mat. Kanellis takes full advantage and stamps down on the injured leg. Alexander fights through the pain and goes for a Lumbar Check, but the weight on his bad leg is too much for him to follow through with the move.

Alexander is still fighting as much as he can. But Kanellis must see the opportunity that has presented itself to him. A Neuraliser attempt is blocked with a dropkick to the back of Alexander’s head. A small package pin shortly follows, but Alexander kicks out. Kanellis takes Alexander to the ropes, hoisting him up for a successful backpack Stunner but, again, Alexander forces a break.

The former Cruiserweight Champion has tapped into the resolve that kept him at the top of 205 Live for so long. A Michunoko Driver earns him back some momentum, but it’s not enough to keep Kanellis down for the three count.

The pair find themselves on the apron, exchanging high kicks. They then boot each other’s faces simultaneously, and drop to the floor. Their wounded bodies crawl towards the ramp. Kanellis gets to his feet first, and nails Alexander with a spinebuster onto the steel ramp. The referee begins a ten count as Kanellis waits in the ring. After nine and nine tenths, Alexander finally makes it back into the ring.

Kanellis ensures Alexander’s back pain remains, however, with a Boston Crab. Alexander grabs the bottom rope after a long time stuck in the submission. Kanellis blows a kiss towards his wife, but Alexander spots the distraction and throws Kanellis out to the floor, following up with a somersault over the top. Alexander throws Kanellis back into the ring, but Maria blocks Alexander’s path back in.

Alexander finally gets in but runs right into a modified neckbreaker. Kanellis pins Alexander, and the referee counts to three! Maria comes in to celebrate, but the referee recalls his decision, what with Alexander bringing up his shoulder at the last second. The video replay confirms how close the timing was.

As you would expect, Kanellis’ confidence is gone. He swings wildly at Alexander, but the former Champion dodges. All hopes Kanellis may have had are dashed as the Lumbar Check is delivered, and Alexander covers Kanellis for the victory.

I was admittedly cold on the early portions of this match, but it certainly heated up shortly after. The action became frenzied as Kanellis was desperate in his attempt to claim Alexander as a scalp. Hats off to all involved in what turned out to be a dramatic bout.

Drake Maverick is up now with more details on who will wrestle in the tournament’s first qualifying matches. Next week, Kalisto will face Tony Nese, while Drew Gulak takes on old foe, Brian Kendrick.