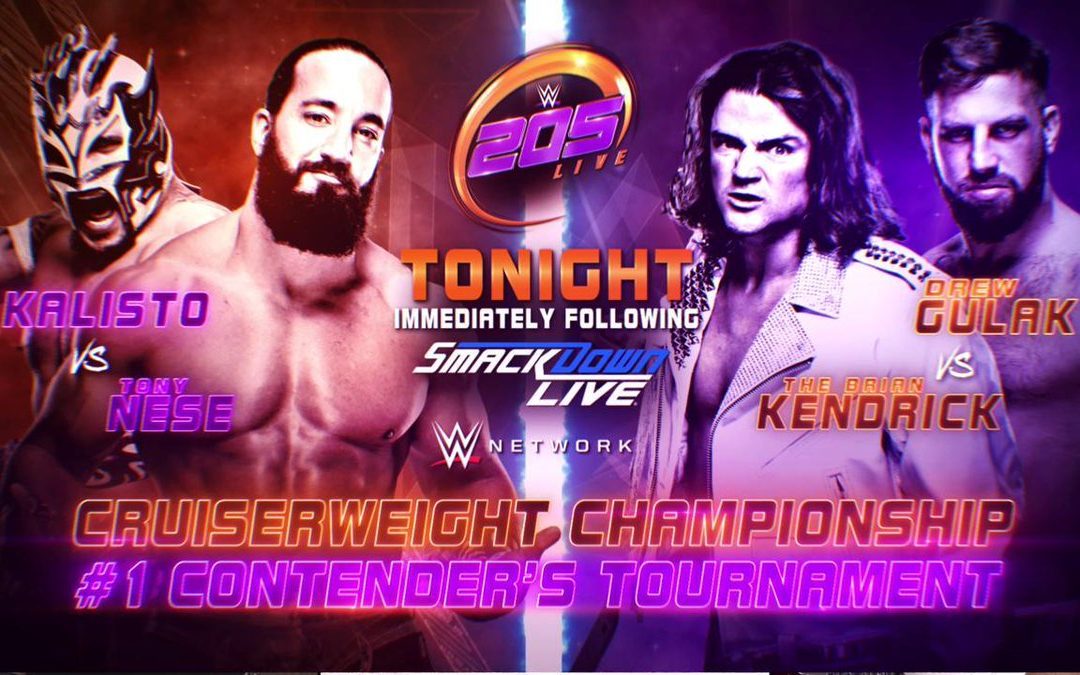 And then there were fourteen! With the departure from the company of TJP and Noam Dar’s seemingly permanent move to NXT UK, the 205 Live active is starting to look thin on the ground. This isn’t the first time the purple brand has had its back against the wall, however. Coincidentally, a Cruiserweight Championship tournament this time last year was what revitalized 205 Live in a similar situation of fan disinterest. Can the same happen again this year?

Four cruiserweights will put that theory to the test tonight. Brian Kendrick takes on Drew Gulak, and Kalisto battles against Tony Nese, in the first night of the tournament to name Buddy Murphy’s WrestleMania 35 opponent.

Once General Manager Drake Maverick starts this week’s 205 Live with the history of tonight’s competitors, individually and against each other, Vic Joseph, Aiden English, and Nigel McGuinness welcome us to proceedings!

The match gets underway after a pre-recorded selfie video detailing Kalisto’s intentions to make it all the way to WrestleMania (much to Nigel McGuiness’ disdain of course).

Nese’s confidence must be riding high after the emphatic victory over Noam Dar two weeks ago, but Kalisto is one wily customer and finds himself in championship opportunities frequently. It’s a tough one to call.

Nese gains the upper hand after the initial feeling out process with an arm drag, followed by a standing armbar. He transfers the strain down towards Kalisto’s wrist, but this affords the former champion the chance to climb the corner and flip out of the hold. He works through a series of more avoidance maneuvres. Nese finds himself on the outside, and Kalisto follows him out with a suicida headbutt.

Kalisto is too fast for Nese as things stand. He is able to evade a Nese clothesline after delivering rapid-fire strikes. He charges Nese at the ringside steps, but Nese regains enough composure to backflip Kalisto over the stairs onto the floor. Nese is now in firm control as Kalisto’s back becomes the focal point of attack. The pair exchange chest chops and elbow strikes at the fan barrier. Kalisto tries to power through, looking for hurricanrana. But Nese holds his strength, swinging Kalisto full force into the barricade.

The speed vs power game is an interesting one, considering both Kalisto and Nese have significant reserves of both. So far, Kalisto’s lucha wrestling style is that which is coming out on top. A low gravity hurricanrana spikes Nese’s head onto the mat back in the ring, stunning Nese momentarily. Instead of capitalizing on this momentum, Kalisto panders to the crowd. This allows Nese to come to. Kalisto finds himself the victim of an open-palmed strike atop the turnbuckle. Nese attempts an elevated German suplex and, despite Kalisto almost countering with a massive Solido Del Rey, is successful. His follow up 450 splash is not, however, as Kalisto rolls out of the way.

Kalisto imitates the 450 and lands it. His pin is secure, but Nese manages to get his foot on the bottom rope as the referee is inches away from counting to three. Kalisto is fired up. “Lucha” chants break out. He repeatedly looks to end the match, but Nese is desperate to advance towards WrestleMania. After a succession of counters, which sees Kalisto worm and wriggle his way out of many of Nese’s power moves, Nese eventually destroys Kalisto with a devastating wheelbarrow suplex, the luchador’s head crashing off the bottom turnbuckle.

Nese wastes no time in setting Kalisto up in the bottom ropes. He backs up, runs full speed, and nails Kalisto with the Running Nese. He covers him for the pin, and the referee counts to three.

The Premier Athlete advances to the next round of the tournament! In a previous life, Nese may not have been able to overcome the speed and wiliness with which Kalisto approaches his matches. But this is a different Nese, one who had an answer for almost everything Kalisto threw at him. A fine match, accented with an exemplary Nese performance. Buddy Murphy was watching backstage and is over the moon with his friend’s advancement. But is he overcompensating, hiding a fear at what could be in store for him should Nese make it to WrestleMania?

Up next, Jack Gallagher is showing Humberto Carillo footage from his most recent match. Gallagher gives advice on what he would have done differently. Gallagher offers Carillo a chance for more learning, as they both head to presumably the Gorilla position to watch Mr Gulak in the main event.

Elsewhere, Akira Tozawa is offering Brian Kendrick words of encouragement, as the Man With the Plan faces off against his betrayer from last year. Footage is shown of Mike Kanellis’ near victory over Cedric Alexander last week. Maverick is backstage with Mike and Maria. Maverick is clear that the referee’s decision (to reverse Kanellis’ pinfall after spotting Alexander’s shoulder popping up before three) is final. Maverick calms them down. He tells them to go home, and he will have a match for Mike on 205 Live next week. The Kanellis’ seem placated. It should be noted, though, that Maverick didn’t specifically say it would be a tournament match…

Gulak’s last 205 Live outing was an unfortunate loss to Akira Tozawa. Despite this, Gulak always exudes confidence. Can he overcome the loss by defeating Tozawa’s partner tonight?

The start of the match is very tentative. Gulak is undoubtedly dangerous with his grappling arsenal, but Kendrick has more than enough tricks up his sleeve. Gulak eventually has Kendrick grounded with pressure on three (count them) of his limbs held in unforgiving positions. Kendrick powers out as the fight or flight chemical reaction takes over.

Aiden English puts it perfectly when he says this will be a chess match. So familiar are they with each other, and so storied are their previous interactions, they circle one another, unsure of how to gain the upper hand. Gulak is the first to do so as the incoming Kendrick receives an explosive German suplex for his troubles. Gulak applies a modified Boston crab, and it looks like a bad one. Kendrick realizes the danger he is in, and scrambles for the bottom rope. Kendrick fights out of Gulak’s demonstration of various submissions with two arm drags, bringing Gulak to the mat with his own hold. Gulak rolls through and answers with a bar of his own. Kendrick is doing his utmost to overcome Gulak, but the Philadelphia Stretcher is dominant for the majority.

Kendrick resorts to brawling tactics with clotheslines and dropkicks. It is working to an extent, but his offense comes off as labored after the earlier German suplex. Gulak thwarts Kendrick’s advances, trapping his leg behind him and delivering another German. Kendrick is in trouble. A dragon suplex from Kendrick comes out of nowhere, but Gulak is seemingly not phased as he pops up and answers with a powerful lariat.

Gulak almost applies the Gulock, but Kendrick rolls backward in a pin attempt to give him some time. Gulak kicks out but finds himself in Kendrick’s Captain’s Hook submission. All of a sudden, Gulak is in danger. He senses this too, as he hooks Kendrick’s nose. Kendricks’s hold is loosened, and Gulak earns a pin attempt after a heavy powerbomb.

A series of counters and reversals ensue. Gulak kicks out of an inverted matchbook pin, affording him the chance to lock in a modified dragon sleeper. Kendrick has absolutely nowhere to go, his trapped legs ensuring he is truly ensnared in Gulak’s hold. It’s not too long before Kendrick   the inevitable and taps out. Gulak advances to the semi-finals!

A Gulak match is more often than not a great one. This was no different. His combination of submission and power wrestling is a style I hold close to my heart. Kendrick played the plucky underdog throughout, and it was a shame to see him eliminated so early. But I personally feel Gulak has had the short straw too often on 205 Live. It’s time for Gulak to, at the very least, challenge for what he deserves.

As Gulak celebrates on his way up the ramp, the commentary team announce next week’s matches. Cedric Alexander will take on the reinvigorated Akira Tozawa, while Humberto Carillo faces NXT’s Oney Lorcan!

Make sure to check out the latest “Ricky & Clive Wrestling Show“. The next episode will be available on Wednesday night but, before that, Ricky and Clive sat down to discuss what was a fairly positive night for WWE ten days ago. Elimination Chamber was bookended with two Chamber matches that were fantastic for very different reasons. The middle portion of the show wasn’t too much to write home about, but it definitely had its talking points. We then move onto the TV from this week, which saw appearances from basically the men’s main event scene of NXT, which had a lot of people talking. WrestleMania is beginning to take shape, and we’re here to get you pumped! We finish with a “First Time Ever” quiz