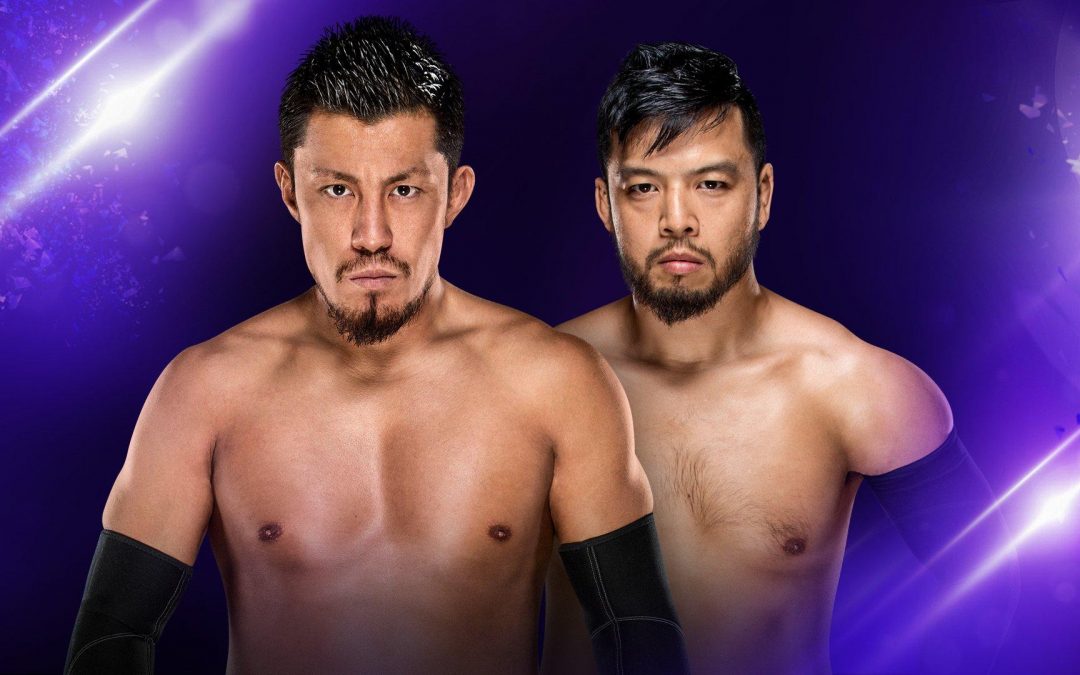 This week’s 205 Live opens with the video from last week showing how Akira Tozawa and Hideo Itami were once on the same page, but are now on diverging paths. Itami brags of once being a hot Japanese export but was then put in a tag team he claims he didn’t want to be a part of. He then unfairly blames Tozawa for their losses in recent tag team matches. Itami looks to settle this once and for all in tonight’s main event.

As well as the aforementioned match, the commentary team of Vic Joseph, Nigel McGuinness, and Percy Watson hype next week’s Cruiserweight Championship match between Cedric Alexander and Buddy Murphy. 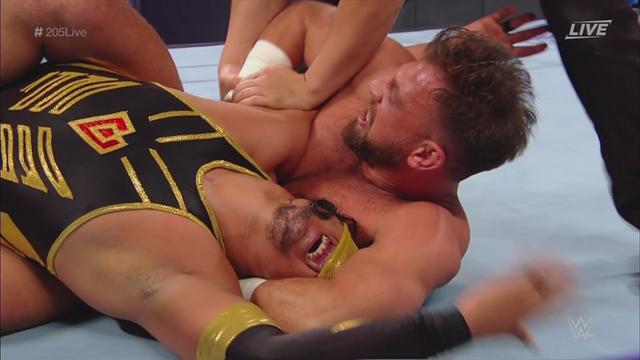 As Gulak makes his way to the ring, the screen cuts to a pre-taped video of the Philadelphia Stretcher vowing to continue his crusade against each member of the Lucha House Party individually, looking to add this week’s opponent to his list of casualties. After Metalik comes to the ring alongside his stablemates, Brian Kendrick and Jack Gallagher also come down the ramp to join the commentary team in calling the match.

Gran Metalik takes early control of proceedings by using the ropes for varying offense. Gulak regains some of that control however by sweeping Metalik’s legs out from under him on the turnbuckle and taking advantage of the luchador who is in a Tree of Woe position. Gulak then throws Metalik outside and during the rest, Lince Dorado and Kalisto taunt Gallagher and Kendrick yards away with their Bandero de México emblazoned noisemakers.

Gulak has Metalik back in the ring, displaying his intelligence to avoid Metalik’s disorientating offense. Metalik lands a deafening slap on Gulak’s face. Like a raging bull, Gulak charges Metalik on the apron, but his momentum carries him out under the bottom rope, as Metalik simultaneously capitalizes with a springboard moonsault onto Gulak outside.

Back in the ring, and Gulak is able to channel his anger at being bested with the wrestling style he abhors by way of a vicious clothesline. This only rocks Metalik momentarily, however, as the luchador finds an opportune moment to run half the length of the ropes and dropkick a prone Gulak in the opposite corner. Gulak seems to be struggling with Metalik’s use of the ropes as a silent tag-partner; a step up in competition from Gulak’s domination over Kalisto two weeks prior.

Several attempts to swing momentum Gulak’s way only work in Metalik’s favor. But as Jack Gallagher mentions on commentary, when Gulak desperately props up his feet in time to meet an incoming Metalik, the Mexican goes “to the well once too often” with his aerial displays. Gulak wastes no time in applying his dragon sleeper finisher- the Gulock – for a submission victory.

Gallagher and Kendrick applaud Gulak from ringside, further hinting at a possible alliance between the three like-minded men.

We now have a video with Buddy Murphy making clear the real possibility that he will beat Cedric Alexander next week for the Cruiserweight title. The impressive training regime throughout the video ends with Murphy claiming that “you can’t stop the unstoppable”. We then cut to an angry Akira Tozawa preparing for his match against Video Itami later in the show.

Despite a distasteful cockiness, TJP has shown in his recent matches just how superior his technical game is on 205 Live. Tonight is no different, as he embarrasses his opponent, Christopher Guy, with a dominant array of transitional holds and suplexes.

The crowd shows their disdain for TJP’s attitude. This seems to have temporarily rocked him as Guy gets in some minor offense. But this doesn’t last long. At all. TJP locks in some more anatomy straining stretches then finishes his opponent off with a Detonation Kick for a very quick victory.

Dasha Fuentes comes into the ring and interviews TJP regarding his controversial comments on social media, claiming that he isn’t all that busy on Tuesday nights and appealing to Smackdown Live General Manager, Paige, for a chance to wrestle on the blue brand. TJP explains that he wasn’t only the first Cruiserweight Champion, but he was the best. He goes on to say that he carries the division on his back and closes by claiming that if Christopher Guy is the only competition given him, then it shows what 205 Live General Manager, Drake Maverick, thinks of him.

Following screenshots of quotes from Twitter professing that Cedric Alexander vs Mustafa Ali on the recent European Tour was often considered the match of the night by fans, a pre-tape has Vic Joseph interviewing Cedric Alexander. Joseph asks how Alexander is dealing with the pressure of being the champion, especially with him defending the Championship in front of his hometown (and his friends and family) next week. Alexander reminds everyone that he too had to cut weight to make the Cruiserweight Division. He says he will exploit Murphy’s lack of stamina; something he learned to work on a long time ago. Alexander says there is a reason why he is the Champion, and he will remind Murphy next week why we are in the Age of Alexander.

Backstage footage shows Hideo Itami, looking focused and intent before he makes his way out for the main event. 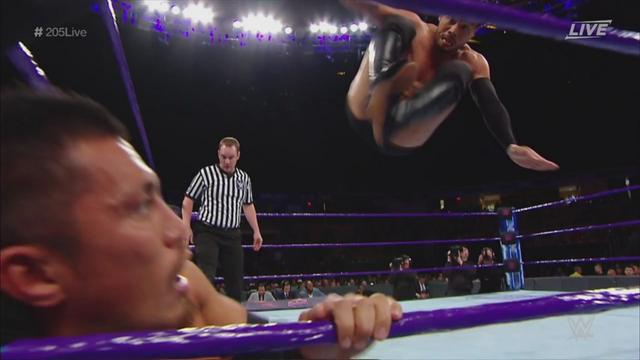 Both superstars have the same mindset early on as they look to apply similar strikes to the body and limbs. A stalemate demonstrates the familiarity that the Japanese Superstars have for each other due to their time as a tandem.

Chest chops are thrown back and forth, landing with increasing vitriol each time. Tozawa feigns a final strike and as Itami blocks the incoming blow, he lands a closed fist jab. He shows an early dominance over Itami. The WWE audience show whose side they are on, responding in kind to Tozawa’s trademark caws.

A rear chin-lock has Itami neutralized. Tozawa’s early control hasn’t rocked Itami however, who is able to escape and quickly climb the ropes to stomp on the back of Tozawa’s head. With Itami now in charge, he shouts his galling demand for respect, which is not appreciated by the crowd.

Itami takes the action outside, throwing a staggering Tozawa into the barricade. He volleys Tozawa in the chest before nonchalantly throwing him back into the ring for a near fall. Tozawa then escapes Itami’s own chinlock, the theme of imitation taking shape in the match. However, Itami begins to focus on the midsection with hard-hitting boots and knees. Despite his cries for respect, Itami shows none of his own with more kicks to Tozawa’s head, mimicking his former partner’s warcry.

Tozawa is in serious danger now as Itami’s focus of attack moves from the torso to the face. Itami amplifies the danger by removing his knee pad, but Itami decides to inflict more pain on Tozawa rather than finish him off, planting him with a Tornado DDT for another near fall.

Sensing danger, and with the crowd firmly behind him, Tozawa begins to fight back, leveling Itami with a Shining Wizard knee. Itami is able to escape Tozawa’s senton bomb finisher by rolling out to the floor, but Tozawa keeps the momentum on his side with a running somersault off the apron. Itami is rocked by the sudden barrage of offense.

After a series of labored strikes are thrown, Itami’s bitterness brings about its own comeback. Following a tornado guillotine of sorts, and a flying clothesline, Itami becomes fevered in his attempt to end the match with a Rings of Saturn. An inside cradle by Tozawa catches Itami off guard. Tozawa looks to ultimately capitalize on the surprise with another top rope senton bomb, but once again is unable to deliver.

Both men are on the top rope and exchange tired strikes. Itami gains the upper hand with a devastating Falcon Arrow brainbuster off the top rope, but Tozawa digs down deep and kicks out of a close two count. Itami’s anger seems to cloud his judgment as Tozawa ensnares him in an octopus submission. He manages to escape to the outside but ends up on the receiving end of Tozawa’s signature suicide missile headbutt.

Tozawa throws Itami back in the ring to finally deliver a senton bomb. He takes to the air, but this proves fatal for Tozawa as Itami rolls away from the impact just in time. Itami capitalizes with a hesitation dropkick, and to add insult to injury, inflicts another. He drags a stunned Tozawa to the middle of the ring, turns him inside out by the neck, and drops him with a Codebreaker variation for the win.

205 Live closes with Itami bragging about his victory in the ring, as Tozawa is propped up outside against the apron, looking thoroughly beaten and dejected.

Is this the end of the feud between Itami and Tozawa? Are Drew Gulak, Brian Kendrick and Jack Gallagher forming an alliance? Feel free to drop your comments here or wherever you read this on social media. You can find me on Twitter and in Social Suplex’s Facebook group. You can read more of my columns right here.