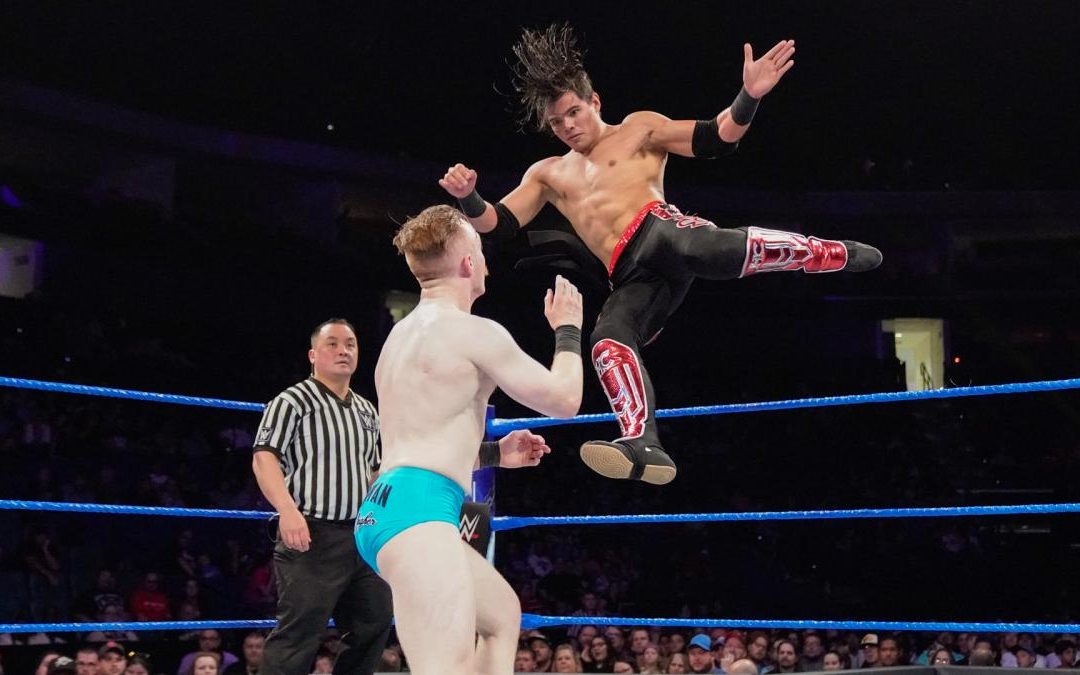 This week’s 205 Live starts with Jack Gallagher backstage watching his and Humberto Carillo’s tag match against The Singh Brothers from last week. Humberto joins Gallagher and they reminisce about the victory. Gallagher is contemplative, however. He can’t seem to shake that Humberto has a victory over him and wants to put that to rights.  Humberto is happy to oblige with a rematch, stating it would “be a pleasure to beat him again”.

So there we have it. Your 205 Live main event is set. Maybe I’m spoiled, but at least one match is usually set up well in advance of the show actually starting. The friendly competition between Gallagher and Carillo is a strange one, too, and I’m unsure if it is actually going anywhere. What I have felt for a while now is that the cruiserweight division seems to be experiencing a creative lull.  Writer’s block, if you will. Time will tell over the coming weeks, but the overall direction of the show has left a lot to be desired.

What does seem to have an unwritten back story to it is this match. Brian Kendrick, a vocal friend, and supporter of Akira Tozawa has had his loyalty to Tozawa questioned by Mike Kanellis. Mike and Maria have battled with Kendrick and Tozawa for some time now. This singles match has been brewing in the background if it hasn’t been handed to us on a plate.

It would appear having his loyalty questioned has lit a fire under Kendrick. He charges his opponent before the bell has even rung out. The anger boils over as Kendrick, for want of a better term, wails on Kanellis. The tempestuous tone to the match continues for a spell as the two spill to the outside. Kanellis is able to turn fortunes his way with a suplex of Kendrick into the fan barrier. The match slows down immediately as Kanellis systematically wears Kendrick down back in the ring.

All the adrenaline Kendrick will have had heading into this match is sapped out of him. By the headlock, the chest chop, the leg lariat blocks. You name it, Kanellis is in control.

Whether complacency or surprise comes to the surface, however, Kendrick grabs Kanellis, pulling him down for the Captain’s Hook submission. Kanellis breaks free but is rocked by the sudden attack. He crawls out through towards the stairs, but Kendrick is all over him like a rash. Kendrick sets Kanellis up and suplexes him from the stairs to the floor.

Back in the ring, and another Captain’s Hook is applied. Pure power is what Kanellis resorts to in order to break the hold, standing up with Kendrick on his shoulders and flooring him with a fireman carry slam (yes, basically a sit-down Attitude Adjustment). On separate occasions now, both men have reversed momentum with sudden displays of either agility or power. It is an intense encounter, to say the least.

The pair exchange a series of superkicks before Kendrick gains the upper hand, again, suddenly. He takes Kanellis over to the ropes, scaling them as he delivers a Sliced Bread 2.0 He goes for the cover, but Kanellis is close enough to reach beneath the ropes. Fortune may be on Kanellis’ side, but so is sheer power.  Again, once back on his feet, he levels Kendrick with a further sit-down Attitude Adjustment. He follows up with a swinging reverse neck breaker, which is enough to see Kendrick off.

This was one hotly contested affair. Whilst the build to this was cold, if not non-existent, the pair clearly tapped into where their characters have been these past few months and what they have both experienced. All those emotions rushed to the surface in a fiery encounter. Dare I say it has lifted my mood and suppressed my apathy towards 205 Live for the time being! Thank you, gents!

Aiden English, Nigel McGuinness, and Vic Joseph discuss the Lucha House Party vs Lars Sullivan match scheduled for Super Showdown…..before taking us backstage to see General Manager Drake Maverick talk with Cruiserweight Champion, Tony Nese. It’s nice to see Maverick remembers that he has another job, other than fruitlessly chasing the 24/7 Title around to no avail.

Nese is frustrated. He doesn’t want to sit on the sidelines and wants to discuss this with Akira Tozawa, who comes in from the side. Nese has been impressed with Tozawa of late (haven’t we all). Nese formally requests of Maverick that Tozawa becomes the official number one contender for the Cruiserweight Championship. Maverick, however, has a lot on his plate. He doesn’t want to make any rash decisions, but he’ll get back to them both in due course with an answer.

This. This is one of the tropes that has tested my patience with 205 Live of late. A wrestler comes of age in a fantastic multi-man match, only having to jump through more hoops in order to actually warrant a championship opportunity. It happens more than you would think on the show, making championship contentions cyclical in nature. Maverick, too, is clearly preoccupied. If he wants the 24/7 title so badly, then fine. But if it comes at the expense of his General Manager duties, then it’s time someone else steps in. Both in kayfabe and in reality, a shake-up is personally overdue with regards to the structure of 205 Live.

Ariya Daivari is up next, being tended to by a doctor. Daivari dismisses the apparently inexperienced individual. Daivari proclaims having unfinished with Oney Lorcan, who gave him stitches in last week’s 5-Way. He vows to be the one to give Lorcan stitches the next time their paths cross.

Mr. Dar has made his way across the pond from NXT UK duties, a place where Dar seems to fit a lot more naturally, for a match against some local talent. This doesn’t seem to bother Dar, who is having fun at Mike Karma’s expense.

Dar frequently tosses his opponent around and outside of the ring. Cockiness and arrogance come back to haunt him for a total of 3 punches from Karma, but Dar resorts to humiliating Karma. A Nova Roller kick earns Dar the very easy victory.

Vic Joseph puts an exclamation mark on the match by “welcoming back” Dar to 205 Live. So it would appear he has returned to 205 Live full time? Sarah Schreiber interviews Dar in the ring, asking if he back on track. Dar blames any supposed setbacks on jetlag as he travels back and forth between two continents, dealing with all the “dafties”. Hometown bashing intensifies as the interview comes to a close. So Dar is back on 205 Live then…..there you go.

Maverick is accosted backstage for comment on the championship scene. He again refuses to pass comment, but sees R-Truth further down the corridor. Naturally, Maverick makes a beeline for the 24/7 champion.

Oney Lorcan is up next, offering apologies to Daivari for the stitches. Lorcan says Daivari looks unbalanced and will give him another set of stitches to even things out. Wow. This was wooden. Lorcan has little to no charisma as far as promos are concerned. It’s a shame to see, considering how magnetic he is in the ring. There is a certain mystery to Lorcan, but that is being uncovered and unraveled. Personally, 205 Live has exposed a weakness in Lorcan’s overall presentation I didn’t want to see. I had high hopes for Lorcan on 205 Live but, the more he is on the show, the more bewildered I become, feeling this was not a good acquisition for either party.

The story with Carillo has been relatively interesting over the course of 205 Live. His learning of a more technical game with the help of Drew Gulak and Jack Gallagher has indeed seen him become a more versatile performer. It’s good to see, in all honesty. Someone of his size and stature is effective when administering a physically overbearing offense. This comes to the fore in the early stages of the match, taking the “groundsman to the ground”, as Aiden English so eloquently puts it.

Gallagher taps into his Houdini with an impressive escape from a head-scissors headlock, but Carillo stays on his opponent with wrist locks. Gallagher evades further offense with his patented handstand on the top turnbuckle. Carillo mirrors the move, showing he is not intimidated by Gallagher’s mind games.

Once the jollies are over with, Carillo continues to show technical prowess and strength. Gallagher is becoming frustrated with being out-wrestled by his student. He launches Carillo into the barrier on the outside, before throwing him back in the ring to inflict more punishment.

This is what I like about Gallagher. Despite being clearly undersized in comparison even to his fellow cruiserweights, his offense looks truly damaging. He looks like a force. The snap suplex to Carillo shows just how strong he is. Carillo’s early momentum is all but gone as the “gentleman” shows nothing of the sort of what his moniker would suggest.

Carillo eventually fights back with some punches and a backdrop. Knowing that the technical game won’t best Gallagher, Carillo reverts back to what he feels more comfortable in, that being the luchador style. This is where my patience with Carillo begins to wear thin. For someone with as big a frame as Carillo, whose physique leads you to believe that considerable strength is within, you would expect his luchador game to have a significant impact. But the majority of these moves just don’t have that particular oomph to them.

There are flashes of crushing impact to his moves, the monkey toss of Gallagher into the fan barrier for instance. But the missile dropkick that follows looks like Gallagher has to do most of the donkey work to make the move look effective. It’s frustrating to see. I know there is a mobile powerhouse in Carillo somewhere, but I am yet to see this come to fruition.

The closing stages of the match are indeed exciting, and I do eat my words in this instance. Gallagher has Carillo up for a stalling suplex, but Carillo counters with a truly brutal DDT. He also seems to have rid himself of that awkward finisher and replaced it with a top rope twisting splash. The damage he does have in his arsenal pays off on this occasion as he covers Gallagher for the three count.

On the surface, this was a good match. Very good, in parts. Carillo has improved over time. But as agile as he is, Carillo’s luchador style is just not that believable, in my opinion. Maybe that’s what Drew Gulak was getting at this whole time.

As you’ve read today, I’ve been a lot harsher on 205 Live than usual. I guess the minor complaints have been all too frequent and accumulative, with them all coming to a head this week. There were two very engaging wrestling matches, as is normally the case every week.

Nevertheless, these are all surrounded by plot devices that 205 Live relies on too often, showing no sign of growth. The innovation in the ring is clear for all to see. Outside of the ring is another, more concerning matter entirely.

Elsewhere in 205 Clive land, the third match of the Quiztime Invitational has arrived. Friends of the show and Lords of Pain personalities, “Implications” and “Sir Sam”, battle it out in a wrestling trivia only podcast to see who will advance to the semifinals. Who will be the Lord, and who will suffer Pain? Listen now to find out!