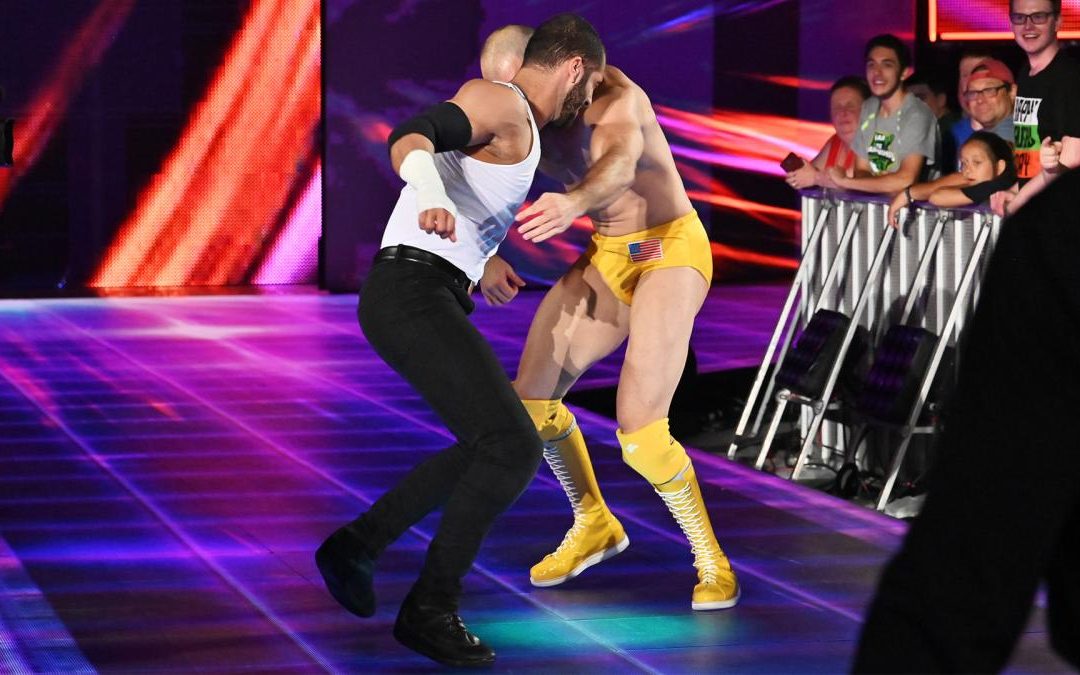 After a week’s vacation, your resident 205 Live mark is back in business. Last week’s show was actually a rare and welcome deviation from the norm, in which three separate feuds came together as one in a fiery tempered six-man tag match (Lorcan, Nese & Gallagher vs Gulak, Daivari, & Kanellis), that broke down into an all-out brawl after Nese picked up the victory for his team.

It was in moments like this that you realize there are actually storylines up and down the card. Six-man tags may be a tired formula in some areas of WWE, but I would welcome them with open arms on the Cruiserweight show.

Onto tonight’s 205 Live, the final episode before Tony Nese looks to take back the Cruiserweight Championship from Drew Gulak, Oney Lorcan and Ariya Daivari’s rivalry reaches boiling point in an “Anything Goes” match.

We get a preview of this match as, whilst Lorcan addresses the camera with the “rules” of the match at the start of the show, Daivari sneak attacks from the side. A mini-brawl ensues before Drake Maverick and other officials split them up. We will also get a sit-down interview with Humberto Carillo, and Jack Gallagher is in action. But first…

Earlier on in the day, the Singh Brothers accosted Brian Kendrick during an interview, seemingly offering him a “Boscar”, or whatever the hell they’re called. Kendrick wants none of it, wanting to take out his frustrations in the ring.

Sunil is the lucky one who gets to face the 205 Live veteran. The crowd is firmly behind him as he watches on incredulously as Sunil dances around the ring. After gaining an early upper hand, Kendrick gives us a taste of his own Bollywood shape cutting. The action quickly spills to the outside. A distraction from Samir Singh allows his brother to take advantage.

Back in the ring, and Sunil lays waste to Kendrick with a series of strikes, dancing all the while. Some illegal interference from Samir continues as Kendrick is caught in the ropes, cutting off the ref’s vantage point. Sunil keeps Kendrick grounded with a rear chinlock, then moves up a gear with a backbreaker knee. Sunil takes off from the second rope, but Kendrick moves out of the way just in time. The comeback is on.

Kendrick strings together some offense, looking for his Sliced Bread finisher. Sunil blocks it, looking for a suplex. Kendrick’s experience shines through, however, as he twists Sunil up and over into the Captain’s Hook submission. Sunil taps out almost instantly.

After the match, Samir comes in and attacks Kendrick. The tandem beatdown lasts for only a short spell, for Akira Tozawa’s music hits as Kendrick’s long term friend and tag partner come to make the save. It looks like our next Singh Brothers program is in the works. I can’t say I’m over the moon with this. The Singh Brothers aren’t doing much for me so far. They do, however, seem to be moving up the totem pole of 205 Live stars. Maybe working alongside more accomplished characters might bring something out of them.

As always, the commentary team for tonight is Vic Joseph, Nigel McGuinness, and Aiden English. They introduce us to the first in a three-part video series on Humberto Carillo. The young Superstar gives us some information on his early years and his love for wrestling.

Jack Gallagher has his chance to showcase his skills against enhancement talent this week. The problem with this is that Mr. Gallagher needs not showcase anything. He is already a well-established star and we do not need reminding of his prowess. To be fair, this match is the equivalent of playing a computer game against the easiest AI. Some frivolity ensues as Gallagher literally ties Justin up in the ropes, all so he can charge in with a hesitation dropkick.

Justin sprawls free but takes a stalling suplex for his troubles. Gallagher squares up for his turnbuckle dropkick. Before he can do this, Mike Kanellis makes his way to the ringside area through the crowd. Over and over he screams that he will ruin Drake Maverick’s show. He trashes the area before management comes to take him away.

Gallagher is understandably distracted. So much so, that Justin gains a sneak roll up on the Gentleman. Luckily, Gallagher comes to his senses. the wake up call sees him deliver a crashing headbutt to Justin’s collarbone. Justin falls to the ground like a ton of bricks, and Gallagher folds him up for what could have been a three hundred count if he so desired.

Mike Kanellis is approached backstage by Drake Maverick. Maverick is sorry for all that Kanellis is going through. He admits neglecting his duties as General Manager due to his 24/7 Championship hi-jinks. Kanellis blames Maverick for all of his problems. He ruined Mike’s life. Regardless, Maverick says he’ll fine Kanellis for his actions. Kanellis says he’s scheduled to wrestle on 205 Live next week. He threatens Maverick by saying he can’t wait to see how much he’ll fine him based on what he does next week.

Sometimes, feuds lack something interesting. Sometimes, the writing team will continue with a feud despite the lukewarm reaction. Sometimes, the simple inclusion of hardcore rules is what is needed to bolster interest. Simply put, this has been one of those feuds. What started as an aimless meander has turned into a battle of the hot-heads. Daivari has gotten under Lorcan’s skin to the point that the only way to defeat the other is through violence.

Lorcan doesn’t even wait till Daivari has made his way down the ramp as he charges up from the ring for the attack. The bell eventually rings, and Lorcan crashes Daivari’s face onto the steel steps. Lorcan sifts underneath the ring, finding an oh so handy pile of chairs to throw into the ring.

Daivari is repeatedly charged upon in the corner like an unlucky matador. Lorcan takes a break to set up a chair, but Daivari sees a chance. He spills Lorcan to the outside and plants Lorcan’s face onto the commentary table. As Daivari goes under the ring to bring out a large and heavy chain of all things, Lorcan rushes round and hits a suplex onto the floor. he whips Daivari into the fan barrier, but Daivari reverses it. He throws Lorcan into the ring, then brings a ladder out from underneath. Quite the array of weapons tonight!

Lorcan gets tangled up in the chain, cutting off his air supply.  All the while, Daivari props up the ladder in the corner. He stalks Lorcan, nailing him with a chop. An Irish whip is reversed, and Lorcan launches Daivari into the ladder. The ladder is now set up in between the middle and top rope. Lorcan looks for a suplex onto it, but Daivari blocks it. A chop rings out, and Lorcan sits on the ladder cradling himself. He recovers quickly, whipping Daivari into the opposite corner,  and hip tossing him onto the ladder.

A half and half suplex is Lorcan’s next wish. Daivari strikes Lorcan, however, Lorcan sitting down on the chair in the middle. Daivari charges the ropes then towards Lorcan, who is playing possum and nails Daivari with a drop toe hold, his face smashing off the chair. Lorcan hauls Daivari to his feet and lands a series of stiff uppercuts. The sequence ends with a blockbuster, a running uppercut which spills Daivari to the outside, then a somersault over the top rope onto Daivari.

“We want tables” rings out from the crowd. Lorcan acquiesces immediately, pulling a table out from under the ring. “Yes” chants start now. Daivari hits Lorcan with a superkick, however, as Lorcan attempts to climb through the ropes back in. Daivari runs along the apron, but Lorcan magics a trashcan out of nowhere, launching it up and into Daivari’s midriff. Lorcan then throws Daivari spine first into the steps. He then throws a multitude of chairs on top of Daivari. He sets an ominous structure of chairs on the opposite side of the steps.

As the structure grows, Daivari comes to and hits Lorcan with a trashcan lid. Daivari takes Lorcan onto the steps, looking for a suplex onto the chairs. Lorcan punches him off. Lorcan, instead, goes for a powerbomb! Daivari senses the danger though, hoisting Lorcan up over his back and sending him through the structure. Ouch!

Daivari brings Lorcan into the ring and unfolds the table. He then sets up the ladder (for its actual purpose) and begins to climb. A massive Persian lion frog splash onto Lorcan from the second top rung, and we have our first pinfall attempt. Lorcan kicks out, to Daivari’s dismay. Daivari then brings another table into the ring. This one’s leg breaks, but Daivari is not phased as he simply brings a third into the mix. He props this up flush with the first.

Lorcan is sprawled atop the two tables, as Daivari climbs the ropes. Lorcan charges up the ropes, and snap suplexes Daivari through the tables. The snap suplex was a great way to really drive home the impact of this finish. Lorcan lays an arm over Daivari, and the referee counts to three. Oney Rules!

This was a fine weapons match, which is usually the case on 205 Live. Even in defeat, this match has done wonders for Daivari, and he gained from me a lot of respect. Lorcan, too, has come into his own, showcasing his strengths and hiding his weaknesses. Good stuff, well worth a watch!

To finish the show, we have an extended hype video for Tony Nese vs Drew Gulak at Extreme Rules. Both men have been on 205 Live since the very beginning. Naturally, a friendship blossomed early on, but so has that friendship been broken. They have been on the same team, and they have warred with each other. They have a win apiece over each other in number one contender tournaments, and both matches were a milestone in each men’s careers and character developments. The story for this match at Extreme Rules writes itself, but the hype video is excellently done and sets the stage very well for this Sunday.

There we have it. Another episode of 205 Live is in the bag. Drew Gulak has himself a busy weekend, facing Matt Riddle for the EVOLVE 10th Anniversary Show and then Tony Nese at Extreme Rules on Sunday. For fans of Network exclusive content, Gulak is certainly in the spotlight. I predict at least a 50% success rate over the weekend. Tony Nese retaining the title so quickly is almost unprecedented on 205 Live, and I see (and hope) his reign lasts a long long time!

Check out the latest Ricky & Clive podcast. The final match of our Quiztime Invitational first round has arrived. Friends of the show Rob Ropie and Darren Kirkby battle out to see who is, in their own words, the least worst of the two. Despite their low confidence, both contestants put in a shift. Who won? And did it go the final question for the fourth match in a row? The semifinals are just around the corner. Listen now to find out who joins our other lucky three.