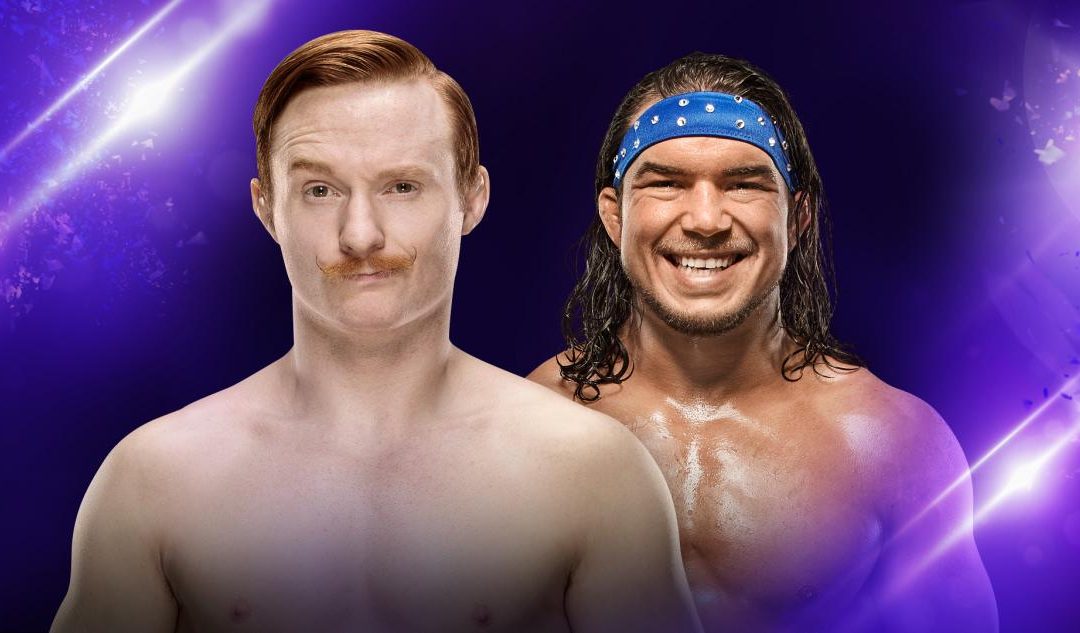 After a hard fought loss to Matt Riddle at Evolve 131, Drew Gulak was unphased as he made quick work of Tony Nese to retain the Cruiserweight Championship at WWE Extreme Rules. Nese had no answer for what Gulak brought to the table and even looked rattled as the Philadelphia crowd were firmly in their native Gulak’s corner.

On 205 Live this week, we’ll have the fallout from Sunday’s match, and what’s in store for Gulak heading towards Summerslam. Elsewhere, Chad Gable returns to 205 Live to ensure his rematch with Jack Gallagher doesn’t end in controversial fashion like last time.

After a highlight package of Sunday’s Cruiserweight Championship match, Drew Gulak opens the show. For months, everyone else was fine with Nese being the pinnacle of the Cruiserweight Division. How sad, Gulak Says. Nese dared doubt his legitimacy. Well, Gulak has proved otherwise. He tightens his grip on the title more and more every day. Who dares to step up next, now that we know what kind of pain and punishment awaits? Welcome to Drew’s 205 Live.

As expected, the tag team program between the Singh Brothers and Akira Tozawa and Brian Kendrick (who accompanies Tozawa to the ring tonight) is in full effect. Expect some clean and dirty finishes along the way. Expect a rubber match of some sorts. Expect that match to have a stipulation of sorts also. Rince. Repeat. Sigh.

Samir Singh puts the boots into Tozawa early on, but Tozawa fights back quickly with some chest chops, and a feigned hook followed by a strong jab. He stalks Samir into the corner, but Samir plays possum, felling Tozawa face first into the bottom turnbuckle. An Irish whip hurls Tozawa into the opposite corner. Tozawa fights off a chin lock, hoisting Samir off his shoulders and splashing him face first onto the mat.

Samir goes outside to compose himself. Tozawa sees an opportunity. He sprints along the apron, vaults off the steps, and somersaults onto Samir into the barrier. He takes Samir into the ring and goes for his top rope senton. Sunil with the distraction on the outside and Kendrick naturally coming over to even the score.

Tozawa is savvy to what is going down, however, dodging out of the way of an incoming Samir attack. He rolls up Samir for a quick victory.

Sunil enters the ring. He and his brother beat down on Tozawa, but Kendrick comes to his partner’s aid before Sunil can hit Tozawa with the “Boscar”. The Singhs end up on the receiving end of the beatdown before retreating. I may not be all for a program between these four, but if it
means Tozawa and Kendrick stand tall every week, I’d be selfishly happy with that.

Up next, part two of three of the Humberto Carillo super-push vignette package. He goes over how happy he is to be on 205 Live, and that there is only one thing on his mind: the Cruiserweight Championship. I’ll be brutally honest, Carillo is simply not ready to even challenge for the purple reins, let alone take them. Let’s just hope his aspirations are the usual young spritely wrestler’s bluster.

Things have not been going well for Mike Kanellis of late. At all. Losing streaks in the ring. Questions over his manhood by his own pregnant wife. No wonder this poor jobber, James, feels the wrath of Mike’s frustrations over the past few weeks. Temper isn’t the right word for Mike’s display tonight. Exasperation might be more appropriate. Big boots. Chest Chops. A series of running the ropes and clotheslines. Kanellis decides to put his victim out of his misery with the spinning neckbreaker.

After attacking Jackson James one more time, Mike grabs a microphone, calling out 205 Live General Manager, Drake Maverick, who acquiesces. He’s done going into Drake’s office. He wants to say what he has to say in front of the audience. Kanellis could have gone anywhere when his contract was close to expiring a couple of months ago, but he decided to stay. He wanted to prove to his wife that he is the best by becoming the Cruiserweight Champion.

He also wanted to stay so he could kick Drake’s arse. Maverick wants Mike to take accountability. The reason Mike isn’t where he wants to be on 205 Live is because of him. Things are getting heated between the two, especially after Mike takes pot shots at Drake losing the 24/7 Title during his marriage consummation with his wife in a hotel room on Raw. Mike is upset that the 205 Live General Manager is not committed to his duties. Maverick retorts, saying he always wanted Mike on 205 Live because he knew of his potential.

Mike wants Drake to prove to his wife that he’s a man. But he’s not a man. A real man wouldn’t let another man say what Mike is saying right now. Mike is about to call Drake’s wife a filthy something or other, but Drake rocks Mike with a punch to the face. A dropkick sends Mike out of the ring, leaving an incensed Drake looking on.

Excellent! When was the last time we had a promo segment like that on 205 Live? Not only that, but the hint of actually having Drake Maverick wrestle has been furthered. Very interesting developments in this slow burning feud. Who says WWE doesn’t do long term booking?!

We now see highlights of the highly praised Anything Goes match between Ariya Daivari and the victor, Oney Lorcan. Although not my favorite match on the show by any means, the commentary team comment on this going down in the annals of 205 Live history. One cannot argue with more praise heaped on the show, even if it wasn’t a personal highlight.

Well, well, well. After four or five long weeks since his debut, Chad Gable finally returns. Let’s hope that, if he is a full time feature on 205 Live, he is actually featured more. Lord knows someone with his charisma, character, and wrestling acumen is more than welcome on the show. The bonus tonight is that his return will be against the man he beat in a controversial count out finish. Both men have vowed to see this match through to the end. It should be a good one!

A handshake between the two starts things off. Gable has the early advantage, but before I’ve even finished this sentence, Jack twists Gable’s arm round, affording the Gentleman the advantage. Gable now has Gallagher in a headlock. Gallagher “walkie talkies” himself out of the grasp. The back and forth grapple continues until a stalemate is reached. The pair lock eyes to the respectful cheers of the crowd.

The catch wrestling style is nearly impossible to keep up with. Gallagher almost falls victim to a deadlift German suplex, but Gallagher wriggles free, locking Gable’s wrist very tightly. Gable escapes, sliding to the outside. He comes up to the apron but is knocked off by Gallagher. The Gentleman flies out of the middle rope with a suicide dive, but it phases Gable, not a jot. The former main roster tag champion grabs Gallagher and follows through with a wide arching German suplex onto the floor.

We almost have another count out finish, but Gable brings Gallagher back in, wanting this match to finish under normal circumstances. Gable hits a powerbomb pin. Gallagher kicks out, but Gable uses the momentum to twist Gallagher round and into an ankle lock. Gallagher is in trouble, but somehow Gallagher escapes. The escapology of Gallagher is at its very best here. Gallagher gets rocked, feigns falling out of the ring, rebounds back and smashes a headbutt into Gable, the move he won his match with last week. Gable punches out of a long two count. You can almost hear the gasps in the crowd’s collective throat.

Both on their knees, and punches, palm strikes, forearms, and chops are thrown. They slowly make their way to their feet. Fatigue is setting in, but so is adrenaline. Gallagher looks for his high corner dropkick, but Gable catches him mid-air. Gable flips Gallagher over and nails him with a DDT. Another close pinfall. Gable takes to the skies, flying through the air with a beautiful moonsault. Unfortunately, Gallagher has his feet up, which crash into Gable.

Gallagher hits his high corner dropkick this time. Gallagher goes for what is an inevitable three count. Gable has enough wherewithal to get a foot onto the ropes. Gallagher is beside himself with frustration. The pair climb up the rope, Gallagher raining clubs down on Gable’s back, desperate for his belly to back suplex. He gets Gable up, but Gable reverses it into an unbelievable crossbody. Gallagher cradles his torso in agony.

Gallagher finally rights himself but is grabbed from behind by Gable, who pushes him into the corner, rolls through, and takes Gallagher out with a formidable Chaos Theory German suplex. Gallagher is beaten and trapped. The ref counts to three, and Gable is your victor.

Gable and Gallagher receive a standing ovation from the crowd and the commentary team. No doubt we will have the same levels of praise online as the Lorcan Daivari match. Gallagher looks beaten, physically and mentally, but not enough to show respect to the man who bested him.

Another fine match between these two men. They both really brought intensity and wrestling prowess to the fore. I could easily watch these two in a best of ninety-nine series over the next couple of years. Excellent stuff, and a great advert for 205 Live.

Check out the latest Ricky & Clive podcast. Ricky & Clive return from Quiz time to answer some listeners’ questions, ranging from topics such as NXT UK, the 24/7 Title, and changes to Raw and Smackdown’s format. Before that, Clive does his level best to get Ricky pumped for Extreme Rules this Sunday. We finish with an Extreme Rules/hardcore wrestling quiz, and we will also do a live draw to see who will square off in the Quiz time Invitational semifinals. Make sure to check the latest episode dropping, a review of Extreme Rules, this Wednesday!