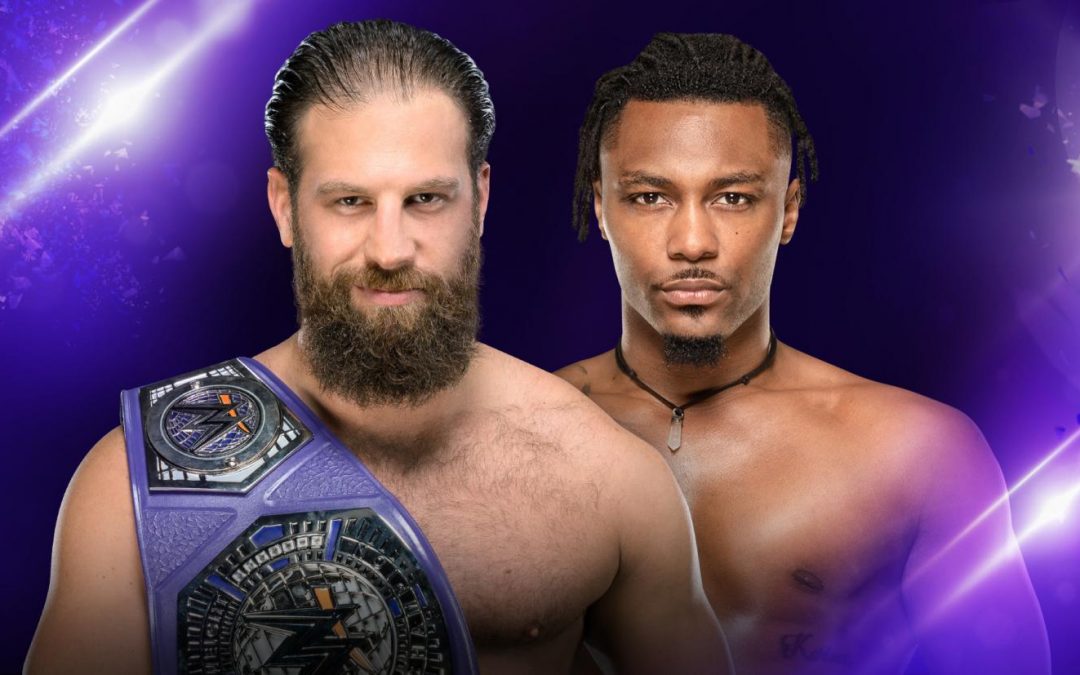 With WWE Summerslam not too far away, this week’s 205 Live sees Cruiserweight Champion Drew Gulak stay match ready in non-title action against Isaiah “Swerve” Scott from NXT’s ongoing Breakout Tournament. I’m normally fine with name changes. But the desire to refer to Scott as either his Lucha Underground moniker, Killshot, or his indie name, Shane Strickland, will be a strong one to overcome in this write-up!

Elsewhere on 205 Live this week, Raul Mendoza and Humberto Carillo revive their short-lived yet potential-laden NXT tag team to take on the Lucha House Party.

We start the show with highlights of the altercation that led to Maverick attacking Kanellis and rushing him from the ring which was, admittedly, an excellent and refreshing angle. A truly meaty story on 205 Live outside of the title scene is almost unheard of. For it to involve the General Manager actually wrestling is quite something.

Maverick addresses the camera live, accounting for his actions from last week. He doubles down on Kanellis’ title opportunity if he faces Maverick. He confirms that their fight next week will be an Unsanctioned Match. Well, well, well!

Vic Joseph and Aiden English open the show, introducing us to the first match. Nigel McGuinness is on duty in the UK Performance Centre.

I think part of the reason I never took to Humberto Carillo in the early days is that his promising NXT tag team with Raul Mendoza was scrapped in favor of Carillo’s singles push. to go one further, Mendoza had shown enough to merit his own push on 205 Live. Alas, several months later, Mendoza joins us on the purple brand for a night, in a tag team where Carillo’s strengths are accentuated.

Mendoza starts things off against Kalisto. The feeling-out process is tentative but performed as if in fast forward, so rapid and agile are both competitors involved. Hurricanranas and flamboyant arm drags are exchanged between the two. Rather than the typical show of respect after such a display, Mendoza and Kalisto butt heads to the appreciation of the crowd. The pair tag in their counterparts for round two.

The showboating continues with Carillo and Metalik. As pretty as this is, perhaps some actual offense can come in soon. Metalik hears my moans and stomps low into Carillo’s torso, felling him. Metalik employs Kalisto for a succession of quick tags as they take turns working on various body parts. Metalik slows it all down with a rear chin lock, before bringing Kalisto in to continue working on Carillo’s upper body.

Kalisto rocks Carillo with a spinning heel kick before earning a two count. Carillo is looking desperate as he whips Kalisto into his corner. He brings Mendoza into the fray with some innovative offense in the form of a wheelbarrow slam of Carillo onto Kalisto. Nicely done. An example of Carillo and Mendoza’s great chemistry together.

Carillo keeps the scrappy Kalisto at bay, his large frame keeping Kalisto at a distance. Kalisto scurries over to Metalik for the tag and they bring their own innovation to the table with a leapfrog assisted rugby tackle into Carillo. Metalik returns to grinding on Carillo’s head and neck. He then dances across adjoining ropes in the corner before nailing Carillo with a missile dropkick. Carillo fights back with a rope-assisted crossbody.

Mendoza comes into action, and the fast forward button has been pressed again. By default, his partner and opponents up their game as the action begins to break down. Mendoza is a very welcome addition to Tuesday nights so far. His energy rubs off on everyone involved. He takes a big superkick from Metalik. As he stumbles to the corner, Carillo tags himself in but ends up playing a game of cat and mouse as Metalik repeatedly outmaneuvers Carillo with a series of kick orientated offense.

Metalik climbs the turnbuckle, but Carillo follows him up. Metalik leaps off the rope and whips Carillo – balancing on the second rope – into the ring with an awfully risky hurricanrana. Mendoza senses danger and throws his body into danger, somersaulting onto Kalisto on the outside. Metalik moonsaults onto Carillo, who has his feet up.

As Metalik cradles his face on the floor, Carillo sets up for his twisting moonsault. It lands, but not exactly perfect. Nevertheless, a three-count occurs, and Carillo and Mendoza are your winners.

This, again, is a reason why I strongly feel tag team titles would be an interesting addition to 205 Live. That was a thoroughly enjoyable match to call. Mendoza was like lightning in a bottle throughout and made Carillo up his own game in the process. More matches with these two as a pair in the future would be very welcome.

The Singh Brothers are up next. They are upset that Brian Kendrick and Akira Tozawa are running around Miami with their Bollywood Oscar. They challenge the “thieves” to a tag team match on next week’s show.

Next up is a vignette hyping Isaiah Scott’s 205 Live debut, and the main event for tonight.

We then have a replay of the big moments from last week’s excellent match between Jack Gallagher and Chad Gable. We then see a Twitter screenshot of Jack Gallagher promising that people still haven’t seen anything yet, and the best is still to come. I didn’t even know such a thing was possible. Nevertheless, that is great to hear.

Something tells me this match will not last long. Even by “squash match” standards. However, surprisingly, Isner gets the first couple of shots in on Lorcan. This only infuriates Lorcan who decides to play with Isner in his own intense and frantic way.

A series of running elbows into the turnbuckle finishes with a devastating running uppercut, knocking Isner clean out of his boots. Lorcan follows up with his half and half suplex for an incredibly easy win.

Drew Gulak addresses the camera backstage, wondering who from 205 Live would dare step to him. Someone dubbed as the future of NXT will face him tonight instead. Gulak brings up that he trained Scott back in the day. Gulak has come a long way since then, and promises that Scott still has a lot to learn.

I was first introduced to Scott through his “Killshot” character on Lucha Underground. He was a fascinating character who had demons as a result of his time in war and wore a mask to hide from his past. He is now stripped of that mask and identity, so I’m unsure of what his future holds. Regardless, Scott showed me he was a competent and dynamic wrestler. I expect him to hold his own tonight.

Gulak starts the match with a shotgun dropkick in what has become a trademark of the Cruiserweight Champion. An explosive way to tell your opponent who’s boss. It may be a small thing in the grand scheme of things, but it has become one of my favourite aspects of this new, more ruthless Philadelphia Stretcher.

Scott works well in evading Gulak’s attempts to lock in holds, following up with more offensive dropkicks, spilling Gulak from the ring. Scott now almost embarrasses Gulak as he plays the big moves in Gulak’s game of aggressive chess. Scott is checking off all the boxes so far. He looks completely unphased and at home in the ring against such an accomplished wrestler.

He may not have advanced in the NXT Breakout Tournament, but he shows no signs of inexperience in this match. He seemingly has an answer for everything Gulak has to offer. Scott is on top.

Gulak becomes enraged though, beginning to work on Scott’s right hand. Scott favors his hand on the outside, but Gulak follows like a shark sensing blood. He throws Scott into the fan barrier before splaying his body on the commentary table, opening him up for a huge chest chop. Gulak hoists Scott up for possibly a Razor’s Edge powerbomb and varies it with smashing Scott into the ring post.

Back in the ring, and Gulak works on Scott’s now vulnerable back with a single leg Boston crab. Two of Scott’s body parts now have targets on them, as far as Gulak is concerned. Scott fails to mount a comeback as Gulak leaps off the second rope with an aggressive clothesline. Gulak now keeps Scott grounded by working on the left shoulder.

Scott has to fight out of it, but with his injured right hand. This doesn’t bode well for him. Gulak is wearing Scott down literally piece by piece. Gulak goes for another Razor’s Edge, but Scott flips through. He grabs Gulak close and drops to his knees, delivering a jawbreaker to Gulak in the process. Now it is Scott’s time to come off the middle rope, this time with a spinning elbow.

Gulak shrugs off the attack and begins climbing the turnbuckle. Scott, however, leaps up and somehow hurricanranas Gulak onto the mat. He then plants a mule kick into the back of Gulak’s head. Gulak looks rocked. Scott looks to lock in a submission, but Gulak wrenches Scott’s right hand the wrong way. Scott immediately looses Gulak, who applies his Gulock finish.

Scott wriggles his feet under the ropes. This escape gives Scott a new lease of life. He works on Gulak with a fury and drive that has the crowd eating out of the palm of his hand. To the point that a top rope jumping stomp onto Gulak earns him a long two count. That Gulak kicks out shocks the fans.

Gulak is worried. He doesn’t know what to do. Scott drops Gulak with a tilt-a-whirl slam, then wrenches Gulak’s fingers back, repaying the favor from earlier. Things are looking very promising for Scott, but that fact alone seems to bring Gulak out of his stupor. The champion counters more Scott offense with a trapped leg back suplex. It isn’t long before Gulak hoists Scott onto his shoulders, and levels him with his Cyclone Clash finisher for the win.

Drew Gulak may have won this match, but Scott won an instant reaction from the crowd and 205 Live viewers at home who may not have heard of him before tonight. A truly excellent “debut” on the purple brand. This was a war.

Check out the latest Ricky & Clive podcast. Ricky & Clive sit down to talk about this past Sunday’s Extreme Rules PPV with Rance Morris from the Outsider’s Edge podcast, with a mid-show run-in from Rab Ropes. Extreme Rules was a pretty solid show from top to bottom, so there’s plenty to gush over in this episode. They then look at an eventful couple of nights on WWE TV, with Bray Wyatt making his official return to arena business and the Smackdown Town Hall segment. We finish with a wrestling acronym quiz.