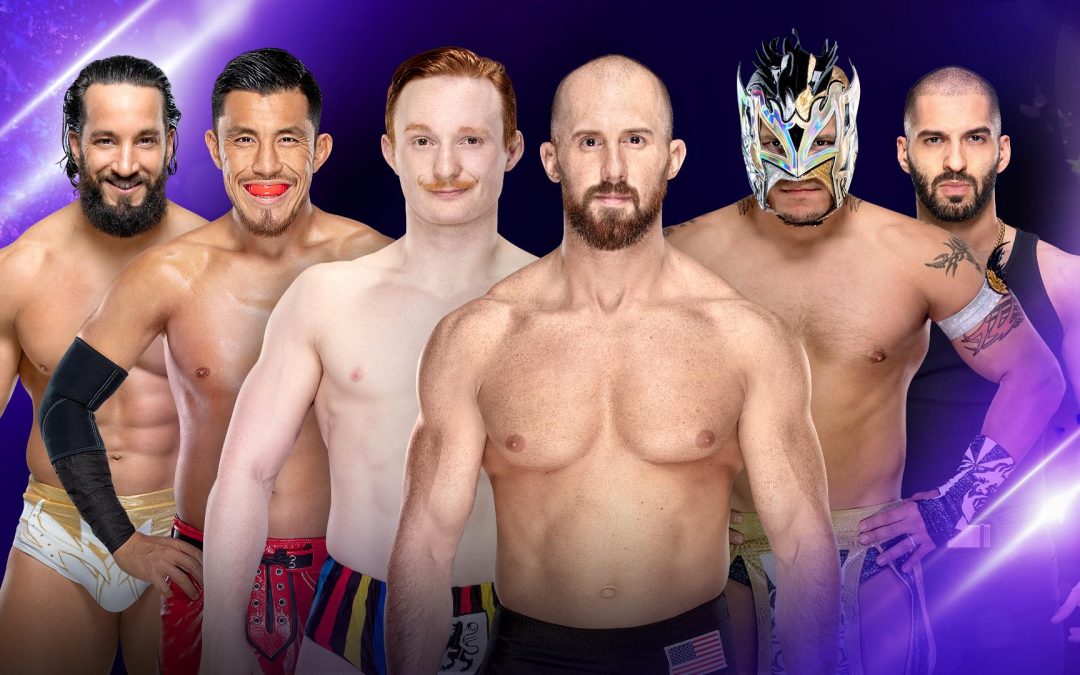 While other characters on 205 Live have stories ongoing and enemies to target, that has not been the case for current Cruiserweight Champion, Drew Gulak. With one episode of the show to go, we finally find out who will step to Gulak this Sunday at Summerslam. The challenger will come by way of the victor in tonight’s Six-Pack Challenge match. Tony Nese, Akira Tozawa, Jack Gallagher, Kalisto, Oney Lorcan, and Ariya Daivari will battle it out to see who faces Gulak.

Elsewhere on the show, Humberto Carillo looks to prove his luchador credentials against Lince Dorado, who has recently questioned Carillo’s quick rise through the ranks at the expense of other stars similar in wrestling style on 205 Live.

I won’t hide my satisfaction that Humberto Carillo’s climb to the top is now a slow burner. Not even among the six men contending for the title later on in the show, Carillo has to prove his worth as a luchador first, with Dorado as the testing ground.

The pair lock up to start, and Carillo cartwheels out of an early wrist lock from Dorado. More twists and turns and Carillo reverses the pressure with a wristlock of his own. A stalemate is reached, and they circle the ring to compose themselves.

Dorado speeds things up with a tilt-a-whirl hurricanrana, then a springboard arm drag. Carillo isn’t phased, leveling Dorado with a dropkick. They both block a high boot simultaneously, and once again they take stock in this identically wrestled match so far.

With Carillo spilling to the outside, Dorado takes to the skies with a crossbody out onto his opponent. Throwing Carillo back in under the ropes, Dorado hits a falling splash from the top rope. He slows things down with a headlock, his knee stuck tight into Carillo’s back. Carillo attempts to reverse the hold, but Dorado doubles down, wrenching his arms back behind him and putting extra pressure on the back.

Carillo eventually breaks free, hits the ropes and counters a frankensteiner into a pin attempt. Back on their feet, and Dorado lashes Carillo’s chest with a stinging chop. Carillo retaliates with a hard strike. Counter after counter and both men fall to the mat.

Carillo gains the upper hand with a low dropkick to Dorado sitting on the mat. He follows up with a series of backflips into a moonsault. Carillo goes too far, however, barely landing on Dorado, but goes for the cover nevertheless. Dorado kicks out and eventually fends off Carillo enough to dive off the top rope for another crossbody.

A series of elbows and Dorado looks for a springboard stunner. Carillo catches him and hoists him up onto his shoulders. Dorado puts all the weight on Carillo, turning the move into Carillo on Dorado’s shoulders. Dorado jerks him, planting Carillo face-first into his knees. Impressive strength from Dorado here.

Dorado stands atop the turnbuckle, waiting for Carillo to get to his feet. He does so, but with his head through the ropes. Dorado follows up with a leg drop onto Carillo’s neck on the apron. He looks to follow up with a top rope splash back in the ring, but Carillo moves out of the way. Another high strike, and another pinfall attempt by Carillo.

Carillo drags Dorado to the opposite corner from where the attack took place. This proves costly, as Dorado has time to compose himself. They both gingerly climb the turnbuckle, exchanging chops. Dorado looks like he’s going to superplex Carillo to the outside! Carillo senses the danger, spilling Dorado onto the rope. Carillo hits a huge missile dropkick as Dorado crashes to the outside. He then runs the ropes and hits Dorado on the outside with a Fosbury flop.

Both men are struggling to reach their feet on the outside during the ten count. Carillo is on the apron at the count of nine when Dorado sweeps his feet out from underneath him. The ref counts to ten, and the match is a no contest.

A wee bit of edge from Dorado here, as he resorts to dirty tactics to ensure Carillo doesn’t win. Carillo is frustrated, taking to the skies again and wiping out both Dorado and Gran Metalik on the outside. No doubt this series will continue. A decent match, which I’m sure will end in some stipulation or another.

Tony Nese is up next, lamenting how things haven’t gone his way recently with regards to the Cruiserweight Championship. Tonight is the perfect opportunity for Nese. When he wins tonight’s six-pack challenge, it will be him versus Gulak one more time. If he doesn’t win, he doesn’t know where he stands in 205 Live. Quite the mindset for Nese to have!

We have replays of the controversial finish to the match from earlier. Dorado is approached by Ariya Daivari backstage. Daivari says people should be talking about Dorado rather than Carillo. He could be the breakout star of Lucha House Party, comparing Lince to Seth Rollins in the Shield……anyway….. Dorado affirms his loyalty with LHP. Daivari says Dorado should start getting what he deserves. Metalik comes up and squares up with Daivari, who walks away with a smirk on his face.

Never would I have thought to see the day that there would be dissension within the Lucha House Party ranks. For a team who have done nothing to progress themselves in well over a year now, this might be the most interesting story they’ve ever been involved in!

As each wrestler makes their way to the ring, the entrances are accompanied by Twitter videos of them all staking their claim to become the number one contender. A nice use of time here.

All six circle each other, but Daivari isn’t interested, taking to the outside to watch the chaos. Tozawa ensures Daivari’s involvement in the match with a suicide dive headbutt. He throws Daivari back into the ring, the rest of the wrestlers taking turns to strike him.

Daivari fights off an incoming Gallagher. He vaults off the top rope and splashes into…nothing….as the remaining five easily sidestep the approach. Poor Daivari. At least the crowd is entertained by his misfortunes.

As usual with these multi-man matches on 205 Live, especially as of late, these “organized chaos” matches are almost impossible to call. As you would expect, once the Daivari comedy splash is out of the way, the action breaks down as each man looks to gain the upper hand. An impossible situation, really.

Also, as you would once again expect with these matches, the wrestlers pile up on the outside, each wrestler somersaulting, splashing or, in Gallagher’s case, Mary Poppinsing onto the array of bodies. Kalisto is the last to try the move, but everyone else catches him. They lift him up with ease, splashing him onto the commentary table with quite the awkward landing.

Daivari and Lorcan are the only two in the ring, renewing their rivalry from last month. Gallagher interjects, tying up Lorcan as only he does best. With an Indian deathlock applied, Tozawa spins round Gallagher to apply the Octopus stretch. All the while, Tony Nese locks another submission onto Lorcan’s neck. Daivari, ever the party pooper, breaks up the triple submission to the disappointment of the crowd.

Tony Nese seems to have the best of it at the moment, powerbombing Tozawa onto Lorcan who Nese had just bettered with a hanging piledriver of sorts. Gallagher spots the rise in momentum of Nese and decides to level him with a massive headbutt. He takes Nese up the turnbuckle in an effort to land a back suplex, but Nese fights him off. He then deals with Lorcan and Kalisto in a similar fashion, Nese’s legs seemingly superglued to the turnbuckle. This image is further enhanced as he German suplexes Gallagher (who simultaneously superplexes Kalisto) onto the mat.

Tozawa unsticks Nese from the ropes with a rolling senton. Daivari follows up with a splash that finally lands, but the ref only counts to two. Lorcan slithers back into the ring, the freshest of everyone. He looks for a half and half suplex onto Daivari, but Daivari counters with his version of the rainmaker clothesline.

The action breaks down once again, everyone hitting signature finishes. Nese rocks Gallagher with a Running Nese and looks to be winning the match. Up pops Lorcan, however, hitting the half and half suplex. With nobody left to break up the pinfall, Lorcan has all the time in the world to get a three count on Nese. Lorcan is going to Summerslam!

Lorcan has his hand raised as Gulak’s music plays. He stands in the aisle and hoists his Cruiserweight Championship high above his head, as 205 Live goes off the air.

Unlike previous melees, this had more comedy spots than it did excellent choreography and well-worked sequences. That aside, Lorcan emerges victorious. I have been hard on Lorcan when watching 205 Live these past few months, but he has definitely come into his own. It is also a fresh face for Gulak. We’ve seen everybody else in this six-pack challenge involved in championship matches in some form or another, so this matchup is more than welcome. It would have been nice if Chad Gable was at least in contention, though…..

Check out the latest Ricky & Clive podcast! Clive takes the reins this week as Ricky is off doing Ricky things. This week, I do a preview of the NXT TAKEOVER: Toronto II card so far, and general overview of our brand of the moment: NXT UK. Before that, I talk about the mammoth 2 night ICW Weekender PPV: Shug’s Hoose Party 6, as well as the news of ICW’s pending move to the WWE Network. Our Summerslam preview podcast will drop later on Wednesday evening.