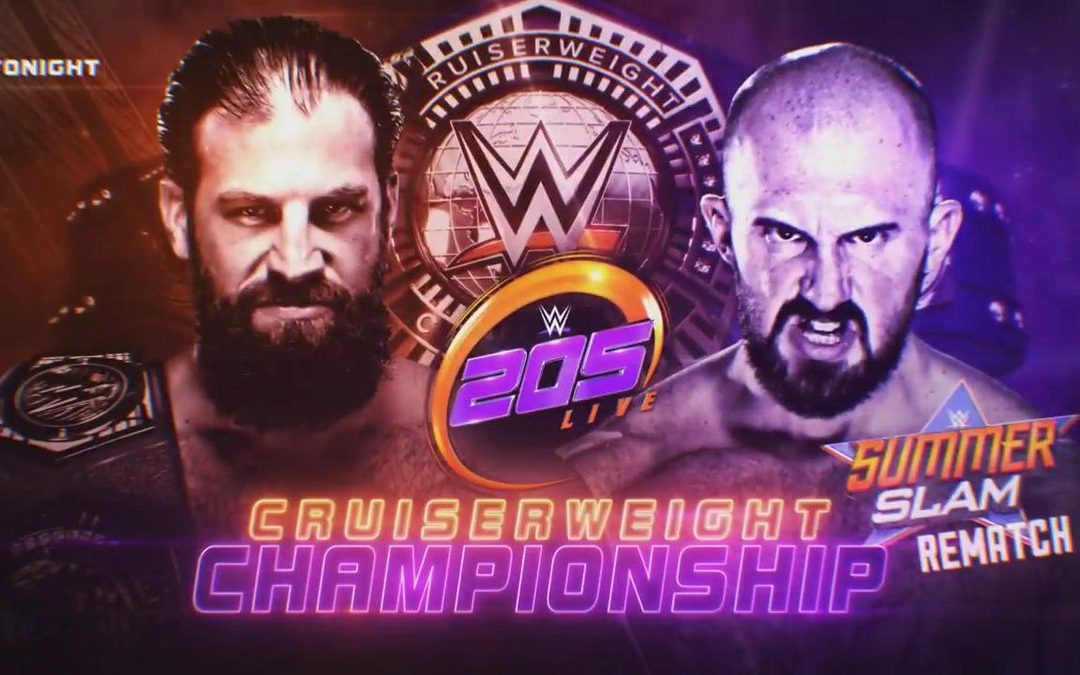 Drew Gulak may have retained the WWE Cruiserweight Championship via ever so slightly underhanded tactics against his opponent at this past Sunday’s Summerslam, but that hasn’t stopped Oney Lorcan from becoming the wrestling Twitter champion regardless. His UPPERCASE TIRADE aimed towards Gulak over the weekend was a joy to behold. Based on bizarreness alone, here’s to more Oney Lorcan in the 205 Live spotlight going forward!

With the chop to Lorcan’s throat from Sunday in mind, Lorcan’s wish for a rematch with Gulak has already been granted. Tonight’s main event will be Drew Gulak vs Oney Lorcan for the Cruiserweight Title. If we are following the trend from the 205 Live after Wrestlemania rematch between Buddy Murphy and Tony Nese, then this match should be a cracker!

Jack Gallagher proffers a gentlemanly handshake once the bell rings, which Tozawa happily accepts. The pleasantries last as long as the handshake, however, as Tozawa grounds Gallagher with a head scissor submission. Gallagher “Houdinis” himself out of the hold, applying a submission of his own in the form of a wrenching back of the right hand.

Gallagher runs the ropes, followed by Tozawa. The former champion spins up and round Gallagher’s frame, applying the octopus stretch. Gallagher powers out, but Tozawa replies with a stiff left to Gallagher’s jaw. Tozawa approaches the prone Gallagher, who catapults his legs directly into Tozawa’s chest. The momentum sees Tozawa spill over the top rope, spilling nastily to the floor on the outside. Tozawa makes the ten count with half a second to spare.

The match, unfortunately, comes to a halt. Tozawa seems to have started bleeding upon impact of his forehead with the steel steps. While the referee tends to Tozawa, Gallagher engages the crowd in support of Tozawa. A nice touch from the Gentleman.

You know what they say regarding tasting one’s own blood. The injury has resulted in Tozawa going into third gear, pulling out his trademark moves to gain the upper hand on Gallagher. A suicide dive headbutt on the outside and missile dropkick back in the ring earns him a two count.

Gallagher looks to elbow his way off Tozawa’s shoulders, but Tozawa powers through and fells Gallagher with a fireman’s faceplant. Back on his feet, and Gallagher fends off Tozawa scurrying in between his legs, shoving him into the ropes and following up with a high dropkick in the center. Gallagher takes Tozawa to the top rope with a superplex in mind.

Tozawa reverses the superplex, Gallagher splashing onto the mat. Tozawa lands his top rope senton and covers Gallagher for the victory.

What has been missed by the referee, however, is Gallagher’s foot on the rope during the three count. Kendrick was “innocently” pumping his fists in the air as the pinfall attempt took place, his flailing arm knocking Gallagher’s foot back off the rope in the process. This isn’t the first time Gallagher has fallen victim to a controversial loss on 205 Live, considering his match with Chad Gable a couple of months ago. This all seemed rather innocent, but one could understand how hard done by Gallagher would feel in all of this. Expect this story of unfair decisions at the expense of Gallagher to continue!

Oney Lorcan is up next, bemoaning his loss to Gulak on Sunday. Drew took the easy road to victory with a punch to Lorcan’s throat. Lorcan wants to right this wrong and vows to leave Toronto as the Cruiserweight Championship.

This match was originally a 6 man tag between the OG Lucha House Party and the aforementioned opponents. Video footage from earlier in the day shows Gran Metalik laying on the floor, Dorado, Kalisto, Carillo, and 205 Live General Manager Drake Maverick coming to his aid. Maverick decides there and then that Carillo will replace Metalik in tonight’s match. With Daivari looking to destroy Lucha House Party from within, all my money is on him being the culprit. Between this and the Roman Reigns story, we have two “whodunnits”  on the go at the same time. God bless WWE!

Daivari and Carillo kick off the match, Carillo showcasing his agility with ease. A message to Lince Dorado perhaps, who has questioned Carillo’s luchador credentials. Now Lince Dorado is tagged in, showing off his own skills as he takes it to Sunil. Dorado and Kalisto swap frequent tags, despite looking to Carillo at first. Carillo, obviously perplexed with not being considered in the easy taking apart of their opponents, tags himself into the match, but not for long before being tagged back out.

A cheapshot by Sunil sees Kalisto grounded. LHP and their partner for the night are not seeing eye to eye, instead looking to vie for the spotlight. Ariya Daivari brings the match down to his own pace as he wears Kalisto down with a series of debilitating holds and slams. He brings Samir into the match who keeps Kalisto in his team’s corner.

Kalisto is in danger, having no other choice but to tag in Carillo. Carillo takes it to Sunil with an inverted rolling thunder, but Ariya Daivari brings the count to a halt. The action breaks down quickly. Carillo and Dorado take to the skies, crashing into the Singhs on the outside. Daivari escapes just in time, deciding he has had enough for the match and makes his way back to the stage.

Back in the ring, and Carillo hits his twisting splash off the top rope onto Sunil, but is tagged by Dorado in the process. Carillo goes for the cover but has to move out of the way very quickly, so as to avoid Dorado’s shooting star press onto Sunil. Dorado’s finisher is what wins the match for the thrown together outfit.

That was quite the innovative finish to a match, I have to say. The edge that Dorado has shown of late is unquestionably the most interesting thing to ever happen to the Lucha House Party. It’s also arguably the most interesting story for Carillo to sink his teeth into. Dorado is clearly proud of his lucha heritage and is not happy with Carillo flaunting his own style to get him higher up the ladder. Give me more of this, please!

Drew Gulak is up next. He holds the Cruiserweight Title up with reverence. He gifts us with another philosophically tinged message, stating 205 Live is his battleground and that he is the law. Gulak is slowly putting a stranglehold on all of the Cruiserweight division, and there is nothing that is stopping him in this mindset. It’s going to take something or someone over and above to knock Gulak from his perch, whenever and if ever that does occur.

Tony Nese is backstage now, lamenting his loss of opportunity in last week’s 6 pack challenge. Nese needs to start from scratch, but he will learn from his mistakes. He has to learn from his past to ever have a chance of winning back the Cruiserweight championship.

Oney Lorcan heads to the ring first, looking for revenge. I enjoy his orange and purple attire, an homage to 205 Live for the opportunity it has given him to help expand upon his WWE career. A nice touch.

Lorcan ensures Gulak doesn’t get in his shotgun dropkick at the start of the match. He leaps towards Gulak, all limbs flailing, catching Gulak off guard. Lorcan’s anger has Gulak pacing in consideration around the ring. Gulak eventually makes his way into the ring, but Lorcan immediately nails him with a half and half suplex.

The momentum slides Gulak out of the ring, luckily for him, but Lorcan climbs the ropes and somersaults directly onto Gulak on the outside. He drags Gulak back in and looks to half and half Gulak from the top rope. A back elbow from Gulak sends Lorcan sprawling to the outside. Gulak is a lucky lucky man.

Gulak throws Lorcan throat first into the commentary table. Still tender from Summerslam, Gulak is focused on injuring the throat further. Lorcan is in a bad way on the outside, Gulak calmly watching the referee count to nine before Lorcan slithers back in the ring. Gulak wastes no time whatsoever. A high stomp. A launch into the turnbuckle. A snap suplex. Gulak’s nasty attitude is an overbearing strategy that has seen him become the champion he is today. Focusing more on his own performance, rather than that of his high flying peers, has given us a truly dangerous wrestler.

Lorcan’s throat remains a target for Gulak as he twists and torques on it underneath the bottom rope. Gulak is softening up the surrounding area with a rear chin lock, readying Lorcan for the Gulock. The champion takes to the top rope and whips down with a clubbing clothesline, its high trajectory adding a real sense of impact to the move.

Lorcan is locked in another chin lock, seemingly fading. He powers out of the hold, however, with elbows to Gulak’s gut and following up with his trademark uppercuts and blockbusters. It’s as if Lorcan is replenishing energy before our very eyes as a series of charging strikes fell Gulak over and over. Lorcan charges Gulak in the corner twice, but Gulak catches him on the third charge, powerslamming his hamstrings into the ropes. This is an exhausting match to watch.

Another charging clothesline attempt by Lorcan, but Gulak answers with a lariat of his own, turning Lorcan inside out in the process. A pin attempt follows, but Lorcan has enough resolve left in him. Gulak hoists Lorcan onto the top rope. He follows him up, raining punches down on Lorcan’s head. Lorcan slides down through Gulak’s legs, Gulak’s face crashing into the post.

Lorcan climbs back up. After some tentative grasping, he hits the avalanche half and half! Lorcan goes for the cover, but the reach of the suplex is so far, Gulak manages to drape his foot onto the bottom rope. Devastatingly for Lorcan, the referee spots the save. Gulak heads to the outside, a wry smile on his face. But Lorcan follows after him, a man possessed. He crashes Lorcan around the commentary area before throwing Gulak back in. Gulak plays possum, rolling Lorcan up for a small package pin, but Lorcan kicks out.

Lorcan grabs Gulak by the beard, smashing open palms into Gulak’s face. Suddenly, a tangle ensues between the two, allowing Gulak the chance to apply the Gulock. Lorcan struggles to break free, but Gulak has this locked in extremely tight. Lorcan is nowhere near any rope, and the struggle sees Lorcan basically pass out. The referee, looking out for Lorcan’s safety, rings the bell.

This was a tough encounter. To quote NXT UK’s Joe Coffey, this was a gritty, not pretty affair. A very evenly matched pairing, but Gulak ends the series with two wins in a row over Gulak.

All in all, this was a pretty decent 205 Live. The main reason for that, however, is this very intriguing angle between Dorado and Carillo. This has my attention the most out of what is going on, and I am here for the downfall of Lucha House Party!

Check out the latest Ricky & Clive podcast! Ricky returns to the show alongside regular guest, Rance Morris of Outsiders Edge, to look back at an incredibly busy and newsworthy few days for WWE. NXT Takeover: Toronto and Summerslam are looked at in depth, while Raw and Smackdown had lots to write home about in the form of returns from both Sasha Banks’ and King of The Ring, and the biggest matchup in the history of our sport: Buddy Murphy vs Roman Reigns! We finish with a King of The Ring quiz.