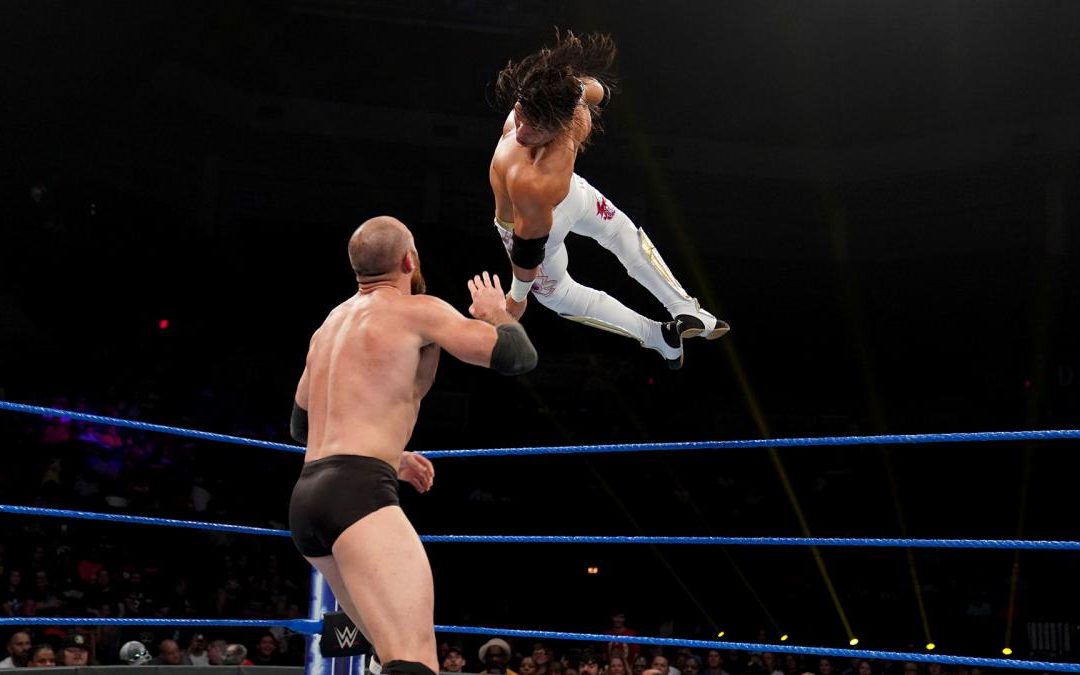 After last week’s wild one-match episode of 205 Live, anything that follows in subsequent offerings is bound to pale in comparison. Putting match stakes and quality aside, many of the ten-man tag combatants will still be licking their wounds after a fiery encounter, especially those on Team Gulak’s  losing side.

That hasn’t stopped Ariya Daivari’s wide reaching and nefarious influence across the Cruiserweight show from having ramifications that see him in action tonight, so incessant is his need to stick his nose in business that simply doesn’t concern him. I was down on Daivari’s contribution to 205 Live as a whole as recently as a few months ago. Now, however, is a different story, for Daivari is the linchpin in possibly the only genuinely decent angle involving everyone’s favourite non-entities, the Lucha House Party.

Lince Dorado isn’t sitting back and letting Daivari do all the leg work, though. His “luch-ier than thou”, in your face attitude has breathed a lease of life into the stable, whether it be a brash show of pride as it pertains to Humberto Carillo’s credentials as a Hispanic star, or standing up for his attacked brothers in the form of Daivari, fingered as the perpetrator of a backstage assault of Gran Metalik to weeks ago.

205 Live veteran Kalisto will fight for his stablemates’ honour, in attempt to beat the confession out of Daivari. With Dorado’s actions of late, something tells me this won’t be a simple reveal, if at all.

As the match gets underway, Daivari seems unphased by the threat Kalisto poses, choosing instead to taunt Kalisto with lazy posturing in the early offerings. Despite some aerial and brawl infused retaliation from Kalisto, Daivari asserts his dominance.

Legs swept from the apron. Back launched all the way over onto the barricade after a basement dropkick. Kalisto’s smaller frame allows the bumps he takes to look that bit more damaging, in turn making Daivari look more of a force.

Kalisto’s back and ribs become the focus of Daivari’s attention, working on the luchador’s core in an attempt to negate the foundation of his high flying offense. Again, a spirited comeback from Kalisto comes to nothing as Daivari has an answer for all Kalisto throws at him, so stifling is his offense. Chinlocks, peppered with an impressive spinebuster in between, wears Kalisto gradually down.

As you would expect, a trope as old as time in pro wrestling sees Kalisto finally overcome the slow and concise adversity that Daivari has offered so far. Kalisto’s “attack points” almost max out to the point a Solido del Sol is on the table. The wily Daivari staves off the potential match finisher, however, staggering his way through the ropes to the apron, but Kalisto keeps momentum on his side with an impressive hurricanrana from the apron onto the floor.

Kalisto drags Daivari into position for a successfully landed 450 splash and pin, but the hook of Daivari’s legs is actually too good, for the legs rest on the ropes, breaking up the three count. Kalisto looks for his Solido del Sol once again, but Daivari’s disrespect of all things Lucha House Party continues as he rips Kalisto’s mask almost clean off his head. The panic Kalisto suffers is enough for him to fall victim to Daivari’s Rainmaker-esque lariat, earning him the three count over Kalisto.

Lince Dorado and Gran Metalik rush the ring after the match to thwart off any further attack from Daivari. Instead of engaging in a skirmish, however, Dorado simply stares Daivari down. No words are said, no punches are thrown.

Daivari’s behaviour is as clear as day to decipher. Dorado’s however, is a different issue entirely. Just whose side is Dorado on? Is he truly fighting the good fight for Lucha House Party? Or is he, too, looking to destroy the stable from within, using Daivari as a conduit in the process? The plot thickens in this mid-card intrigue angle.

What almost fell under the radar from last week was how things turned out at the end of the ten-man tag. First of all, a correction on my part from last week. Through some unexplained lapse of reality, I had reported Lorcan’s elimination from the match. This was simply not the case. Lorcan was simply hiding in the wings as Carillo took centre stage in the win for his team.

Both Carillo and Lorcan were still standing come the referee’s signal to ring the bell in favour of Team Lorcan. What that means is Lorcan and Carillo did enough to stake a claim to challenge Drew Gulak for the Cruiserweight Championship. In typical 205 Live fashion, General Manager Drake Maverick has seen fit to sanction a number one contender match between the two that will main event tonight’s episode. The winner will face Drew Gulak at WWE Clash of Champions.

Despite Lorcan coming into his own on 205 Live of late, he isn’t the clear favourite in this match. I was shocked to hear the commentary team advise, upon the match’s start, that Carillo has not suffered the fate of a successful pinfall in five whole months. All of a sudden, the credibility of both men makes the outcome of this match a lot more difficult to call early on. Of course, if you have been paying attention over the last month or so, Carillo’s multi-episode vignette treatment would tell you that a push to the dizzy heights of the Cruiserweight Championship scene is in the works for him.

Whether aware of the stars aligning for Carillo or not, Lorcan does his level best to ensure that alignment doesn’t happen. His smashmouth style, merged with grounding submission holds, slows down Carillo’s normally speedy offense. Taking into account the tactic employed by Daivari earlier on, an overarching theme of 205 Live this week is that of destabalising the high flier in the match.

Lorcan isn’t exactly a stationary, aesthetically dull wrestler. But if Carillo is allowed to take to the skies, where he is at his most comfortable, Lorcan faces the possibility of last month’s title match at Summerslam being a flash in the pan, rather than a constant and consistent chipping away at the so far untarnished marble of Gulak’s championship rein.

Carillo does indeed have a considerable spell on top with his aerial moveset, all the while incorporating that brawl mentality that is also a prominent feature on 205 Live. A mentality he has learned in a baptism by fire manner, as he has faced off against a wide variety of Cruiserweight styles over the course of 2019.

That style comes to the fore in the rare use of a powerbomb by Carillo. Up until now, Lorcan has seemingly soaked up and, more importantly, adapted to Carillo’s high flying wrestling style. But a powerbomb is a powerbomb, sure to stop anyone in their tracks.

Lorcan seemingly soaks up this offense too,  however, as it is he who enacts the most damage following the powerbomb. A half and half suplex on the outside. A somersault from the top rope to Carillo down on the floor. Lorcan has entered that mode that sees him throw everything he has at his opponent, his own well being be damned in the process.

Lorcan looks to inflict the most damage yet with a half and half suplex attempt off the top rope. Carillo fights Lorcan off, but receives a running uppercut to the back for his troubles. Lorcan mounts the turnbuckle once again, a suplerplex in mind. But again, Carillo has the frame and wherewithal to send Lorcan crashing to the mat.

Lorcan is in the “dropzone” (thanks, Michael Cole), and Carillo wastes no time to jump and twist into the air, landing all of his weight onto Lorcan. Carillo covers Lorcan for the win and becomes the new Cruiserweight Championship number one contender.

After the match, Drew Gulak appears on screen, congratulating his former student on his victory. Gulak says that what he has been saying all along is true: change is the rule. Gulak has evolved, and so has Carillo. But Gulak still has another lesson to teach Carillo: pain and punishment. If change is the rule, then Gulak is the law.

While I am no huge fan of Carillo in general, I have to take my hat off to 205 Live and this long term booking that has played in the background for this one. Gulak may claim to respect Carillo enough to have taken him under his wing in the past. But Carillo has evolved quicker in his short time on 205 Live compared to Gulak. And that intimidates Gulak. That scares him.

What scares me, however,  is Gulak’s current mentality is the most unwavering it has ever been. Carillo has to soak up more pain and punishment in one match than he has done in his whole time on 205 Live if he has any chance of becoming the Cruiserweight Champion.

In the downtime of this week’s 205 Live, we have two backstage segments. First, Tony Nese is asked for comment after his decision to team with his recent enemies in last week’s match. Nese admits he would do anything to win back his Cruiserweight Championship.

It just so happens that he has to think outside the box to do just that. If that means having to be something other than the Premier Athlete, then so be it. Nese’s minor crisis of confidence has seen him quickly go down a dark path that may lead to an eventual heel turn.

Elsewhere, The Singh Brothers, dressed to the gills and sitting in directors’ chairs, lament their performances of late. One could say they have not been…Boscar worthy (thank you, I’m here all week). The Singhs have vowed to go inside the Bollywood Actors Studio to study their performance, to go back into the archives, and return as the greatest tag team. I must admit that I will not shed a tear in frustrated anticipation of their return. If it does mean a shift in mentality then, please, take all the time you need to put in an overall performance that is worthy of my attention, never mind awards.

All in all, as expected, this was a much more subdued affair in comparison to last week’s episode. But the furniture has to be re-erected. The foundations have to be laid once again. In doing  that this week, 205 Live sets itself up for a Fall season rich with stories up and down the card, and good stories at that. Despite the rumours of 205 Live ceasing to exist growing arms and legs, it looks like the Cruiserweights will continue on unaffected. And, if it comes to it, will go down fighting.

Check out the latest Ricky & Clive podcast! Ricky and Clive are joined this week by Darren Kirkby and Paul Tolley of “Badlands Podcast” to discuss the huge news that NXT is moving to USA Network on September 18th for a weekly, two hour show. We look at the positives and negatives of the move, as well as what this could mean for WWE and its Network going forward. We finish with an NXT & NXT UK quiz.