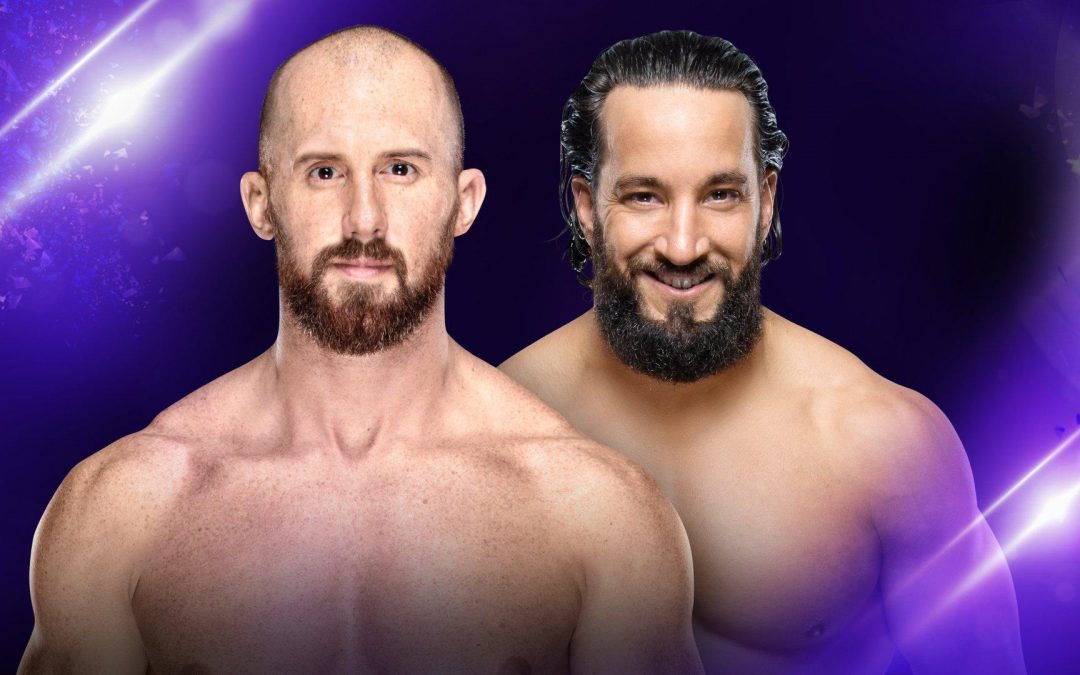 Earlier on in the day, WWE.com posted a video of Lince Dorado apologising to his Lucha House Party stablemates for his actions of late on 205 Live. For his pride getting the better of him; his erratic behaviour as it pertains to his partial affliation with Ariya Diaivari. His pleas for peace seem genuine, and both Kalisto and Gran Metalik are accepting of his apology, but Kalisto seemed hesitant. Time will tell if the harmony within Lucha House Party remains as it currently is.

Dorado’s match against Daivari tonight is probably the best way to test that loyalty. Daivari continues to trash-talk Dorado in the beginning, claiming Dorado should have done things the way he told him to, and he would have been champion at the end of Clash of Champions.

As is in keeping with the form of Dorado of late, he comes out the gate with a heightened intensity in this opening match. But no doubt this will be a reaction to that test of his loyalty at the hands of Daivari. His chance to enact revenge on Daivari is impassioned, taking to the skies early doors to inflict as much damage as possible. Daivari has other ideas, however, sweeping Dorado’s legs out from underneath him mid springboard attempt. Daivari’s modus operandi of stifling his opponent with hard impact DDTs and subsequent chin locks begins to take hold.

Daivari even takes time to mock the crowd, soaking in all the disdain and even apathy thrown his way. Dorado attempts to fight out of the hold with a roll up pin attempt, then a counter handstand springboard enziguri. He does well to pick up momentum, laying in strike after strike in an athletic fashion that has looked seamless in recent months. Again, though, Daivari uses the top ropes as a silent tag partner, knocking into them and spilling Dorado from the top turnbuckle as he is looking for a shooting star press.

Dorado doesn’t allow the comeback to take hold, staving off a charging Daivari with a superkick, then a series of turnbuckle ascending moonsaults. Daivari scurries out from a potential final top rope moonsault, though, and hits a high urinagi. Dorado has no intentions of staying down, kicking out of big moves, countering other hard offense with a crucifix pin attempt. But no matter his own offense,  Dorado struggles to topple Daivari, who always seems to have an answer for whatever is thrown his way.

After a tentative exchange of strikes on the top rope, Daivari finally spills to the floor, leaving Dorado alone up top. In the second attempt of the match, Dorado hits the shooting star press and covers Daivari for the three count. For now, Dorado seems to have exorcised his demons, and all is well in the Lucha House Party camp. I would be lying, however, if I was happy with this outcome. Without trying to sound like an entitled fan, I simply demand further unrest within the stable and for Dorado to shine as a result!

Jack Gallagher is in a good mood of late after finally getting one over on his current adversaries, Akira Tozawa and Brian Kendrick. Even taking to shaking children’s hands in a gentlemanly manner on his way to the ring, the Englishman is clearly in a happy place for the middle match of the night.

With Kendrick claiming in a pre-taped video that Gallagher’s lies and claims of cheating will come back to haunt him, Kendrick looks to bring respect out of Gallagher, something he feels his opponent is lacking.

Kendrick is the one who has to show respect at first. In fact, he has no choice. Gallagher’s very old school catch wrestling style is on full display. His tying up of Kendrick, taunting of him with elaborate blocks, is done with an almost nonchalance.

Kendrick retaliates with a hard kick to Gallagher, spilling him to the outside and into Tozawa. The scramble sees Gallagher and Tozawa exchange words. That easy going outlook has all but disappeared from Gallagher as he is simply not happy with Tozawa being out at ringside.

The distraction is enough for Kendrick to sneak up from behind with a kendo stick. Kendrick slams it down onto Gallagher’s back. The referee sees it all and has no qualms about ringing the bell for a disqualification in favour of Gallagher. But Kendrick doesn’t stop there.  He wails on Gallagher over and over again with the kendo stick. So much so, that Tozawa comes to Gallagher’s aid, clearly not happy with his partner’s mistreatment.

Kendrick takes out more of his frustrations on long term friend, Tozawa. The kendo stick is dancing in fury as it lands on both men repeatedly till Kendrick eventually has his fill. All this time we thought it was Gallagher who was obsessed with gaining respect from this feud, but it has been Kendrick all along who has let this get the better of him. To the point that he has probably lost a friend in the process.

Another successful Cruiserweight Championship defense in the books for Drew Gulak. At Clash of Champions, he was at a numbers disadvantage, with Humberto Carillo and Lince Dorado both showing a great hunger to finally strip Gulak of the title. But as tonight’s 205 Live comes around, Gulak remains undefeated.

One has to wonder who will dethrone Gulak. The Philadelphia Stretcher has laid waste to a who’s who of the 205 Live babyfaces. Is there anyone left credible enough to do the unthinkable? With 205 Live rumoured to be merging with NXT in some capacity, would it safe be to assume Gulak’s usurper may even come in the form of someone more at home in the black and gold brand?

Humberto Carillo is interviewed before the main event. He is disappointed in his inability to become the Cruiserweight Champion last Sunday. Especially as he was not involved in the pin. He vows to earn another title opportunity. He feels he is in with a shot of winning it, as he believes Drew Gulak won’t be able to handle him one on one.

Another man who is looking to have another crack at Drew Gulak is the Twitter champion of 205 Live, Oney Lorcan. Lorcan is looking for revenge after being on the receiving end of a tempestuous beatdown from Tony Nese a few weeks ago. Lorcan wants a match with Nese tonight, and then he wants another title shot against Gulak.

Although he has a permanent angry look on his face, Lorcan is clearly enjoying the punishment he is inflicting on Nese in the early portions of this main event. So much so, that Nese literally scurries away from Lorcan before any further damage can be done. But Nese is a new man. He uses Lorcan’s charge against him and throws him into the barricade on the outside. Nese follows up by launching Lorcan over the commentary table. Lorcan barely makes the referee’s ten count.

If you think Lorcan comes across as a man possessed, then you have to remember how this match came about. Nese is a man possessed these days. His quest to earn respect from peers and fans is at an end. Nese is out for himself and will take out anybody who stands in his way, in any and every way he sees fit. That way just so happens to be one of rage, malice, and destruction.

Nese brings things back to his own pace which, to be honest, isn’t that much less frantic and rage filled than Lorcan’s. But the match is being dictated under Nese’s rules now. The leg scissors abdominal squeeze is locked in with more pent up frustration than normal. Lorcan more than likely hasn’t faced a challenge such as this in his time on 205 Live. His attempt to power out of the core squeeze is in vain as Nese cuts this off with ease.

Nese looks to his springboard moonsault, but Lorcan avoids further damage by moving out of the way at the last moment. Lorcan finally finds himself, hitting blockbusters and European uppercuts aplenty. As if in answer to earlier,  Lorcan is the one this time to throw his opponent into the barricade. He even goes one further, launching him again but this time high and far into the fans.

Those fans in question are lapping it up as Lorcan calls on them for support. Lorcan takes Nese back into the ring. He clotheslines Nese inside out for a close two count. A series of chest chops follow. He goes for a half and half suplex, but Nese lands on his feet on the other side, spilling Lorcan on his back and stomping on the ribs, earning a two count of his own.

It’s hard to call the outcome of this match now. Both are looking close to victory with their respective signature move attempts, but the blocks and counters keep things in stalemate status. This exchange crescendos with Nese going for his Running Nese finisher but receiving a high and hard dropkick as soon as he comes off the ropes.

The dropkick is enough to allow Lorcan to haul Nese atop the turnbuckle for an avalanche half and half. Yet again, however, Nese has an answer for Lorcan’s offense with Lorcan spilling to the mat. He retorts with a leaping uppercut that sees Nese fall to the outside.

Lorcan runs the ropes, looking for a somersault over the top. Drew Gulak, however, appears out of nowhere, clutching Lorcan’s leg and stopping him from charging to the other side. Lorcan scrambles for Gulak, incensed at the interference. Nese seizes the opportunity that this distraction has given him, rolling Lorcan up for a cheap school boy cover and the win.

Just like when Nese came to Gulak’s aid on the 205 Live previous, Gulak returns the favour. This shows to me two possible things. Either Gulak is as loyal to Nese as Nese is to him, and he will look out for his man. Or Gulak, worried about the outcome of the match seeing as that Lorcan had the upper hand, will do whatever it takes to ensure no wrestler has a credible chance to wrestle him for the title, and he is simply using Nese as a pawn in his game atop the 205 Live mountain.

In keeping with the question asked earlier, just who is next to face Gulak? While we don’t have an answer to that, Gulak is ensuring that that question remains unanswered.

The latest Ricky and Clive podcast is up for download now! Another solo Clive show for you this week, as Ricky is unfortunately once again working himself into a shoot. While not the best PPV WWE have presented this year, WWE Clash of Champions, as well as Raw and Smackdown, did offer up some major talking points that may inject even more creative juices into the weekly product as we gear towards Smackdown’s move to Friday nights and the impending hard draft split. Brock Lesnar, Luke Harper, and Rusev’s returns from Parts Unknown. The Fiend hijacking both the Raw Universal Championship scene and the WWE production truck. The reign of Baron Corbin as your King of the Ring. The reality tinted machinations of Sasha Banks’ character work. So much to digest in so little time, but try Clive will!