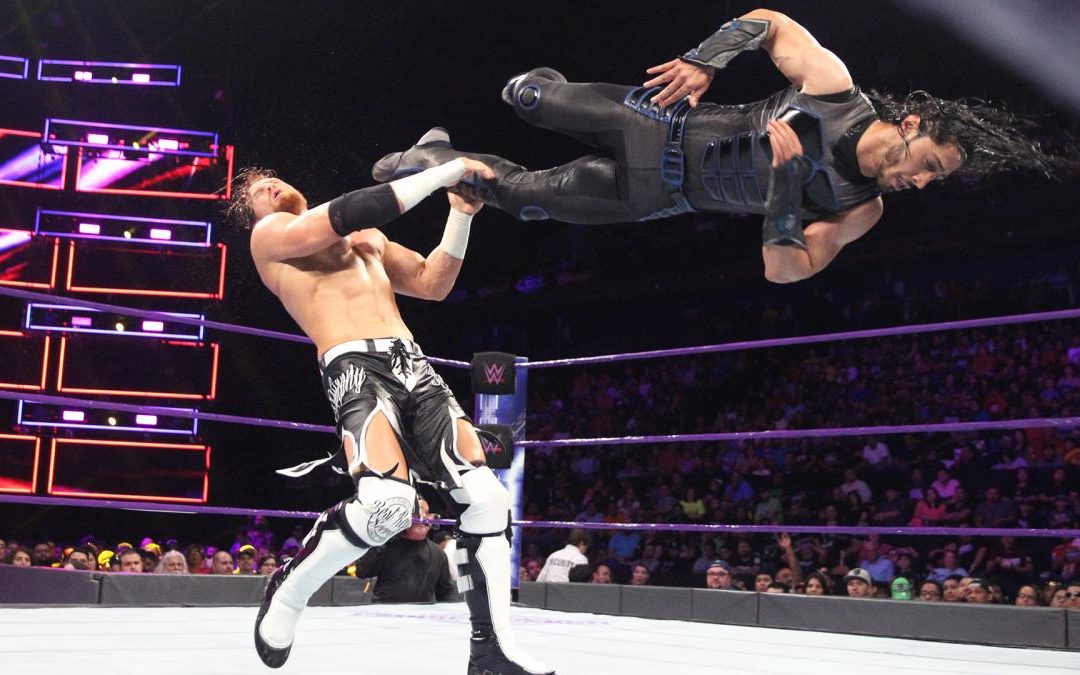 This week’s episode of 205 Live starts with highlights from last week’s Cruiserweight Championship match between Buddy Murphy and the retaining champion, Cedric Alexander. Drake Maverick announces that the ongoing conflict in the tag team division will continue tonight in a match between Lince Dorado and Brian Kendrick, and the main event of the show will see Mustafa Ali vs Buddy Murphy. Maverick states that this is the third chapter in a rivalry whose message of intent to deliver top quality bouts to 205 Live fans is palpable in its intensity.

Vic Joseph, Nigel McGuinness, and Percy Watson are at ringside for commentary this evening, and are joined by Drew Gulak who makes his way to the ring with his new associate, Brian Kendrick. 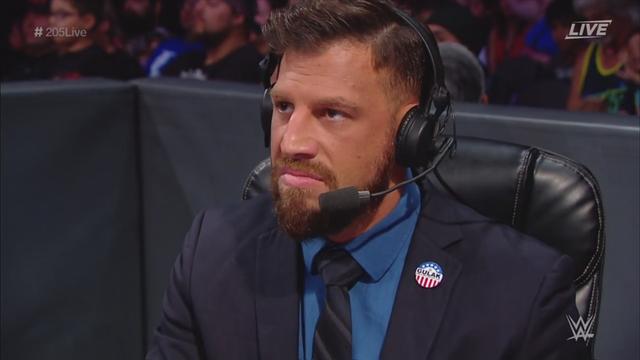 This majority of this match sees a cocky Kendrick strut around the ring delivering stiff offense in the form of knees to the back of the head, sidewalk knee-breakers, and variations of debilitating headlocks.

Even the spirited support of the fellow Lucha House Party members doesn’t phase Kendrick, who mixes it up with Kalisto and Gran Metalik on the outside, mocking the party atmosphere they bring to their team’s matches.  Dorado puts a stop to the mockery, however, as he jumps on Kendrick from the apron and floors him with a twisting hurricanrana.

Dorado’s control of the match continues with an impressive luchador moveset, finishing with him felling Kendrick on the outside with a suicide dive through the ropes.

Dorado gets to his feet and joins Kalisto and Metalik in calling out the “Lucha” chant yards away from an irate Gulak who stands to in a tense square off. The pause for breath allows Kendrick to throw Dorado into Metalik. Once Dorado is thrown back in the ring however, Dorado shakes off the brief Kendrick comeback and reverses his fortunes with a springboard stunner for a quick victory.

This sudden defeat for Kendrick enrages Gulak, who attacks Metalik and Kalisto at ringside. The Lucha House Party team up and check on each other inside the ring, staring down Gulak and Kendrick who smugly make their way up the ramp.

The commentary team gushes about last week’s 205 Live that featured the Cruiserweight Championship match. A highlight package of the excellent encounter shows how Murphy threw everything at Alexander, but through sheer willpower and determination, Alexander was able to retain the Championship.

Mustafa Ali appears on screen in the locker room. He states that the outcome of last week’s match not only made him proud of his friend for winning but hungry to compete. Ali questions whether Murphy has the heart that he himself has to become the Cruiserweight Champion.

TJP in recent weeks has made his feelings known about the standard of competition he has received on 205 Live of late, and his opponent this week doesn’t help matters. TJP offers his hand at the start of the match, but Keith falls for the trap and receives a short clothesline for his troubles.

To add insult to injury, TJP goes to the timekeeper area and picks up a microphone. He addresses the WWE Universe, reiterating his dislike for 205 Live General Manager Drake Maverick. He goes on to tease that there may be interest from Paige and Kurt Angle and that there may be developments in this matter soon. While he delivers his diatribe, however, TJP is still punishing Brian Keith with ease with some trademark kicks and submissions.

When Keith is in a sharpshooter, TJP throws down the microphone and leans back for extra torque, resulting in Keith tapping out and squealing in pain.

This was an innovative segment,  combing a promo from TJP with the destruction of an enhancement talent; a good use of the limited time available to the roster on the show. The narrative of a wrestler being unhappy with his place in the division is compelling. It will be interesting to see what comes of TJP’s claims that there may be interest from the Raw and Smackdown General Managers.

Vic Joseph says that although TJP has just hinted at leaving the show, the door is always open to bringing in new Cruiserweights. This results in a hype video for the upcoming 205 Live debut of Lio Rush. 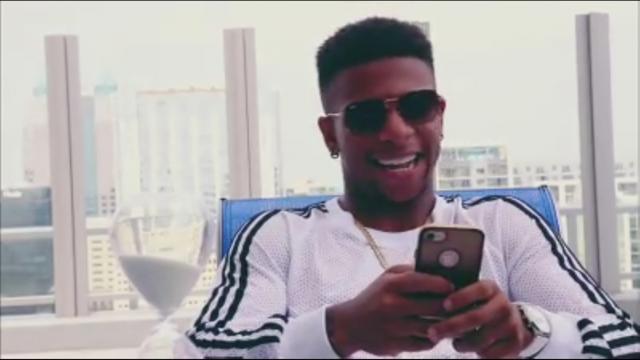 Joseph announces that next week’s episode will feature a six-man tag team match between the Lucha House Party and Drew Gulak, Jack Gallagher, and Brian Kendrick.

After Mustafa Ali has made his way to the ring, Murphy is asked backstage by Dasha Fuentes if his defeat last week hurt his chances of staying in the Championship picture. Murphy, talking with Tony Nese backstage, puts to bed that claim, saying that he is a juggernaut that nobody will be able to stop.

Despite Murphy’s claims backstage, the frustration at losing last week is clear for all to see in the early stages of this match, as he ragdolls Ali from corner to corner. Chops from Ali only anger Murphy further, but Ali has enough conviction about him to try and ensure Murphy isn’t as dangerous to his opponent as he was last week.

Ali eventually has Murphy atop the turnbuckle, seemingly looking for a sunset flip powerbomb. Murphy escapes and jumps off the ropes, delivering a variation of a Samoan drop that crashes Ali’s midriff onto the turnbuckle.

Like Alexander’s back last week, Murphy seems focused on the midsection of Ali, punishing him with sidewalk knee breakers and abdominal stretches. The ever-resilient Ali uses physical momentum to throw the heavier Murphy from off his back into the corner. He capitalizes on this by impaling Murphy’s head into the mat with a standing reverse ‘rana.

Trying to regain his composure, Murphy crawls to the other end of the ring, but Ali wastes no time and pounces with a club to the back. Murphy is now caught in the ropes. This is a familiar destination in Murphy’s matches with Ali. Ali remembers this and takes advantage with a rushed frog splash from the top rope. Both men are favoring their ribs after Ali’s failed pin attempt.

They gingerly get to their feet and trade heavy forearm strikes back and forth, expending what little energy they have left. Murphy blocks a final blow, and after a short flurry of blocks and counters being applied, Ali gains the upper hand with an enziguri.

Ali then attempts his X-factor facebuster from through the ropes, but a knee to the jaw from Murphy swings momentum his way. Murphy drags his opponent out to the apron and looks for his devastating running suplex. Ali struggles out of the move, however. He dodges an incoming knee from Murphy who connects with the corner stanchion. Ali wriggles back out to the apron and finally delivers his facebuster.

Ali goes back in the ring and climbs the turnbuckle, but Murphy, living up to his “juggernaut” moniker, runs over and superkicks Ali’s trapped head. Ali is now on Murphy’s shoulders in a supine position. With his back being stretched the wrong way, Murphy’s rotating DDT does significant damage.

The action spills to the outside. The trademark Ali comeback is on the cards. There looks to be no doubt as to how this match will turn out now as Ali delivers a breathtaking tornado DDT from the top rope to Murphy onto the floor. Murphy looks to be out cold as he is rolled back into the ring.

Ali looks to finish the match as the victor with his inverted 450 splash finisher. He does win the match, however, it is not by way of the “054”, rather by disqualification. This is because, seemingly out of nowhere, Hideo Itami appears on the apron and sweeps Ali’s legs out from underneath him. The referee calls for the bell due to the interference. 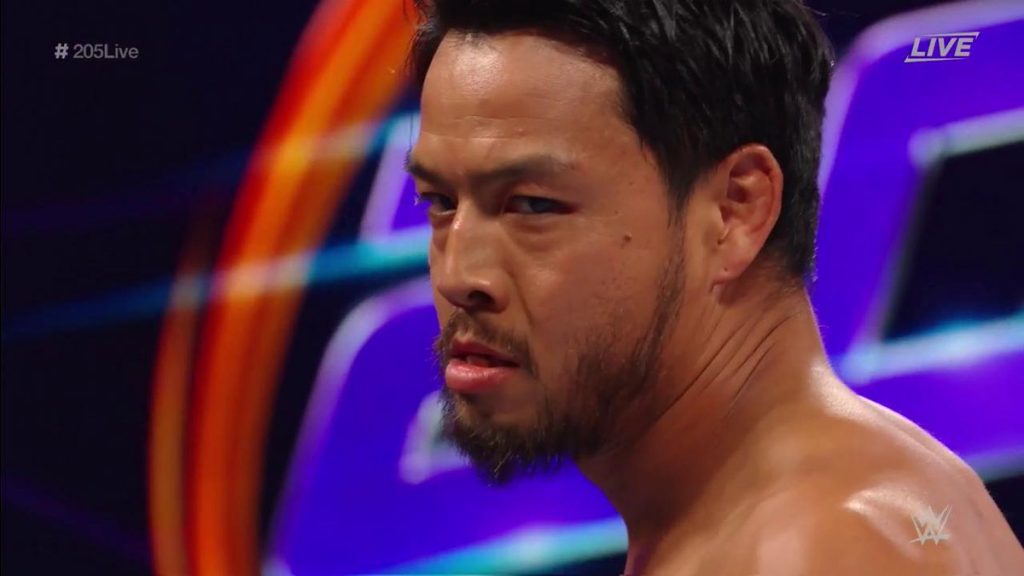 The narrative going into the match between Ali and Murphy was to see who had what it took to contend for the Cruiserweight Championship. However, Itami clearly has other ideas as he screams in Ali’s face that he is next in line. He continues attacking Ali and posing for the audience, as extra officials and medical examiners come to check on Ali as 205 Live goes off the air.

This is a welcome change to the main event scene of the Cruiserweight show. With Itami’s lack of respect for his fellow man and his penchant for inflicting violence on others, he now poses a real threat to not only the Championship contenders but Cedric Alexander himself.