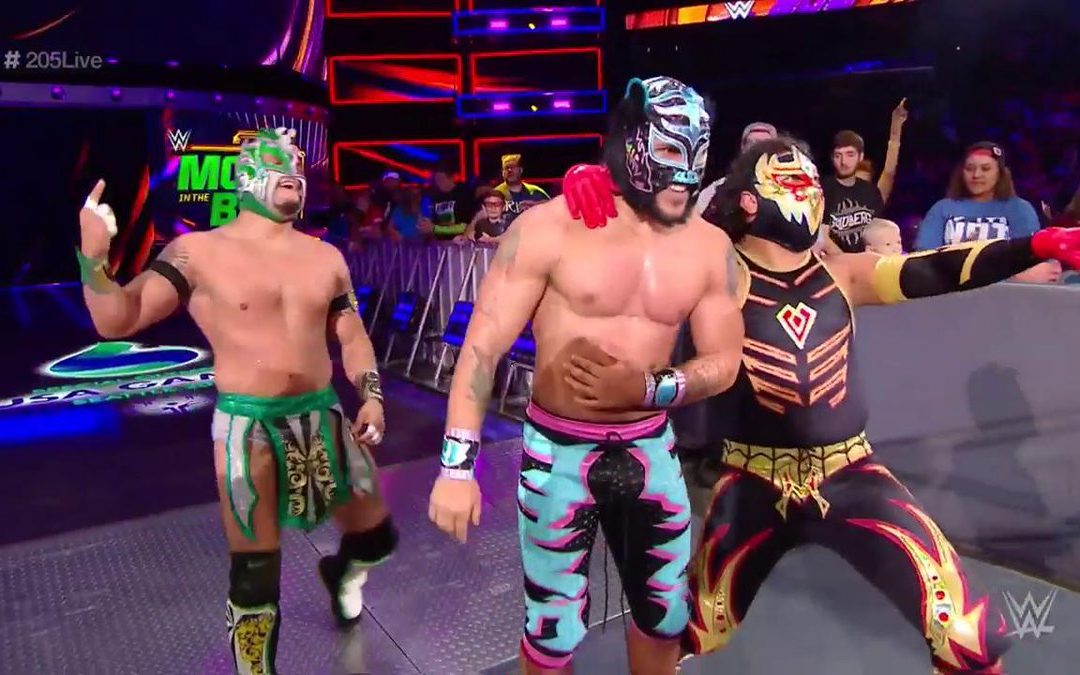 205 Live this week begins with Drake Maverick’s recap of last week’s main event, which ended with Hideo Itami interfering in the match between Mustafa Ali and Buddy Murphy. Maverick states that as punishment for last week’s selfish actions, Itami has been banned from competing on tonight’s show.

Maverick assures the audience that Mustafa Ali hasn’t let the incident last week knock his confidence, as he will take on Tony Nese in the main event. The opening bout will Brian Kendrick, Jack Gallagher, and Drew Gulak take on the Lucha House Party, hopefully putting an end to the differences the two sides have encountered in recent weeks.

Vic Joseph is joined by Nigel McGuinness and Percy Watson to call the evening’s action. As the Lucha House Party make their way to the ring, Brian Kendrick explains to Dasha Fuentes backstage that the Lucha House Party has staked a claim to be the best tag team on 205 Live, and that this contingent has to go through them. Jack Gallagher says that their opponents’ numbers advantage is no longer an issue, thanks to their alliance with Drew Gulak. The submission specialist finishes by saying he has enlisted these like-minded men to help him teach the “hoochadors” a lesson by making them tap out.

Both teams are now in the ring and Kalisto and Gallagher begin the match. Quick tags are exchanged as both teams struggle to get an upper hand, however, the luchadors win early points with a series of tags, as well as individual and tandem moves.

With Gulak the legal man, he and his teammates compose themselves out on the floor, but Dorado is aided by his own team to vault the ropes and springboard somersault onto his opponents.

This angers the grapplers, but they still struggle to swing momentum their way, only being able to do so with cheap interference from the apron by Brian Kendrick, sweeping Kalisto’s legs from the middle turnbuckle. A now angry Kendrick tags himself in and clubs Kalisto from behind, then interchanging between clubs to the back, and submissions and suplexes, before gifting the dangerous Gulak a vulnerable Kalisto.

The Philadelphia Stretcher wastes no time in applying his own torture. Kalisto fights back, but his hot tag is missed by the referee due to keeping Kendrick and Gallagher at bay; more cheap tricks by the men who are struggling to make a legitimate, long-standing impact in the match. Gallagher throws Kalisto around on the outside as the referee deals with the frustrated Metalik and Dorado. The Englishmen tags in and finally gains his team the dominance they have missed so far. Frequent tags between the team keeps them fresh, as Kalisto is systematically picked apart in a variety of nasty submissions.

Kendrick takes his prize to the corner with vicious strikes, but a Tornado DDT to Kendrick allows Kalisto to scurry for help from Metalik, who takes it to the now legal Gallagher with chops, superkicks, and his usual effective use of the ropes. Dorado is tagged in but Gallagher is having none of it, tagging the game Gulak into the ring. Dorado has a brief spell on top with a hurricanrana, but a lariat from Gulak allows him to attempt a pin. His pull of the tights is spotted by the referee. Being caught distracts Gulak long enough for Dorado to reverse the pin, trying the same illegal tactic, but Gulak kicks out.

Things break down quickly as all men rush the ring, taking each other out. A double Golden Lynx from Dorado to Gulak and Gallagher sees them stunned, rolling out to the floor. The arieally attuned Metalik and Kalisto take quick advantage of this with stereo springboard flips, landing on their opponents to a chorus of cheers from the crowd.

Dorado looks to finish the sequence with a suicide dive, but Kendrick appears from nowhere, whipping Dorado’s head back in critical fashion and applying his finisher, the Captain’s Hook. Dorado has nobody to help him and has to rely on his own resolve to struggle to the ropes. Kendrick rolls over to reapply his finisher, but Dorado uses the momentum of the roll through to pin a surprised Kendrick. The referee counts to three for the win.

The commentary team reminds us of Hideo Itami’s actions on last week’s 205 Live, and we see a social media video from the man in question. Itami says Mustafa Ali and Buddy Murphy don’t deserve to be in the main event, nor do they deserve to be the Cruiserweight Champion. Itami finishes by warning Ali and Murphy that he will make them respect him.

General Manager Drake Maverick is backstage with Buddy Murphy. Murphy says that unless the reason Maverick called to see him isn’t to make a match between Itami and Murphy, he isn’t interested. Maverick says Ali has made the same request of an opponent. According to Maverick, however, neither match is happening. Emotions are running high, and he doesn’t want another 205 Live main event ruined. Until Maverick decides when these matches take place, he suggests that Murphy keeps the peace.

Ali is in the changing room, saying how close he was to beating Buddy Murphy last week, but says he hopes Murphy and Itami are watching his match with Tony Nese tonight, as he looks to lay claim, once again, to compete for the Cruiserweight Champion.

Tozawa takes on enhancement talent Steve Irby this week. Unlike TJP, who disrespects his lesser opponents of late, Tozawa seems excited to take on Irby. This respect doesn’t stop Tozawa from gaining the upper hand immediately with knife edge chops and a kick to the head.

Irby fights back and lands some offense, but this only fires up Tozawa, who is particularly vocal tonight with his caws and battle cries. He sets Irby up in the corner after a spinning kick to the head and quickly finishes the match with his top rope senton bomb finish.

After the match, Vic Joseph reminds the WWE audience that Drake Maverick is always looking to sign new talent. This leads to another video hyping Lio Rush’s upcoming 205 Live debut. Tony Nese is working out backstage, addressing the camera stating that Mustafa Ali made a mistake in accepting his challenge, as Nese says tonight’s match is about him making a name for himself at Ali’s expense. Tony Nese makes his way to the ring after Ali, surprising his opponent by bringing out his training partner, Buddy Murphy, for “back up”. As the two circle Ali, Cruiserweight Champion Cedric Alexander’s music plays. Alexander sensed the trouble that Murphy looked sure to be on the receiving end of, and joins his friend at ringside, ensuring Ali isn’t victim to intimidation, or worse.

The referee rings the bell, and Nese sucker punches Ali repeatedly in the torso. The strength advantage works in Nese’s favor, but Ali shakes off the early beatdown. Outside, Ali looks to chase Nese down but meets a roadblock in the form of Murphy. Nese capitalizes, picking him up and launching him into the corner stanchion. Nese rolls Ali into the ring for a near fall.

Nese is on top throughout the early portions of the match, throwing his weight around and showcasing his strength, but an X-Factor from Ali allows him a breather. However, the respite is only fleeting, as a Tornado DDT attempt is blocked by Nese, who regains control by way of heavy strikes and forearms.

Nese is certainly living up to the intent he talked of before the match, but a charge attempt ends in a double clothesline, flooring both competitors. This looks to be a change of fortune for Ali, but a top rope moonsault attempt is thwarted my Nese, who lands on the mat and rushes Ali with a high-velocity lariat.

The Premier Athlete attempts a Running Nese but receives a superkick from the resilient Ali. Ali tries to bring the match in his favor, which he has struggled to do so, with his “054”, but Murphy pulls Nese outside to avoid the finisher. Alexander is disappointed, seemingly about to square off with the two.

Ali uses this distraction to vault the ropes to the outside. Alexander and Murphy rekindle their recent rivalry and a fight commences between the two. As they settle their differences elsewhere, Nese powerbombs Ali into the turnbuckle. Only earning him a two-count, Nese is enraged and once again attempts his Running Nese.

Resilient as ever, however, Ali blocks the finisher with a superkick, and this time is able to land the “054” for the victory.

Ali has a microphone and calls for Maverick, who Ali knows was watching, to make a triple threat match between Itami, Murphy, and himself. Dasha Fuentes looks on backstage and is asked for his reaction to Ali’s comments. 205 Live goes off the air with the General Manager acquiescing to the match request, which will take place on next week’s 205 Live.