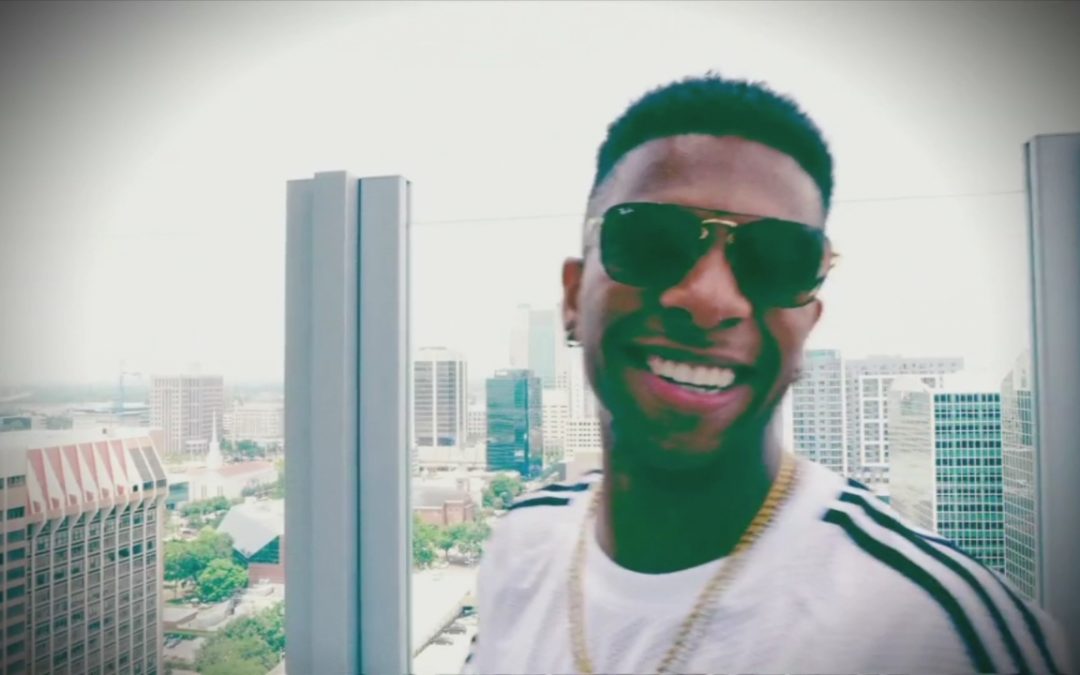 This week’s 205 Live starts with a video package of General Manager, Drake Maverick, promoting tonight’s matches. Akira Tozawa and Tony Nese will battle it out to see who can take a step closer to challenging for the Cruiserweight Championship. Lio Rush will make his 205 Live debut, showcasing why he is a marquee signing for the brand. And the Lucha House Party will take on Drew Gulak, Jack Gallagher, and Brian Kendrick in elimination rules tag team action. Vic Joseph is joined by Nigel McGuinness and Percy Watson on commentary. McGuiness and Watson share “pleasantries” as the first match’s competitors make their way to the ring. 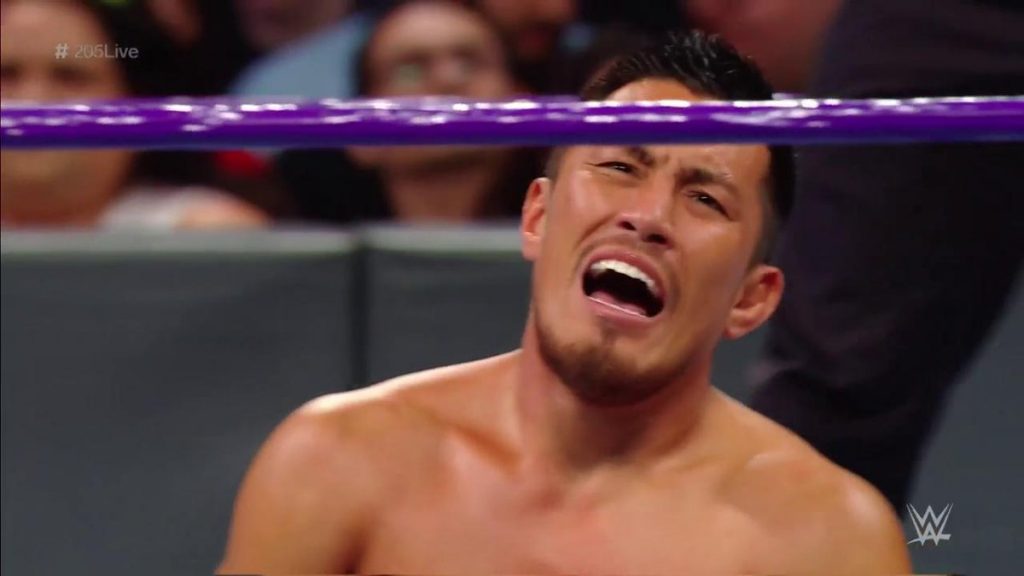 Once Tozawa is in the ring, Buddy Murphy makes a quick cameo during Nese’s entrance, showing support for his training partner.

Tozawa and Nese start off their fight with their signature taunts; Tozawa trying to intimidate with his signature battle cry, who receives a typical Nese bicep flex for his troubles. They move on to exchanging slaps and forearms to the face when things begin to heat up. Nese scores the first pinfall attempt. Despite a quick flurry of offense from Tozawa, Nese is on point with his counters. He catches Tozawa on the outside and drops him onto the apron. Nese brings the match to his pace back in the ring, methodically picking Tozawa apart.

With Tozawa now in a torture rack, the Japanese star wriggles free and gains the upper hand. He goes for his top rope senton bomb, but Nese slithers to the outside. Almost without breaking stride, Tozawa drops from the top, runs the ropes and lands a suicide dive headbutt, and gains a pin attempt of his own after throwing Nese into the ring and felling him with a dropkick.

Tozawa tries to keep momentum on his side, climbing the ropes, but Nese runs over to stop the ascent. The Premier Athlete kicks Tozawa onto his shoulders and takes him out. A back and forth ensues, with Tozawa once again climbing the ropes, but a vicious right arm stuns Tozawa. The grogginess doesn’t last long, however, as he is able to counter a superplex by dropping Nese with a release front suplex of his own. He finally connects with his senton bomb finisher – a move that Tozawa has struggled to do in recent matches – and hooks Nese’s leg for the victory.

As Tozawa’s music plays, highlights are shown of the end of last week’s triple threat match between Buddy Murphy, Mustafa Ali, and winner Hideo Itami. The camera cuts to Drake Maverick backstage who is speaking with Cruiserweight Champion, Cedric Alexander. The champion states that it’s time that he defends his title soon, and suggests Itami as a contender. Maverick shoots the idea down, saying he doesn’t reward bad behavior. Alexander retorts by saying he wants to build his legacy, and despite Itami being disruptive and oversensitive, he has earned the opportunity. Maverick says he will consider it. Up next is Lio Rush’s 205 Live in-ring debut.

Rush takes his time preparing for the match, pandering to the crowd on the way to the ring, then painstakingly taking off his jewelry. Dewey James frustratingly paces his side of the ring. Once ready. Rush proffers a handshake which James looks to accept, but Rush slaps him instead, beginning a whirlwind of speedy offense which has James reeling.

Rush may seem slight, but his speed is such that he is hard to manage. James stands out on the apron to compose himself, but Rush’s handstand off the ropes sees his legs clock James. The egotistic Rush checks the proverbial watch on his wrist, deciding to put James out of his misery with a high frog splash for his finisher. 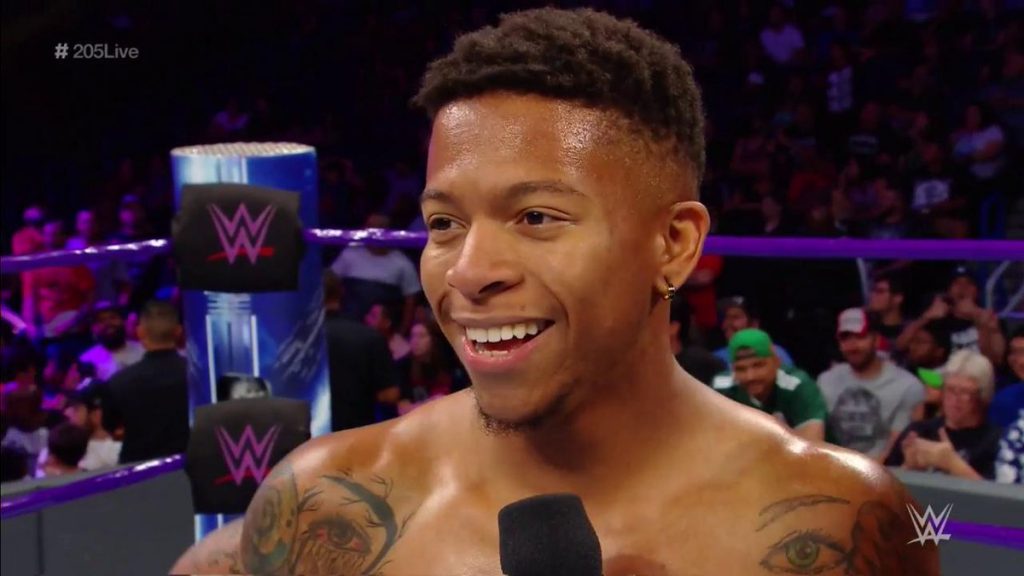 Lio is interviewed in the ring after his match, asked what can the Cruiserweight Division expect. The self-coined “23-year-old piece of gold” states he does things in the ring that the rest of the roster can only dream of doing. He continues by saying the roster has no style, finesse, or presence. He finishes by saying that every hour, on the hour, it’s Rush hour and that people will feel the Rush.

Cedric Alexander is walking backstage, and Renee Young asks for an explanation as to why he would offer Itami a championship match. Alexander reiterates that he takes on all comers, and is not intimidated by him. Itami walks up to Alexander, goading the champion in Japanese. They begin a shoving match, and Maverick rushes in to break things up. Maverick says to wait till next week. Whether that’s to determine the match will take place or if that match will be next week is not confirmed. What is certain however is that Mustafa Ali will wrestle Buddy Murphy in a “No Disqualification” match next week.

Gulak, Gallagher, and Kendrick are seen in smug discussion with each other backstage, as Kalisto, Gran Metalik, and Lince Dorado get mentally prepared for the main event. 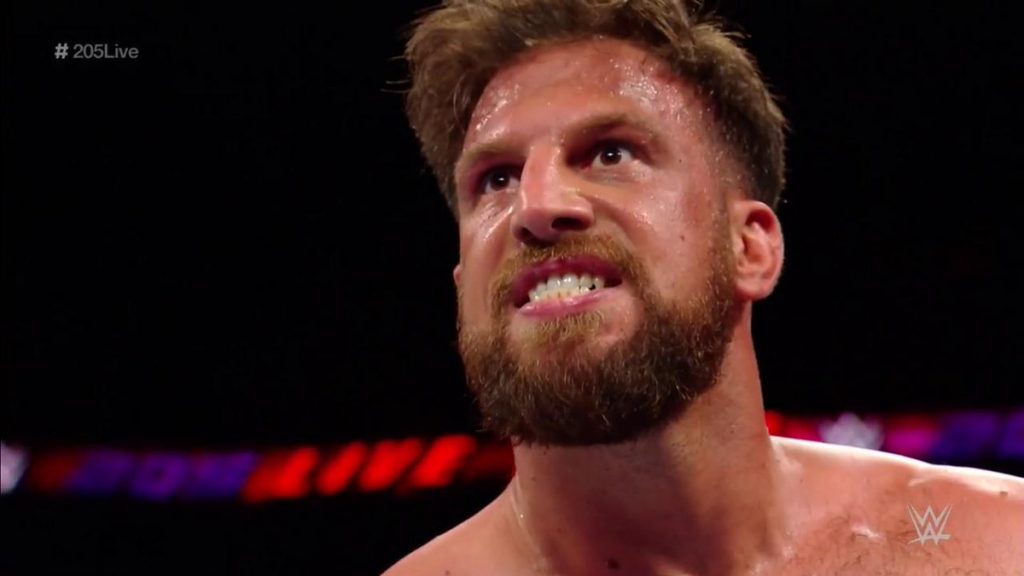 The Lucha House Party taunt their opponents who stand on the apron with the “lucha” chant but make a statement immediately with a superkick to the floor for all three wrestlers, followed up by different versions of dives to the outside. The three grapplers are rocked as the referee instills enough order to be able to ring the bell.

Dorado has the initial momentum and is not in the mood for games anymore as he looks to score a quick pinfall over Gallagher, but Kendrick intervenes. This gives Gallagher enough time to compose himself as Metalik is tagged in and attempts an incoming attack from the ropes. Gallagher lands a brutal headbutt and a three count to eliminate Metalik; the early confidence for the luchadors loses impetus in the blink of an eye.

Dorado and Gulak are in the ring as the match finally calms down, with Gulak keeping Dorado grounded. Dorado fights back, but Gulak pulls off Dorado’s mask in the scuffle. A panicked Dorado scurries to the outside and under the apron to put the mask back on, as Gulak and his teammates laugh at the incident.

Gallagher comes in and continues to punish Dorado who is no doubt out of sorts from the unmasking. Gallagher does significant damage to Dorado’s left arm, and tags in Kendrick who continues to cause more damage to the body part. Kenrick employs underhanded tactics by taunting Kalisto in his corner. This riles Kalisto, who needs to be held back by the referee. With the official’s back turned, Gulak and Gallagher rain down punches on to Dorado’s upper body.

Kendrick comes over to join in the fun, but Dorado fights back with a Golden Rewind, eliminating Kendrick from the match. Another sudden victory changes the supposed path that the match will take.

Gulak comes in and works on Dorado’s arm again, eventually tagging in Gallagher who incorporates a more smash-mouth offense into the continued wrenching of Dorado’s shoulder. Dorado breaks free and hits Gallagher with an enziguri, desperately trying to tag Kalisto in, but Gulak rushes the ring and continues to punish Dorado.

Dorado again breaks out of the hold and is inches away from making the tag, but the already eliminated Kendrick pulls Kalisto’s legs off the apron just in time. The distraction finishes off any hope of Dorado getting respite, as Gulak applies the Gulock. Dorado is eliminated from the match. It is now two to one in favor of Gallagher and Gulak.

Kalisto is in the match for the first time and should be fresh, but Kendrick’s interference has rocked the luchador. Gulak seems to be enjoying himself, but his enjoyment slowly turns to rage, as his punches and kicks become more temper laden by the strike.

Gulak tags in Gallagher as they try some tandem offense. Kalisto, however, kicks Gulak’s leg and tricks the incoming Gulak into falling through the ropes. Kalisto takes advantage of the change in fortune and hits Gallagher with the Solido Del Sol. We are down to singles action between Kalisto and Gulak now, as Gallagher is eliminated.

Kalisto wastes little time in keeping the momentum, somersaulting over the top rope and flooring Gulak. He pours Gulak into the ring, but the over-assertion has sapped Kalisto of energy. Luckily for him, Gulak is nursing what appears to be an injured right arm.

Both exhausted, Gulak and Kalisto gingerly get back to their feet. Kalisto attempts another Solido Del Sol, but Gulak stops him by this time trying to rip Kalisto’s mask off. The panic leaves Kalisto vulnerable, as Gulak applies his dragon sleeper finisher for the overall victory.

As Kalisto lies on the floor, Gulak picks up Penelope the Pinata from the commentary table, rips it apart, and throws it into the crowd. Gulak makes his way up the ramp, mockingly bowing to Kalisto. McGuinness comments that Gulak’s ideology is better than that of the Lucha House Party.