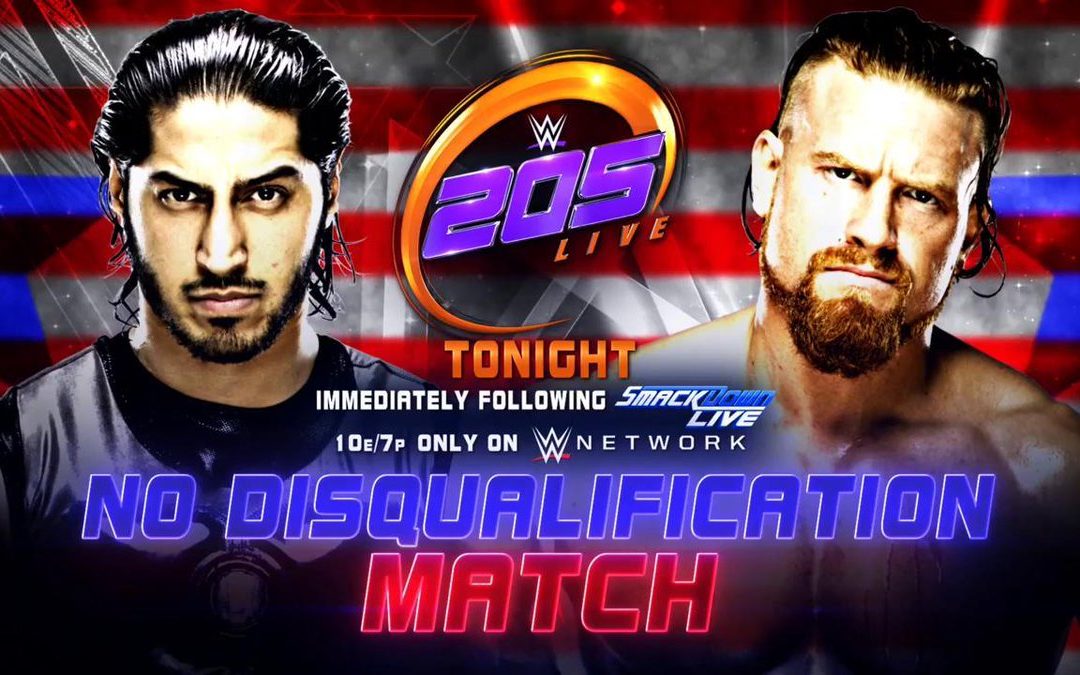 This week’s episode of 205 Live begins with a reminder of last week’s backstage altercation between Cruiserweight Champion, Cedric Alexander, and Hideo Itami. This butting of heads has caused 205 Live General Manager, Drake Maverick, to make a title match between the two for next week. This should be an intriguing clash, with both men untested against each other.

As for tonight, Maverick is giving Mustafa Ali and Buddy Murphy the opportunity to settle their differences in a No Disqualification match. Maverick says that tonight’s “rubber match” must provide a winner in this brutal and physical bout.

Lastly, Maverick states that TJP will face an opponent of his choosing after TJP’s derogatory comments towards the 205 Live roster these past few weeks. TJP has been one of the wrestlers involved in the “mid-show enhancement talent” matches. The inclusion of this style of match, as well as their execution, can at times be formulaic. It is refreshing in this instance to see these matches have a long-term story in mind.

Vic Joseph is joined by Nigel McGuinness and Percy Watson as they hype tonight’s show, as TJP’s entrance music begins to play. TJP has a microphone and brings up how opponents of Maverick’s choosing has been the case for his recent run of matches, but tonight he is finally going to get what he wants. TJP still bemoans the fact that he is not in the main event, or that it isn’t a Cruiserweight Title match. TJP will give Maverick another chance, suggesting that there might be a decent opponent for the “Cruisergreat”. TJP waits for his opponent’s music, which is that of the returning from injury Scottish Supernova… 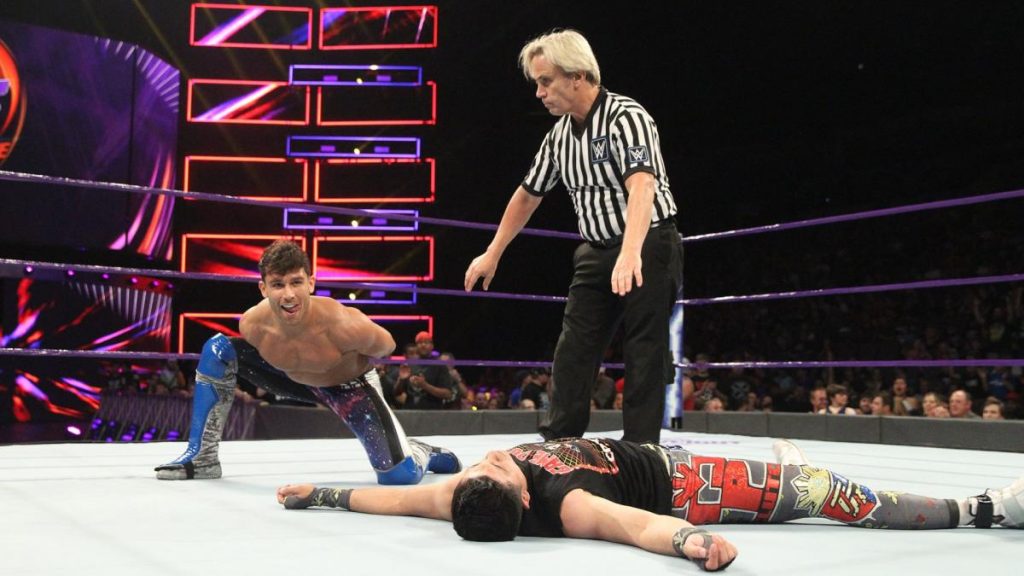 As the bell rings, TJP tries to back up his confidence by rushing Noam Dar before he even has his jacket off. Dar is game, however, enjoying his return. His adrenaline is focused in short range attacks to TJP’s midriff, sucker-punching the inaugural Cruiserweight Champion. TJP has no time to recover whatsoever as Dar hits him with his running enzuiguri-esque knee strike finisher for a quick victory.

I may have just criticised the “squash match” formula that 205 Live has relied upon above, however, TJP has run his mouth so much recently, that his comeuppance was due. Additionally, if this leads to a program between these two technically sound wrestlers, then we may be in for a sleeper hit of a rivalry for the Summer.

Vic Joseph leads the viewers to footage of the Cruiserweight Championship Tournament match between Ali and Murphy, as well as their rematch two months later, hyping the main event for tonight. Murphy is now backstage and reminds us that he is the Juggernaut of 205 Live, and if it wasn’t for Ali, he would be Cruiserweight Champion. He says that no rules for tonight’s match means he’ll be able to put Ali in a hospital where he belongs.

Dasha Fuentes approaches TJP backstage for comments on his loss, but the ever-petulant Perkins storms off. TJP may not be to everyone’s taste, but his commitment to this childish and arrogant persona should be commended; he’s just so easy to hate! 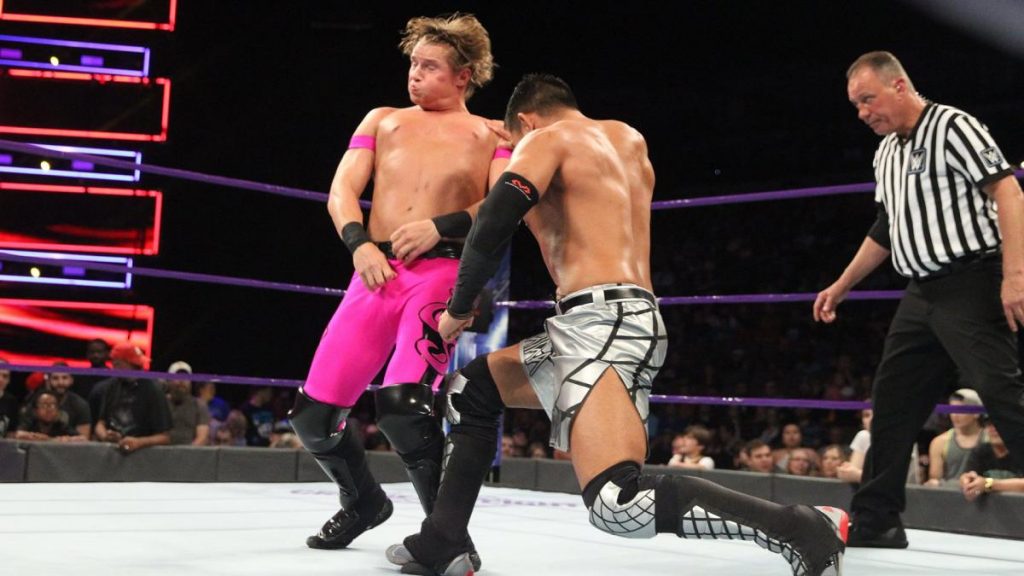 Tozawa is in the ring ready to face off against his opponent but looks confused as Lio Rush’s music plays. Rush is in normal street clothes, however. It would appear that Rush will merely be a spectator for the match. Tozawa wastes no time in delivering his signature offense and character work for the crowd to enjoy. Rush is also impressed by what he sees between the ropes.

Tozawa is unsure of what to make of this scouting mission. Strife catches him momentarily off guard, charging him in the corner. Strife delivers more offense, but this only angers Tozawa. He works through his sequence that ends with a snap side suplex and defeats Strife with the top rope senton. 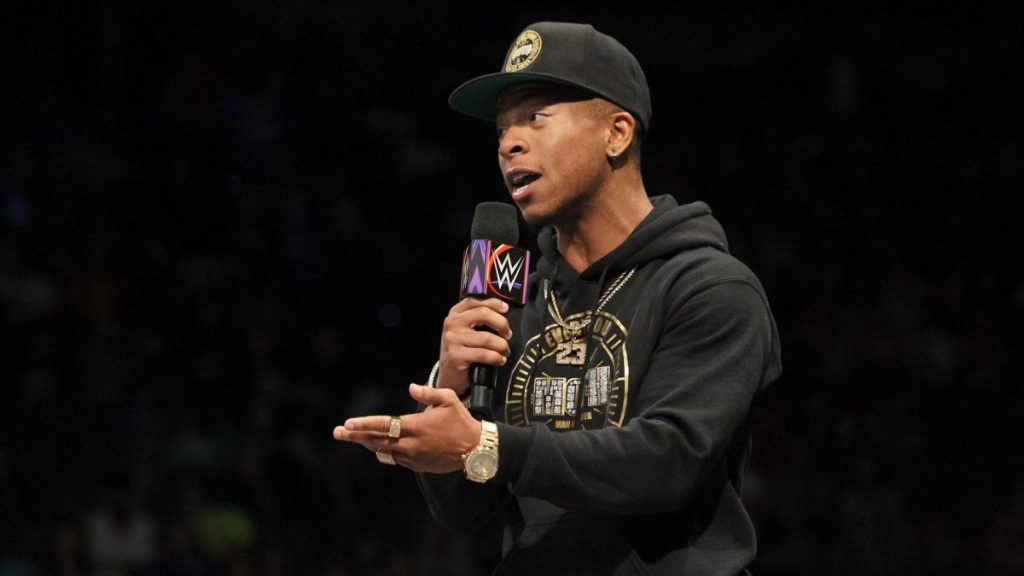 Tozawa celebrates in the ring, throwing the occasional glance at Rush, who eventually takes a microphone. He says the match was incredible, and that he is a fan. Rush continues to heap praise on Tozawa, but then he asks himself what has Tozawa really done since he was the Cruiserweight Champion, suggesting that he is just waiting around for opportunities. Rush says the difference between him and Tozawa is that he doesn’t wait for anything, that he is too quick and just too good to wait. Rush calls his own shots and suggests that Tozawa face off against the man of the hour, and “feel the Rush”.

Another enhancement talent match is in the bag, but this has been used to begin a program between Tozawa and Rush. Perhaps these mid-show squashes do have their place on 205 Live, but a change in formula would still be welcome more often in that regard.

Mustafa Ali is backstage, explaining that Murphy is dangerous, and is more so than ever before, what with the No Disqualification match tonight. But Ali says that instead of running from danger, he runs towards it. Tonight, Ali will prove to the world that the Juggernaut is just a human after all. 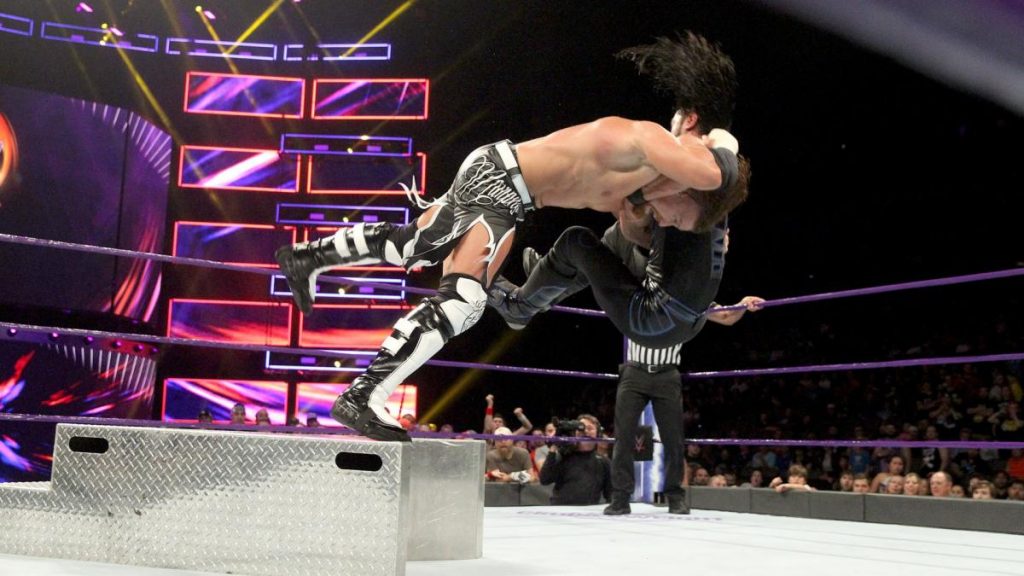 Murphy makes his way down the aisle and stalks Ali who is already in the ring. Ali motions for Murphy to bring it, and when he does, he dropkicks Murphy off the apron. Ali is sending a clear message of his intent for this match. Ali climbs the turnbuckle and somersaults onto Murphy, before launching him into the fan barrier. Ali’s immediate violence is a direct reaction to Murphy’s claim that he will hospitalize Ali.

Once Murphy is poured into the ring, where the referee finally signals for the match to start, he kicks Ali from a supine position and throws Ali to outside the ring next to the commentary team. Murphy launches Ali onto the table, wiping out Joseph, McGuinness, and Watson in the process.

The rivalry between these two is an intense one. They have clashed many times before, and the intensity is on full display tonight, as both men take turns at ragdolling each other around ringside. Ali clotheslines Murphy over a barrier, as the brawl is taken out into the arena. With Murphy back over the barrier, Ali channels Jeff Hardy by running the beam, but Murphy catches him and drills his head onto the steel ramp. Murphy’s assertion of dominance is now in place after a suplex onto the unforgiving surface.

Murphy now has Ali back in the ring, applying pressure from behind to Ali’s back. A punt to Ali’s spine, along with a violent Irish whip into the corner, quashes any immediate comeback. Some of Ali’s best 205 Live matches have been with him coming from underneath after prolonged punishment. This trope looks to repeat itself tonight, with Murphy picking apart his opponent.
McGuinness states that despite this, Murphy needs to be careful, as Ali can switch it on at any point. As if on cue, Ali begins to swing momentum back in his favor with a catapult onto the turnbuckle, followed by a dropkick. The Juggernaut is rocked with an X-Factor to Murphy who is, not for the first time in this series of matches, tangled in the ropes. Although this sequence has been similarly utilized before, the difference in offense keeps things fresh; a testament to the wrestlers’ innovative and varied repertoires.

Murphy briefly comes to, dismantling the steel steps with the intention of using them as a weapon. The steps are abandoned on the apron however as Ali clubs Murphy in the back. Ali continues to wreck the furniture by prepping the commentary table for action, but Murphy baseball slides into the steps which cannon Ali back into the table. Murphy uses the steps as a silent tag partner, vaulting off them and somersaulting onto Ali outside. The height on this leap was incredible, however not enough to gain a victory. The near fall back in the ring angers Murphy, who props the steps up into the corner, monkey tossing Ali onto them.

Murphy doesn’t look for a cover this time, throwing Ali into the steps again. After another failed pin attempt, Murphy looks for another flip, but Ali counters it, launching Murphy into the steps by way of a hurricanrana. Ali tries to capitalize with an 054, but Murphy catches him with a superkick, then a devastating powerbomb. Once again, the referee is only able to count to two.

The frustrated Murphy lays the steps on the floor, spreading Ali on top. Murphy climbs the turnbuckle, but Ali rolls off and hits the ropes, causing Murphy to lose his balance. Ali erects the steps vertically. He uses the unsteady structure to superplex Murphy off the top; a massive move that reminds me of Kurt Angle’s Olympic Slam to Shane McMahon at King of The Ring 2001. With that move earning Angle a victory, history does not repeat itself, however, as Murphy escapes defeat and rolls out of the ring.

Murphy and Ali are exhausted at the commentary table now. Murphy tries to stand on the barricade, but Ali vaults the table and smashes Ali onto the table with a Spanish Fly. Sickeningly, the table doesn’t break, only adding to the damage the move may have done to both men. Ali is pulling out the stops now, his high flying style lending itself very well to a weapon-laden environment.

Back in the ring, in a horrible twist of fate, a knee to Ali’s face sees him trapped in the ropes. Murphy proceeds to pulverize Ali with a series of knees to the face. He untangles Ali and delivers another knee strike. Ali kicks out once again.

The steps come into play for the final time. Murphy’s intentions are unknown as he lays the steps down. But Ali, out of nowhere, crashes Murphy’s head onto the mat with an ultimate tornado DDT off the steps. This is one devastating move too many for Murphy, as Ali covers him for the victory. A wounded Murphy looks on from outside as Ali gingerly celebrates with the crowd.

I was initially skeptical about this match, wondering how different it could be from the already excellent series of matches between the two. But the inclusion of weapons only intensified their disdain for one another. Whether used as a weapon, launching pad, or landing site, the array of furniture was used exceptionally, allowing both men to add an extra layer of impact to their already impressive arsenal. I may have been on the fence at the beginning, but my wish to see Ali and Murphy “fight forever” is firmly reestablished.