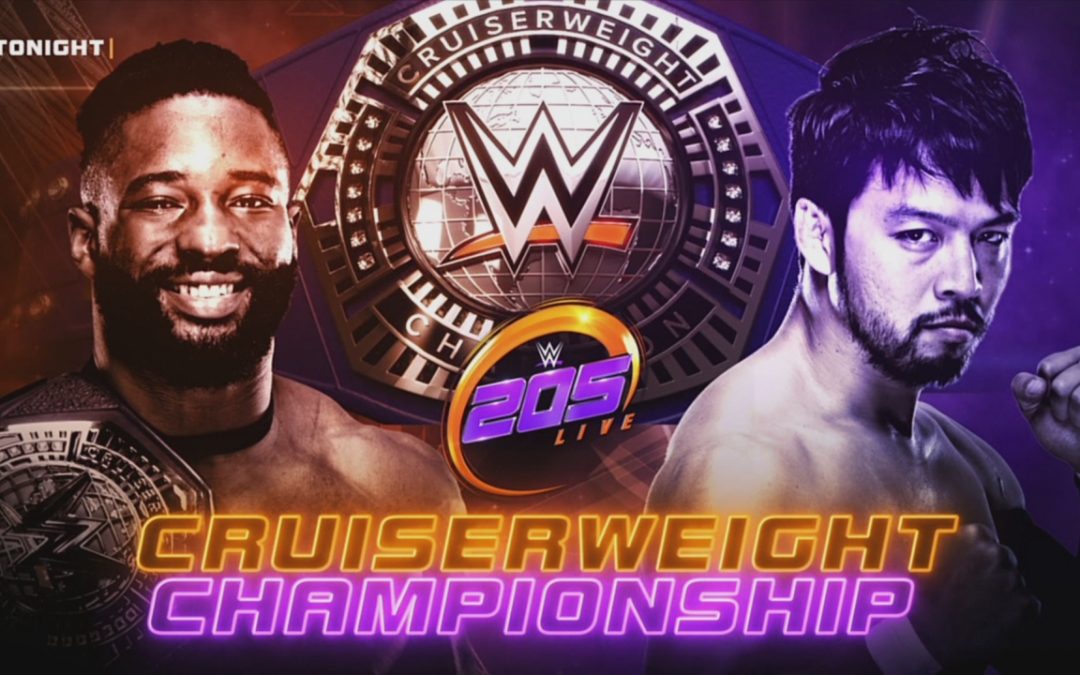 This week’s 205 Live starts with a highlight video bulldozing his way into the main event scene of the Cruiserweight Championship scene, coupled with Cedric Alexander wanting to cement his legacy as a fighting champion. General Manager, Drake Maverick, confirms that the two will have a Cruiserweight Championship match tonight. Vic Joseph is joined by Nigel McGuinness and Percy Watson on commentary. 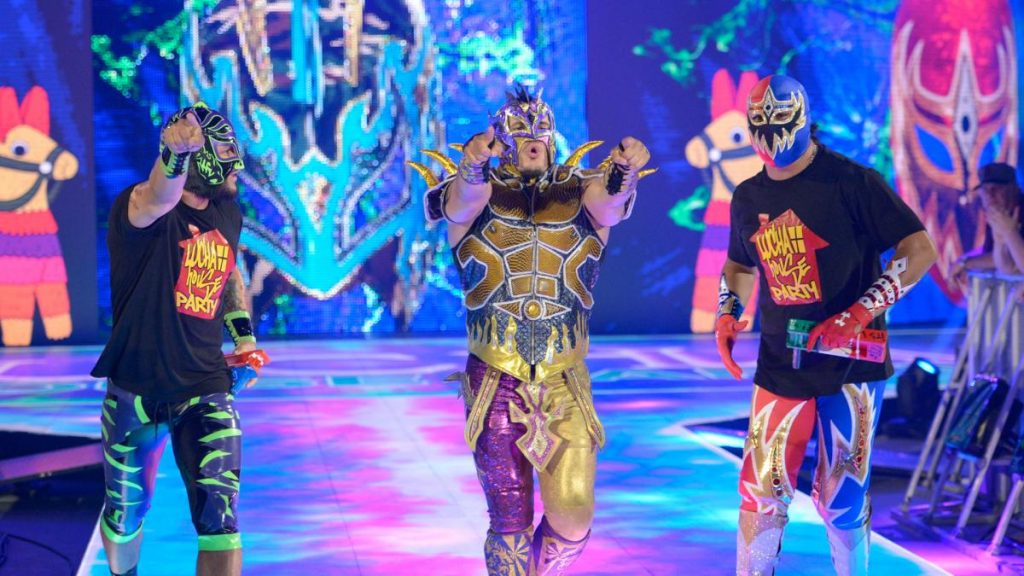 Once Gran Metalik and Lince Dorado accompany Kalisto to the ring, Tony Nese reminds the crowd of the eight reasons why he is the Premier Athlete, pointing at his sculpted torso. He introduces his training partner to the fold, Buddy Murphy. Their friendship is no secret to 205 Live viewers, but considering Nese’s opponent in Kalisto, could this be another tag team for the Lucha House Party to sink their teeth into?

The match starts with Kalisto’s gymnastics getting the better of Nese’ strength. Even with a body scissors temporarily grounding the luchador, Kalisto and the loud support of Metalik and Dorado from ringside work in his favor.

Despite the Lucha House Party being the babyface outfit, their constant din and cocky taunting understandably gets under all their opponents’ skin. Buddy Murphy is no different, as he makes his way around the corner to confront the noisemakers. Nese spots the standoff and makes his way outside. With Nese otherwise engaged, he fails to notice Kalisto leap over the ropes directly into him.

As Kalisto rolls Nese into the ring, Murphy takes matters into his own hands, flattening Kalisto. As tempers flare, the referee rings the bell in Kalisto’s favor due to the altercation.

At this point, it’s all but guaranteed that these five men will be involved in a program. This revolving door tag team scene is all well and good. However, I feel that some titles, whether tag-team or six-man, would bolster 205 Live with something else at stake.

Noam Dar is backstage with Drake Maverick, saying he’s been on the lifelines for too long before TJP interrupts them both. TJP bemoans the stunt pulled last week where Dar beat him in thirty seconds. Maverick announces a rematch for next week’s 205 Live.

The screen cuts to a training montage style video of Hideo Itami. Throughout the footage, he directs threats towards Cedric Alexander in both English and Japanese about becoming the next Cruiserweight Champion. 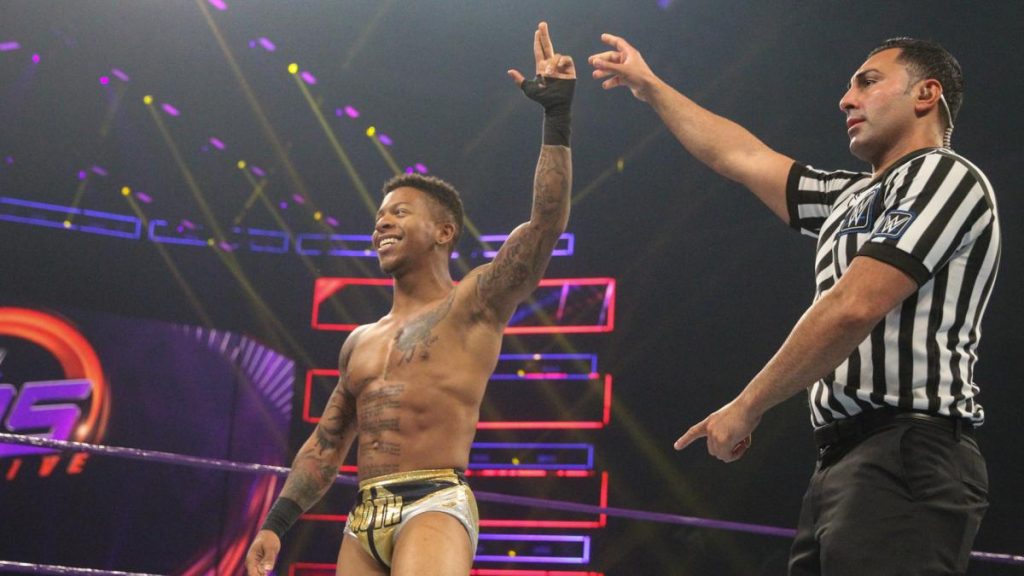 h Rush coming to “show support” for Tozawa last week, Tozawa relays the favor, offering his own support. This doesn’t phase Rush at first, but his proffered chair being kicked to the side by Tozawa catches Rush off guard, as Colin Delaney rolls him up for a near fall.

Rush quickly regains his bearings, dancing around the ring in various and impressively speedy ways. He clocks Delaney with a handspring kick to the face, toppling him off the apron. Rush rolls Delaney back in the ring and takes to the skies for a victory earning frog splash finisher.

Tozawa enters the ring and congratulates Rush on the microphone. He says Rush is good but does he really want to face Tozawa? Rush asks for the microphone, but Tozawa drops it at his feet. The petty display brings out Drake Maverick to police the children, saying that the two will face off against each other on next week’s 205 Live.

After highlights of Mustafa Ali’s victory over Buddy Murphy in last week’s week’s No Disqualification match, Ali is backstage with Cedric Alexander, looking excited for his friend’s title defense against Itami.

Drew Gulak normally doesn’t approve of selfie videos, but he feels this the only way to address the youth of today. He states that now the Lucha scurge has been dealt with, he (along with Jack Gallagher and Brian Kendrick; also in this video) will be keeping a close eye on the outcome of tonight’s main event. If this means that Gulak may be in contention for a Cruiserweight Championship opportunity, then one word comes to mind here: finally! 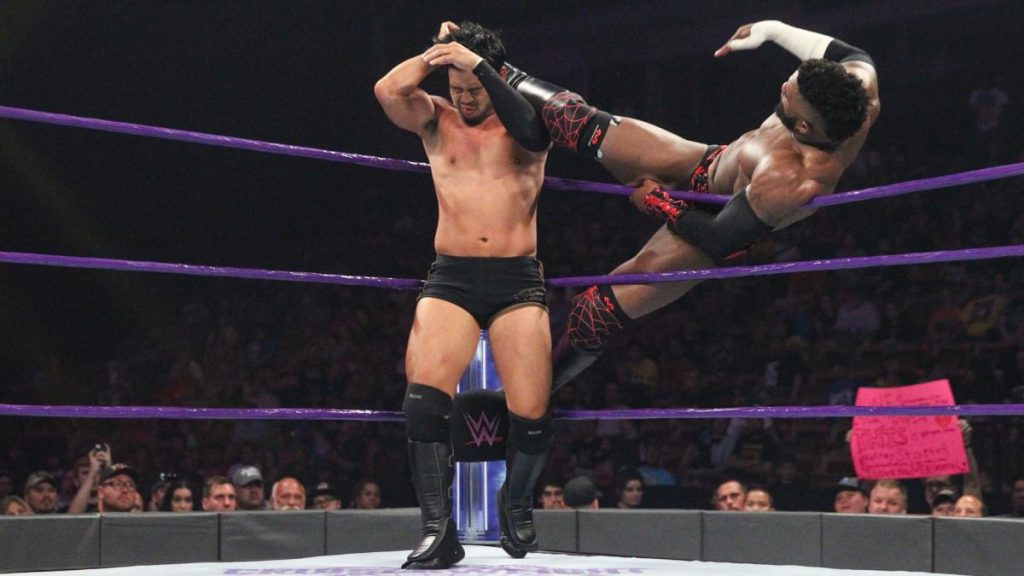 Cedric makes a rare in-ring appearance on 205 Live….. and once the ring announcer gives us the tale of the tape, Alexander and Itami tentatively circle each other before locking up. Itami lashes out with a slap, with Alexander asking if that’s all he’s got.

They engage in some technical wrestling before locking up once more. Itami rocks Alexander with another right hand. This strike finally has Alexander’s back up, who backs Itami into a corner and loo!is to unload with a strike of his own, but Itami slithers out of reach. This is a further exploration of Itami’s hypocrisy; just like his demands for respect but never showing it himself, he backs away from the same underhanded physicality that he so readily serves out when it suits him.

Itami begins a long spell of dominance, raining strikes and kicks down on a rocked Alexander. A series of weak-willed chest chops From Alexander isn’t enough, as a kitchen sink knee by Itami keeps him on top. He wears the champion down with a body scissors and a headlock, but referee Charles Robinson doesn’t get close to three.

Alexander manages a two-count of his own with a surprise school-boy roll up. Alexander finds a way back into the match as Itami ends up in the apron. A forearm knocks him off the apron is followed up with an Alexander somersault over the top rope; momentum now firmly on the champion’s side.

Both men are now tired. A fatigued exchange of blows ends with Ann open-handed slap from Itami, then a fisherman’s suplex, albeit an unsuccessful one as we as ending the match is concerned.

Itami begins to loosen the turnbuckle in the bottom of a corner but is stopped by Alexander. For his troubles, the champion is driven into the steps outside, Itami inflicting pain without a hesitation dropping into the steps. This outrage almost costs the challenger the match, as he barely rolls an almost unconscious Alexander back into the ring to beat the ten-count.

Itami looks to finish off Alexander after a spinning back fist, knocking Alexander into the ropes. Itami lands a knee on Alexander’s head. He attempted another, but Alexander wakes from his slumber and dishes out an almighty Lumbar Check out of nowhere for the win.

This was a great match by Itami, someone who I’ve been hot and cold over for his entire WWE career, but this hyper-violent display may be the thing that has earned my respect; something he has demanded of me and many others for so long.long

Make sure to check out my thoughts on WWE outside of the 205 Live bubble along with my co-host, on Glasgow based podcast, “The Ricky & Clive Wrestling Show”, one of the shows that make up the ever growing Social Suplex Podcast Network. With Extreme Rules 2018 fast approaching, Rance Morris takes Ricky’s seat this week. He and Clive look at the history of the gimmick PPV, as well as the genre of hardcore wrestling in the company in general. What feuds/wrestlers benefited from the violence the most? What are the best subcategory gimmicks? How diluted has it become since the PG Era? All this, and everything in between, with Ricky’s favorite title: the 24/7 Rules Hardcore Title! A hardcore matches themed quiz brings us out. Although this is a themed show, we do touch on the controversial issues surrounding Kenny Omega/NJPW, and Jay Lethal from the past week.