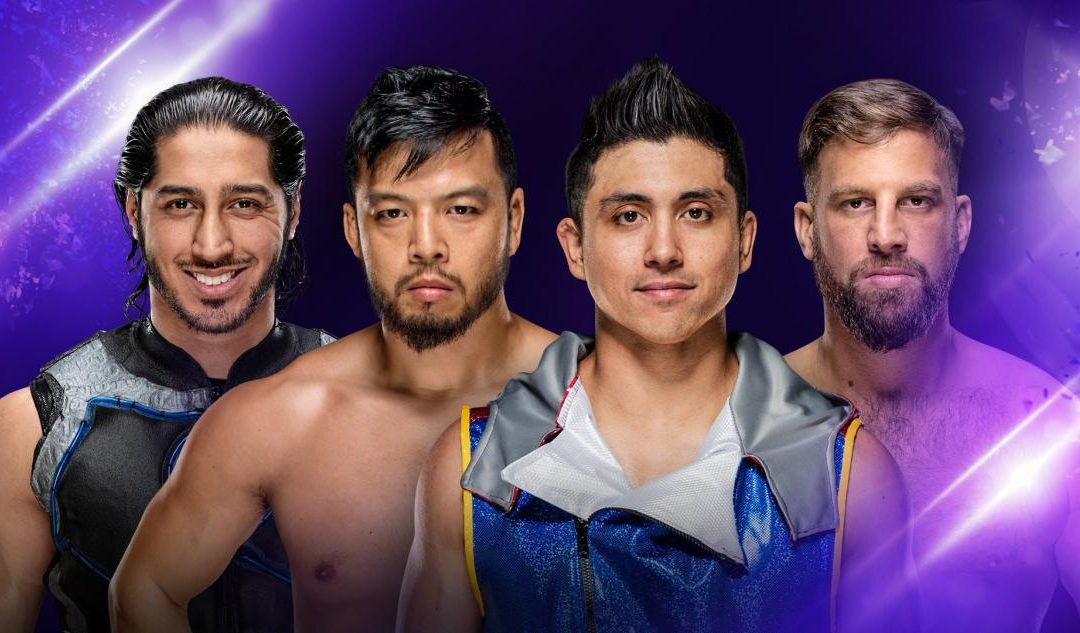 Tonight’s 205 Live starts with the show’s General Manager, Drake Maverick, hyping tonight’s main event Fatal 4-Way match, with the winner out of TJP, Mustafa Ali, Hideo Itami, and Drew Gulak earning a spot against Cedric Alexander for the Cruiserweight Championship. The participants have been picked based on recent performances, as well as their overall body of work. Maverick continues highlighting the aforementioned competitors with accompanying footage of each men’s most impressive moments.

Nigel McGuinness and Percy Watson join Vic Joseph on commentary, as well as Drake Maverick himself, who appears to be joining the team for the duration of the show. 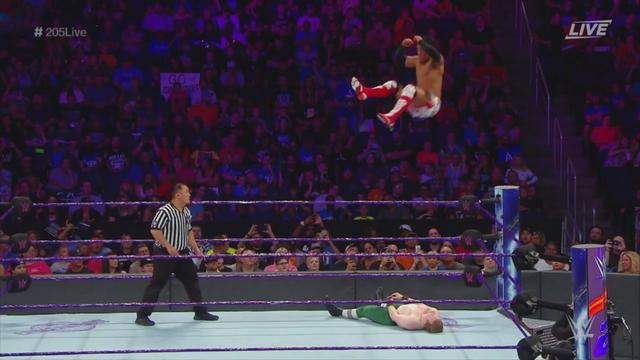 Once Tozawa has entered the ring, Gallagher’s entrance also sees a “selfie” video with him and Brian Kendrick backstage, looking to remind the WWE Universe that, despite his being one half of 205 Live’s most dominant tag team, he too has aspirations of Cruiserweight gold, and wishes to remind everyone that he is an elite singles competitor. This match-up feels very fresh and is a break from the show openers involving the Lucha House Party. After his recent standout performance in the WWE UK Championship Tournament, I am excited to see Gallagher lock up with Tozawa here tonight.

The contrasting styles of Tozawa and Gallagher make for a competitive back and forth; Tozawa’s striking game a frequent answer to Gallagher’s technical prowess. An early jab rocks Gallagher who finds himself on the outside. But Gallagher is merely playing possum, as he traps a sliding Tozawa underneath the apron fabric. This underhanded tactic gifts Gallagher the opportunity to manipulate Tozawa’s body in a variety of wince-inducing submissions back in the ring.

Gallagher focuses on the arms of Tozawa in an attempt to omit those viscous strikes from his arsenal. Tozawa adapts his game, however, reminding Gallagher that he has two other limbs with which he is equally effective. A pair of enziguri kicks leaves a prone Gallagher in the perfect position for Tozawa’s tope rope senton. As is common with this move, Gallagher rolls out of the ring and away from an impending attack. Tozawa wastes no time in keeping momentum on his side, however, as a suicide dive headbutt lays out his opponent.

Tozawa follows up with a missile dropkick and earns himself a near-fall, the strength of which is hindered what with Tozawa’s arms being the focus of Gallagher’s attacks earlier in the match.
An octopus stretch is countered by Gallagher who slams Tozawa to the ground. After another similar throw, Gallagher goes for his own finisher in the form of the running turnbuckle dropkick.
This backfires for Gallagher who, after a precarious scuffle tope the ropes, finds himself in the unfortunate situation of falling to a successful top rope senton bomb. Tozawa covers Gallagher for the victory.

After this impressive outing for Tozawa, he makes his way to the commentary table and demands of Maverick a rematch against Lio Rush, his better in last week’s match. Maverick grants Tozawa his wish by way of an enthusiastic nod.

TJP and Itami are backstage addressing the camera in separate areas about how they will dispose of their opponents in the Fatal 4-Way match. 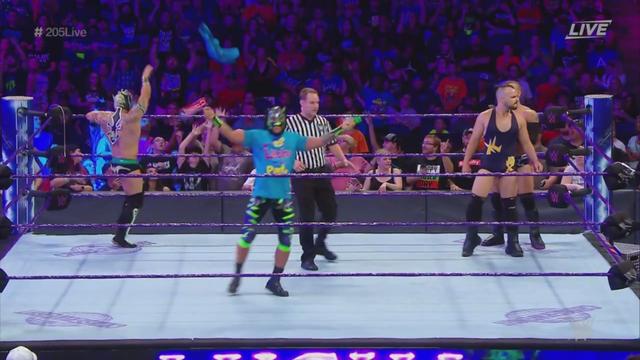 Due to unforeseen circumstances, Tony Nese is not on tonight’s 205 Live and is unable to have his rematch with Kalisto. In the match’s stead, these two-thirds of the Lucha House Party take on Depolo and Robinson. Kalisto mocks Nese in a backstage video for his no-show, claiming Nese is running scared. This is a bit rich from Kalisto, whose stablemate Gran Metalik is also not here tonight due to issues with his visa, according to Vic Joseph. Kalisto’s wrestling style is pleasing to the eye, but sometimes it’s hard to root for this particular luchador with his ill-informed brashness.

Lince Dorado starts the match against Depolo, and the House Party attitude is front and center, as he and Kalisto dance around the ring, almost paying no heed to their opponents. Kalisto tags himself in and the pair enjoys some tandem offense against Depolo. Buddy Murphy is backstage watching the match with a vested interest, what with his recent run-in with the Lucha House Party.

After another tag for Dorado, Robinson comes in to rescue his partner, but Dorado answers with a double springboard stunner, spilling both men to the floor. Robinson, who falls to the outside, eats a somersault from Dorado from over the top rope. Kalisto takes care of Depolo back in the ring with a Solido Del Sol for the one…two…three.

This may have been an unplanned match in the program between the Luchas, and Murphy and Nese, but the quick work that Kalisto and Dorado made of their opponents sends an effective message to their current foes. Hopefully, Nese is able to return to continue the program.

Drew Gulak and Mustafa Ali are backstage, offering their reasons for how they’ll be the one to earn a Cruiserweight Championship opportunity.

Dasha Fuentes interviews Lio Rush backstage about his upcoming rematch against Tozawa. Rush says that he has already beat Tozawa. The self-professed Man of The Hour thinks that Tozawa should keep his name out of his mouth, referencing the request for the match earlier.

TJP vs Mustafa Ali vs Hideo Itami vs Drew Gulak

All four wrestlers make their way to the ring in reverse order of whose videos were played earlier in the show. With that, Gulak and Ali gift the loyal fans of 205 Live with a stare-down before Itami and TJP come down the ramp. Ali and Gulak’s storied rivalry has never ceased to be a fascinating contrast of styles and ideals, and should be interesting to see come to the fore once again tonight.

The participants circle each other in the ring. Gulak and Itami make a beeline for Ali, and with the “Heart of 205 Live” falling victim to his attackers, TJP walks away with his hands on his hips, happy to watch the beat down from a safe distance. Smart tactics from TJP, who looks to save his energy for later in the match.

Ali looks to fight back but is met with strikes from each of his opponents, including TJP, whose lack of input doesn’t please Itami and Gulak. It’s clear that Ali’s opponents consider him the biggest threat, as he is the only target for attack in the early portion of the match. Ali shows why he is the biggest threat, using the tandem of Itami and TJP against them. This is no match for Gulak however, who lays in wait with now what has become a devastating trademark clothesline, with which he turns Ali inside out.

Itami and TJP take a breather as Gulak twists Ali’s neck, then throwing him headfirst back to the mat. The submission specialist looks for a cover, but TJP breaks up the count at two. Gulak, TJP, and Itami discuss tactics on how to eliminate Ali’s danger from the match. Despite some awkward verbal exchanges, they take turns on Ali. The alliance seems to be working so far. That is until TJP opportunistically pins Ali, his sly attempt at victory being broken up by the aghast Gulak and Itami.

The temporary pact breaks down into a shoving contest between the three, which gives Ali time to recuperate to the point that a top rope crossbody can be delivered. The comeback is short-lived, however. After a brief tangle, TJP showcases his own submission prowess by locking Itami and Ali in separate but simultaneous holds. This is broken up by Gulak; the Philadelphia Stretcher possibly jealous of the submission demonstration on show. Gulak and TJP engage in a fast-paced technical throw-down, surprisingly pleasing the vocal 205 Live audience.

Itami attacks Gulak from behind, and Itami and TJP team up to work on Ali again. Ali fights off the buzzards one by one, flooring each of his opposers with his signature offense. This tires Ali however, with all four men painstakingly making their way back to their feet. They are all back on the mat in seconds nevertheless, after a varied array of superkicks levels the playing field once again.

Gulak and Itami face off in the ring. Gulak offers his hand to Itami, proclaiming that he respects him. This turns out to just be a ruse, as Gulak slaps Itami, who strikes back in kind. They begin to battle it out, but fatigue is setting in as their exchange of strikes ends up being on their knees. They make their way to the outside, as TJP and Ali appear back in the ring. Ali shrugs off offense from TJP, who joins Gulak and Itami on the floor. Ali then takes to the sky with a vaulted moonsault off the top rope, felling all of his competition.

Ali rolls TJP back into the ring, who is floored with a Tornado DDT. Ali lands his 054 finisher, but is pulled off during a pin attempt by Itami. The red mist has descended over Itami. A hesitation dropkick into the steps, followed by being thrown like a rag-doll into the adjacent stanchion, is too much punishment for Ali. Before Itami can take advantage of the attack, Gulak throws Itami to the side. He throws Ali back inside, locking in his Gulock dragon sleeper.

Ali doesn’t have enough strength to withstand the submission. Furthermore, he isn’t even able to tap out, as the Gulock renders Ali unconscious. The referee signals for the bell as Gulak is victorious. 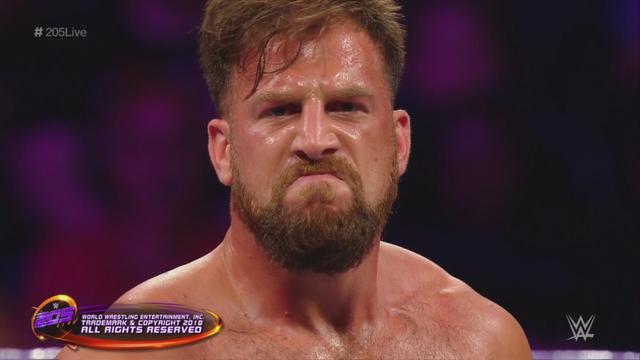 Ladies and gentleman, your winner, and well-deserved #1 contender for the Cruiserweight Championship, Drew Gulak! Off the top of my head, I struggle to think of a better example of meritocracy within a division. Gulak has been one of the top talents on 205 from the very beginning. His featured feud with Cedric Alexander will be a joy to see unfold, and hopefully, it results in Gulak finally delivering his promise of a Better 205 Live!

Check out the latest “Ricky & Clive Wrestling Show“ on the Social Suplex Podcast Network. Clive returns from vacation, but Ricky starts his own! So Rance Morris from Outsider’s Edge comes on to review WWE Extreme Rules 2018. Title changes. Title retentions. The divisive 30 Minute Ironman Match, in which the Pittsburgh crowd let themselves down over a titantron timer… all this and everything in between, with a PPV Anagram quiz closing the show.

Also! Feel free to have a listen to my bonus podcast: a “Quarterly Review” of 205 Live since Wrestlemania, and the Cruiserweight Championship Tournament. Have a look at all of my 205 Live reviews to date.