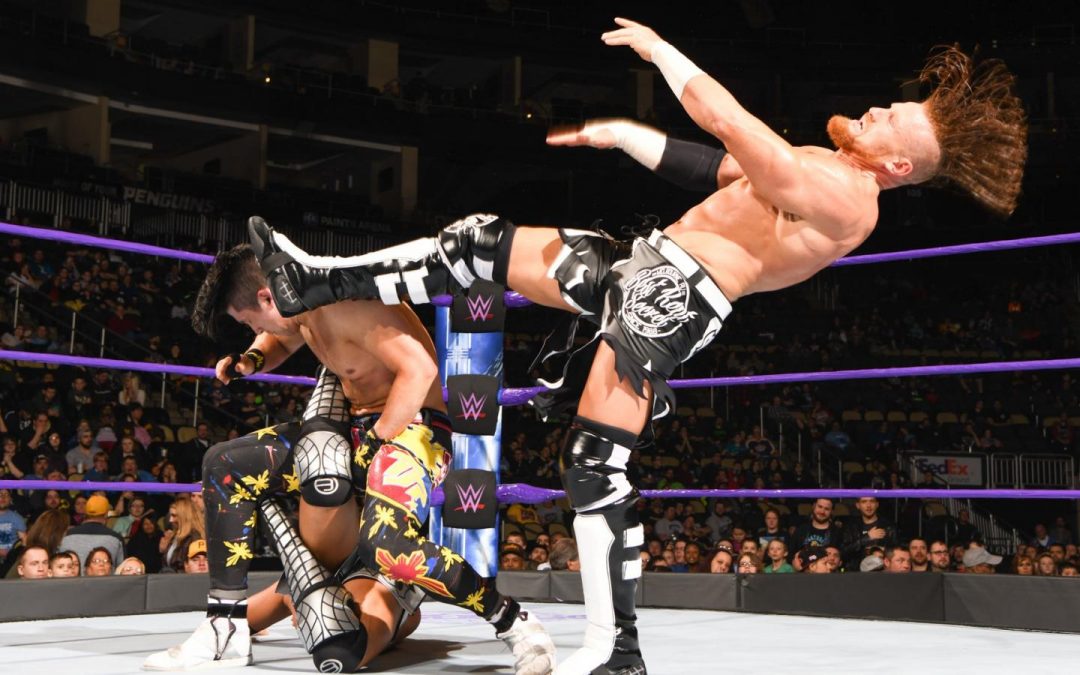 An element of the unknown is in the air for 205 Live fans this week. Barring the Final, all matches for the Cruiserweight Championship Tournament have taken place. Without that plot device to fall back on for the first time in weeks, is the pressure on General Manager, Drake Maverick, to deliver?

Maverick, who joins Vic Joseph and Nigel McGuinness on commentary for the night’s first bout (a match-up between the two men who fell victim to Drew Gulak’s newfound rage in the Tournament’s first two rounds), waves away the Division putting on quality performances for his attention, rather reminding the announce team that the audience is the focus. Maverick states he will consider a rematch against Gulak for tonight’s winner.

The theme that emerges in the match is that of escapology versus power. Tony Nese has Mark Andrews scouted for the majority of the early proceedings with a variety of submission holds and comfortable counters to Andrews’, at times, predictable aerial maneuvers.

Nevertheless, Andrews’ lesser frame allows him to slither out of a number of holds, punctuating the escapes with dropkicks and stomps.

Nese’s strategy runs a close parallel to that of former friend, Gulak, preferring a more grounded and physical affair; an interesting trait considering how sadistically he was treated by Gulak.

Andrews’ innovation returns in the form of a springboard wheelbarrow-bulldog combination, but once the action leaves the ring, Nese responds with a clattering forearm to his plucky opponents’ face.

The ironic similarities between Nese and Gulak continue throughout the match, with Nese’s own attempts at high-flying offense becoming his downfall; a springboard moonsault missing its intended target, allowing Andrews to gain the upper hand.

The near-falls become frantic, both men realizing that it will take something unanticipated for one to beat the other. This occurs when Andrews reverses a modified powerslam from Nese into his patented “Stundog Millionaire”, followed by a Shooting Star Press, and a win for the UK Superstar.

Andrews hobbles over to the applauding General Manager and makes his wishes for a Gulak rematch known. Maverick gladly acquiesces, announcing that the match will go ahead next week.

The camera cuts to Drew Gulak backstage, who has been watching the match with vested interest. He seems to have brushed off last week’s Tournament Semi-Final defeat, stating boldly that he is the best submission specialist in WWE, and that he will have no problem making Andrews tap out.

Following on from snippets of Buddy Murphy and TJP’s pre-match preparations, we have a pre-taped sit-down between Tournament finalists, Mustafa Ali and Cedric Alexander, mediated by Drake Maverick. Alexander and Ali share their excitement regarding their upcoming match at Wrestlemania, a far cry from where they both were twelve months ago. Alexander states he is looking forward to making his family proud when he becomes the Cruiserweight Champion in New Orleans.

Ali interrupts Alexander and suggests a different ending to that story, reminding Alexander that he has squandered Championship opportunities in the past. Ali states the real story ends with him raising the Cruiserweight Title above his own head at the Grandest Stage of Them All. Alexander finishes by vowing to do whatever it takes to become the Cruiserweight Champion, even if it means stomping out the “Heart of 205 Live”.

With more pre-match preparations, this time from Akira Tozawa and Kalisto, the main event is next.

Kalisto vs Akira Tozawa vs TJP vs Buddy Murphy

Kalisto and Tozawa seem to have forgotten their peacemaker roles from last week’s heated tag team match, butting heads quickly and continuing to fight throughout the rest of the main event. As they pair off in their initial tussle, TJP offers Murphy a chance of alliance, but the collusion is just another of Perkin’s tricks, as he clubs Murphy from behind during a suplex attempt.

The selfishness of the former Cruiserweight Champion shines through in the early stages of the match, but so too does his staggeringly impressive submission wrestling. Whilst grounding Tozawa by way of an Indian Death Lock, he simultaneously stretches Kalisto’s abdomen. The Lucha House Party member exchanges fists with TJP, whose bumps to the floor act as a wrench on the still prone Tozawa. The spaghetti junction of legs is broken with TJP’s Northern Lights pin attempt. This was a comedic moment, but shouldn’t take away from the skill, coordination, and trust that each individual has for one another in the ring. A visually stunning set-piece, which isn’t even the last of the night.

Once the action spills out of the ring, Buddy Murphy reasserts his dominance by laying waste to all three competitors, with cameramen, commentary tables, and ring aprons all added to the list of casualties. Shortly after, signature ring exiting dives are executed by three of the four, escalating in extravagance until Murphy lands the final blow with dangerous speed, brought about by his storied weight cutting that has given him an edge so far in his short 205 Live career.

The next set-piece is, frankly, difficult to put into written word effectively. As TJP resorts back to his double submission trick, Murphy escapes but Kalisto remains trapped. As TJP props Kalisto up in the air with a Surf-Board submission, Murphy slides under Kalisto and pins TJP! All the while, like a missile from the sky, down plummets Tozawa with his Senton Bomb finisher, toppling all wrestlers beneath him like a house of cards; a truly breathtaking and highly entertaining highlight of the match.

With the end in sight, the history between Tozawa and Kalisto boils over, and both men once again take their fight elsewhere. A back and forth ensues between Murphy and TJP, whose failed attempts at Inverted Kneebars and Detonation Kicks are answered with the Australian’s finisher, Murphy’s Law, for the three count. Buddy Murphy now holds a Number One Contendership and will face the winner of Wrestlemania’s Cruiserweight Championship match at a later date.

WWE has a skill in assembling chaotic but well synchronized multi-men matches, and tonight is a further example of this. It is another strong episode, even in the absence of any Tournament matches. Come back next week for the final Purple Brand Review before the Cruiserweight Championship Tournament reaches its hotly anticipated climax in New Orleans.

You can read more of my columns right here. Additionally, you can hear my opinions on all things WWE in Glasgow based podcast, “The Ricky & Wrestling Show”, one of the shows that make up the ever growing Social Suplex Podcast Network.