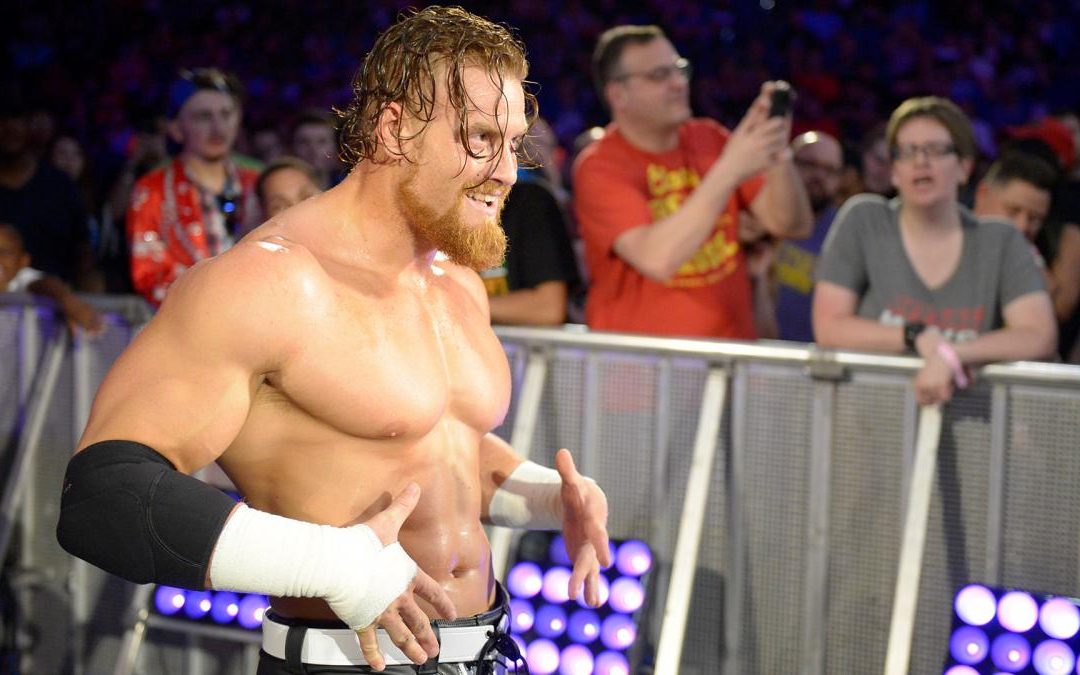 With a new Cruiserweight Champion crowned at Wrestlemania, the show starts with a highlight package encapsulating both the story and Tournament Final match between champion Alexander, and runner-up Mustafa Ali. A celebration for The Soul of 205 Live will take place later in the show.

In another variation of the ongoing war between the Lucha House Party and the Japanese stars, Hideo Itami’s partner, Akira Tozawa, takes on Kalisto. What is notable in this contest is that each wrestler enters the arena without their stablemates.

Kalisto gains the upper hand early on with some low gravity head-scissor takedowns, catching Tozawa off guard. Once the pace quickens, both men rapidly duck each other’s offense until Tozawa takes charge with hard forearms and kicks. After a tussle in the corner, Tozawa finds himself towering over a prone Kalisto with the sudden realization that a senton bomb could bring a quick win, but Kalisto comes to, neutralizing Tozawa with an impressive springboard Spanish fly.

Just like previous encounters, the match breaks down into a striking contest, as the frustration that comes with not being able to gain momentum takes hold. Kalisto escapes another senton bomb attempt, but Kalisto’s frequent escapes bring out a rabid Tozawa, whose caws and cries for the crowd take on a more manic volume. However, his rage is winded, just like Tozawa, after another senton attempt is met with Kalisto’s knees.

An exchange of roll-through pins disorientates Tozawa, who ends up on the receiving end of a Solido Del Sol, granting the Lucha star the victory. As Kalisto’s music plays, the commentary team (Vic Joseph and Percy Watson) inform the TV audience that a Tornado Tag match will take place between the two parties who have become now frenzied in their quest to plant their respective flags atop the mountain.
Winner – Kalisto

Mark Andrews is backstage when Tony Nese comes up to offer support in the Welshman’s pursuit of revenge against the dangerous Drew Gulak.

Next, Gulak is in the ring, teasing the audience with a powerpoint presentation. However, he decides tonight is not the appropriate time as he looks to deal with Andrews instead. He reminds us once again that he is the most dangerous submission specialist in WWE.

Last week, Gulak postponed this match-up so as to ensure he could destroy Andrews at 100%. Early indications suggest that the fully rested UK Superstar is not to be taken lightly, as he wastes no time in locking up with Gulak and showcasing his acrobatic charge, and throwing him under the bottom rope and out of the ring with a deep arm drag.

Andrews’ gymnastics continue, which have a more focused intensity than previous outings, continue to frustrate Gulak. However, Gulak begins to assert his own dominance into the match, as he brings the high flyer crashing down to the apron. From here on in, the Cruiserweight Classic participant brings the match back down to his preferred pace and style, interluding lengthy rest holds with sadistic punts to various parts of Andrews’ body.

Andrews fights back in the latter stages of the match. A stirring standing corkscrew moonsault, and a many rotation crucifix circle pin gift Andrews a last chance at regaining the upper hand. He then reverses a suplex attempt into his patented Stundog Millionaire. He goes for a shooting star press, but hesitates and naively runs into a preying Gulak who throws Andrews head first into the bottom turnbuckle. Gulak wastes no time in bringing the match to an end, applying the Gulock for a quick submission. Despite a valiant effort by Andrews, Gulak is just too much for him.
Winner – Drew Gulack

After the match, the red mist descends over Gulak, who locks in another dragon sleeper. This doesn’t last long, however, as Tony Nese’s music hits, and looks to exert his own revenge on Gulak. Nese clubs Gulak mercilessly. Gulack’s former best friends throws Gulak out of the ring and dives over the top rope himself, taking out Gulak. This is a welcome face turn for Tony Nese and will be an interesting program going forward.

Drake Maverick is backstage and announces to someone off camera that they will be in tag team action next week Those men are Gallagher and his partner, the returning Brian Kendrick, who has been out of action due to a Hideo Itami Go To Sleep which fractured his orbital bone some months ago. Maverick looks for reassurances that Kendrick and Gallagher won’t be looking to return the favor, but Kendrick says what happened with Itami is all water under the bridge.

The last segment of the show is a celebration for the new Cruiserweight Champion, Cedric Alexander, who is welcomed to the ring by Drake Maverick. Alexander discusses how the WWE Universe chanted “Please sign Cedric” two years ago at the Cruiserweight Classic. He then thanks the crowd for their support in his journey to become champion, but is interrupted by Mustafa Ali’s music.

Ali, while cutting a somber figure as he enters the ring, is still able to say that Alexander earned his victory. Ali reminds Alexander that he is still in the line to have another chance at winning the purple belt. Before Ali can continue, Buddy Murphy’s music plays. The Australian rushes the ring from the crowd and lays out Alexander with a Murphy’s Law. The show closes with an angry Maverick reprimanding Murphy, who smugly makes his way up the aisle.