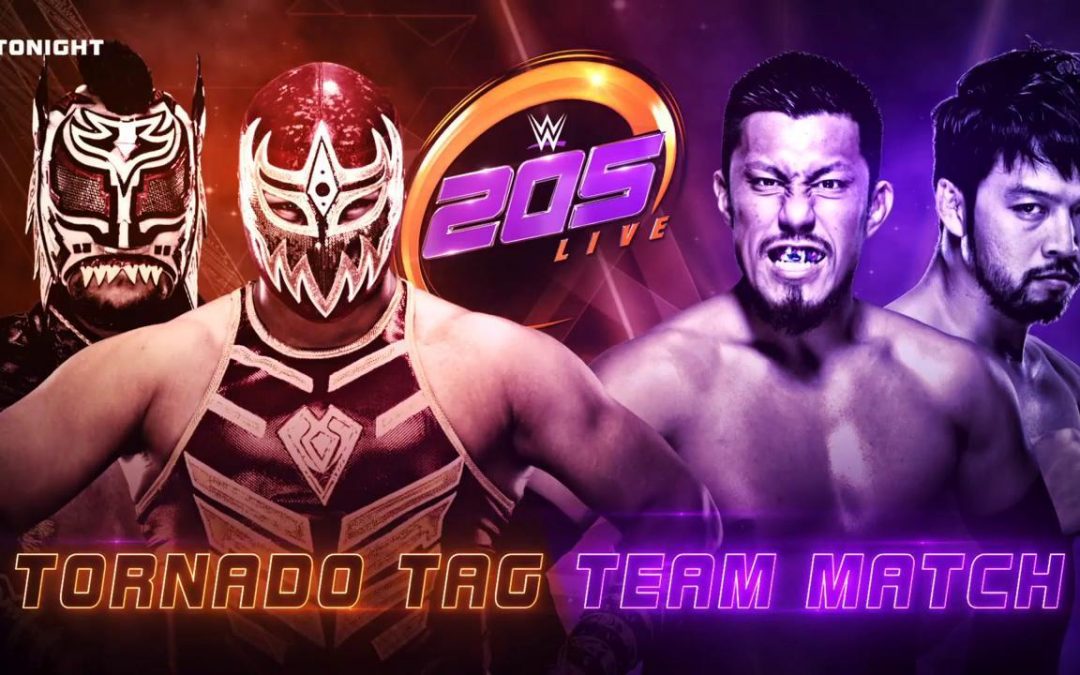 This week’s episode starts with a video package breaking down the rivalry to date between the Lucha House Party, and Hideo Itami & Akira Tozawa. The animosity between these teams has intensified to the point where 205 Live’s General Manager, Drake Maverick, has booked a Tornado Tag Team match for the main event. After many weeks of no contests, and members of each team swapping victories with one another, the assumption is that matters will be settled once and for all.

Mustafa Ali makes his way to the ring in his Wrestlemania entrance attire. His music cuts to a backstage segment, where Ariya Daivari explains to Dasha Fuentes that Ali blew his chance to become Cruiserweight Champion, and should be made to go to the back of the line before he is even considered for another opportunity.

Once underway, the theme of this match quickly becomes apparent. Daivari, in keeping with his earlier statement, is relentless in his mission to punish Ali for his failings at Wrestlemania. He aggressively comes out the gate with heavy punches and kicks, inflicting initial damage upon his opponent as quickly as possible. Ali tries to battle back, but this proves futile. Daivari smartly targets the legs and lower back, knowing that negating Ali’s ability to take to the skies – where he is most at home – is one of the few ways that an advantage can be gained.

The action spills out of the ring, and Daivari continues his grueling focus on Ali’s lower back with a spinebuster onto the floor. Davairi drags Ali back into the ring and looks to put the final nail in the coffin with a frog splash. However, Ali begins to show signs of life as he kicks out at two.

Ali’s trademark resilience begins to manifest, as he escapes Daivari’s Hammerlock Lariat. But the audience has to wait for the spirited comeback to take hold, as Daivari once again gains the upper hand and pins for another close two-count. The exertion alone of escaping pin attempts adds to Ali’s exhaustion and is another shrewd move from the Iranian-American.

Daivari’s obsession with punishment takes over from his intelligence, however, as he attempts a top rope back superplex. This is countered by Ali, reminding everyone that there is room for only one person in the match whose aerial offense will have any impact. As is synonymous with Ali at this point, his message of standing up to adversity in all walks of life transfers into the ring. After his patented “054”, Ali pins Daivari for the victory.

Despite the loss, this was an impressive performance from Daivari who, for me, failed to impress in the Cruiserweight Championship Tournament. Perhaps his early exit has brought on a bitterness with those higher up the pecking order of 205 Live, and as a result, we could see a more clinical and driven Daivari.

We see a replay of last week’s segment with Buddy Murphy attacking Cruiserweight Champion Cedric Alexander from behind. Drake Maverick comes on screen and addresses Murphy’s behavior. Even with Murphy’s actions, his form of late still merits a title opportunity at the upcoming Greatest Royal Rumble. Unfortunately for the number one contender, however, this will have to be postponed as the “Best Kept Secret” recently failed to meet the 205lbs weight restriction. As a result, Murphy cannot currently compete as a cruiserweight, and a number one contender for the match in Saudi Arabia will be determined by way of a Gauntlet Match on next week’s 205 Live.

*Note to reader – the names and spellings of Gallagher and Kendricks’ opponents may not be accurate, however, this is not through lack of trying to accomplish said accuracy. WWE’s own website did not give their names, merely referring to them as “local competitors”. My apologies go to the wrestlers if their ring names aren’t correct.

Jack Gallagher enters the ring with The Brian Kendrick, who is returning from an orbital bone injury suffered at the hands of Hideo Itami on Christmas day last year.

Gallagher starts off the bout with a lock-up and wastes no time in tying Salisk up in knots, then shares the punishment with his tag partner, who comes in to take over. Kendrick continues to torture Salisk with similar holds that only a contortionist could endure.

After barely escaping Kendrick’s greedy clutches, Dateebris reluctantly enters the match. This doesn’t change Kendrick’s mindset however, whose time away from the ring has left him impatient to impose pain and suffering on others.

Kendrick and Gallagher finally put the young wrestlers out of their misery and bring the match to a swift but brutal close. Kendrick’s Captain Hook to Dateebris (who can’t be rescued by Salisk due to a nasty Gallagher headbutt), earns the unrepentant duo an easy victory.

Backstage again, and Mustafa Ali is speaking to Dasha Fuentes of his hopes for Buddy Murphy to cut weight and return to 205 Live so that his friend, Cedric, can get revenge for last week’s sneak attack. Ali goes on to say he won’t waste his chance at the Cruiserweight title again and vows to win next week’s Gauntlet match.

Drew Gulak addresses the WWE Universe, explaining how his vision for a better 205 Live was displayed last week when his ground-based wrestling put an end to high flying Mark Andrews’ “silly” quest for retribution. He states that this should be a lesson to his old friend, Tony Nese, who has a similar quest. Gulak questions why Nese deserves a rematch, stating that he doesn’t have time to deal with Nese and that his focus is on next week’s Gauntlet match. However, if Nese happens to get in his way, Gulak will make sure that he taps out.

As Lucha House Party’s entrance plays, Vic Joseph and Percy Watson are joined by Drake Maverick on commentary. The General Manager applauds the efforts of all involved in helping crown a new Cruiserweight Champion at Wrestlemania, and when pressed, teases that any details regarding the Gauntlet match will come in good time.

It is also noted that Kalisto will not be involved in this match, as Maverick wants this to be a just outcome that put an end to their bitter rivalry.

The Japanese tag team doesn’t even have the chance to make their way to the ring before Metalik and Dorado rush them. Being caught off guard gives the Lucha stars an early upper hand. Once again, the Lucha House Party’s cockiness should not be taken lightly, as their fiery determination confirms they are more than ready to get the job done.

The bell rings, and Dorado and Metalik continue their advantage, teaming up on both Itami and Tozawa in separate corners, who are rocked by the early assault. They then manage to shake off the cobwebs, with Itami rescuing Tozawa from a ringside attack. Tozawa himself then retaliates with a springboard senton off the apron, felling all remaining competitors.

Tozawa and Itami lock on submissions to Dorado and Metalik. A surprise victory looks to be in sight, as the submissions are locked on tight and far away from the help of a rope break. But Tozawa’s octopus stretch is stopped as his and Metalik’s combined weight forces a fall from The King of The Ropes.

Itami shows his disrespectful side again – a common theme throughout this rivalry – and tries to rip Dorado’s mask off. The attempt fails, but it doesn’t stop Tozawa and Itami pouncing on Dorado, like wolves circling their prey. Metalik tries to rescue his partner, but Itami stops any advances, and the Japanese stars continue their attack on The Golden Lynx.

Itami repeatedly tries to rip off Dorado’s mask, but Metalik recovers with a sense of real urgency, his rope game more frantic and impactful than usual, his wild foray buying Dorado some time to recover.

With the Luchas now having the upper hand, they set Itami and Tozawa up for stereo springboard moonsaults mere feet away from the commentary table.

The table, along with steps, becomes prominent features for a spell as tempers flare. Tozawa looks to end Metalik in style with a Senton Bomb from turnbuckle to table. Dorado saves his partner, however, by spilling Tozawa onto the ropes. After a tired scuffle, this sequence ends with Itami and Tozawa attempting to superplex Dorado. But Metalik does them one better. A sunset flip powerbomb to his opponents (which brings his tag partner into the crosshairs also) results in a Tower of Doom, and the high spot of the evening.

An exhausted looking slugfest continues between Tozawa and Dorado. Tozawa heads to the top and finally delivers his Senton Bomb finisher. The pin is broken with Metalik’s two-footed stomp onto Tozawa’s back. Itami suffers a similar fate upon a pin attempt on Metalik, receiving a low dropkick from Dorado.

The match is close to a frantic and ill-tempered end. Dorado delivers an impressive “Springboard Stunner” to both his opponents. Shortly after however, Itami aims sickening backfists at Dorado. Again, Itami desperately tries to gain a trophy in this war in the form of a mask. But the passion proves too much for Itami and Tozawa, the latter accidentally kicking the former. With both men down, Dorado and Metalik take to the ropes and impress in a final flourish with their signature top rope moves. This earns them a hard-fought victory with them pinning their respective opponents simultaneously. Kalisto makes his way to the ring to celebrate with his stablemates.

The Lucha House Party celebrate as 205 Live goes off the air. Next week will see a gauntlet match to determine the number one contender to take on Cedric Alexander at Greatest Royal Rumble. It goes without saying that it will be hard to top Monday Night Raw’s Gauntlet match from two months ago, both in terms of storytelling and match quality, but I have high hopes that 205 Live will continue their excellent form next week.