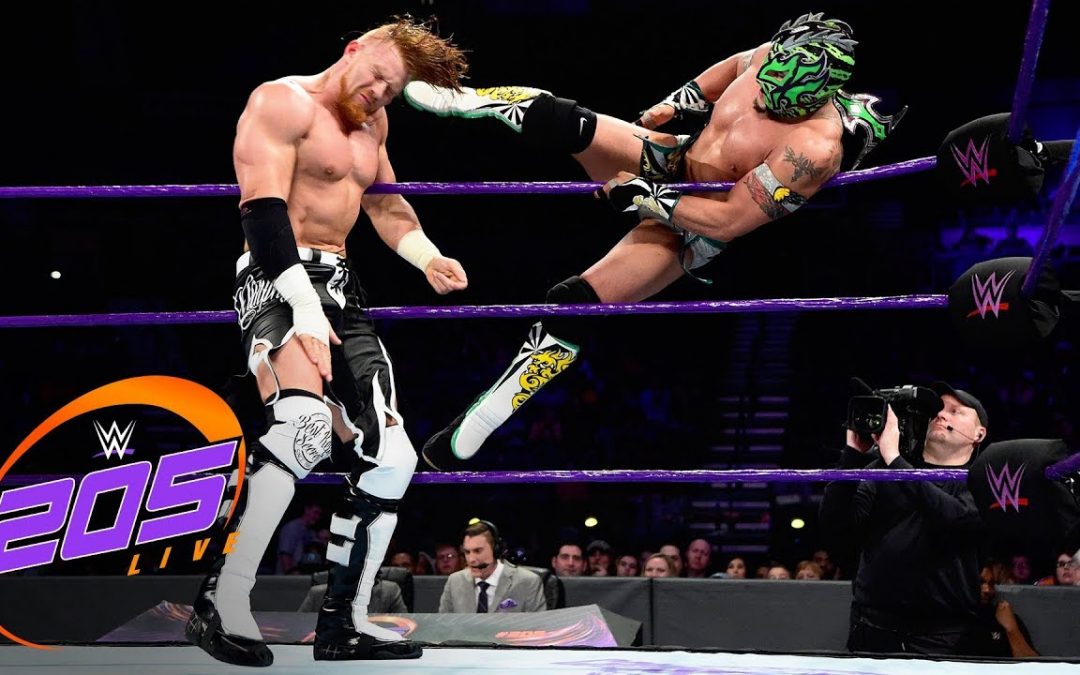 With a climax to the Cruiserweight Classic Tournament fast approaching, this week’s introductory video package reminds the WWE audience that there is more to sink your teeth into on 205 Live than just the upcoming Wrestlemania match between Cedric Alexander and Mustafa Ali. The ongoing war between Lucha House Party, Hideo Itami and Akira Tozawa rages on in tag team action between the Japanese strikers, and Lince Dorado and Gran Metalik. Additionally, Buddy Murphy’s branding as 205 Live’s “Best Kept Secret” is fast becoming the opposite, as he looks to prove his victory last week wasn’t a fluke in this episode’s main event match versus Kalisto.

Itami and Tozawa make their way to the ring with a clear sense of purpose, ready for a fight. In contrast, Dorado and Metalik almost swagger down the aisle; a sign that their reputation as a prominent force on 205 Live is, as far as they’re concerned, well deserved.

Although Itami and Metalik start the match, Itami’s frequent and threatening glares towards Dorado in the corner show his true intentions. The two throw daggers at each other throughout the match, and when physical interaction occurs, the strikes are vicious and primal.

As the tags come thick and fast, both teams have each other well scouted. Tandem offense is resorted to, as the men’s signature moves are regularly halted. The pleasing aesthetics of cruiserweight wrestling take second place to cheap shots and ugly strikes being thrown. However the high flying action takes the lead again, with Itami on the receiving end of a trademark, over the top rope dive. The sequence continues with Tozawa’s diving missile headbutt, and reaches a flourish with Metalik’s Corkscrew Plancha taking out all the competitors.

Once the action returns to the ring, Itami takes the rivalry to the next level. The Japanese star, who regularly demands respect, shows the ultimate sign of disrespect to a Lucha wrestler, and attempts to savagely rip off Metalik’s mask. This garners an obvious response of outrage from Dorado. The match quickly breaks down into a nasty scrap, to the point where the referee signals for the bell to be rung.

Itami takes matters into his own hands, targeting Dorado’s knee, and Tozawa lays into Metalik. Itami and Tozawa beat down upon the prone Lucha House Party members, and smugly make their way to the back, stealing the swagger that Dorado and Metalik entered the arena with initially.


Drew Gulak is backstage. He informs the audience that he requested his match with Mark Andrews (originally scheduled for this week) be delayed by another seven days. Gulak makes it clear that he wants Andrews operating at 100%. so that there can be no excuses when he annihilates Andrews with the “Gulock”. Andrews replies with a pre-taped video, saying this isn’t about pitting high flying wrestling against Gulak’s more mat based vision. Andrews just wants revenge, and will seek this next week.

The Premier Athlete makes his way to the ring to take on “local talent”, Jonathan Pierce, as a segment is airs showing Drake Maverick give Tony Nese a pep-talk, asking him to unearth his untapped potential.

As the match starts, Jonathan Pierce mocks Tony Nese by flexing his own muscles, but Nese reminds Pierce who’s boss with some early hard hitting blows. Pierce answers in kind with disrespectful slaps to Nese’s face.

Not long in to the short match, Pierce decides he wants nothing to do with Nese, and makes his way up the aisle. Nese however has other plans, chasing Pierce down and delivering a brutal forearm to his jaw.

The methodical and clinical Nese throws Pierce into the ring. He ends proceedings, this time on his own terms, with a springboard moonsault, and finally dragging Pierce into the corner for The Flying Nese, rewarding The Premier Athlete the victory.

Backstage, Kalisto checks on the wellbeing of his stablemates who are being treated for injuries sustained in their earlier match. Buddy Murphy comes in to express sympathy for Kalisto’s partners, and says he will “go easy” on Kalisto in their match, which is up next.

After an initial flurry of flightful displays by both men, the early parts of the match are a methodical affair with mat oriented wrist locks and arm drags. Any attempts at Lucha style wrestling are countered by Murphy. This show of keeping pace with the supposedly faster cruiserweights in his short time on 205 Live isn’t the first time that Murphy has informed viewers that he can hang with the best of them.

Despite his agility, Murphy has retained the strength he held when heavier than the Division’s weight restriction. This becomes more clear when, after some well placed stomps to Kalisto’s face, Murphy takes his smaller opponent out to the apron and whips out a devastating running suplex, crashing Kalisto’s (and his own) body onto the unforgiving structure.

The back and forth between Murphy and Kalisto becomes laboured, with Kalisto digging down deep to deliver a spinning heel kick on pure instinct alone. However the Lucha Dragon’s attempt to gain momentum ends with a reverse-rana being countered into a messy electric chair drop by the Australian.

After an impressive monkey flip of Kalisto onto the commentary table, then a very long two-count from a knee to Kalisto’s face, Murphy’s look of exhausted shock brings the sequence to an end, garnering a chorus of exuberant chants and adoration from the vocal crowd.

The audience then rise to their feet for a standing ovation. Nothing is at stake in this match. No title matches. No qualifiers. All that is on the line is the pride and reputations of the wrestlers involved. The ovation may be in support of the match itself, but this could also serve as a thank you from the fans for the hard work of all involved in 205 Live from late January onwards.

In the final stages of the match, a scrappy scuffle ensues. Kalisto’s struggles to escape Murphy’s Law are in vain, with the Australian locking in his finisher. It might be an ugly ending, but is reminiscent of the spirited encounter. Murphy may be the victor, but Kalisto leaves looking strong also, in one of his best ever WWE performances.

The last two small segments of this week’s episode are, in essence, a call to arms. Drake Maverick delivers an emotional and impassioned plea to the WWE Universe. In a hark back to the opening gambit in his first ever 205 Live appearance, Maverick asks that the Cruiserweight Division is taken seriously, and that the Tournament Final match could very well be fans’ “Wrestlemania Moment”.

With that match in mind, we see a video package showcasing Cedric Alexander and Mustafa Ali’s gruelling journeys through the Cruiserweight Championship Tournament. Both men aim to deliver a match worthy of the occasion. Alexander’s vow has a more intense tone to it, while Ali promises to give his heart to the watching world.

All eyes are now on the Tournament Final at The Show off Shows. However, despite a lack in development of Alexander vs Ali, this episode still delivered. It focused mainly on the now well fleshed out storylines that will continue to keep 205 Live at the high quality it has shown these past months.

What did you think of 205 Live this week?  Feel free to drop your comments here or wherever you read this on social media. You can find me on Twitter , and in Social Suplex’s Facebook group. You can read more of my columns right here.

Additionally, you can hear my opinions on all things WWE in Glasgow based podcast, “The Ricky & Wrestling Show” (below) one of the shows that make up the ever growing Social Suplex Podcast Network.