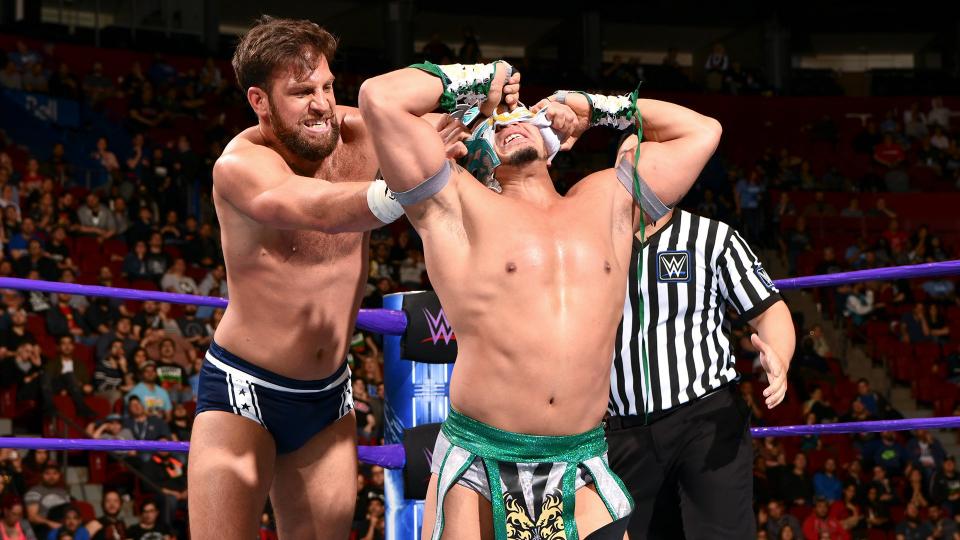 This week’s show begins with a highlight video of Cedric Alexander’s successful Cruiserweight Championship defense over Kalisto at the Greatest Royal Rumble in Saudi Arabia.

Vic Joseph is joined by Percy Watson and Nigel McGuinness, who informs viewers that Buddy Murphy has returned to 205 Live’s mandatory weight requirement, and will return to in-ring action tonight. We will also see Kalisto vs Drew Gulak, a rematch of sorts between the final entrants from last week’s gauntlet match, in the main event

On the surface, Hideo Itami and Akira Tozawa seem to have put the defeat to Gran Metalik and Lince Dorado behind them, as they look geared up for tonight’s encounter with Brian Kendrick and Jack Gallagher. The showing of solidarity between the team is a welcome sight, considering a lack of communication resulted in their loss two weeks.

It should be noted that this is the first interaction between Itami and Kendrick since the former fractured the latter’s orbital bone late last year. Although we are reminded of this in commentary, Itami and Kendrick need no prompting. Despite Kendrick previously claiming to hold no ill will against Itami, the two immediately aim heavy forearms and punches at each other’s faces once they square off early on in the match.

Itami eventually gains the advantage by grounding Kendrick with a dragon screw. He and Tozawa take control with tandem moves, but upon realizing his tag partner is in danger, Jack Gallagher realigns the balance with illicit interference from outside. The Englishmen then tips the scales in his team’s favor by crashing Tozawa into the fan barrier with a Russian leg sweep.

Both teams frequently tag each other in, keeping all men fresh enough to maintain the intensity of what is a very “strong style” contest. However, Tozawa slows things down by locking Kendrick in a modified octopus stretch. Gallagher comes to his partner’s rescue, and he and Kendrick look to try a tandem move of their own, which unfortunately comes to nothing for the pair.

As the action returns to a frantic pace, Gallagher and Itami run the ropes. Gallagher ducks a Itami clothesline, and upon rebounding off the opposite set of ropes, his impact upends Tozawa who was standing on the turnbuckle. With Kendrick taking care of the distracted Itami, Gallagher floors Tozawa with a head-butt for the victory.

Once left in the ring alone, Itami blames Tozawa for the loss, despite Tozawa being the one who suffered from Itami’s mistake. Regardless, Itami slaps away Tozawa’s proffered handshake of consolation, and leaves on his own, leaving a bemused Tozawa in the ring.

After a short video showing Buddy Murphy’s sneak attack on Cedric Alexander three weeks ago, Drew Gulak is backstage lacing up his boots. Gulak turns to the camera and states that Kalisto barely squeaked by in last week’s gauntlet match, and he is not surprised that Kalisto lost his title match in Saudi Arabia. Gulak says that in his vision for a Better 205 Live, he will be dominant and that Kalisto will tap out.

A pensive Buddy Murphy makes his way to the ring, with his entrance interrupted by a video showing his successful weigh-in, and return to 205 Live competition. Drake Maverick offers a welcome by way of a handshake, but Murphy ignores this and walks away.

This match is essentially over before it starts. Buddy Murphy takes out his frustrations on Liam Louis. Murphy is clearly not in the mood to be dealing with someone who he feels is lower down the totem pole than him, as he nonchalantly kicks the back of Louis’ head, and throws him around the ring like with discontent. When Louis retaliates with a strike of his own, this lights a fire in Murphy’s belly. He grabs Louis and punishes him with a series of powerbombs. Despite a failed pin attempt due to Louis’ shoulder being off the mat, the referee brings proceedings to a close, as Murphy’s opponent is in no fit state to compete any further.

As Murphy makes his way up the ramp, Cruiserweight Champion Cedric Alexander comes out from the back and instantly locks horns with the Australian. Fists are thrown between the two with a vicious temper. Murphy quickly escapes and heads backstage.

Cedric is interviewed by Dasha Fuentes shortly after, saying that he was making a similar statement to Murphy’s from three weeks ago. The difference between the statements, however, was that Alexander’s was face to face. He challenges Murphy by saying that if he wants a title opportunity, he knows where to find him.

The theme of this match is evident from the outset. Kalisto’s trademark flips and twists are initially no match for Gulak’s ground and pound style. Even with Gulak’s disrespectful slaps to the back of Kalisto’s head, this isn’t enough to conjure up enough gumption from the Latino star, as his athletic escape attempts are repeatedly countered with more innovative yet grueling submissions. It comes across as if the Philadelphia Stretcher’s inspection and manipulation of Kalisto’s weak points are treated like a twisted science experiment.

Gulak is once again one step ahead of Kalisto, as he negates Kalisto’s aerial offense by dodging a high-flying move, once again negating aerial offense. However as Gulak begins to transfer from a grappling style into a smash-mouth strategy, the fiery Kalisto finds himself on a level playing field, as he begins to build momentum. Unfortunately, a corkscrew splash over the rope to the floor is well scouted by Gulak, who dodges the attack with inches to spare, which sees Kalisto land awkwardly on his knee.

Gulak takes full advantage of this, stretching Kalisto to the breaking point. There is no wasted motion in Gulak’s performance so far. Kalisto’s only chance for respite comes in the form of successfully grabbing the bottom rope after a particularly contorted Boston crab.

Gulak seeks to punish Kalisto for this, launching him into the turnbuckles and peppering him with clotheslines and punches. Gulak tries to rip off Kalisto’s mask. This could be a personal statement from Gulak, but what with his vision for a Better 205 Live, this could also be an attack on lucha wrestling itself, the ideals of which Gulak is so vehemently against.

This fires up Kalisto for a spirited comeback. Kalisto seems to increase the frequency at which he wrestles his preferred style, as the array of visually impressive takedowns exponentially improves.

This increase in pace results in a frenetic exchange of roll-throughs and pin attempts. As the match reaches its climax, Gulak reverses a top rope assisted Solido Del Sol into his dragon sleeper finisher, the Gulock, for the win.

Kalisto is in considerable pain as Gran Metalik and Lince Dorado come down to check on their fellow Lucha House Party member, as a victorious Gulak makes his way up the ramp, delivering a clear message to anyone who doesn’t comply with his vision.

Next week’s matches include The Brian Kendrick & Jack Gallagher vs Gran Metalik & Lince Dorado and a rematch of the Cruiserweight Championship Tournament bout between Mustafa Ali and Buddy Murphy.