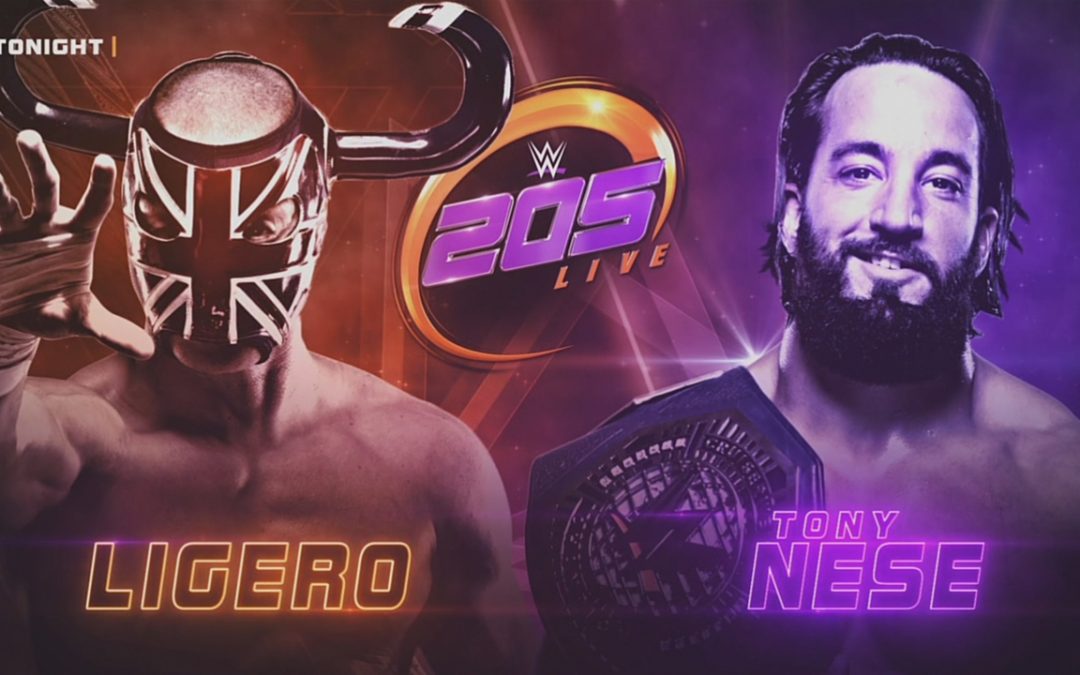 With WWE in Europe for their traditional springtime tour, 205 Love welcomes NXT UK onto the show! The Leodensian Luchador, Ligero, will take on Cruiserweight Champion, Tony Nese in a non-title match.

First off, however, James Drake and Mark Andrews of NXT UK are involved in Fatal 4-Way action with 205 Live regulars, Humberto Carillo and Gentlemanly Jack Gallagher.

With Vic Joseph on the other side of the European tour, Byron Saxton joins Nigel McGuinness and Aiden English on commentary this week.

James Drake has become one of my favourite performers on NXT UK. He may be quiet. He may be unassuming. The truth is, though, that the Grizzled Young Veterans wouldn’t be the NXT UK Tag Team Champions they are today if it wasn’t for him. That experience comes to the fore from the off in this match, as Drake slides out to the floor at the ring of the bell. The other three competitors have at it in a whirlwind of quick cover attempts.

Drake looks to take advantage with a pin of his own, but the rest are having none of it. Andrews draws first blood, taking it to Drake. Carillo and Gallagher use their affiliation with one another to their advantage as they double team Andrews, an assisted arm drag the end result. Once outside, Drake dumps Andrews unceremoniously onto the apron, face first.

The NXT UK Tag Champ is in control. Grinding Carillo in the corner. Throwing punches at the incoming Gallagher on the apron. Snap suplexing Carillo, returning to the ring, then applying pressure with a headlock. Drake is keeping both Carillo and Gallagher at bay to great effect. A very impressive start to the match; it’s hard to look truly dominant in a multi-man affair.

Carillo feigns some luchador offense, fooling Drake in the process. An enzuguri finally lands, spilling Drake outside. Carillo follows up with a Fosbury flop over the top rope. Andrews capitalises from the ruckus, launching off the steel steps and flooring Carillo with a hurricanrana. Drake asserts himself, looking to wipe Andrews out, but a massive tornado DDT from Andrews spikes Drake’s head onto the mat. This match is rather difficult to keep up with, I have to say!

With the other three crawling around the floor, Gallagher brings an old friend back to WWE. His umbrella, a.k.a William III, comes to Gallagher’s aid. Well, not really. But it is a very fun reminder to see something that made Gallagher such a joy to watch in his early babyface days.

Carillo and Drake are still on the outside. Gallagher hoists Andrews up for a long….long stalling suplex. The crowd warm-up for the eventual fall, and they lap it up for their compatriot as the suplex lands.

The following sequence is a delight to watch. Gallagher on the top rope. Drake follows, possibly with a superplex in mind. Andrews leaps up, taking Drake out with a huge super reverse rana. Gallagher imminently follows with a diving reverse headbutt, while Carillo finishes the showcase with a twisting frog splash from the top. On the surface, this may seem like a spot fest. But Drake’s dominance is a concern for the rest of the field. They had to give it their all in order to negate any further threat from Drake. Wonderful stuff.

Carillo goes for the pin, naturally, but Gallagher and Andrews break it up. The London crowd give applause to all involved. Once again, ladies and gentlemen, a 205 Live multi-man match delivers!

With Drake out of the equation, Carillo, Gallagher, and Andrews swap chops and strikes. Andres gains the upper hand with a spirited comeback. He is stopped in his tracks, however, with a massive headbutt from Gallagher. Gallagher is stunned and is rolled up by Carillo for a school boy. The referee counts to three, and Carillo is the victor!

A very fun match, tonight. The dynamic between Carillo and Gallagher was very interesting, considering the storied path they have traveled of late. Carillo offers a hand of consolation, but Gallagher sulks and walks off. Hats off to Drake in this match. Excellent on his own and in a team!

Ariya Daivari is addressing the WWE Universe from a sunbed. He laughs at Tony Nese traveling the world, wearing himself out with only days to go before their Cruiserweight Championship match at Money In the Bank, while he gets his chill on. Erm….okay, Daivari!

Tony Nese is up next. Sarah Schreiber asks him if wrestling Ligero with only days to go until Money In the Bank is a good idea. Nese replies by saying that 205 Live deserves more from its Cruiserweight Champion. Nese didn’t become champion by taking it easy, and he doesn’t intend on starting to do that now. We have a Ligero hype video up next, showcasing the NXT UK Superstar for those unfamiliar with him.

The Lucha House Party confirm via a selfie video that they accept the Singh Brothers’ match request. Lince Dorado and Gran Metalik will take on the Singhs next week.

Ligero proffers a handshake as a sign of sportsmanship. Nese returns it in kind but wastes no time in taking it to Ligero. Complex arm holds follow between the two. They then separate, allowing the match to kick into second gear. After an extended series of roll through pinfall counters, the handshake of respect is shown again. Ligero thanks the referee also for his hard work during the exchange. Nese shakes the ref’s hand as well. It all gets very amicable. Strange, but nice to see!

Constant motion is the theme of this match. Ligero is not giving Nese any chance of respite as he applies several wrestling styles to his gameplan, keeping Nese on his toes. He decides to bring a chest chopping game to proceedings. Nese is on the back foot. The Cruiserweight Champion dodges more incoming offense, delivering his own trademark Matrix dive, superkick, and gut kick combination. After a quick flurry of offense in favour of Ligero on the outside, Nese slows things down with a rear scissor lock back in the ring.

Ligero breaks free. He brings up a boot, hoping to ward off an incoming Nese, but the Premier Athlete is too focused these days to fall victim to simple tactics. Nese returns to the rear scissor lock. Ligero’s core is now comprised, as could be his high flying ability as a result.

Ligero leans back, pinning Nese. Nese powers up, submission still applied. Ligero is up the proverbial creek without a paddle. Nese breaks the hold himself, looking for a tilt-a-whirl slam, but Ligero counters, landing on Nese’s face. Ligero floors Nese with an inverted Attitude Adjustment of sorts then follows up with a stiff kick to the head. Ligero is in control now, but Nese’s explosive counters offer him an into the match, once again.

Nese is cutting a frustrated figure. We’ve seen in the past how that can be to his detriment. Ligero is able to dodge or counter a number of attacks from Nese. At this stage, an upset is on the cards. Nese is booted to the outside. Ligero follows with a somersault over the top rope.

Ligero climbs to the top rope with Nese in the middle of the ring. Nese storms over, palm striking Ligero hard. A hurricanrana from Nese, but the resultant pinfall only reaches two. Nese tries again, this time with a massive 450 splash. Again, Ligero kicks out at two. Nese’s face is a picture of despair. What else can he do?

Ligero reverses a German suplex attempt, earning a sneak pin attempt. Nese kicks out, but Ligero hits Nese with a kick. Another exchange of pinfall attempts follow, but Nese ends the demonstration with a single-handed powerbomb into the corner. This sets Nese up nicely for the Running Nese. He hits it without any difficulty, bringing the potential shock upset to its knees.

A spirited challenge by Ligero, but a more spirited defense by Nese. Nese asks the crowd to show their appreciation for Ligero. He raises Ligero’s hand. All of a sudden, Ariya Daivari rushes from the crowd and attacks Ligero. Nese comes to his opponent’s rescue, but Daivari is a man possessed. His mind games have finally worked. We all thought he was in some pampering suite, but he was waiting for Nese the whole time. He floors Daivari with a brutal hammerlock lariat, before raising the Cruiserweight Championship.

I’ll admit, this rivalry hasn’t been anything fantastic. 205 Live is still smarting from losing so much top talent these last few months. A time of rebuilding is in the works, and it just so happens we have a run of the mill feud for the time being. I fully expect Nese to retain on Sunday, however. Afterward, hopefully, there is a program we can all sink our teeth into.

Our latest Ricky And Clive Wrestling Show podcast is now available for download. With Ricky doing the job for Ramadan this week, Clive does a solo show looking at heels in today’s WWE. A select group of wrestlers is regularly and heavily criticised by the IWC, be it that they are “bad wrestlers”, or undeserving of a push. In today’s world, where “kayfabe is dead”, has WWE played an ace and elicited the desired reaction for this notorious group? Is this even a viable model anymore, when our complaints are aimed behind the curtain, rather than in the ring?