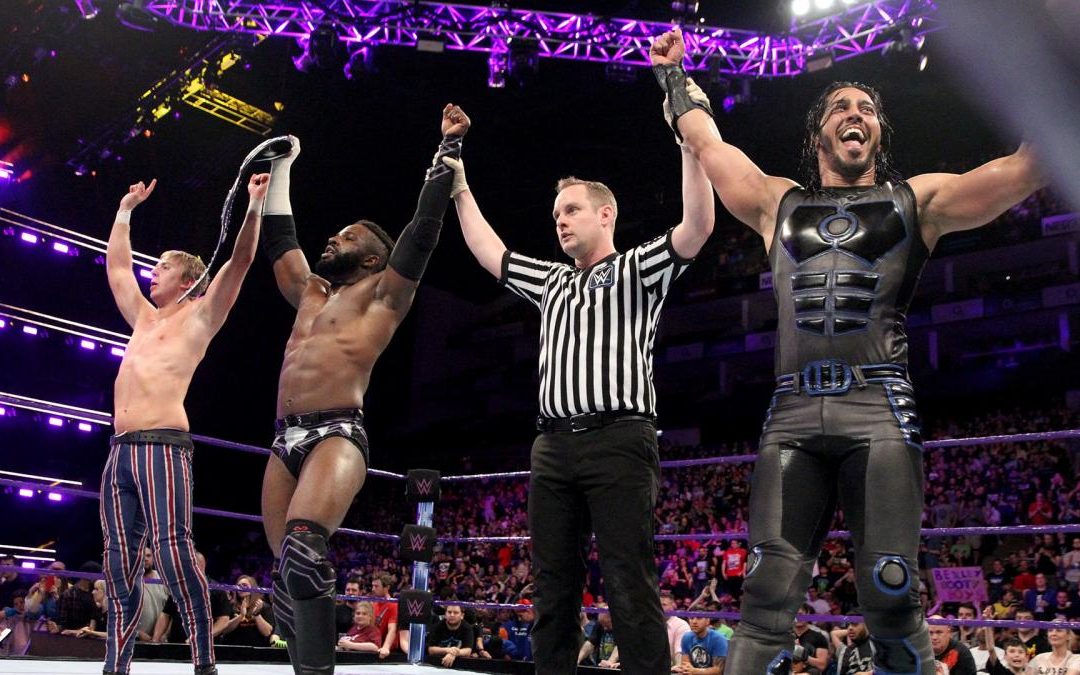 Tyler Bate vs TJP vs Kenny Williams vs Kalisto 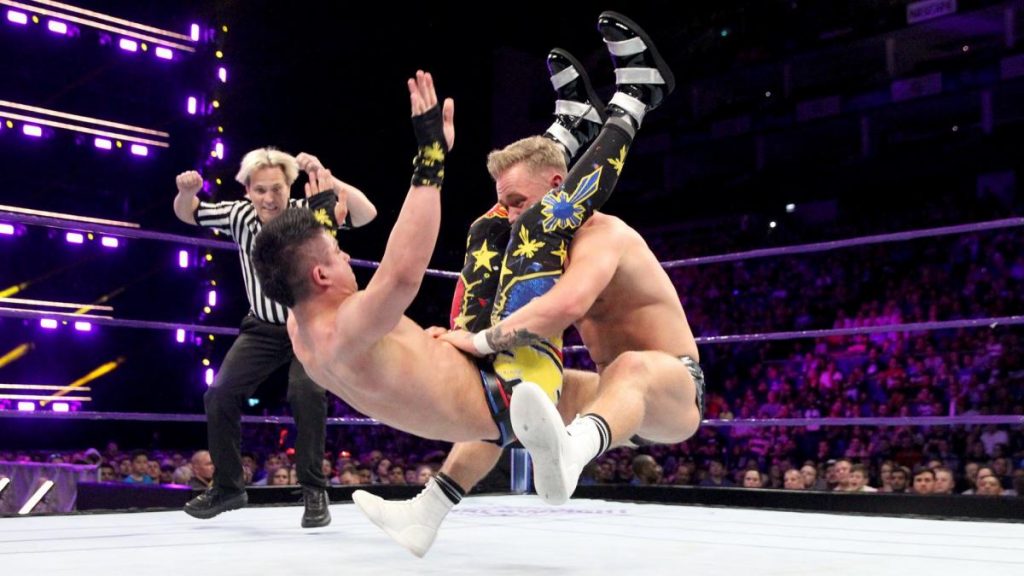 Once all competitors make their way to the ring and the match starts, Tyler Bate, cheated out of Cruiserweight Championship Tournament progression at the hands of TJP, makes a beeline for his dastardly better. Kalisto and Kenny Williams take advantage of the attempted revenge, both looking for sudden pins on Bate as TJP makes a swift retreat under the ropes.

Like frantic whippets, the pace in the ring is breakneck. But with TJP slithering back in when the coast is clear of Bate, the inaugural Cruiserweight Champion asserts his technical prowess over Kalisto. His control over the luchador looks to be broken by both Bate and Williams, but all three are now ensnared in a variety of submissions, like a nest of writhing snakes, as TJP asserts complete dominance over all before him.

Upon the turnbuckle, Kalisto’s mask is the target of TJP now, the show of disrespect for the luchador tradition being a frequent theme on 205 Live of late. Williams stops a top rope Solido del Sol with a dropkick taking out TJP’s legs. However, when recovering outside the ring, the Scot falls victim to an incoming Kalisto for his troubles, as both men spill to the floor.

Bate looks to finally exact revenge on a now cornered TJP and unloads with a series of strikes, followed by a t-bone suplex. Bate now embarrasses TJP with his patented helicopter spin, inadvertently taking out the returning Williams and Kalisto in subsequent revolutions, further disorienting the already imbalanced pair.

TJP’s veteran experience helps him ground Williams this time around, as yet again he scales the ropes with his opponent in tow. His superplex attempt is thwarted by Bate and Kalisto, who in turn take simultaneous advantage of the sitting duck Williams. The struggle between the three, however, gives TJP enough time to gather himself and seize the opportunity to fell his entire competition once again with a “tower of doom” powerbomb to all three Superstars.

Once the four regain composure, Williams has a rare moment of momentum with a suicide dive to TJP. This starts the typical chain reaction in multi-man matches with wrestlers vaulting either through or over the ropes one after the other, as Bate and finally Kalisto follow in Williams’ footsteps.

When the action returns to the ring, Williams counters Kalisto’s advances with his finishing move, the Satellite DDT. Williams is on a roll as he ducks one of Bate’s recoil clotheslines. Bate’s forward momentum carries him into an Enziguri of sorts by TJP. Kalisto and Williams tussle on the outside. Williams pushes an advancing Kalisto into the stairs, further damaging his back which he injured earlier in the match after a failed rope rebound.

TJP and Bate lock up for the final time. After a short back and forth, Bate escapes a Detonation Kick and hoists TJP up for a Tyler Driver 97, earning him a victory and righting the wrong he was the victim of in their previous outing.

The action cuts to a video package detailing Buddy Murphy’s rebellious behavior of late, with his sneak attack on Alexander being explained by the Australian as him making a statement, because all his hard work over the years in the fringes of WWE got him nowhere. He goes on to state that he’ll be the next Cruiserweight Champion. Nigel McGuinness confirms that Murphy will get his title opportunity in two weeks time on 205 Live. Vic Joseph announces also that Akira Tozawa will face Hideo Itami on next week’s show, a result of Itami no longer wishing to tag with Tozawa due to him being apparently to blame for their string of losses as a team.

Cedric Alexander and Mustafa Ali are backstage warming up for their upcoming match and are introduced to “Flash” Morgan Webster, who says it’s been a long time coming, but 205 Live just got some flash. 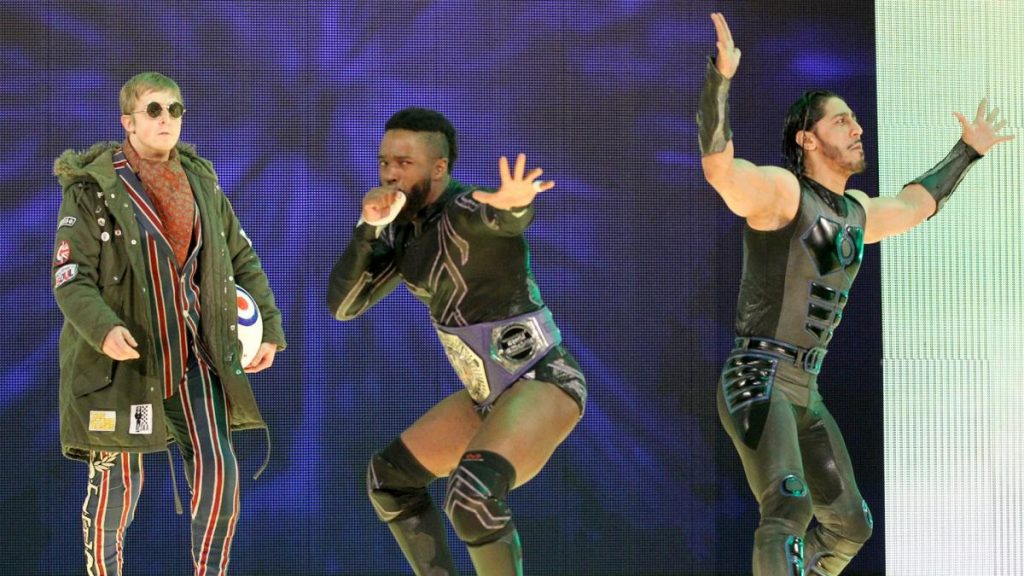 Drake Maverick makes his way to the ring and joins the commentary team to call the action in this main event. Before they come to the ring, Gulak, Drake, and Connors are interviewed backstage, all salivating like a pack of hyenas at the prospect of tearing their opponents apart in their favored, punishing technical style.

Joseph Connors starts opposite Cedric Alexander and both men lock up. They exchange wrist- and head-locks until Connors shows his vicious side in the form of elbows to Alexander in the corner. Alexander recovers and invites Webster in to soak up the popularity of his native fans. Webster exudes confidence early on, his crowd-pleasing offense being nothing his opponents want anything to do with as they all quickly tag themselves out of action.

Morgan brings Ali into the fray. However, the pack mentality of Gulak’s team comes to the fore as they strategize on how to deal with the ever game Ali. The team talk pays off as Connors wears Ali down. Ali escapes to reintroduce Webster to the ring, but the Welshman is no match for Gulak, as the submission specialist mocks Webster’s flashiness. Drake then comes in to ground and control Morgan.

Webster survives the concerted attack, crawling over for help from Ali, who rebalances the scale in his team’s favor with his trademark comeback moveset. He takes advantage of Drake and Connors, both all too eager to pounce on Ali, by vaulting the ropes and launching one Englishman into the other by way of a hurricanrana. Unfortunately for Ali and his team, this only results in a near fall.

Alexander is tagged in and delivers his typical blows with elbows and feet to Connors. This doesn’t last long though as the action quickly breaks down into a chaotic melee of differing high impact strikes and slams, leaving all six competitors on their backs, to the appreciation of the crowd.

Once the ring is cleared so breathers can be taken, a handspring twisting kick by Alexander is countered by the wily Gulak, who catches the foot and looks for a Boston crab. Before Gulak can cause any damage, however, Ali rescues his partner. He hits his long-term foe with a tornado DDT and gains his team the victory with the “054”.

The show closes with the victors of the match climbing the ropes and celebrating with the audience.

How did you feel the UK guys did this week? Kenny Williams is in the middle of a hot screwjob angle in Insane Championship Wrestling just now, so I’m looking forward to what his character is like in the future. Feel free to drop your comments here or wherever you read this on social media. You can find me on Twitter and in Social Suplex’s Facebook group. You can read more of my columns right here.