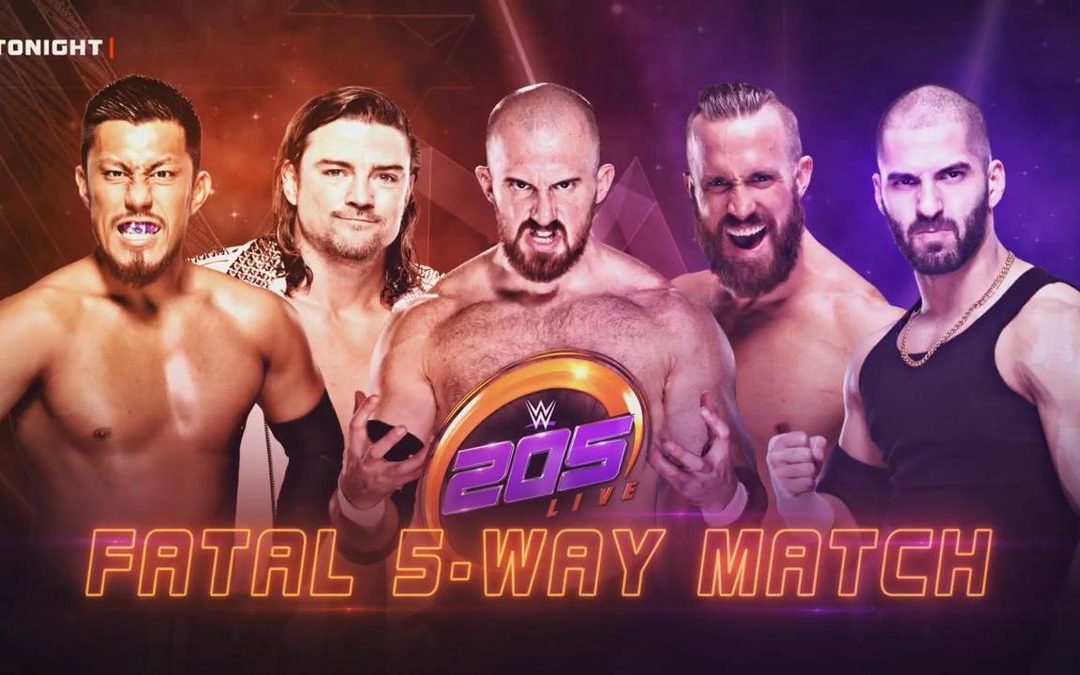 Many questions can be asked heading into this week’s 205 Live. What’s next for Tony Nese’s Cruiserweight Championship reign, and what will Ariya Daivari have to say about his loss to Nese at Money In The Bank? Will The Singh Brothers’ losing streak continue, or does Lars Sullivan have unfinished business with the Singhs’ opponents, the Lucha House Party?

The most important question of all, obviously, is whether or not a Cruiserweight will end the episode as the WWE 24/7 Champion?!

After a highlight video of Nese’s Cruiserweight Championship defense at Money In The Bank, Vic Joseph, along with Aiden English and Nigel McGuinness, announce that the main event of 205 Live this week will be a Fatal 5-Way. Akira Tozawa, Brian Kendrick, Oney Lorcan, Mike Kanellis, and Ariya Daivari will battle each other to give General Manager Drake Maverick something to consider, as it pertains to the next challenger for Tony Nese’s title. Knowing 205 Live, this doesn’t outright give us a number one contender, but it will move things along nicely.

The Singh Brothers take the mic in the ring to laugh at Lucha House Party’s beat downs at the hands of Lars Sullivan. They state that LHP are in no fit state to compete tonight, so ask the referee to count to ten, awarding the victory to them. Before they start the count, Drake Maverick’s music plays.

Maverick addresses Samir and Sunil, confirming LHP won’t be in attendance. As the General Manager, however, Maverick won’t deny the WWE Universe some tag team competition and has found some suitable replacements. Jack Gallagher and Humberto Carillo make their way to the ring. Humberto Carillo is now wearing a cape of some description. Ooooh dear.

Naturally, The Singh Brothers are unhappy. Carillo starts the match with Sunil and uses his surprise addition to the match to his advantage, keeping a surprised Singh on the back foot. Jack Gallagher is tagged in and begins his unique technical breakdown of his opponent. Gallagher evades some offense. Easily, I should add. He ties Sunil up in knots, almost literally, before bringing Carillo into the match.

Carillo continues the technical strategy, dotted throughout with some luchador offense. Samir comes in, but eats a clothesline. Sunil uses the distraction to gang up on Carillo with the help of his brother, the referee holding Gallagher back the whole time.

The Singh Brothers deliver some tandem offense before Samir takes over. He brings Carillo down with a headlock. Carillo fights through it, but is taken down with a dropkick and a pin attempt. Sunil comes into play, continuing to take it to Carillo. Some Bollywood dancing takes place. Carillo rolls Sunil up for a pin, but he wriggles free.

Eventually, Carillo gains the upper hand before bringing Gallagher in for the hot tag. Gallagher delivers some hard hitting offense on Samir this time. He transitions to his new trademark move, the stalling vertical suplex. He covers Samir, but the Singh kicks out at two. A single leg Boston crab keeps Samir on the mat. Samir crawls forward to reach Sunil’s outstretched hand. Again, the Singhs work together to ground Gallagher, getting a cheap shot in against Carillo in the process.

Another cheap shot to Gallagher as he is rolled up by Sunil. Gallagher kicks out; upset averted. Gallagher breaks free from a double team suplex and charges towards Carillo for the tag. Gallagher takes care of Samir, sending him to the outside. Carillo takes out Sunil with a dropkick and then his finisher (now called the Aztec Press. Thank you for giving that convoluted finisher a name). He folds Sunil up for the easy win.

I’m sure Carillo and Gallagher will be a fine tag outfit, but they weren’t able to show us why in this mediocre match against the Singh Brothers. Perhaps that this their fault, which is strange considering how entertaining they have been known to be in the past. All in all, a very inconsequential start to this week’s 205 Live.

Mike and Maria Kanellis are backstage now. Mike says tonight’s main event isn’t about showcasing the best cruiserweights of 205 Live. It’s about Mike witnessing the destruction of the friendship of Tozawa and Kendrick. Maria finishes by saying Maverick won’t be able to ignore Mike anymore.

Oney Lorcan is up next, stating that he deserves a crack at the Cruiserweight Championship. Tonight’s match is exactly the kind of fight he likes, and this match will prove why he deserves that shot.

The commentary team discusses Drew Gulak’s cryptic posts on social media. Mr. Gulak seems to be going through a dark phase just now. He’s also been keeping an eye on KUSHIDA over on NXT. Will we see an interaction between them on 205 Live? Somehow, I very much doubt it, but time will tell as to what’s going on in Gulak’s head.

The first four competitors make their entrances. Sarah Schreiber interviews Ariya Daivari before he comes out. He isn’t happy with the “fluke” result from Sunday. He isn’t happy that he has to “prove himself” again in this match. But, prove himself is what he’ll do.

The match gets underway. Kanellis is cornered by the remaining four but rolls out away from danger. Instead, Daivari is the focus. Kendrick and Tozawa throw Daivari and Lorcan out of the ring. They make quick work of the returning Kanellis, and monkey tosses Lorcan to the mat. Lorcan rolls out. Kendrick and Tozawa shake hands before they lock up. The square off doesn’t last long, however, as Daivari and Kanellis come in to form a team of their own.

Tony Nese is watching backstage. Very quickly, Daivari and Kanellis are ganged up on by the rest. Lorcan throws Daivari out. He goes for a suicide dive but meets Daivari’s forearm instead. Daivari throws Lorcan into the barricade. The match is starting to fall apart as far as simple structure is concerned. WWE does ”  chaos” very well, however. This only adds to the urgency of the match.

Kendrick has Daivari in the middle for a captain’s hook submission. Lorcan breaks it up, looking for a half and half suplex. Kendrick counters, bringing Lorcan down for another captain’s hook. Kanellis breaks things up this time, demolishing anyone in his path and, strangely, garnering a cheer from the crowd.

Kanellis and Lorcan take turns at lighting up each other’s chest in the corner. The exchange intensifies as the chops become uppercuts. Lorcan charges the ropes, looking for a running uppercut, but Kanellis floors him with a spinebuster. Kanellis gets the first pin attempt of the match.

Kanellis mocks Lorcan, but the Boston Butcher grabs Mike’s beard, rattling him with brutal slaps. Lorcan follows up with a running blockbuster. He takes Daivari on the apron out of the game. He levels the incoming Kendrick with a half and half. He earns a pin attempt, but the referee doesn’t reach three. Lorcan evades a double team from Kendrick and Kanellis, hitting them both with a double blockbuster. Tozawa is up next, but Lorcan ducks the advance, somersaulting out the ring onto Daivari and Kanellis instead.

Lorcan is on fire right now. This is Lorcan at his best. Tozawa puts a stop to the momentum, however, joining his opponents on the outside after a suicide headbutt. Tozawa rolls Daivari into the ring, hitting him with a missile dropkick. He goes for his senton finisher, but all five men are now back in the ring. Tozawa can’t move for bodies littering his path.

A “tower of doom” spot follows, Kendrick taking the brunt of it. Daivari, ever the sneaky individual, wasn’t involved in the spot. Instead, he takes Kendrick out with a Persian frog splash. The two count that follows is a long one.

After some more chaos, Tozawa has Kanellis in the middle of the ring with an octopus stretch. Maria jumps onto the apron. Tozawa is incensed, making his way over to her. Kanellis capitalizes with a roll up, but to no avail. Tozawa takes care of Kanellis before Daivari comes into work on Tozawa. He takes Tozawa up the turnbuckle, a superplex in mind. Tozawa clubs Daivari’s back repeatedly and relentlessly. Daivari is face-planted onto the mat. Kanellis grabs Tozawa, dragging him out to the middle of the apron. He swings for a clothesline, but Tozawa ducks, destroying Kanellis with a German suplex on to the … all together now …. hardest part of the ring!

Tozawa continues his typical 2019 form with more destruction, this time Daivari the victim. He looks to have won the match, but friend and mentor, Kendrick, breaks up the three count. Kendrick seems to apologize, offering his hand. Surely Tozawa understands, but instead, he starts an exchange of forearms between the two. A double cross body brings the match to a halt.

Kendrick connects out of nowhere with a sliced bread 2.0. He goes to cover Tozawa, but Kanellis spoils the party. As do Daivari and then Lorcan. Again, bodies litter the mat, but Tozawa is the one to take advantage of the melee. Daivari hits Lorcan with the hammerlock lariat, but Tozawa rolls him up in amongst the mad scramble. The referee counts to three, and Tozawa is your winner!

I have to say, I’m surprised with the result. Not so much that Tozawa looks to be having more time to shine. Simply that he was completely out of the equation during the final moments. What’s nice to see is Kendrick congratulating Tozawa afterward, their friendship still intact. It was a good match. Not up there with the greatest of the 205 Live multi-man matches, but still decent. Are we looking at the next contender for the Cruiserweight title? We shall see.

The most disappointing thing about tonight’s show, though? No 24/7 Title action. To say I’m disappointed is the understatement of the century. Our latest Ricky And Clive Wrestling Show podcast is now available for download. With Ricky doing the job for Ramadan this week, Clive does a solo show looking at heels in today’s WWE. A select group of wrestlers is regularly and heavily criticized by the IWC, be it that they are “bad wrestlers”, or undeserving of a push. In today’s world, where “kayfabe is dead”, have WWE played an ace and elicited the desired reaction for this notorious group? Is this even a viable model anymore, when our complaints are aimed behind the curtain, rather than in the ring?