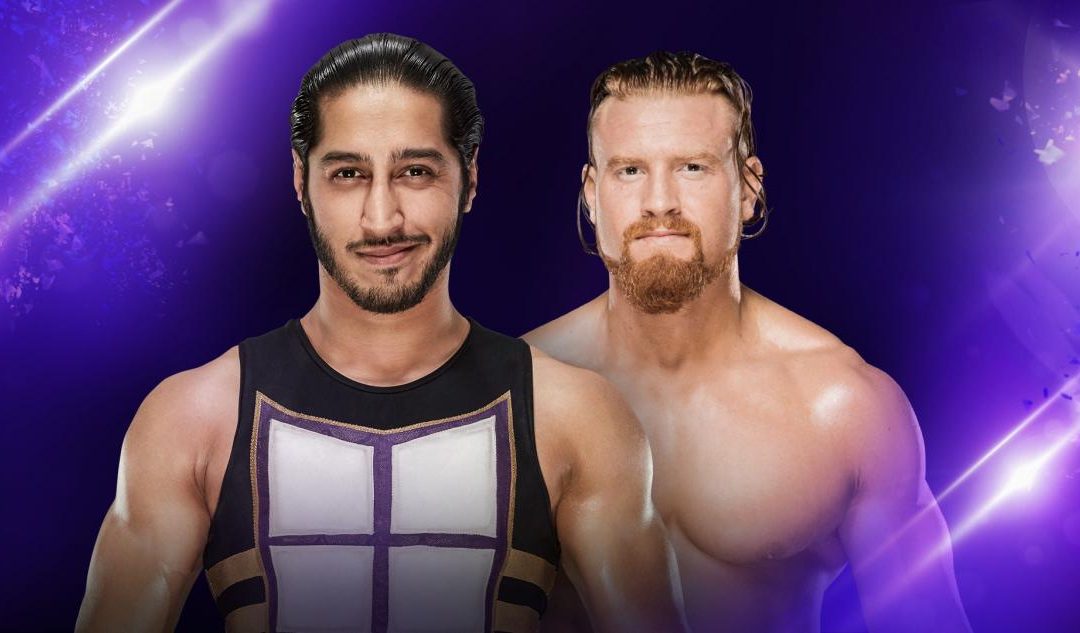 This week’s 205 Live starts with a hype video detailing all the matches that will take place tonight. Lucha House Party laugh off the threat posed by Brian Kendrick and Jack Gallagher. Tony Nese explains how he doesn’t want to be a laughing stock any more. Lastly, Mustafa Ali takes on Buddy Murphy in a rematch of the Cruiserweight Championship Tournament Quarter Final to main event the show.

Gallagher and Dorado exchange mat based grapples, but Dorado is savvy to Gallagher’s unorthodox escapology. The exchange breaks down into what can only be described as a whirligig of roll-through pin attempts, much to the disdain of Gulak on commentary. Once both competitors reach their feet, a dizzy Gallagher topples over, and the equally disoriented Dorado lands on top of Gallagher for a slapstick pin, which Gallagher quickly curtails.

Metalik comes into play, living up to his King of the Ropes moniker, showcasing an array of rope based offense that crescendos to a flop over the top. During this display, Kendrick had sneakily tagged himself into the match, unseen by Metalik, who is then stopped in his tracks by the legal man with a kick to the back of the head.

Quick and frequent tags between Kendrick and Gallagher bring the match back to their (and Gulak’s) preferred style, but Metalik escapes and tags in his partner. The fired up lucha quickens the pace of the match, as he and Metalik deliver superkicks and resultant suicide dives to their opponents. A shooting star press by Dorado on Gallagher wins the Lucha House Party tag team the match.

The on-air criticism of the Lucha House Party by Gulak is no surprise, but what is interesting is his endorsement of Gallagher and Kendrick’s style. Its’s possible that we could we see an alliance between the three like minded wrestlers in the future.

After a video from Mustafa Ali promising to stop Murphy in his tracks, Murphy explains to Dasha Fuentes that, while he is still getting to grips with 205 Love’s weight requirements, he’s becoming unstoppable nevertheless.

Tony Nese talks his traditional trash on the way to the ring, this time adding that he’s fed up having to explain why 205 Live is his show.

Nese launches Clayball across the ring as the bell sounds, stopping to pose before continuing his early dismantling of his opponent, punctuated with dismissive kicks to the top of Clayball’s head.

Any fightback from Clayball increases Nese’s aggression and refocuses him away from his exercise based moveset, as a running clubbing forearm outside the ring from the Premier Athlete floors a helpless Clayball.

Nese throws Clayball into the ring and brings the match to a quick close with a Running Nese. Nese seems a lot more driven this week, and is clearly sending a message of intent to the rest of the roster.

We then get a Hideo Itami video with the Japanese star explaining why he is such an attraction. He questions why he needed a tag team partner in Akira Tozawa. Itami states Tozawa doesn’t deserve him, and after highlighting the supposed mistakes by Tozawa that cost the tag team two losses in recent weeks, Itami declares he’s had enough.

Cedric Alexander is talking to Drake Maverick backstage. Maverick explains to Alexander that 205 Live will present a series of matches next week between the cruiserweights and WWE’s United Kingdom superstars, as part of the traditional post-Wrestlemania tour.

After tentatively circling each other, Ali answers Murphy’s early assault with some chest chops. This angers Murphy who looks for an early powerbomb, but Ali escapes and sends Murphy out of the ring. Murphy capitalises from the short respite however, catching Ali off guard and reinstating his danger with a running suplex onto the floor.

Back in the ring, and Murphy now exerts control, viscously whipping Ali around the ring. Murphy’s missing weight, and his championship opportunity, has given us a Murphy intent on inflicting as much damage as possible on any wrestler in his crosshairs. Even less visually impressive offense, such as the rear chin locks and sleeper holds he decides to wear Ali down with, are included with, but don’t take precedence over, his usual volley of hard hitting strikes.

Ali powers out of the grounding, and a speedy back and forth ends in a double cross-body, flooring both men. Ali is the first to collect himself. As he tries to take control, adopting the same methodical game plan as Murphy, the Australian reasserts his dominance by performing a running cannonball into the corner as Ali, initially straddling Murphy’s back, careers into the bottom turnbuckle with force.

Ali later looks to take advantage of a Murphy who is entangled in the ropes. Murphy tries to make the best out of an impossible situation, and almost succeeds with a tilt-a-whirl slam of sorts, but Ali somehow counters this with a DDT, all the while his opponent is still caught in the ropes. This is fantastic innovation by both men. Murphy’s survivalistic wherewithal is answered superiorly by Ali’s apparent defiance of physics.

Ali’s advantage in the match doesn’t last long, however. After a sickening knee and a subsequent DDT to Ali’s head, Murphy is caught by surprise with a roll-up and a near fall. Murphy is angered to the point that he punishes Ali with a series of brutal powerbombs, echoing the final moments of Murphy’s technical knockout victory from last week.

As the referee shows concern over whether Ali can continue, Murphy looks for more of the same, but Ali’s trademark resiliency shines through with a levelling DDT from atop Murphy’s shoulders.

Ali wants to take the match to his preferred lofty heights. A failed hurricanrana attempt, to outside the ring from the top rope, sees Ali show off his catlike reflexses as he lands on his feet. Ali’s awareness is still on point, as he floors an incoming Murphy with a superkick.

Ali spills Murphy into the ring. As fate would have it, Murphy is sprawled in the same position that left his arm exposed for Ali to land a 450 Splash on in their tournament match and take ultimate control of. Murphy senses the danger this time and escapes. This leaves Ali gasping for air and holding onto the bottom rope, trying to regain his footing. Murphy turns the tables and jumps onto Ali’s arm, exacting the same damage upon Ali that he fell victim to previously.

Murphy wastes no time in capitalising on this, using Ali’s injured arm as a wrench to help throw him head first into the corner stanchion. The devastating reverse of fortunes proves too much for Ali, who is dealt a Murphy’s Law for the Australian to earn a hard fought victory.

Another fantastic encounter between these two men, a mixture of aerial offense and high impact power moves. Although only two matches strong, Ali is finding an adversary who is as much of an obstacle to overcome as his long term enemy in Drew Gulak. The show closes with Murphy celebrating his victory, sending a clear message to Cedric Alexander, who was watching apprehensively backstage throughout.

Will Drew Gulak join forces with Kendrick and Gallagher? Was the Ali vs Murphy match better than their tournament outing? Feel free to drop your comments here or wherever you read this on social media. You can find me on Twitter, and in Social Suplex’s Facebook group. You can read more of my columns right here.