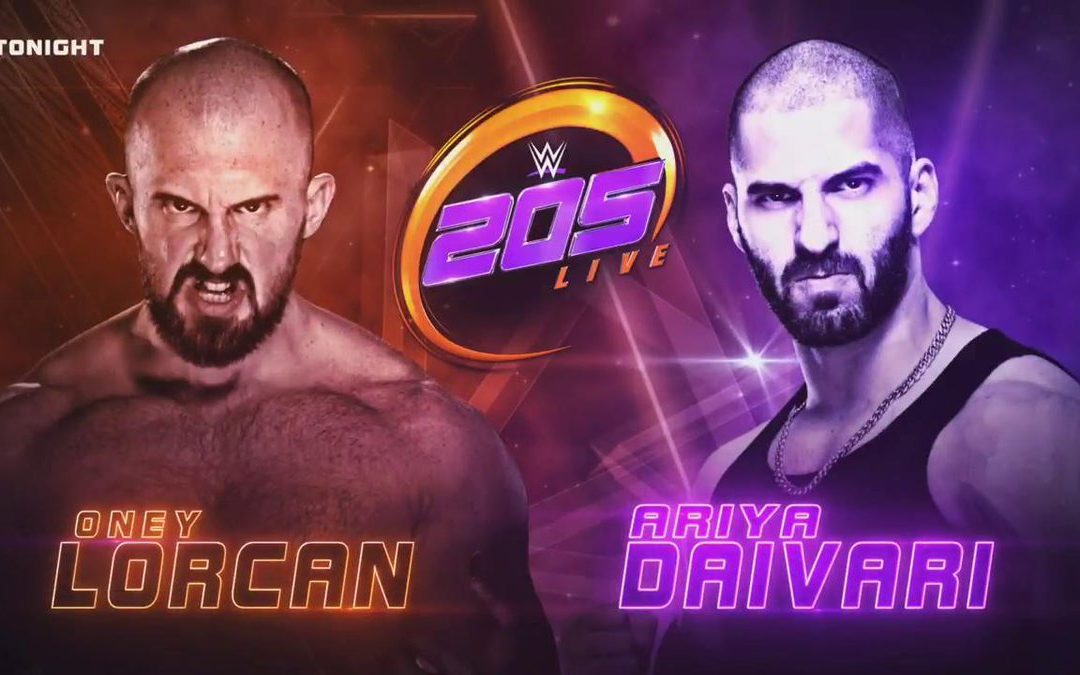 Last week’s 205 Live was one of the more better received episodes in quite some time, by fans, pundits, and even Cruiserweight alike. Chad Gable’s debut left many fantasy booking his next twelve months, while the main event was arguably 205 Live’s best ever multi-man match, as lauded by yours truly.

An important question remains unanswered, however. With both Drew Gulak and Akira Tozawa pinning each other to finish last week’s epic bout in confusion, what does this mean for Tony Nese, currently without an official challenger for the Cruiserweight Title heading into WWE Stomping Grounds this Sunday?

The answer is given to us immediately once 205 Live kicks off this week.  General Manager confirms that, as both Gulak and Tozawa scored a winning pinfall, they both qualify. WWE Stomping Grounds will host a triple threat Cruiserweight Championship match: Tony Nese (c) vs Drew Gulak vs Akira Tozawa

Nigel McGuinness and Aiden English join Vic Joseph on commentary this week to call the action. They discuss the ongoing disagreement between these two teams. I use the term disagreement because, well, it’s not much of anything else to date

Having not heard any news from Smackdown Live yet, I wonder why we are lacking a stable hard cam; footage of the match from the crowd seems to be wavering and changing vantage point a lot more than normal.

It is admittedly distracting. Regarding what’s actually going on in the ring, it is as you would expect from the Lucha House Party (LHP). Frequently changing tags. Tandem offense, some of it botched, if I’m being cruelly honest. The Singh Brothers are doing well to keep up, taking a page out of Jinder Mahal’s book with some lovely headlocks to ground things to a halt.

Samir and Sunil are in control for most of the early parts of the match, despite LHP having the numbers advantage with Kalisto offering support on the outside. The Singhs wind him up enough that any retaliation from Kalisto would result in disqualification of his men. So far, so good, so Singhs.

Lince Dorado offers a way out for his team. Charging the ropes after an Irish whip, he handstand springboards his way back into the middle for a stunner. Respite achieved, and both men make hot tags. Gran Metalik continues where Dorado left off, dancing around and on the ropes with an energy not really seen by him in a long time. He tags Dorado in, but uses his partner to his advantage as he vaults off the turnbuckle onto both Singh brothers on the outside.

Dorado has all momentum on his side, but Penelope the Pinata comes into play, the mascot distracting LHP as sweets spill from the equine animal’s rear end. Dorado dances gingerly around the candy strewn around the ring but gets rolled up for an easy three count from the resultant pin.

We are now one a piece in this program between both teams. Which means, evidently, a rubber match of some description is on the cards. If there was ever a trope overused in 205 Live, it’s the rubber match. And for such a trope to be used for two teams who do little for me personally, especially without any prize on the line, I’m already groaning at the prospect.

Noam Dar is in Magalouf. Apparently. Rehabilitating his injuries. He is looking forward to coming back to action on 205 Live. That is only if General Manager Drake Maverick drastically improves working conditions on the show after Dar was attacked by Drew Gulak a few weeks ago. Brian Kendrick comes on screen.

He is bemused by the talk of Magalouf. It would appear Noam Dar is nowhere near the Spanish island. Kendrick has to get back on his “private jet”, as he has a match back in California in literally two minutes. That was all a bit bizarre, but humorous nevertheless.

The Brian Kendrick vs Russ Taylor

Brian Kendrick gets a nice chant from the crowd as he takes off his oversized leather jacket. Kendrick proffers his hand to Taylor as a sign of sportsmanship. Taylor bats it away, immediately earning the ire of Kendrick.

The match officially gets underway, and the pair circle each other. Taylor mockingly offers his own hand this time. Kendrick naturally swats it away but eats a forearm as a result. Kendrick is on his feet like a shot and rains punishment down on Taylor, asking him “who are you” all the while.

Dropkick. Enziguri. Sliced Bread finisher. One, two, three. It’s all over. And the cameras are all over…the place.

The commentary team looks back at Jack Gallagher’s count out loss in last week’s match against the debuting Chad Gable. Sarah Schreiber is backstage with Gallagher. Jack laments that one of his best efforts was in a losing performance. While he doesn’t doubt Gable’s efforts, he is sure Gable would agree there is unfinished business between the two.

Mike and Maria Kanellis appear from the side. Mike says Jack should feel ashamed of what happened last week. Mike says he blew it. He says it’s an embarrassment. An embarrassment, just like Drake Maverick winning the 24/7 Title and leaving the arena before 205 Live even started. Mike and Maria make hints at taking over the show for their own benefit.

Jack offers the not-so-busy Mike a match for next week, hoping to give him a nice black eye as a gift for his wife. Mike looks forward to seeing him try.

In case you missed it, the reason this somewhat lackluster matchup is getting another go around is due to Ariya Daivari attacking Oney Lorcan with a chair last week, costing Lorcan the chance to win the Cruiserweight Title #1 contender match. With weapons now a theme in this young rivalry, let’s hope this is what shoots some impetus into this program. Lorcan, after all, is at his best when carnage is all that surrounds him.

Lorcan attacks Daivari with a running uppercut before Daivari’s shirt is even off. Lorcan rains down chops and strikes in the corner. He charges the opposite turnbuckle, returning with another uppercut. Daivari retreats outside the ring before we get a repeat assault. Daivari scurries away and tries to escape over the barrier on more than one occasion.

Lorcan chases Daivari and throws him into the ring. Daivari tries to gain the upper hand, but Lorcan is simply furious. He tries to lock in his half and half suplex, but Daivari elbows his way out of the grip. He takes Lorcan halfway up the ropes. Locked in an armbar, Lorcan crashes down onto the mat, still in Daivari’s grasp. Lorcan’s elbow is in serious danger after the hyperextension. No doubt that will be a focal point for Daivari going forward.

The match has slowed down considerably now. Daivari works Lorcan’s elbow via a variety of holds. He then launches Lorcan, elbow first, into the top turnbuckle. Then the opposite corner. Lorcan is in trouble but fights back with weak chest chops. The fightback, so far, is to no avail. The elbow lock returns and grounds Lorcan in the centre.

Lorcan wriggles free and grabs Daivari’s foot before a superkick can be delivered. Daivari brings Lorcan in, swiveling him round, and locking in the Million Dollar Dream. Lorcan lashes out, but that only locks him in tighter. Lorcan is fading, but he manages to get on his feet eventually, breaking free by crashing Daivari into the turnbuckle.

Daivari keeps momentum on his side with an arm breaker. He props Lorcan onto the top rope. He rips Lorcan off, smashing him hard onto the canvas. Daivari goes for his Persian Lion (frog splash), but Lorcan dodges at the last minute. Lorcan is back in it. Running elbows into the corner. A blockbuster, followed by a pin attempt. Lorcan “Hulks Up”, the crowd willing him on. Huge chest chops are exchanged between the two. More uppercuts by Lorcan. A huge running uppercut temporarily fells Daivari.

Lorcan capitalizes with a half and half suplex. Before he can make the cover, Daivari rolls to the outside. Lorcan wastes no time, though, by somersaulting over the top rope onto Daivari. As if sensing the tide has turned for the worst, Daivari attacks Lorcan with a chair, thereby disqualifying himself from the match.

As predicted, a steel chair has come into play in this rivalry again. No doubt some sort of weapons match will take place in the future. Before then, though, Daivari destroys Lorcan around ringside and then on the stage, launching him into the titantron.

He finishes the assault with a hammerlock lariat onto the steel stage. Referees tend to Lorcan as Daivari watches on. I can get behind this. Lorcan will be at home in more violent surroundings whenever these two square off for their….sigh….rubber match. Nevertheless, Lorcan is beginning to look a little bit more at home on 205 Live.

The episode finishes with video packages from Tony Nese, Akira Tozawa, and Drew Gulak. The messages given by the three men are what you would expect. The most convincing of the three, however, was Drew Gulak’s. Gulak is a new man. More focused, dangerous, and sadistic than ever before. He says there is no hope for a better 205 Live, but there is hope for a better Drew Gulak, and that he has no respect for the rules anymore.

As much as I’ve enjoyed Tony Nese’s title defenses, Drew Gulak as the anchor of 205 Live is long overdue. Even if he comes up short, I would love the possibility of Gulak and Nese running a program on the way to Summerslam. One can only hope.

Latest Ricky & Clive Wrestling podcast available for download here. WWE has been on the receiving end of an enormous and growing wave of criticism over the last couple of years. That rise of disdain goes hand in hand with both the ever-increasing use and abuse of social media, and the birth of the new “competition”, AEW. Is the hatred warranted? Do disgruntled fans have blinkers on? Is the general consensus – “WWE Sucks LOL” – even argued in a reasonable and level headed manner? In another solo show, Clive looks at the behavior of the IWC (and its influencers) in more recent times, and how this echo chamber has resulted in possibly the worst aspect of wrestling fandom. (Disclaimer: This was recorded a few weeks ago, so if anything truly dreadful has happened, don’t shout at me!)