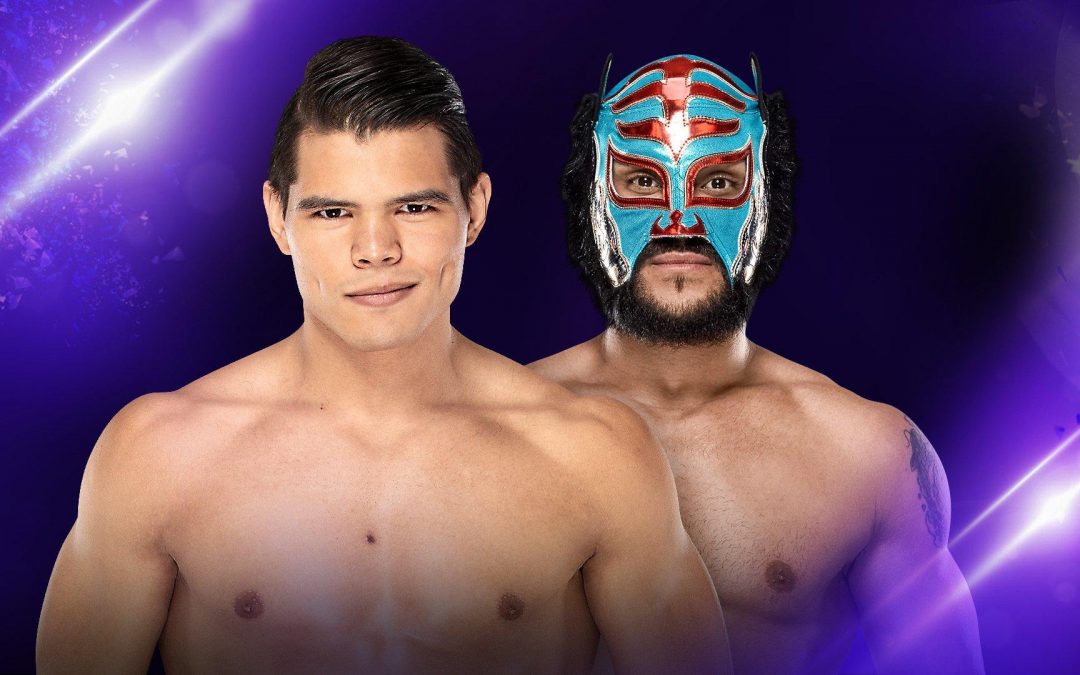 Former WWE Cruiserweight Champion Tony Nese has cut an unsettled figure of late. His loss to Gulak some months ago now has seen him act strangely, siding with his enemies in the Captains Challenge match two weeks ago, as well as question if it will take more than being just the Premier Athlete to get to where he was before.

His opponent tonight, Mike Kanellis, has had a similar crisis in confidence. Behind all the drama with his wife, Kanellis has taken his poor win-loss record on 205 Live to heart. His mission statement since coming to the Cruiserweight show was to become the Champion. So far, he has nothing to show for it except for repeated failure.

With that in mind, one can understand that neither man would go into their match with a nothing-to-lose mentality. A willingness to damage themselves as well as their opponent. A DDT from Kanellis to Nese onto the steel ramp on the outside early on in the match supports this thought. The extraordinarily punishing ordeal continues for Nese, as Kanellis leaps from the apron, landing a heavy kick onto the back of Nese’s head, draped across the fan barrier.

Maria Kanellis has been watching the match from backstage, all contended smiles. Up till now, that is. For Nese begins his comeback with a German suplex counter, driving the back of Kanellis’ head into the bottom turnbuckle back in the ring. Nese works through a sequence of his signature offense, putting a bookend on it with his springboard moonsault and a pinfall attempt.

Kanellis looks to his resolve to muster any sort of dominance again, as Nese continues to work over him with a high aimed open palm strike on the top rope, and a discombobulating hurricanrana. But a rebound clothesline from Kanellis is hard hitting enough to take Nese clean out of his boots. Kanellis adopts that self destructive mindset as he begs Nese to hit him, hit him, over and over again.

Nese naturally acquiesces, seeming to thrive off the request with a flurry of offense. He looks close to finishing Kanellis off with a 450 Splash, but Kanellis miraculously kicks out, as if soaking up physical punishment is what it takes to make him stronger.

Nese, desperate not to lose any momentum, looks for his Running Nese. But Kanellis is waiting with a superkick. He grabs Nese’s neck and arms, spinning him round for his neckbreaker finish, and what could be his first victory on 205 Live in months.

How the tides have turned. While Kanellis looks to be on the rise, Nese sinks further into a state of a poor streak of results.  It wouldn’t surprise me if Nese became unhinged in a similar manner to Kanellis over the next few weeks. The question should be asked, though, is whether this will work out in Nese’s favour as he looks to return to championship contention.

Later on in the show, Lorcan looks to calm a temperamental Nese down backstage, but Nese simply loses it. He attacks Lorcan, launching him around the area and into some unforgiving furniture. Obviously, this is setting up a match for some point in the near future. If Nese is able to match Lorcan’s intensity as we have seen tonight, an intensity that really hasn’t been seen since he turned face early in the year, then we are in for a treat.

One week into their Singh Studios respite, Samir and Sunil have come to the conclusion that Brian Kendrick and Akira Tozawa are to blame for their fall from grace. They will look further into the archives to find what it takes to become a great tag team. For tonight, however, we will get the lesser offering of Tozawa and Kendrick. So they say.

The intention has been for Tozawa to face Jack Gallagher, but Gallagher is seemingly not medically clear to compete. While the veracity of this claim is not completely believed by Tozawa and Kendrick, the tag team still have a job to do tonight. As you would expect with the mid-show squash match, that job is an easy one.

Their tandem offense is delivered with ease. Their frequent tags give a sense of urgency. Tozawa and Kendrick’s victory over the local talent is simply a foregone conclusion.

Kendrick takes the microphone afterwards to voice his disappointment over Gallagher not being available this week. Kendrick offers Gallagher the chance to compete in a tag team match against them next week, Gallagher having the tag partner of his choosing.

Now a mainstay of 205 Live, Humberto Carillo has had a busy few months. He seems to have had his fingers in many pies during this time, but none of those have been particularly sought after by Carillo himself. Okay, he is the current number one contender to face Drew Gulak at WWE Clash of Champions for the Cruiserweight Championship, but it’s not as if he demanded this to be the case. It was Oney Lorcan who handpicked Carillo to be a part of his Captains Challenge team. One can’t fault the young luchador for earning Lorcan’s side the victory, being given a resultant opportunity to compete for the title by General Manager Drake Maverick, then securing another win to set that shot in stone.

By simply turning up for work and doing what has been asked of him, Carillo has caught the attention of many of the 205 Live roster, for better or worse. Taking his mentor turned betrayer Drew Gulak out of the equation for a moment, Lucha House Party’s Lince Dorado has taken umbrage with the opportunities afforded Carillo. The fellow luchador has made it his mission to remind Carillo, and the 205 Live Universe, that his team are the founding fathers of the Cruiserweight show’s high flying Hispanic wrestlers.

So caught up in his own pride, Dorado is resorting to tactics not within the scope of his moral alignment. He has even begun to allow Ariya Daivari to infiltrate LHP, whether intentional or not. Dorado is either a conflicted individual, or knows full well that he has to employ the help of an openly dastardly Daivari, so as to stand atop 205 Live’s lucha-libre mountain, with or without his stablemates by his side.

In a segment filmed earlier in the day, Dorado discusses with Drake Maverick his lack of opportunities, never having had a title shot in all his time on 205 Live. Dorado is very respectful when addressing Maverick, who decides to raise the stakes for their main event match. If Dorado beats Carillo, he will be added to the Clash of Champions Cruiserweight Championship match.

Dorado is confronted by Daivari during the show, basically asking him for thanks for all the work he has put in of late. Dorado doubles down on his innocence in it all. And, to be fair, it’s a pretty convincing performance. He talks of not needing help from anyone as he looks to climb to the top of the Cruiserweight Division. I’ll be honest. This to me says Dorado is simply a proud man, but one who is now more focused on fighting the good fight, rather than resorting to dirty tactics to advance himself.

That opinion continues as the match gets under way, Dorado showing respect to his opponent in the form of a handshake. The lucha-libre sequences that follow are done with respect, again, for one another. But the stalemate brings out the fiery Dorado we are more accustomed to recently.

A truly vicious exchange of overhand chops sees Dorado sink in more of the stinging strikes. Carillo takes to the outside to compose himself, but Dorado follows out quickly after with an excellent suicide tornado DDT.  A pin attempt is unsuccessful, but this is a different Dorado who makes me question if the Clash of Champions match will be simply a singles bout.

Dorado seems to have made tonight his coming out party, as if he has made a bet on himself. A fantastically confident promo segment with Daivari earlier. A nasty streak in his match that stands out from the rest of the 205 Live roster, thanks to the speed with which he is able to enact his punishment. Dorado has impressed me greatly in recent months. More-so from a character standpoint, as his wrestling capabilities were never in doubt. But tonight? Tonight, Dorado has ticked a number of boxes that people usually have in their criteria for a wrestler deserving of the spotlight.

Carillo gives as good as he gets in this match, however. Obviously lacking in character, he makes up for it with the inclusion of new offense on top of his already visually impressive arsenal. Carillo has to go over and above to even come close to matching Dorado’s intensity. Carillo’s chest is simply red raw from the damage inflicted by Dorado’s chops.

Fatigue is finally setting in between the two after what has turned into an excellent match that is well worth your time. With the final stretch now underway, a frantic sequence of reversals ensue. Both men are scratching and clawing for the upper hand in this hotly contested match based on pride. As Dorado has been the one to take issue with Carillo recently, it is fitting, then, that he employs a lucha friendly front facing hurricanrana roll up for a successful pin, earning Dorado a spot in what is now a triple threat match for the Cruiserweight Championship at Clash of Champions.

While one portion of the aftermath of this match could have been predicted, the rest wasn’t as easy to foresee. As Dorado celebrates his victory over Carillo on the ramp, he is attacked from behind by Drew Gulak. Carillo, even in defeat, rushes to his better’s aid. Out of nowhere, however, Tony Nese streams down the ramp and wipes out Carillo completely. The pair, a microcosm Two Man Power Trip if you will, then rein down nothing but pure punishment on Dorado and Carillo.

The pair stand tall as 205 Live goes off the air. There is no doubt that Tony Nese’s reforming of his alliance with Gulak is quite the shock. It keeps Nese relevant in a scene that could have quickly passed him by. But this inclusion of Dorado into the Championship picture was something I never knew I needed in my life! Even if his title shot is a flash in the pan, Dorado has put in enough work for management to take notice of a wrestler who has been nothing but a bit part player for far too long.

Check out the latest Ricky & Clive podcast! Your two favourite podcasters from West Dunbartonshire, Scotland, return to your ears this week with discussion of NXT UK Takeover: Cardiff. It was a busy Saturday for wrestling, with stiff competition from popular promotions. But the WWE machine still managed to knock one out of the park with a fantastic night of action for the NXT UK brand. We answer some listener questions regarding to the show along the way. This episode begins, however, with a brand new segment, “Ricky’s Rapid Reactions”, and finishes with easily the worst quiz we’ve ever done. Be warned, this was a Botchamania worthy performance.