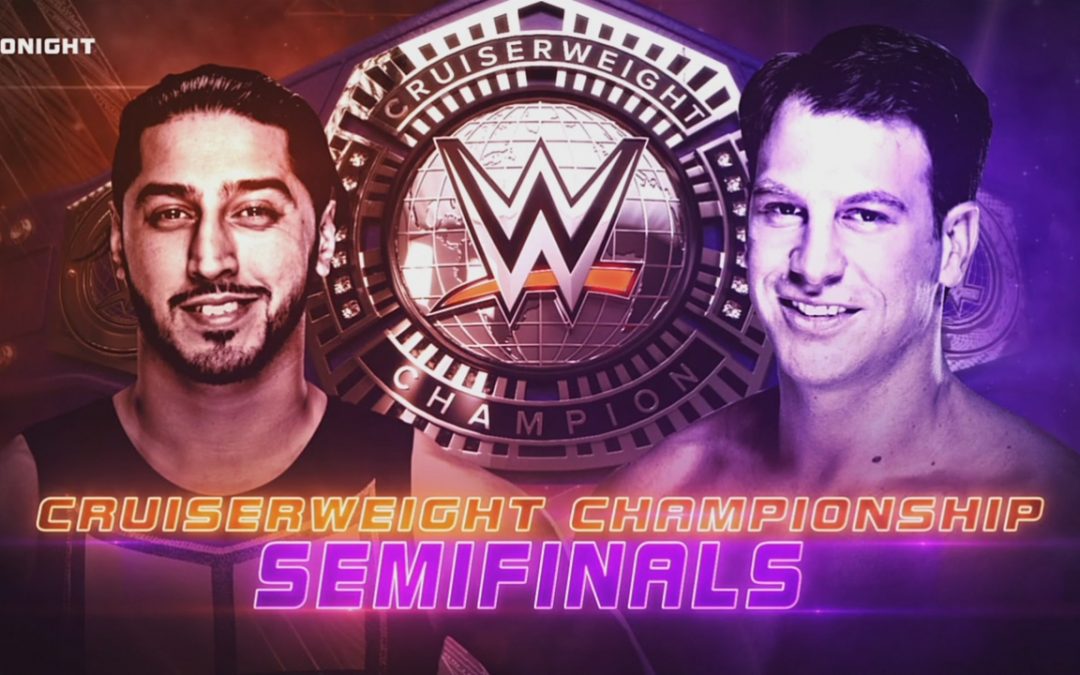 Another week of WWE television has passed, which means we have been gifted yet another high flying and high stakes episode of 205 Live on the Network. While some builds for Wrestlemania 34 have suffered from some creative wobbles, it’s hard to find fault in the Cruiserweight Division’s simple yet effective storytelling on their way to The Show of Shows. This week was no different.

Continuing on from last week’s heated exchange in the rudimentary tag team scene, Lince Dorado and Hideo Itami square off in singles competition. The Cruiserweights are accompanied to the ring by their compatriots, whose cautious stalking of targets in and around the purple ropes during the match is reminiscent of a small-scale Lumberjack Match setting; such are the possible roles that Akira Tozawa, Kalisto, and Gran Metalik could play, should the action spill out onto the floor.

Before the virtually inevitable can happen, however, the familiarity that comes with regular match-ups begins to materialize, with Itami catching on quickly to Dorado’s rope game, quickly stopping the Golden Lynx in his tracks with a deeply rooted clothesline. In amongst this lucha vs strong style display, Itami continues to demand respect from his opponent – literally slapping that demand for favor into Lorado with a barbarous force. Credit to Dorado though, who reciprocates just as savagely, displaying the fiery fighting spirit that has quickly become synonymous with the Lucha House Party.

As is all but guaranteed, Itami is thrown out of the ring and comes face to face with the preying Kalisto and Metalik. Cooler heads prevail in this first confrontation, but not the second time around, as tempers flare when Itami is once again cornered. One of Itami’s reasons for demanding respect could be that his first line of defense is attack, which he demonstrates by pouncing on Metalik. The King of the Ropes retaliates in kind, gifting Itami the win by disqualification. Akira Tozawa and Kalisto manage to diffuse the situation before things get out of hand.

Despite being unfairly blamed for Metalik’s knee injury last week, the Japanese star pounced first this time. Blame is being thrown around as wildly as the strikes between the ropes in this developing rivalry. Both teams have adopted a strong gang warfare and loyalty mentality. And all this before the Tag Team Championships has even been officially announced.

Moving on, after vignettes showcasing Drew Gulak’s change in temperament and motivation of late, and Tournament finalist Cedric Alexander’s drive to become the Champion above all else, ardent fans of the Cruiserweight Classic see the returning Kenneth Johnson take on TJP.

Unlike Alexander, the inaugural Cruiserweight Champion explains on a pre-taped video how he doesn’t care about Wrestlemania, and just wants to mow his way through the competition to get a Title opportunity in the near future.

This goal-driven Perkins looks comfortable but clinical against Johnson. Nevertheless, his cockiness works against him for a short spell as Johnson briefly mounts some typical underdog offense. This doesn’t last long, however, as TJP lands the Detonation Kick, then further adds insult to injury by applying and holding his Inverted Kneebar way beyond the referee’s signal for the bell.

The final vignette of the evening continues the simply excellent story of Mustafa Ali’s lifelong fight against adversity, something which he has carried with him into this Tournament.  Ali’s in-ring character performances, the hype videos, and the quietly competent commentary team in Vic Joseph and Nigel McGuinness should all be applauded. The job they have done in making the WWE Universe desperate for Ali to win the Tournament is highly commendable.

Before the main event, with Tozawa and Kalisto’s successful pull-apart stopping an all-out riot earlier in the show, a livid Drave Maverick decides to reward the two neutralizers with a Number One contender opportunity. This will be in the form of a Fatal Four Way match on next week’s show, along with TJP and Buddy Murphy. The winner of the bout will face the soon to be crowned Cruiserweight Champion, some point after Wrestlemania.

Firstly, this may be something I have missed before, but Mustafa Ali comes down the ring in an attire that is complemented with the purple color scheme that 205 Live is based around. This was a nice homage to the Cruiserweight Division by Ali, whether intentional or not.

In the match’s early stages, a call-back is made to the two men’s feud in the Spring of 2017, as Gulak wags a finger at Ali who tries to up the pace with his trademark acrobatic arsenal. He disciplines Ali further by moving out of the way of an aerial attack, resulting in Ali’s crash landing. What follows is a devastating lariat by Gulak, who makes his wish for a ground-based match clear for all to see.

The story that begins to bloom in this bout, again accentuated by the commentary team, is that Ali has fought monsters all his life. Being in this mindset to an extreme degree these last few weeks means Ali has to be careful he doesn’t turn into one of the monsters he is so vehemently opposed to.

Unfortunately for Ali, this transformation looms near. In what becomes a ring-side brawl, he quickly loses all inhibitions by throwing the top of the commentary table to the side, with the intention of delivering untold damage to Gulak.

The worry that a no-contest ruling intensifies. The two men battle each other to the point of exhaustion. Gulak’s hatred for Ali is so strong that he breaks a near-complete ten count, purely to go out the ring and inflict more pain upon his downed opponent. Once Gulak feels he has done enough, the referee once again comes close to counting Ali out.

Thankfully Ali comes to his senses. What follows is the spirited comeback that we initially saw in his first round match with Jack Gallagher; that of a man who will stop at nothing to stand up for himself, and everything he believes in. Ali brings the violent encounter to an end with his signature Tornado DDT, and the visually stunning “O-Five-Four”.

In the post-match interview, Ali reassures the fans that he hasn’t taken this journey alone. Not only is Ali going to Wrestlemania, but every one of his fans is too.

Another episode of 205 Live is in the bag. Frankly, I’m a little sad that there will be no more Tournament matches for the next two weeks. However, the dynamic between the two “babyface” finalists will be a compelling avenue to explore.