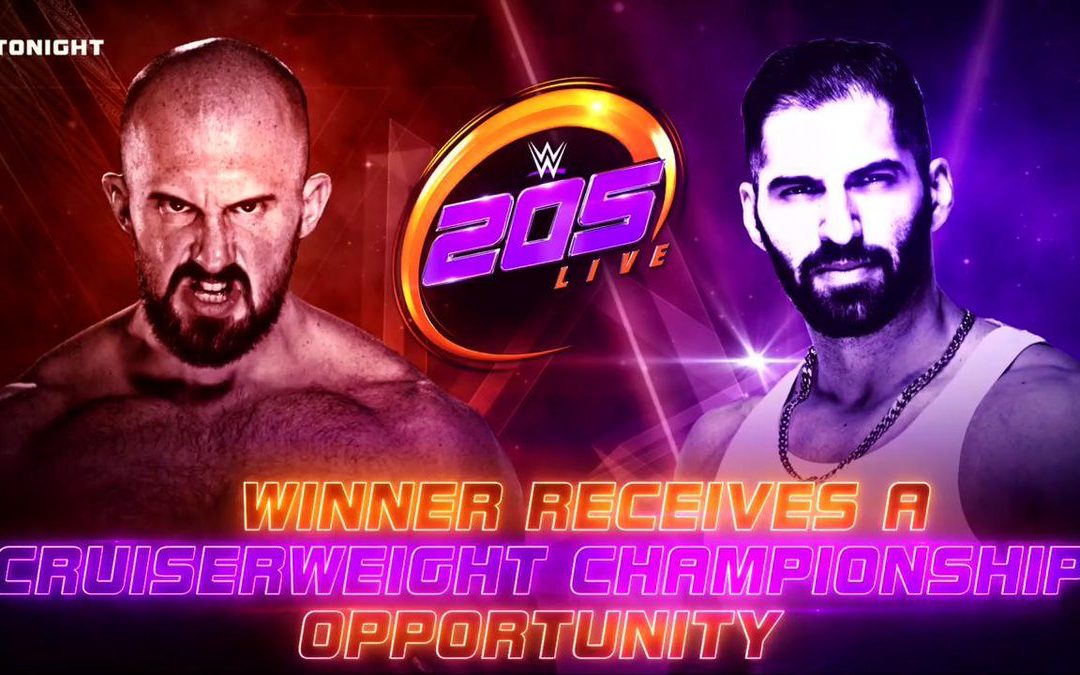 On this week’s episode of WWE’s Cruiserweight Division show, Drew Gulak opens the show backstage behind a podium. He announces that Oney Lorcan will take on Ariya Daivari to determine the next challenger for Tony Nese’s Cruiserweight Championship.

Elsewhere on the show, Gulak looks to provide his student, Humberto Carillo, with another lesson. After attacking Carillo on last week’s 205 Live, Gulak was, in turn, assaulted by long term graduate, Jack Gallagher. Where will Gallagher’s alliances lie? Will Gulak’s tyranny be his undoing?

Jack Gallagher joins us from Instagram. He is unable to appear on 205 Live in person tonight but is still able to offer an explanation as to why he attacked Drew Gulak last week. What has Drew Gulak done for Gallagher? He has long suspected Drew of using him to further his own goals, and costing Gallagher his, including his match against Carillo last week. Drew may not have valued Jack as a friend, but he will respect him as an adversary. Interesting times ahead! Gulak vs Gallagher in the future? Sign me up!

With the match officially underway, Gulak gets things off to a typical start with a headscissors takeover. He taunts Carillo due to the ease with which he repeatedly gets the better of Carillo. He isn’t taking Carillo seriously, though. Not the best move on Gulak’s part, especially when Carillo begins to display the benefits of his tutelage with technical prowess of his own and a crucifix pin attempt.

This wakes Gulak up to the danger at hand. It’s too little too late, however. Carillo incorporates his own luchador style into proceedings and takes Gulak to task around and eventually outside the ring. Carillo climbs atop a corner post, but Gulak looks up, clearly ready for whatever may happen next. Carillo simply waves down at his teacher, as Gulak looks up, frustrated. Gulak orders Carillo to come down and get in the ring. He climbs up onto the apron and looks to admonish Carillo further, but receives a kick to the face for his troubles. Gulak advances. Carillo cartwheels away from him and into the ring.

Carillo heads towards the adjacent corner, using the turnbuckle to assist him in an enziguri to Gulak on the apron. Gulak rolls into the ring, but Carillo follows up with that beautiful handstand-springboard assisted arm drag of his to Gulak. The Philadelphia stretcher looks to be in trouble, but his ring intelligence comes to the fore as he trips Carillo up from the top rope. Gulak stomps down on Carillo now. He looks to manipulate Carillo’s finger joints, but Carillo reaches the ropes.

Gulak now has Carillo in a modified figure four, negating Carillo’s leg power should any future high flying moves come to be. A smart move by Gulak. He clubs Carillo’s chest with the move still applied and goes for a pin also. Carillo powers out, but Gulak keeps the pressure on with multiple pin attempts. He now has Carillo in a surfboard variant, pulling on Carillo’s chin instead of his arms. Carillo wriggles free but finds himself in a basic chin lock, which looks expertly applied, I have to say!

Carillo begins to acquire a second wind, warding off Gulak’s advances with a series of blocking elbows and dropkicks. He connects with a standing moonsault and earns a pin attempt of his own. Another handstand springboard follows. This time, an elbow is the end product. He follows with a top rope shoulder charge before another pin attempt. That was very nice; a flashy move, but with enough impact to make it worthwhile.

The back and forth intensifies between the pair. Roll ups and counters follow in quick succession. Fatigue is starting to set in. Carillo has Gulak down in the ring. Gulak is up quickly, but just in time to eat a visually stunning missile dropkick from the tall and widely framed Carillo. The young superstar’s aerial offense is becoming more hard hitting by the week. A joy to see.

Carillo attempts a springboard enziguri, but Gulak catches the leg and applies an ankle lock. Carillo rolls Gulak up for the pin, but Gulak has the lock applied throughout, rolls through, and reinforces the hold. Excellent work from Gulak. Carillo panics and breaks the ropes. Gulak hoists Carillo up to the second rope, and…… joins him. Ladies and gentlemen, I have told you time and again. When Gulak leaves his feet, it means nothing but bad news for the Philadelphia stretcher.

Carillo kicks off the intended superplex. Gulak falls to the floor. Carillo follows up with his spinning springboard moonsault finisher. The referee counts to three, and Carillo wins.

There is a bitter irony in the outcome of this match. Gulak has been looking to impart his knowledge upon Carillo on how to become a better wrestler. Whether fictional or not, this has been evident. Carillo has improved leaps and bounds these past couple of months. Gulak, however, fails to learn his own lesson. A lesson he never learns from. Drew Gulak should never leave the mat! Nevertheless, a great match. My harsh opinion on Carillo softens by the week. Working alongside Gulak and Gallagher has been an inspired move.

Up next, Ariya Daivari and Oney Lorcan are in separate backstage areas, giving their own reasons for why they will be the next Cruiserweight Championship challenger. Their match is up soon.

205 Live General Manager Drake Maverick is backstage with Mike and Maria Kanellis. Maverick is berating the pair for their inexcusable behavior in last week’s fatal 4-way match. Brian Kendrick appears, bemoaning the Kanellises costing his friend, Akira Tozawa, the victory last week. Kendrick offers no explanation as to why he interrupted the pair, saying it was just a distraction. Akira Tozawa appears out of nowhere and assaults Mike. The tables have finally turned for Mike and Maria as they get a taste of their own medicine! Also, Tozawa was wearing street clothes. It looked very odd…

Before the main event of this week’s 205 Live gets underway, Tony Nese comes down to the ring. The Cruiserweight Champion is here to scout his future challenger. He won’t be joining the commentary team, but no doubt this isn’t the last we will see or hear from Nese this evening.

A feeling out process starts the match. Daivari looks for a quick get-out with his hammerlock lariat finisher, but Lorcan simply does not entertain that idea. He tries again, but Lorcan counters with a half and half suplex attempt. Daivari scurries out of the ring, sizing up Lorcan through the ropes.

Lorcan has the early advantage with a series of prone headlocks and pin attempts. Daivari looks to break free, even counter with roll up pins of his own, but Lorcan is too determined to not fall foul of Daivari this early. Daivari eventually breaks free of Lorcan’s grip, but earns three consecutive inverted atomic drops, sending him to the outside. Lorcan runs the ropes and looks to dive out, but Daivari meets him in the ropes with a club to the back of his head. Lorcan spills to the outside.

Daivari throws Lorcan back into the ring. He rocks Lorcan with a powerful Irish whip into the corner. He then stomps on Lorcan in the middle before taunting the crowd. He lands some chops, but this seems to charge Lorcan up. The Boston Butcher fires back with some chops of his own but becomes entangled in Daivari’s arms. He goes down thanks to an inverted DDT.

Another Irish whip by Daivari, but Lorcan comes back with an elbow. And another. He charges Daivari at the ropes, but Daivari hauls them down, Lorcan crashing to the floor outside. Daivari follows behind, throwing Lorcan around the ringside area. He is yards from Nese, who advises Daivari to keep focused on the match, and not him.

Daivari is in control now. He has Lorcan floored with a sleeper variant. Lorcan is fading. He manages to get to his knees and grabs the ropes. Daivari pulls him off the ropes straight away. Lorcan panics. He catapults off the middle turnbuckle and flips over for a pin attempt. It’s unsuccessful but earns Lorcan some respite at least. That breather is extended after a suplex from Lorcan.

Lorcan’s adrenaline is now surging. European uppercuts. Chest chops. Clotheslines over the top ropes. he is firing on all cylinders. Daivari has a small window of offense, but another uppercut in mid-air rocks Daivari. Lorcan follows up with a blockbuster delivered at   speed. That was incredibly rapid. Lorcan’s momentum is stunted almost immediately, however. Daivari locks in the sleeper hold, putting Lorcan in danger again.

The crowd is behind Lorcan now. He powers out of the hold, slaps Daivari repeatedly in the face, and follows with a brutal uppercut. He takes Daivari to the top rope. He tries for his half and half suplex, but receives an elbow to the head for his troubles, spilling to the mat. Daivari attempts a frog splash, but meets the canvas instead, as Lorcan moves out of the way.

The end of the match is in sight. Lorcan advances with more uppercuts in mind, but Daivari blocks him with a superkick. This time, the frog splash connects. He   with his hammerlock lariat finisher, turning Lorcan inside out. The referee counts to three, and Daivari is victorious.

This was a slugfest  but still struggled to get out of second gear, despite Lorcan’s best intentions. Daivari winning, I imagine, is not a popular choice, but credit should be given where it is due. Daivari has had an impressive 2019, as far as results are concerned, at least. One person who has had a better calendar year, however, is his future opponent. Tony Nese proffers a congratulatory hand after the match, but Daivari rejects it. The pair square up as Tony Nese raises the title.

Again, Daivari as challenger isn’t the best option available. However, this tells me that Nese will be successful in defending his title this time around. Cementing your reign with “Challenger of the Month” matches is a tried and tested formula, and will do wonders for Nese going forward.

Our latest Ricky And Clive Wrestling Show podcast is now available for download. The second match of our Quiztime Invitational’s first round has arrived! Rey Ca$h and Kyle Moores of Chairshot Radio’s Outsider’s Edge podcast put their friendship to the side (not really) as they battle it out for wrestling trivia supremacy. Check out the other first round match here.