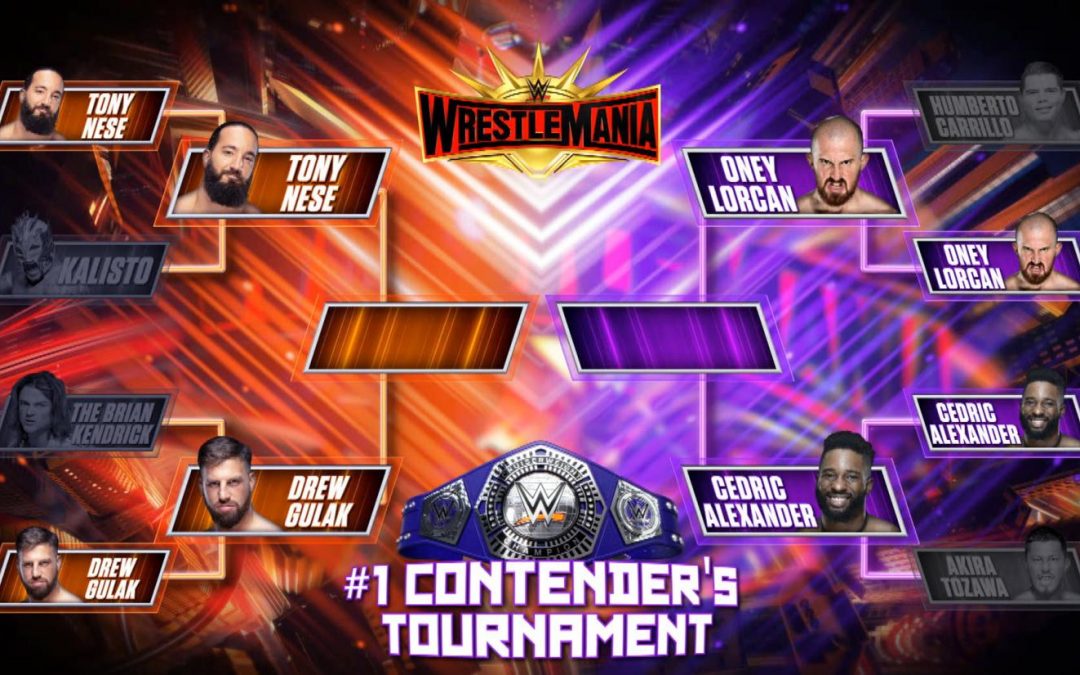 With four episodes left of 205 Live until Buddy Murphy defends the Cruiserweight Championship at WrestleMania, we’ve now reached the semifinals of the tournament that will determine who faces The Juggernaut at the Show of Shows.

This week, in a surprising change to the format, the semifinalists are the ones introducing us to the show by way of promos to hype each of their matches. Does 205 Live veteran Cedric Alexander have what it takes to dispose of NXT’s Oney Lorcan, a man who holds no personal ill will towards anyone, but is hell bent on snuffing out the Soul of 205 Live? And will we see the same or different outcome in a repeat of last year’s notable tournament match between Tony Nese and Drew Gulak? Will we see a Premier Athlete who has matured and is prepared enough to not be on the receiving end of another merciless beat-down at the hands of The Philadelphia Stretcher?

Nigel McGuinness and Aiden English join Vic Joseph on commentary. They take us to a selfie video from Cruiserweight Champion, Buddy Murphy, who congratulates the tournament semifinalists on their progress so far. Murphy runs through each competitor and their chances of facing him at WrestleMania 35. For him, though, it matters not. For, ultimately, whoever it is won’t be able to stop the Unstoppable.

This match is all but guaranteed to eventually play out at a frenetic pace, but a tentative exchange of wrist locks and similar holds starts proceedings. With the final spot in sight, this feeling out process is understandable. Lorcan’s side headlock keeps Alexander grounded. The former champion wraps his legs round Lorcan’s neck allowing him to escape, but Lorcan answers with two deafening chops to the chest. Alexander recovers with a high dropkick and a pin attempt to give him something of a breather.

Lorcan counters an early Lumbar Check attempt, following up with a European uppercut and an upward lariat. He has Alexander in a rear bear hug, but Alexander powers out and whips round with a forearm to the face. Lorcan is not happy, throwing Alexander into the ropes and meeting him in the middle with a knee to the gut. Another chop rings out. A repeat to the whip to the ropes, but the knee to the gut is coupled with an arm torque, forcing Alexander into an abdominal stretch.

Alexander’s resolve is such that he once again powers out and seems to finally enter second gear. A flurry of offense finishes with a springboard Flatliner, but Lorcan is able to kick out after a long two count. Alexander is nursing his ribs now, but Lorcan is rocked from what just took place. They both find themselves on the top rope, but Lorcan throws him off. He goes for a top rope blockbuster, which Alexander evades, but Lorcan rolls through and floors him with a second successful attempt from the mat.

A failed pin attempt sees a frustrated Lorcan look to lock in his signature half and half suplex. Alexander reverses and attempts a Lumbar Check, but his ribs are too painful from the previous stretches. Lorcan capitalises with a successful half and half, but Alexander somehow kicks out at two.

The pair play cat and mouse for a few moments, both ending up on the apron. Alexander wins the mini battle with a uranagi onto the and takes Lorcan into the ring for an excellent Driver. The pin attempt is in vain, however. Alexander cuts a frustrated figure as he lays punts into Lorcan’s back. He goes to the top rope, but Lorcan hunts him down and risks everything with an avalanche half and half suplex that turns Alexander inside out. Alexander is miraculously able to survive. Lorcan is beside himself, grabbing Alexander’s face and landing slaps.

Lorcan looks to run the ropes, but Alexander grabs his trunks and hoists him up for a Lumbar Check. Alexander covers Lorcan for the pin, and the referee counts to three. Alexander is going to the tournament final.

Somehow, Alexander exhibits superhuman strength to defeat Lorcan. Considering the offense Lorcan had at his disposal, one has to wonder what any of Gulak, Nese, and potentially Murphy, will have to do if they want to stop Alexander from becoming a two time champion.

We see a replay of last week’s attack by Mike Kanellis of his local competitor opponent. Drake Maverick is backstage with Mike and his wife, Maria. Mike runs through his career accomplishments, how he gained respect from everyone he has stepped in the ring with all around the world. Last week’s “competition” was a slap in the face to that respect. Maverick offers, by way of an apology of sorts, a match next week against one of the top cruiserweights in the world. We don’t know who that is as yet, but Maverick warns that there is no room on 205 Live for losers, and Mike might want to consider that in his opportunity next week, as there might not be another one.

Ariya Daivari is up next with a selfie video promo, hyping WrestleMania season, but bemoaning how he is not in the tournament. His biggest asset, turning ordinary guys into superstars, is his biggest detriment. He warns us that one year of pent up frustration is about to be unleashed.

I’m really torn with this one. Personally, Drew Gulak is long overdue a bigger spotlight, but Nese has been on a tear of late. Can’t they both go through and make the final a triple threat instead?

I digress. Back in the match, and the pace is already quick. Nese has an answer for everything Gulak throws at him, including an early Gulock attempt. Nese knows what this chance means to him, and he won’t revert to the same mistakes that saw him on the losing end so often in 2018.

Bravely, Nese looks to be playing Gulak at his own grappling game. It’s paying off so far, but Gulak knows his way out of as many holds as he knows how to apply, and has an answer for most of Nese’s early advances. Nese is still in control, however. His confidence is clearly riding high as he is able to evade Gulak’s strategy.

It takes an ugly and feigned powerbomb attempt that instead sees Nese’s throat meet the top rope to bring Gulak into the match. He delivers a beautiful reverse suplex to Nese, but it should be noted that Gulak could have easily transitioned into his dragon sleeper finisher instead. Gulak is looking to soften Nese up before delivering the final blow.

Nese currently resembles a human pretzel, so tied up is he thanks to the submission prowess of Drew Gulak. Nese wriggles free and drops Gulak with a back suplex, but he is still struggling from the earlier leg holds. Gulak takes advantage and begins to lay heavy strikes and chops into Nese.The Premier Athlete reverses an Irish whip into the corner with one of his own, Nese dropping to the floor for extra velocity that sees Gulak wince and cradle his battered back. It’s not enough, however, to stop Gulak from locking in a modified sleeper shortly after. Nese powers out, though, and builds on momentum with a series of clotheslines and strikes. He hoists Gulak up for a Norther Lights suplex pin, but Gulak gets the shoulder up just in the nick of time.

The pair are on their feet now, and Nese wins the exchange of strikes with a side kick to the midsection. Gulak is down in the corner, and Nese hits a split legged moonsault. The connection isn’t flush, however, affording Gulak the chance to kick out with time to spare.

Gulak must finally see the danger that faces him. Desperate times call for desperate measures, as he leaves his feet and drops Nese with a dropkick. He hauls up Nese and looks for the Gulock. Nese is struggling enough that Gulak resorts to a second tactic. The two powerbombs that follow, however, are still not enough. This is an exhausting display by both men, so hard hitting is the offense.

Nese monkey flips Gulak onto his back out of nowhere, but the subsequent 450 splash from the top rope is a bad idea, as Gulak rolls away from danger. Both men are looking for their signature moves, but neither one can lock them in effectively. Gulak does apply his finisher, but Nese panics enough to ensure the lock is broken.

Gulak finds himself in the corner after a Nese German suplex. He avoids an incoming Running Nese, and finally locks in his Gulock. It’s not looking good for Nese. However, he eventually finds the ropes with his feet. He has enough wherewithal to use this to advantage, floating over and landing on top of Gulak. The Philadelphia Stretcher’s shoulders are entirely trapped now as a result, and he can’t do a thing about Nese’s pin attempt. One, two, three! Nese beats his old foe and advances to the tournament final!

Although I already had a gut instinct that told me Nese will face Murphy at WrestleMania, I was still left guessing several times throughout this match, as Gulak had the upper hand on so many occasions. Nevertheless, Nese’s journey of maturing confidence and ability continues.

In the final, Cedric Alexander will face the man who earned a number of victories over him at the beginning of his own losing streak last year. With that in mind, this could make for an interesting story indeed.

Make sure to check out the latest “Ricky & Clive Wrestling Show“. It’s finally here. The opening bout of the first ever Quiztime Invitational has arrived. Join your quizmasters, Ricky & Clive, as we layeth the quizeth down on Keepin’ It Strong Style’s Joshua Smith and Jeremy Donovan. We put their wrestling knowledge to the test and see who will advance to the semi finals!