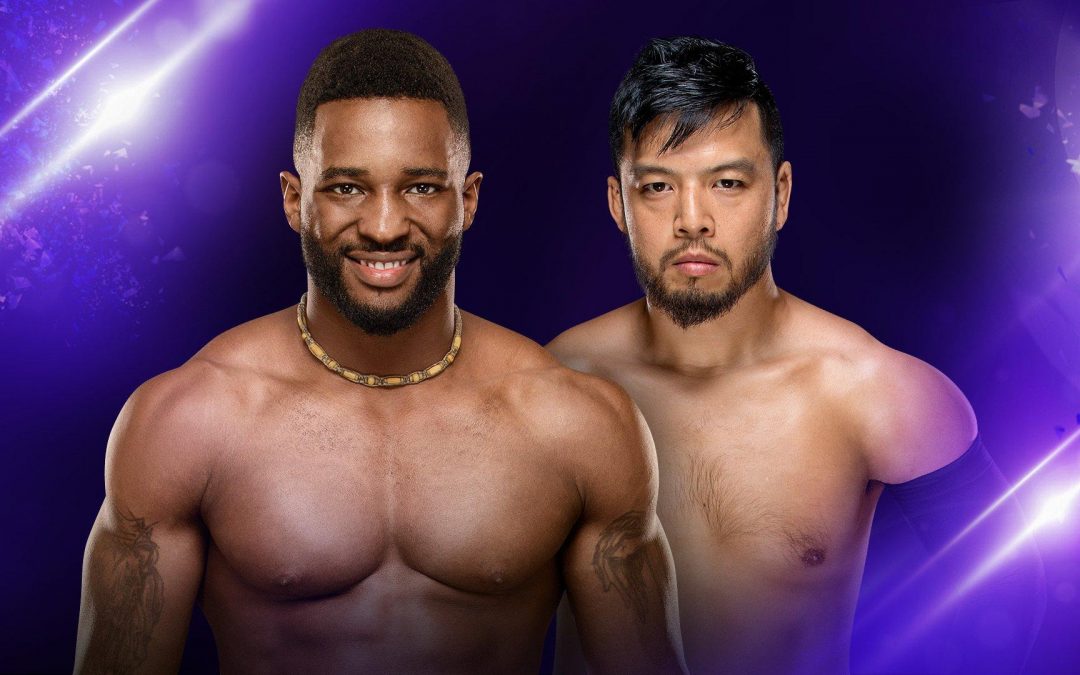 Kalisto and Akira Tozawa last week defeated Lio Rush and Drew Gulak respectively to earn a chance to prise the “Big Purple” from Buddy Murphy’s strong grip in Phoenix, Arizona. Will Alexander’s return of confidence continue? Or will the new threat of Ariya Daivari as unconditional accomplice to Itami be the key to the Japanese legend’s progression?

Drake Maverick opens the show with a recap of last week’s other qualifying matches, as well as a detailed look at the stories of both Alexander and Itami in the build to tonight. Percy Watson and Nigel McGuinness join Vic Joseph on commentary for the evening.

A few weeks ago on 205 Live, Noam Dar took it to Buddy Murphy in a non-title match. After Murphy’s win, a subsequent beat down ensued with the help of his cohort, Tony Nese. Dar looks for a semblance of revenge. It could be for that attack, but it should be for Nese’s attempt at a Scottish accent in a pre-match hype video by the Premier Athlete. His accent is almost as questionable as Drew McIntyre’s!

The match gets underway, and both men struggle to gain a foothold after the initial collar and elbow lock-up. Joint manipulating submissions and vice submissions are swapped between Dar and Nese respectively. Dar mocks Nese’s muscle-flexing taunt before a cheeky punt to the tied up legs.

McGuinness brings up that both men might be frustrated at not being considered for a qualifying spot for the Fatal 4 Way Cruiserweight Championship match. This is a fair point. That frustration could manifest itself in the match as Dar and Nese as the strikes and blows begin to land with more velocity.

Nese has Dar in a body scissors lock which Dar fights out of, but Nese fells Dar with a series of sweeping leg strikes. He locks in a bear hug, again putting pressure on Dar’s core. He follows up with an Irish whip into the corner and charges. But Dar falls to the floor, allowing Nese to career into the turnbuckle. Dar works his own kicks into the match now.

Some headbutts aimed at Nese’s body see Dar come back into the match. A northern lights suplex pin earns Dar a two-count. A brief tussle has Nese look for an escape towards the ropes, but Dar traps him, jumping up and locking in a guillotine submission.

Nese powers out and vaults the ropes to the outside with Dar’s head in tow, the Scot’s neck landing square on the top rope. Nese jumps back over the ropes and lands a springboard moonsault. Again though, the referee only counts to two.

Frustration is building in Nese. He mounts Dar on the turnbuckle and delivers a jarring palm strike to the face. Nese looks for a German suplex into the opposite turnbuckle, but Dar is resilient, sliding down and kicking Nese in the head. Dar runs the ropes to obtain space, but Nese is right behind him and rocks him again with a forearm club.

Nese looks to mount more offense but finds himself in another guillotine lock. He powers out, however, with an impressive northern lights pin attempt of his own. He keeps momentum on his side with a pump-handle bodyslam.

Instead of capitalizing with a pin attempt, the contemplative Nese drags Dar to the corner, seemingly for a Running Nese. Dar turns the deliberation into his advantage with a roll-up pin, earning him a victory over the stunned Nese.

Nese is beside himself in the ring. He only has himself to blame, however. Like Drew Gulak on 205 Live last week, taking his eyes off the ball has seen Nese on the losing side. Does this bode well for his relationship with Buddy Murphy, seemingly based on how easy they can deal with the 205 Live roster?

Clean shaven Brian Kendrick is backstage reading a letter penned by Akira Tozawa, who couldn’t be on the show this week. The letter reads, roughly, as follows: “Dear WWE Universe, this week I took an opportunity to compete in Japan to hone my skills in the lead to the biggest match of my career at the Royal Rumble. I will fight for all the people who believe in me, train harder than I ever have in my life, and go on to beat Buddy Murphy. Sincerely, Akira Tozawa. Hah! Hah! Hah! (yes, this really happened).

As far as Kendrick is concerned, he comments on their weird friendship. He still owes Tozawa and will do what he can to make sure he becomes Cruiserweight Champion. Kendrick seems a shadow of his recent self here. I may be reading into this a bit too much, but is Kendrick up to no good? Time will tell.

Drew Gulak is backstage alongside Jack Gallagher, talking to Drake Maverick. Gulak brings up Maverick’s reputation as General Manager of 205 Live rides on the quality of the new Cruiserweights that will soon come to the show. Both Gulak and Gallagher proffer binders with potential candidates. Gallagher’s is emblazoned with the Union Flag which, considering NXT UK has a number of wrestlers within the 205 Live weight limit, is an enticing prospect. Sadly, I got my hopes up for nothing. Once the coast is clear, Maverick dumps the binders in a (conveniently) nearby bin.

Mike and Maria Kanellis approach Maverick now. Mike asks Maverick why he hasn’t had a match in five weeks. Maverick apologies for the oversight, using time as an excuse. Maria mentions that Maverick is bringing in new talent while not having time for the current athletes. Maria threatens that the new acquisitions better be ready for a fight.

Lio Rush is in a selfie video now, mentioning how Kalisto had help from the rest of the Lucha House Party (LHP) in his win over Rush last week. Rush isn’t going to let that stand, threatening to make things difficult for LHP going forward.

Alexander and Itami circle the ring, eyes firmly locked on each other. Alexander will do well to avoid the possible interference of Daivari, be it by mind games or physical means. An upper hand isn’t gained during a hurried grapple on the mat, and the pair back off to lock gazes again.

Alexander begins working on Itami’s arm. Itami returns the favor after a reversal, but Alexander chops his way out of the threat. Itami delivers two sucker punches and a boot to the ribs, slowing down Alexander’s advances.

Itami continues the assault on the main body with more kicks. Alexander’s quickness wins this skirmish though with some high-speed dropkicks. Alexander is on top for now, but he his nursing his sternum after the early focus from Itami has already done damage.

Alexander is on the outside and, with the referee busy with a bustling Itami, eats a clothesline from Daivari to a chorus of boos from the crowd. Itami continues the punishment by joining Alexander on the floor, ramming him shoulder first into the fan barricade.

Itami takes Alexander back into the ring and begins landing sadistic kicks into Alexander’s back and chest. Itami is relentless, warding off any comeback that Alexander tries to muster. Things aren’t looking good for the former Cruiserweight Champion.

Itami continues to work on the ribs of Alexander, then grounds him after a pin attempt with a deep chin-lock. Alexander fights his way back to his feet and falls to his knees, stunning Itami’s jaw in the process. Another pair of dropkicks allows some separation for Alexander, the brief respite working in his favor as he begins to mount a series of his trademark offense. It finishes with a springboard flatliner, but only a two-count is won.

Alexander goes for a Neuraliser, but Itami follows close behind, smashing Alexander in the chest whilst upside down with a basement dropkick. Itami earns a pin attempt after a fisherman’s suplex.

Itami looks to end things with his finisher, but Alexander forcefully backs him into the corner. Itami counters by guillotining Alexander’s neck onto the apron. Once again, a two-count is the only result.

Both men are tired now as they land labored forearms to each other’s face. Alexander’s speed awards him a victory in this exchange. He follows up with a successful neuraliser this time. Alexander goes for a pin, but the veteran Itami rolls onto his side, meaning the pin attempt is delayed, rendering it useless.

Daivari pulls Itami out of the ring, looking to help Itami regain composure. Alexander wastes no time, however, and somersaults the ropes onto both men on the outside. Itami and Alexander are coiled in the ropes, and a brutal uppercut from Itami sees Alexander rocked. Itami preps Alexander and sends him to the floor outside with a jaw-dropping falcon arrow suplex. The sound of both men crashing to the floor is loud, but not as much as the collective gasp from the crowd. A punishing spot for all involved.

Naturally, Alexander struggles to meet the ref’s ten-count and makes it with barely any time to spare. The match is reaching fever pitch now as any reserves either man has is running out. A hesitation dropkick by Itami is followed up by an attempt at a Go To Sleep variant. A roll through reversal by Alexander is thwarted by a spinning back fist by Itami.

Itami repeats the dropkick and Go To Sleep variant sequence. It is an ugly connection, but the damage is done. Even with Itami losing time in turning Alexander over, he pins him for a three-count and the victory.

The match for Royal Rumble is now set. 205 Live will be represented by Buddy Murphy defending the Cruiserweight Championship against Itami, Rush, and Kalisto. Murphy, who was watching the action backstage, is asked for comment.

The Juggernaut congratulates Hideo. After what he did to Alexander, he might be the most dangerous wrestler on the 205 Live roster. All the cruiserweights are talented, he says. But they are all talented sheep, and he’s the wolf. This wolf is hungry for competition. His competition isn’t with 205 Live, but with history, as he vows to become the best cruiserweight of all time.

He looks to back this up with an open invitation to anyone in all of WWE who meets the 205 lbs weight limit in a non-title match. Very interesting developments. Already I can think of a few big names who could fit that bill. Next week’s show has the possibility of offering us a mouthwatering match ahead of Royal Rumble.

Check out the latest podcast of “The Ricky & Clive Wrestling Show”. Ricky & Clive return to regularly scheduled podcasting this week after a few weeks rest over the holiday period. In that time, however, there’s been no rest for the wicked in relation to WWE. Both on TV and in the news, a lot has happened since we last got together. We discuss it all and see where this could take WWE in 2019. Rance Morris makes a run-in to preview NXT UK’s first ever Takeover in Blackpool this Saturday, and finish with the traditional quiz, as well as a special announcement regarding the podcast going forward!