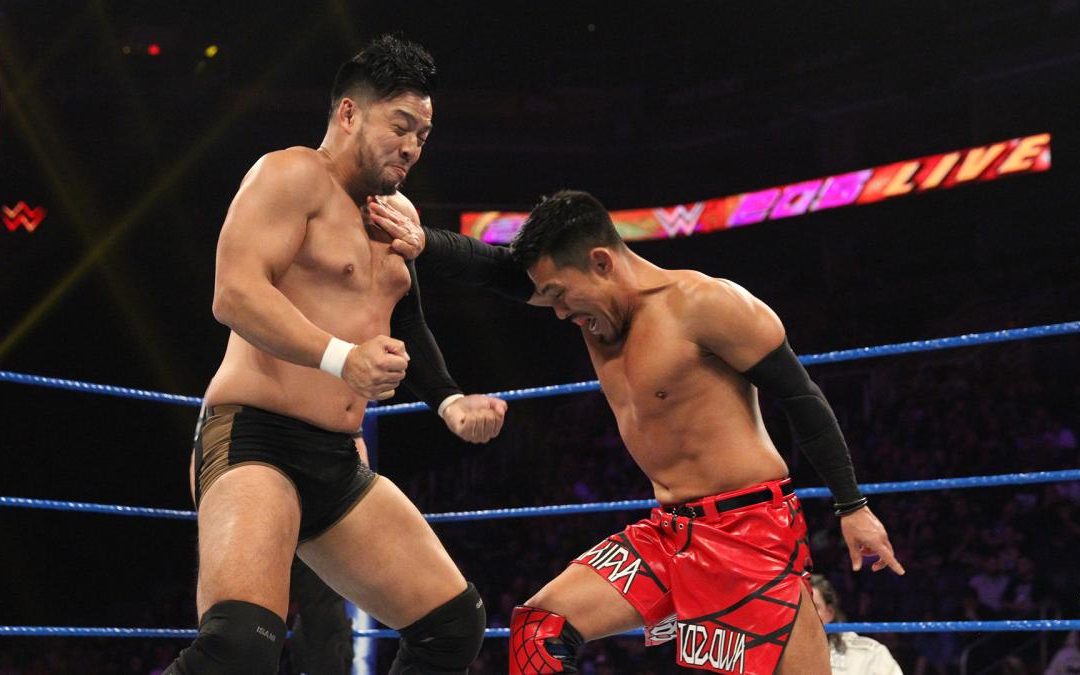 Another WWE “Big Four” is in the bag, and 205 Live was once again represented proudly. Buddy Murphy successfully retained the Cruiserweight Title in dominant fashion, in one of the purple brand’s strengths: the multi-man format.

Akira Tozawa, Hideo Itami, and Kalisto all looked strong in this aerially themed “organized chaos”. Nevertheless, Murphy continues his unstoppable run in a self-proclaimed quest to remain the greatest Cruiserweight of all time. With Wrestlemania on the horizon, tonight’s episode asks: what’s next for the Juggernaut of 205 Live?

The show starts with Drake Maverick’s introduction video, looking back at Sunday’s action. With tonight in mind, Mike Kanellis will take on Kalisto. Can Mike prove to the 205 Live General Manager that he deserves to be featured more? The purple brand veteran will put that to the test. And in the main event, Akira Tozawa will battle against Hideo Itami. This not so old rivalry is revisited, with Maverick hinting at a potential title opportunity for the winner.

Vic Joseph, Nigel McGuinness, and Aiden English are on commentary for the evening.

Maria Kanellis joins the commentary team for this match. Vic Joseph is about to congratulate her for her Royal Rumble match appearance, but the immediate rush of Kanellis towards Kalisto in the ring catches Joseph off guard. Maria begins to bemoan Kanellis’ lack of opportunity on 205 Live, and Mike mirrors this sentiment with unhinged rage.

Kalisto may get some offense in at times early on, but Mike Kanellis is looking to make a statement tonight. The presence of Gran Metalik and Lince Dorado at does nothing to deter Kanellis from his mission. He throws Kalisto around the commentary area like a man possessed.

Kanellis’ game-plan to take out all his frustrations on Kalisto is a simple one. It is effective at first, but Kalisto’s speed and resolve sees him dodge and weave Kanellis back in the ring. He begins to mount a chain of offense that crescendos with an arm drag out under the bottom rope. Kalisto follows up with a suicide dive, but Kanellis lies in wait, using Kalisto’s momentum against him and launching him at full speed, and head first, into the fan barrier.

Kanellis’ frustrations boiled over earlier but, with a calmer head now, he can pick Kalisto apart more methodically. Unfortunately, this change of tact works against him also, as Kalisto rolls him for a two count. Kanellis kicks out, but Kalisto runs the ropes and plants him with a tilt-a-whirl DDT.

The Lucha House Party member looks to capitalize on his momentum, taking Kanellis to the top rope in the hopes of delivering a Spanish fly. Kanellis elbows Kalisto in the head, however, and crashes to the mat, with Kalisto in his grip, in a high impact STO.

Kanellis lays into Kalisto and looks to have done enough damage with a brainbuster DDT. He goes for the pin, but Kalisto is close enough to put his foot on the ropes. Both Mike and Maria are beside themselves. With Mike’s anger boiling over again by the so-called cheating, as per Maria, his powerbomb attempt sees Kalisto counter with another roll-up. This time, the pin attempt is successful.

The narrative of the Kanellis’ not being treated equally on 205 Live played a key role in tonight’s match, with Maria’s audible disgust at how they’ve been treated echoed in the ring by a rage-filled Mike. Kalisto’s resolve and wherewithal were too much for Mike, however, as his and Maria’s inflated opinion of themselves takes quite the blow.

After the commentary type hype the upcoming Worlds Collide Tournament, which will air on the WWE Network this weekend, Drew Gulak and Jack Gallagher are backstage with some words on Humberto Carillo, the newest addition to 205 Live. Bizarrely, the Submission Commission welcome Carillo. They go on to give Carillo “guidance” however, on how best to achieve his goals through a mat based game. They reference Icarus, whose wings were burned as he soared towards the sun. Gulak and Gallagher have offered their ringside services for Carillo’s next match, in the hope of bringing him towards their vision of a Better 205 Live. That’s sure to end well for Carillo…

Ariya Daivari and Hideo Itami are backstage, stating Murphy was lucky to win at the Royal Rumble PPV on Sunday; that multi-man environments afford the eventual winners an easy victory. Itami will look to prove that singles action is where he shines, and that Tozawa will be his unfortunate victim in this message for Murphy.

Next up, footage is shown of earlier in the day, where Noam Dar and Tony Nese are brawling in the parking lot. The fight is broken up by roster members, management, and Drake Maverick. Kayla Braxton is now live with an update, stating Noam Dar doesn’t appear to have sustained any serious injuries, However, with the vicious attack, Tony Nese is indefinitely suspended.

Braxton bumps into Buddy Murphy, whom she asks for comment regarding his friend. The Cruiserweight champion doesn’t condone what Nese did, but only due to it resulting in a suspension. Murphy continues by mentioning how he once again proved he is the greatest Cruiserweight of all time after his win on Sunday. He wonders who will be next to challenge him, but this question doesn’t phase him; finishing by saying you can’t stop the unstoppable.

Tozawa and Itami are joined by Brian Kendrick and Daivari respectively. Knowing how tempers have flared between these two wrestlers in the past, their associates’ inclusion in how things will turn out is all but guaranteed.

The familiarity Tozawa and Itami have with each other, both through their tag team work together and in their time against each other, the start of the match is more of a feeling out process. Itami takes stock and confers with Daivari on how to proceed.

Tozawa has a fire in his eyes since his impressive showing at Royal Rumble, and his striking game gives Itami’s a run for its money.

A flaw of Tozawa’s, however, is his frequent intent to end matches early with his top rope senton. This eagerness is his undoing, as Itami brings his knees up just in time for Tozawa’s back taking the brunt of the impact.

Itami is now on top with a trademark systematic beatdown of Tozawa. Tozawa counters an Irish whip into the corner, but Itami is ready for the incoming Tozawa. The former champion finds himself in the ropes, and Itami jumps from the turnbuckle and lands a knee on the back of Tozawa’s head.

Tozawa is in trouble. Repeated neckbreakers from Itami are taking their toll, and providing him with an easier target. Tozawa punches out of Itami’s grip, runs the ropes, but receives a knee to the ribs at full speed. Itami keeps Tozawa grounded with a chin lock, applying more unwanted pressure onto Tozawa’s tender neck.

Back up on their feet, and Tozawa runs the ropes again, this time able to apply the octopus stretch. The submission doesn’t last long, however, as Itami spins Tozawa round and delivers an inverted powerbomb of sorts.

Tozawa’s adrenaline is surging though. He breaks out a backdrop driver, following up with a shining wizard knee. Itami finds himself on the outside, but no respite is afforded the Japanese Legend. Tozawa soars through the ropes with a suicide headbutt. He throws Itami into the ring looking for a victory, but Daivari pulls Itami to safety.

Kendrick spots the infringement, which he forcefully puts a stop to. He and Daivari square off again as Itami’s chances of winning begin to look in doubt. Things are getting heated on the outside. It is no different back in the ring. An exchange of strikes ends with a huge discuss lariat from Itami, turning Tozawa inside out.

Tozawa is in danger now, Itami looking to apply his finishing Go To Sleep variant, but a Tozawa enziguri begins the fightback. He lies prone on the ropes as Itami reasserts himself, but he dodges an incoming hesitation dropkick, which inadvertently catches Daivari instead.

Tozawa hits a snap German suplex and pulls Itami to the corner. With his third attempt of the match, Tozawa finally lands the top rope senton for a hard-earned victory.

After the match, Daivari enters the ring to help Itami. But a shoulder to lean on is not what Daivari has in mind, as he turns on Itami and delivers his version of the rainmaker clothesline. Itami lies flat on his back as Daivari makes his way to the back.

A very interesting turn of events here. Daivari claimed to respect Itami but made excuses for him earlier in the show in regards to Sunday. Yet another match with multiple people in the equation, and Itami fails to deliver. Daivari’s respect for Itami is gone, but it is something he helped orchestrate himself. It will be interesting to see if this garners sympathy for Itami from 205 Live fans going forward.

Make sure to check out the upcoming “Ricky & Clive Wrestling Show” this Wednesday night on the Social Suplex Podcast Network. Our most recent episode saw us preview and predict the Rumble card. Have a listen and see how close we were with our predictions!