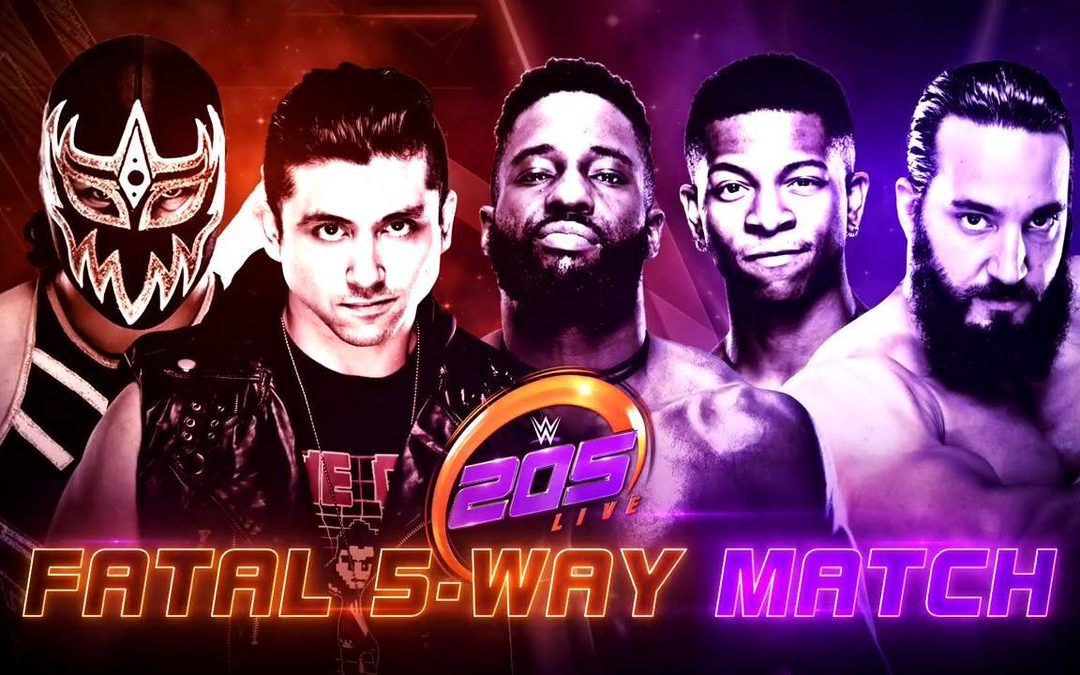 205 Live General Manager, Drake Maverick, gives us a recap of all the big talking points over the last two weeks for the Cruiserweight Division Show. He announces a Fatal 5 Way match in the main event, with the winner obtaining a future title opportunity against the Juggernaut of 205 Live, Buddy Murphy. TJP, Tony Nese, Cedric Alexander, Gran Metalik, and Lio Rush will all battle it out for that chance. Good luck to me in trying to match the pace!

Vic Joseph, joined by Nigel McGuiness and Percy Watson, advises that Cruiserweight Champion, Buddy Murphy, will be here for the show. 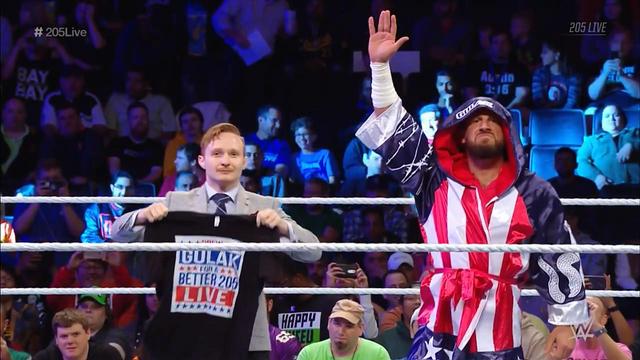 As Tozawa and Gulak, accompanied by Jack Gallagher, head to the ring, highlights are shown of Gulak’s attack of Brian Kendrick two weeks ago. Tozawa is in Gulak’s cross-hairs this week as the Philadelphia Stretcher’s reign of terror continues.

In a callback to their previous feud, Tozawa riles up the crowd more loudly than normal, much to the disdain of Gulak. Tozawa is elusive in the early goings, using his speed and agility to escape Gulak’s experienced grasp. Tozawa must be frustrated with the target Gulak regularly paints on his back as he hams up those characteristics that go against Gulak’s vision of a Better 205 Live.

Gulak is focused, however, slowing things down to his preference and manipulating Tozawa’s limbs in excruciating fashion. He rains clubs down on Tozawa’s neck and lower back, strategically tenderizing the area that Gulak hopes to inflict ultimate damage upon in the form of the Gulock.

Escaping a sunset flip, Gulak powerbombs Tozawa onto the top of his head, but a two-count is his only reward.

Gulak works Tozawa’s neck again, using the referee’s blind spot to his advantage by biting at Tozawa’s ear. Tozawa fights back valiantly, and plays his greatest hits, sending Gulak to the floor. Jack Gallagher checks on his partner, but Tozawa takes full advantage and floors both men with a suicide dive headbutt.

Tozawa has momentum on his side as he rolls Gulak into the ring. Tozawa looks primed to win the match with a top rope senton, but Gallagher upends Tozawa, bringing the match to a close.

After the match, Gulak and Gallagher begin a beatdown of Tozawa. As I would have expected to happen sooner or later, Brian Kendrick comes down! He isn’t there to save Tozawa exactly, more so to exact revenge on Gallagher and Gulak. It just so happens that Kendrick and Tozawa, two men who have quite the history against each other, are now incidentally on the same side. It will be an interesting dynamic seeing Kendrick battle as the lesser villain in the piece going forward.

Buddy Murphy and Tony Nese run into Drake Maverick backstage. Murphy wonders what Maverick has in store for 205 Live’s future, but more selfishly, what’s in store for them. Maverick doesn’t have much in the way of a reply, and the duo walks off, smug smiles plastered across their faces.

Maria and Mike Kanellis film a selfie video. Their reasons for ambushing Lince Dorado last week are vague, what with the couple being so visibly in love with each other (or themselves). They announce that a new power couple has arrived on 205 Live. Vic Joseph announces that next week will see Mike Kanellis vs Lince Dorado.

Hideo Itami is backstage, addressing the camera in Japanese. Once switched to English, he warns Mustafa Ali that he should have shown him respect. Itami vows to end Ali’s career in their Falls Count Anywhere match on 205 Live next week. A pre-taped and very cinematic video shows Ali outside in the rain, saying Itami and he have been on this road for too long. It’s time for that road to end. This should be a great encounter to celebrate the show’s hundredth episode! 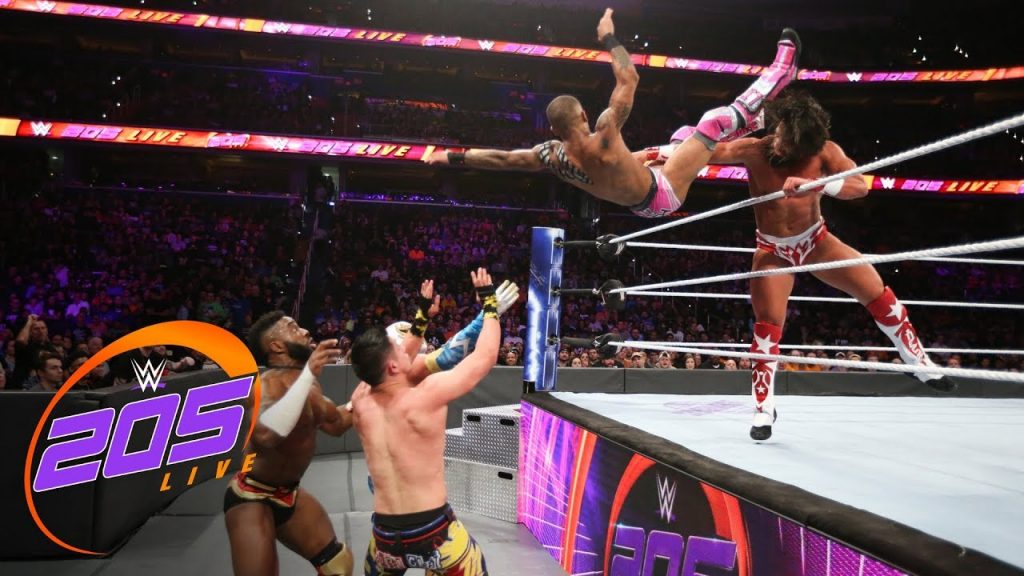 Once all five men have made their way to the ring, Buddy Murphy is seen watching the action backstage.

With Alexander and Nese, and TJP and Metalik, all having their own complications of late, Lio Rush cuts a lonely figure in the ring, but he doesn’t seem to upset at the lack of attention. Alexander spots the gloating Rush though, making a beeline for the double duty Superstar. As his namesake suggests, his speed gets the better of a frustrated Alexander who, upon chasing Rush round the ring, eats a clothesline from Tony Nese.

Nese and Rush are alone in the ring for now. The athleticism on show results in a sizable smattering of applause from the Washington DC crowd. TJP, always one to spoil a party, however, wraps up Rush and Gran Metalik in a double submission, all the while going for Metalik’s mask, hoping to add a final Lucha House Party trophy to his collection.

Nese breaks up the tangle and clears house. He takes time to pose, which the fans do not appreciate. He grinds on Metalik’s head and earns a two-count after a back suplex. The Premier Athlete spots Alexander approach and lays him out before returning to Metalik’s neck.

In a spot we haven’t seen in a while, Nese breaks out the ab-crunching bicycle kicks to Metalik hung upside down in the corner. He may showboat more than required, but with his confidence high after beating Alexander last week, he takes out the former champion with ease once again. Alexander only manages to attack Nese while attempting a pin on Metalik.

Alexander receives a deafening overhead chop to the chest by the King of the Ropes. This seems to only drive Alexander on though, as he lands brutal kicks upon all but Rush, who breaks up a pin attempt. Lio Rush seems popular tonight in this pleasantly vocal crowd.

A number of high spots ensue. The initial intended targets of those in the air may dodge the oncoming attacks, but there is always someone behind the dodges and ducks who end up the poor unfortunate souls. Again, the WWE Universe show their appreciation for the gravity-defying displays on offer by all men. A great advert for 205 Live is on the show tonight!

Alexander looks to rise above the rest of his class, looking to put away Metalik, but TJP weasels in with a cheap shot on Alexander, almost scoring the victory. Nese then has Rush for a pin, but lifts him for a one-handed powerbomb, throwing him over the ropes and onto Alexander, TJP, and Metalik.

Once the action is back in the ring, Metalik climbs the ropes with Nese in his sights. But once again, TJP sneaks in at the last minute and attacks Nese. Alexander breaks up TJP’s inverted kneebar but ends up in the same submission himself. TJP dodges and slithers away from the oncoming Metalik, but as he slides out, Metalik vaults off the top ropes, taking himself and TJP out for the rest of the match.

Alexander nails Rush with a devastating Lumbar Check, but Tony Nese, on what is now an incredible run of form of late, rolls Alexander up for a tight pin and victory. Tony Nese is the next challenger for Buddy Murphy’s Cruiserweight Championship!

Despite Murphy most likely having to face off against his only friend on 205 Live, he is seen backstage looking happy with Nese’s victory. Usually, when similar situations arise, jealousy and competitive one-upmanship takes hold. Do Murphy and Nese have something up their sleeves? Or will Murphy’s cockiness result in a strain on their relationship?

I can guarantee you there was a lot more action than my fingers were able to keep up with in this main event. It really is a case of you checking it out for yourself; thoroughly recommended. There have been a handful of these Fatal 5 Ways now, and maybe it’s just a good dose of “recency bias”, but that may be the best multi-man match we’ve seen on 205 Live.

Check out the latest podcast with me and my co-host, Ricky, as we look at NXT UK’s debut episode in depth!