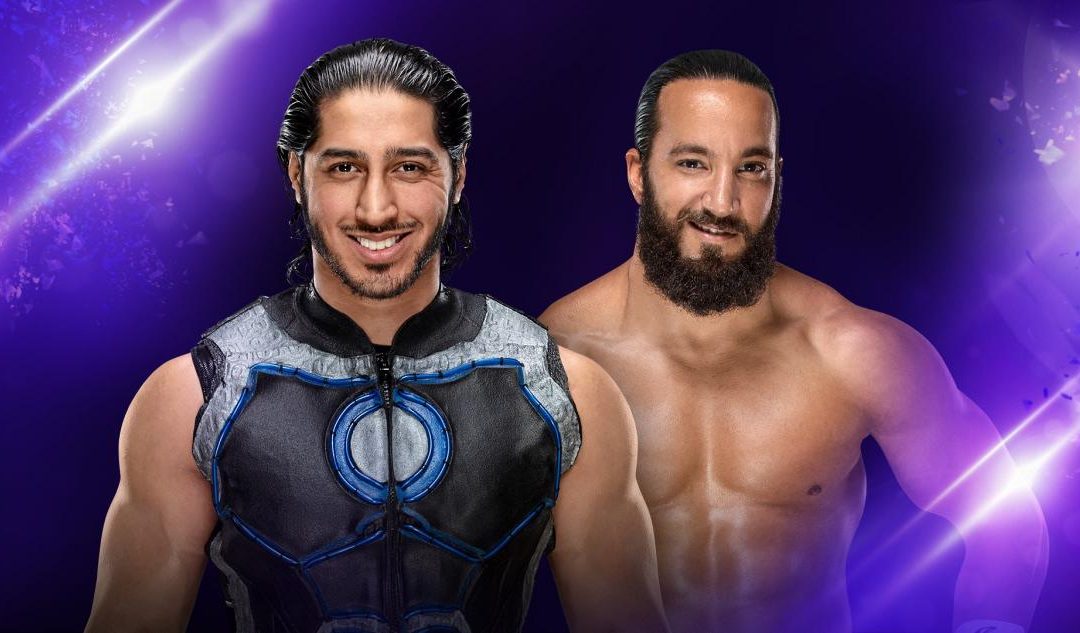 205 Live General Manager, Drake Maverick, congratulates the show on its centenary episode milestone last week, which was celebrated in style with the Falls Count Anywhere match between Mustafa Ali and Hideo Itami. The charmingly hyperbolic Maverick stakes a claim that this week will be even better.

Hype videos are shown next, detailing how Brian Kendrick looks to exact revenge on Jack Gallagher for his and Gulak’s violent betrayal some weeks ago. Then, Tony Nese battles it out in the main event, for a chance to face Buddy Murphy for the Cruiserweight Championship, against last week’s hero, Mustafa Ali.

Vic Joseph is joined by Nigel McGuinness and Percy Watson. They wish us all a Happy Halloween!

During the entrances, a video is shown of Drew Gulak and Jack Gallagher showing no mercy to the man who began to show clemency. Gulak joins the commentary team to voice his concerns that Kendrick wasn’t the same man he met in the early days of 205 Live. With scores to settle, however, I imagine Kendrick will show little mercy against Jack Gallagher.

“Gentlemanly” Jack isn’t phased by Kendrick’s mindset though. A barrage of stiff kicks, clubs, and backbreakers stall any revenge Kendrick will have wanted to exact on Gallagher. Kendrick’s inability to gain the upper hand leaves him frustrated though, amplifying his rage and focus to lock in a Captain’s Hook. Gallagher reaches the ropes, but Kendrick finally gains a foothold in the match.

Both men attempt their finishing moves in quick succession. A failed “Sliced Bread” sees Gallagher back off, but his subsequent advance is met with a Kendrick superkick. Gulak senses danger for his minion in Gallagher, storming to the apron.

Before Gulak can cost Kendrick a clean victory, Akira Tozawa emerges from the crowd and floors Gulak with a spinning enziguri, leveling the playing field back in the ring. the distraction affords Kendrick another Sliced Bread attempt, and this time it pays off. Kendrick pins Gallagher for the win.

It’s still jarring to see Tozawa and Kendrick on the same side of this mini-war. For all they’ve been through against each other, it’s noble of both of them to rely on each for a support that they evidently need if they want to successfully eradicate their current troubles. No doubt this will lead to a tag-team match in the coming weeks. This will be good. It could have been better, though, with some shiny, silver plated titles to fight over though…

Cedric Alexander approaches Maverick backstage, looking for an explanation as to why he wasn’t involved in the Number One Contender match tonight. Maverick says that Alexander will get a Cruiserweight Championship match when he feels that the former champion is ready. Alexander’s current losing streak has Maverick concerned that the locker room wouldn’t feel it fair if Alexander were to waltz right into a title opportunity. Alexander grudgingly acquiesces, before walking off.

After a successful victory over The Revival in their Monday Night Raw debut (as a unit), the Lucha House Party make their way to the ring for Gran Metalik’s match against an enhancement talent who, once again, has no name to call his own.

Despite being no doubt focused on making an impact on Monday night’s the Lucha House Party still have a score to settle with luchador mask hunter, TJP. Metalik challenges TJP to a match in the future, but TJP declined this, citing he already proved he is “the man” in their Cruiserweight Classic final match two years ago.

This doesn’t sit well with Metalik on 205 Live tonight, who makes quick work of his opponent in typical lucha libre style. The match is over in a matter of minutes as Metalik walks the ropes before delivering an elbow for the victory.

Kalisto and Lince Dorado head down to the ring with a celebration in mind and a pinata in tow. But the party is cut shockingly short. TJP storms the ring and, before his stablemates can make their way down to rescue him, makes off with Metalik’s mask. Kalisto and Dorado cover Metalik’s face as TJP sprints to safety. TJP adds another trophy to his growing collection.

Buddy Murphy is backstage with Tony Nese before being approached for comment on his match with NXT UK’s Mark Andrews, when 205 Live comes to Manchester, England next week. Murphy patronizes Andrews, saying he is doing him and his nation a favor. When asked for comment on what if Tony Nese wins his match tonight, Murphy is none too please, and sulks off camera.

Mike and Maria Kanellis are interviewed next, discussing how Mike’s debut match against Lince Dorado on last week’s 205 Live was marred by the heated exchange between him and the non-competing Lucha House Party-goers at ringside. Maria grabs the microphone and changes the narrative of the question. Suddenly, TJP barges in, with Metalik’s mask in hand. After some awkward exchanges, they all go off camera to “talk business”. With both men having an issue with the Lucha House Party, I smell yet another tag team program in the making…

Two linked factors are interesting about this match. Firstly, both these men are riding high with confidence with the emphatic victories they both gained in separate programs recently. And because of these “biggest wins of their careers”, as Vic Joseph puts it, meritocracy dictates that they should have the chance a title opportunity. Sometimes, whoever is next in line for a title shot on 205 Live can be vague, but the simultaneous builds of Ali and Nese as legitimate candidates is appreciated.

Ali’s ribs are bandaged up from his brutal Falls Count Anywhere match with Hideo Itami last week. Nese homes in on the bandages like a bulls-eye, driving his well-defined shoulders into the injured rib-cage. Nese’s soaring confidence continues from recent weeks, as he counters Ali cross-body to the outside with a huge fall-away slam onto the ramp.

Ali manages some minor offense, but Nese’s game plan is clear for all to see: knees and stomps to Ali’s ribs are frequent and forceful. Ali scapes Nese’s strong clutch and attempts a trademark Tornado DDT. But Nese is just too strong for Ali tonight, catching him mid-flight yet again, and earning a two-count with a Northern Lights Suplex pin. Nese is living up to his tagline, The Premier Athlete, with a conviction we have not seen from him before.

The aggressive dominance continues as Nese looks to drag Ali by the hair up the ropes. Ali, however, sweeps Nese’s legs from underneath him, Nese’s head crashing off the turnbuckle. Ali’s offense is ugly tonight, but with momentum on Nese’s side, Ali can’t afford to paint the canvas with the grace and elegance he usually does.

That’s not to say the offense is ineffective, however. A powerbomb and a clothesline over the rope grants Ali his time to shine with a somersault onto the floor. A successful cross-body this time sees Nese kick out at two. It may have been three, but Ali’s nursing of his ribs slows his cover of Nese.

Earning a second wind, Ali sees victory in his sights, as he rains a trifecta of superkicks down on Nese’s head. Again, only a two count is gained. Nese is not ready to lose the momentum he has so impressively built upon these last few weeks.

Both men are exhausted and sprawled on the mat. Ali screams out in pain as he drags Nese into position for the 054. Nese senses the danger and, out of pure instinct, rushes Ali. The Premier Athlete’s comeback is short-lived, however, as Ali bounces back with a Tornado DDT that has the steepest gradient I can remember. Nese is done for, but Ali’s injured ribs slow him down once again as another unsuccessful pinfall attempt occurs.

Another 054 attempt, another black by Nese, this time in the form of an ear-splitting palm strike. The red mist has descended on Nese now, so sick is he of Ali’s repeated attempts to take to the sky. He lands viscous kicks on Ali’s injured ribs to the point that the referee warns Nese to take a step back.

Nese puffs his chest out at the ref. Ali takes this opportunity to take Nese by surprise with a double leg take-down, and a victory roll for the one, two, three!

Mustafa Ali is your new Cruiserweight Championship challenger, ladies, and gentlemen. Nese put in a strong showing, but he was no match for Ali’s quick thinking. After the match, Nese looks ready to attack Ali, but the next in line is saved by Cedric Alexander, who rushes the ring.

As Nese makes his way sheepishly to the back, Alexander helps Ali to his feet. But he does so very forcefully as if setting Ali up for a Lumbar Check. My eyes nearly pop out of my head, but they go back in as Alexander has second thoughts.

Before any chance of a full-on heel turn can take place, Buddy Murphy’s music plays. The Juggernaut of 205 Live seems angry that his friend was defeated tonight. The two pairs stare each other down as the show goes off the air.

So. Three separate segments throughout the show. And three hints of future tag team matches. Could this be a trio of red herrings? Or are we finally moving closer to Cruiserweight Tag Team Championships on 205 Live? Only time will tell. Knowing how often a proper tag division is teased, however, that time may be some way away…

Check out the latest podcast. Ricky and Clive sing the praises of the PPV Evolution and look ahead to what’s in store for the women in the build to Survivor Series, Becky Lynch’s stock in WWE right now after her emphatic Last Women Standing victory over Charlotte Flair. First though, they weigh in with some strong opinions on Crown Jewel, and the WWE audience’s reaction to this Friday’s show in Saudi Arabia. We finish with a Halloween themed Quiz.